The highs and lows of the ‘Elizabeth Line’: Crowd claps as family are told they are ‘the last’ in the queue to see the Queen lying in state – as another ‘gutted’ mourner reveals she missed out after walking the wrong way

A mother and daughter who were the last people to join the queue to see the Queen’s coffin before it was closed said they couldn’t have ‘dreamt’ of their good fortune, but others complained that they had just missed out.

Christine Rogers, 62, and her daughter Sarah, 29, were handed the final two wristbands to see Queen Elizabeth II lying-in-state at around 10.40pm last night.

With an estimated waiting time of nearly eight hours, the pair can expect to file past the coffin just before it leaves Westminster Hall at 6.30am ahead of the state funeral.

Christine, who travelled nearly 100 miles from Ipswich to London, told The Sun that she ‘wouldn’t of dreamt’ of being given the final wristband to access Westminster Hall.

Her daughter Sarah added: ‘It means a lot to get through the queue and pay our respects.

‘She’s been a constant in my life and in my mum’s life so we felt like we needed to come and say goodbye.’

But the pair nearly missed out on the once-in-a-lifetime opportunity to say their final goodbye to the Queen, having gone the wrong way before they eventually found the queue. 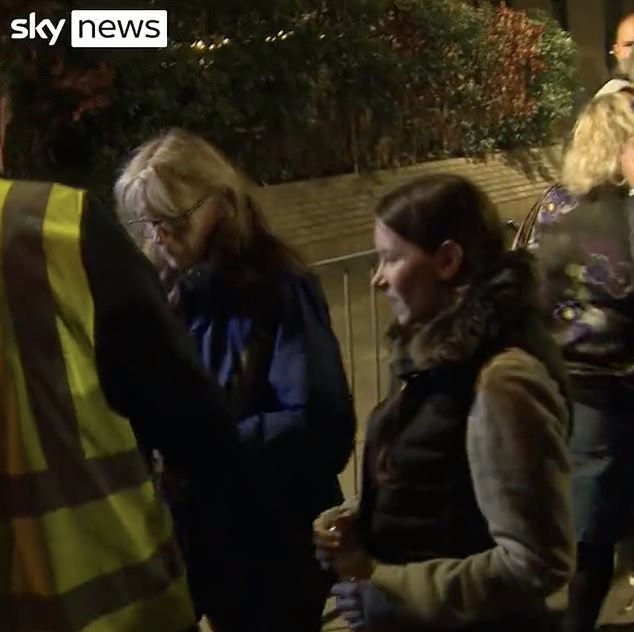 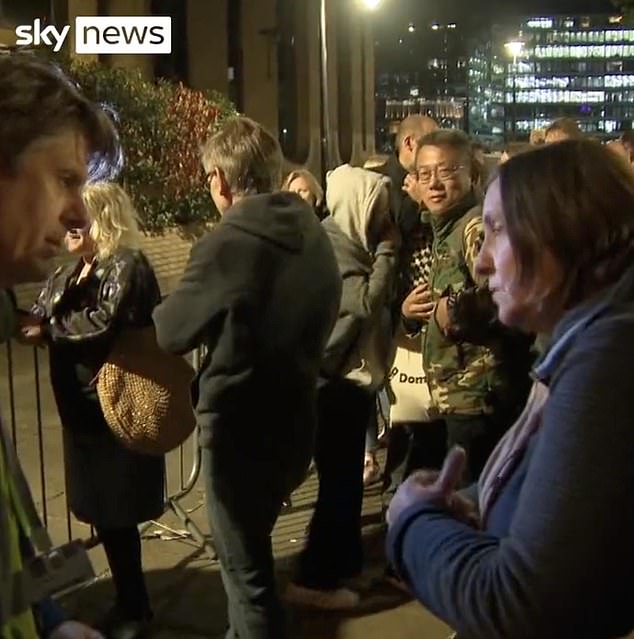 One woman who narrowly missed out on getting to join the queue expressed her frustration to the steward. She told him how her companion was a Scout with ‘learning issues’ and so, with the accessible line having been closed, they had waited until the queue died down

One disappointed mourner who had been waiting for two hours told Sky News that they too might have made it into the queue if they hadn’t got lost. She said: ‘We went the wrong way so if we didn’t go the wrong way we probably would have made it on time. I’m absolutely gutted.

‘It is frustrating because we didn’t have a chance [to come earlier] because of work and other commitments. We just came last minute, hoping, but it didn’t work.’

Another person expressed her frustration to the steward at the line being ended just before she was able to join. She told him how her companion was a Scout with ‘learning issues’ and so, with the accessible line having been closed, they had waited until the queue died down.

But despite the visible upset amongst people who narrowly missed out on a chance to pay their respects, the crowd applauded as Christine and Sarah were guided to the end of the queue.

People had been advised since yesterday morning not to set off to join the queue as it would be closed at an unspecified time as soon as it reached ‘final capacity’.

And at 10.41pm last night, staff from the Department for Culture, Media and the Sport told the public it was no longer possible to join. 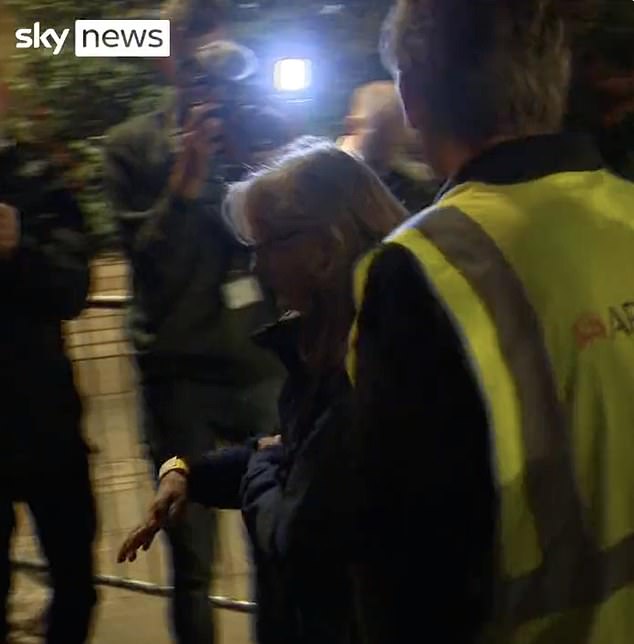 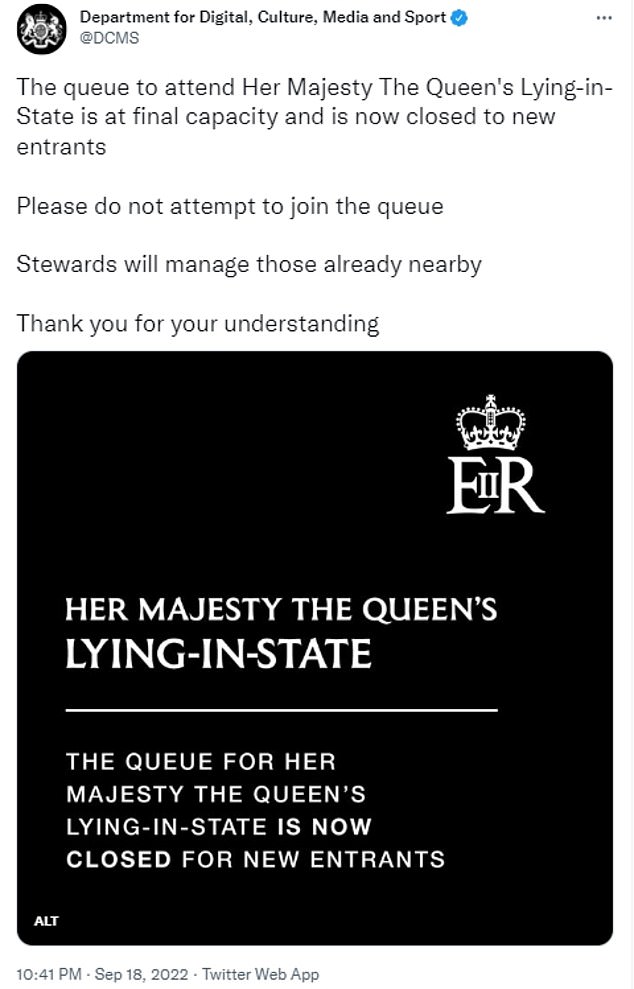 Staff from the Department for Culture, Media and Sport announced the closure of the queue to see the Queen’s coffin at 10.41pm tonight as it said stewards will manage those already nearby

The line officially began on Wednesday after a funeral procession transported the only Monarch most people have known from Buckingham Palace to Westminster Hall and it has allowed people to forge friendships and one budding romance and spawned queues just to get into it.

It now boasts its own Wikipedia page and at its height mourners embraced a more than 24 hour wait as it stretched passed London Bridge from Westminster.

Citizens from every part of British society – including celebrities like David Beckham, who waited 14 hours from 2am in the morning to join it, and a war veteran of 96 who saw the Queen’s grandfather lying in state in 1936, – and the Commonwealth, embraced the long, slow, progress across central London to enter the solemn hall amid freezing temperatures. 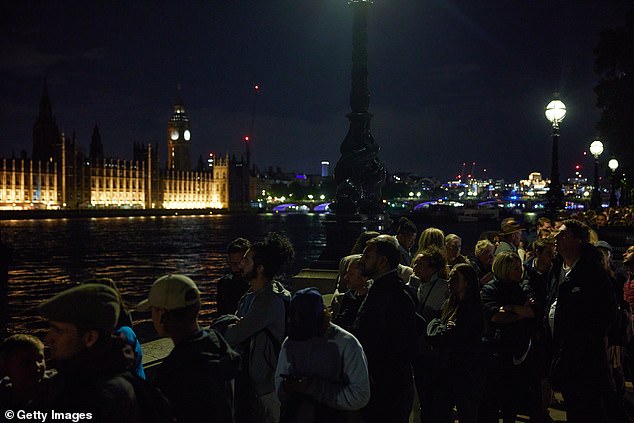 Thousands of people remain in the queue to see the Queen’s coffin, which will remain in Westminster Hall until 6.30am 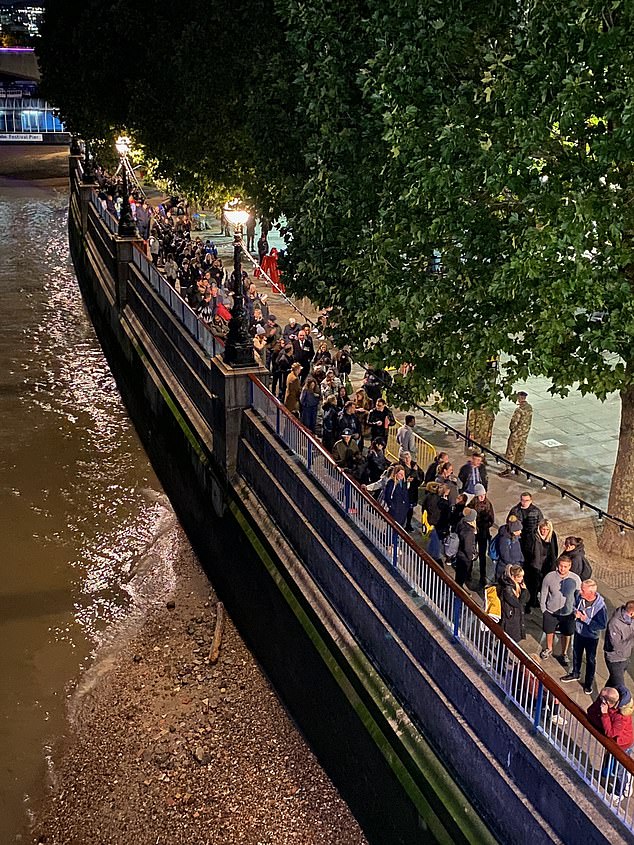 Thousands of people rushed to join today before the the queue was closed at around 10.40pm 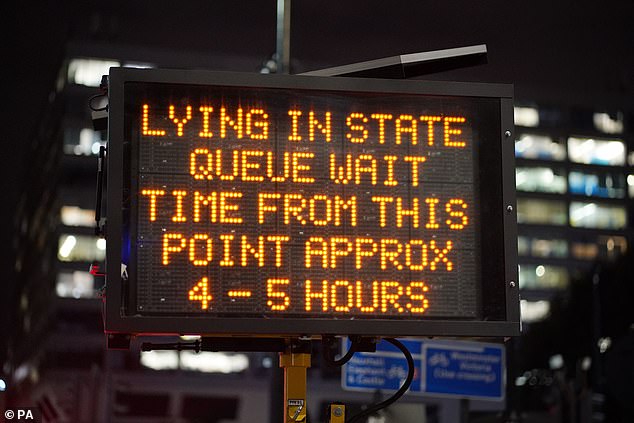 Those who joined the queue at 10.40pm yesterday can expect to wait around eight hours, getting to see the Queen’s coffin just before it leaves Westminster Hall

Those who managed to get into the official queue – where you were given a wristband to keep your place – spoke almost universally about how much the Queen had meant to them personally and had uplifted the nation throughout its most recent crisis, Covid, and its early years where Britain had to contend with a country recovering from a world war.

The queue – which has seemed to conjure up the stereotype that British people are great at queuing and love to do it – also saw a man rush to the Queen’s coffin at the end and hundreds of people being treated by paramedics as they fainted during the long wait. 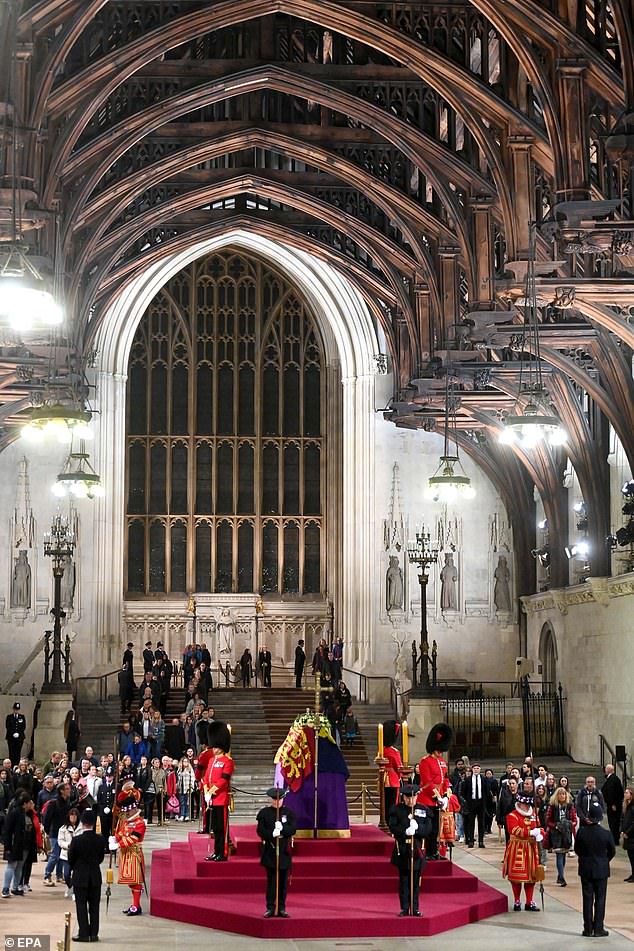 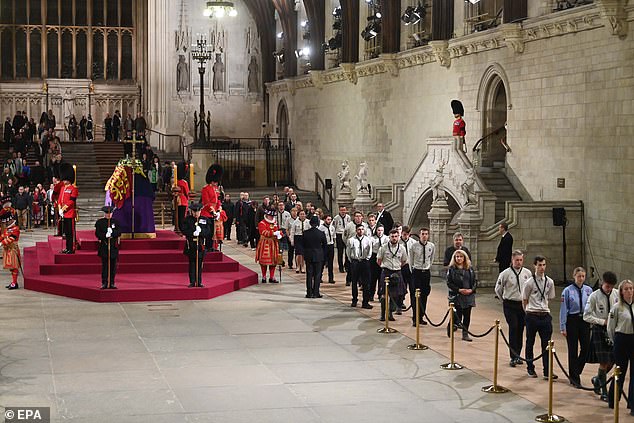 People from across the country, the Commonwealth and the world have paid their final respects to Queen Elizabeth at Westminster Hall 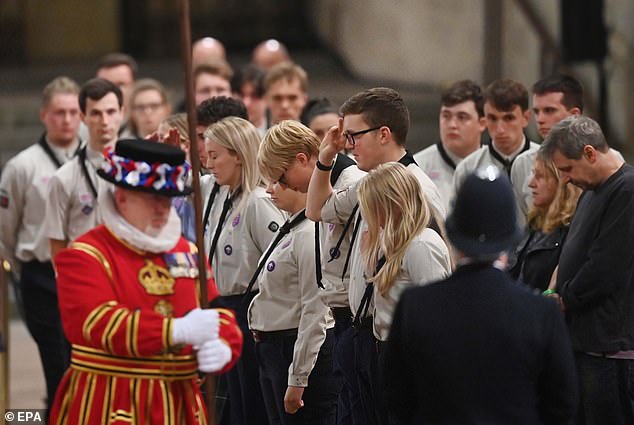 The Prince of Wales said yesterday his grandmother would be amazed at the number of people queueing for hours to see her coffin in Westminster Hall.

The heir to the throne was speaking to mourners in the queue, saying: ‘This is amazing. She would never believe this.

‘Even in death she unites everyone, bringing everyone together, so I hope you’re all chatting amongst yourselves.’

Tsunami triggered by volcano kills at least 43 in Indonesia

As work-from-home windback looms, some are ecstatic and others are ‘grieving’