A May 2021 DailyMail.com video of former President Donald Trump boarding a private jet along with aides who lugged overstuffed boxes on board is taking on new significance amid the Justice Department’s national security probe.

The exclusive video came as Trump and former first lady Melania Trump decamped to Trump’s golf club in Bedminster, New Jersey after wintering at Mar-a-Lago after they left the White House.

DailyMail.com noted in a May 9 report on Trump’s move that ‘aides appear to have carried a number of boxes onto the flight.’

What the public didn’t know at the time is there were tense exchanges between government lawyers and Trump’s representatives at the time over boxes of material from the Trump White House that was taken to his private Florida club.

The video has now resurfaced in light of the DOJ’s investigation, as well as due to its timing – just three days after the feds contacted Trump’s representative to request the return of government materials. 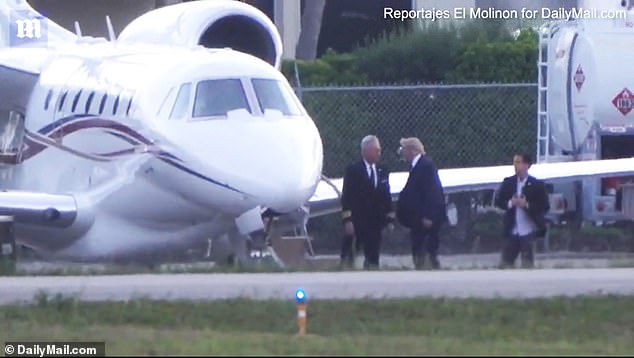 He is immediately followed by a man carrying what looks like a large box of the kind used for documents.

He is in turn followed by a woman carrying another large box with two hands. She appears to refuse a man’s offer of help and loads it onto the plane.

Then a man carries another box, followed by a man carrying roller luggage.

He is followed by a man carrying a tall white box. Another man carries what could be two white boxes stacked on top of each other.

The FBI obtained a warrant to search Mar-a-Lago to search for ‘documents and records constituting evidence, contraband, fruits of crime, or other items illegally possessed in violation’ of statutes dealing with national security information and government records.

The FBI was required to show probable cause in order to get a judge to sign off on the warrant. The feds did not obtain a warrant to search Bedminster or other Trump properties.

On Saturday morning, anti-Trump PAC Meidas Touch reposted the video, writing: ‘Video from May 8, 2021 shows Trump boarding a jet from Florida to Bedminster with multiple boxes bearing a strong resemblance to boxes of top secret materials found at Mar-a-Lago. On May 6, NARA had contacted Trump’s team saying documents were missing and may be at Mar-a-Lago.’

That date represented a moment in a series of contacts where officials of the National Archives sought return of government documents. The back-and-forth would eventually result in a subpoena, and an FBI search of Mar-a-Lago on August 8.

‘We know things are very chaotic, as they always are in the course of a one-term transition,’ wrote NARA chief counsel Gary Stern to a Trump representative. ‘But it is absolutely necessary that we obtain and account for all presidential records.’

Documents returned by Trump, as well as documents seized during the search, have included numerous classified documents.

The feds said the FBI seized 100 classified documents during the August search alone.

Trump’s lawyers in their latest legal filing repeatedly referred to ‘purported ‘classified records,” appearing to suggest that Trump might have declassified them, without stating so outright.

'AGT' singer Jayy triumphs after triple-murder family tragedy: 'I felt like I was listening to your parents. They are here.'