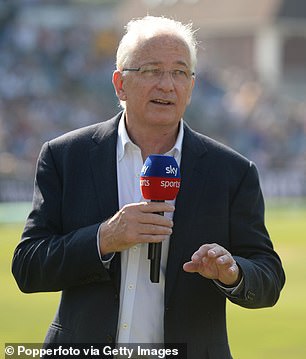 David Gower today urged Lord’s not to throw away the centuries’ old tradition pitting Eton against Harrow and Oxford against Cambridge each year – scrapped from next summer in a diversity drive.

The former England cricket captain, 65, who did not attend any of those schools or universities, is the latest big name to oppose the decision to replace the fixtures in 2023.

The traditional games dating back 197 years will now likely be played on school and university grounds.

But a special AGM has been called for next week – where disgruntled Lord’s members will try to reinstate the matches claiming they were not properly consulted.

It comes after pressure from ‘anti-sexism’ campaigners who protested against the Oxbridge Varsity last summer, demanding the women’s version take place alongside the men’s at the ‘Home of Cricket’.

Mr Gower told The Times: ‘I acknowledge MCC’s plans about inclusivity but history is one of the key elements at Lord’s and the traditional matches, as well as new competitions, should be included.

‘It is perfectly feasible to play both and that is the view of people, groundstaff, who have looked after the ground. The club final and village final, which I attended last weekend, were played on the same pitch, which was almost in the Mound Stand. If you are a club or village cricketer, the edge of the square will do.

‘Sixty years ago there were 92 days scheduled and now there is more amenable turf and the ground drains easily. I am oblivious as to how the club got into this state — I don’t even know who sits on the committee.’ 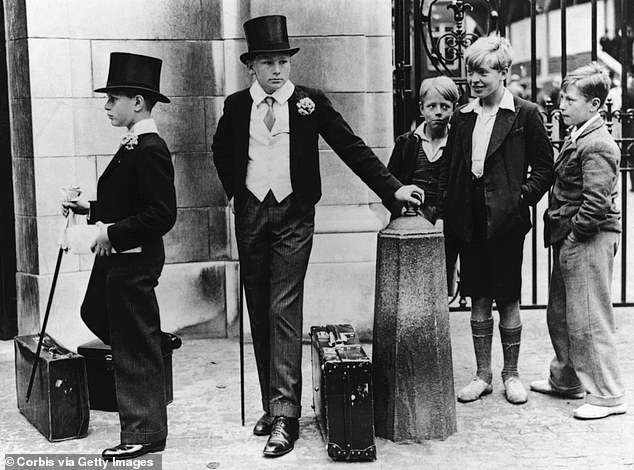 Eton v Harrow first began in 1805 – when Lord Byron played, despite his club foot – and is the longest-running regular fixture at the Marylebone Cricket Club (MCC). (Pictured: Schoolboys arrive for Eton v Harrow match in July 1937) 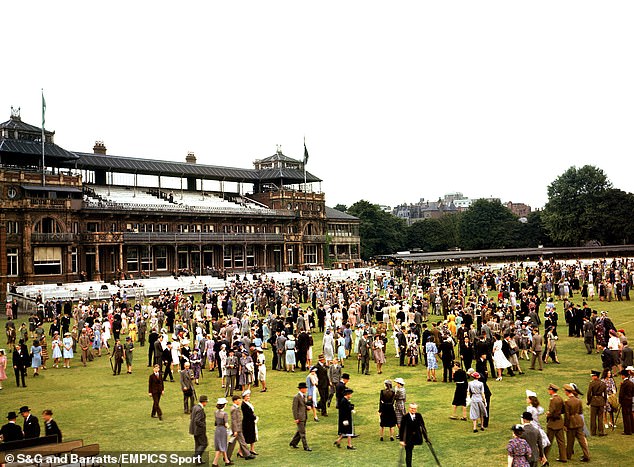 The traditional matches will now likely be played on school and university grounds in the future. (Spectators at a historic Eton v Harrow match enjoy a walk on the outfield during the lunch interval) 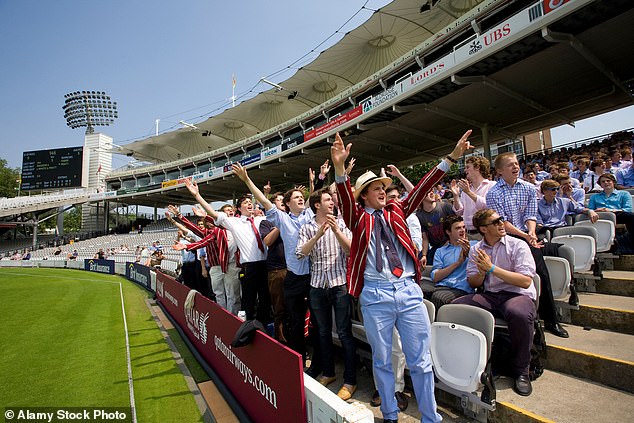 Eton v Harrow first began in 1805 – when Lord Byron played, despite his club foot – and is the longest-running regular fixture at the Marylebone Cricket Club (MCC), while the first Oxbridge Varsity took place in 1827.

The University Match: 197-year-old cricket fixture between Oxford and Cambridge that is even older than the famous Boat Race

When most people think of Oxford versus Cambridge, the image of two boats powering side-by-side down the River Thames comes to mind.

But the two universities actually clashed in cricket before they faced-off on the water.

The first varsity cricket match between the two universities took place in 1827 – two years before the first Boat Race.

Like the Boat Race, it was organised by scholar Charles Wordsworth – who was an enthusiast of both sports.

Students from both sides played a two-day game at Lord’s that year, with neither side able to clinch victory.

The event was held sporadically over the next 10 years, becoming an annual fixture after 1840 – a match which was won by Cambridge. 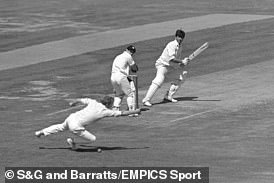 It was traditionally a three-day fixture and up until World War Two was one of the most important cricketing fixtures of the season.

From 2001 the match has been replaced by two fixtures each year – a one-day match played at Lord’s and a four-day first-class fixture played in alternate years at Oxford or Cambridge.

Of the the 176 matches that have been scheduled, Cambridge have won 61, Oxford have won 58, and 56 have been drawn.

One match in 1988 was abandoned without a ball being bowled.

But after almost 200 years, the MCC wants to widen the number of people who get to play on the hallowed turf.

Bosses are opting to stage more finals of competitions at all levels, as well as finding space for shortened versions of the game, such as The Hundred and Middlesex’s Twenty20 fixtures.

Old boys from Eton and the other affected institutions, along with former MCC committee members, branded the move ‘disappointing’ and ‘saddening’ when it emerged in February.

‘These decisions were not taken lightly,’ an MCC spokesman told the Times.

‘We want to extend playing opportunities, broadening the scope for cricketers to realise their ambition of playing at Lord’s.’

Members of the 18,500-strong MCC said they were upset by the news,  claiming they were not consulted on the change.

Cricket commentator Henry Blofeld, who has taken part in both events, told the Times: ‘I suppose the ‘antis’ will be cheering and old farts like me will be sad.

‘It is inevitable with the way that society has moved.’

Oxford graduate Robert Griffiths QC, who was an MCC committee member for nearly 20 years, said he was ‘surprised and saddened’ by the development, adding that it was always believed the two fixtures were ’emblematic and symbolic in reflecting the traditions of the game.’

He added: ‘Maybe the committee should reconsider the game’s historic roots.. diversification does not mean you abandon the traditions of cricket.’

Charles Fry, a former chairman of the MCC, added: ‘I would prefer the club continued with history, as that is what makes Lord’s so special.

‘Nobody spoke to me about it at all.’

Meanwhile John Barclay, a former captain of Eton and ex-MCC president, commented: ‘This is a disappointment but not a surprise and understandable.

‘When I captained Eton in 1970, we did in fact play at Harrow owing to problems over the planned South Africa tour.’

A group called Stump Out Sexism then demanded the Oxbridge Varsity match be banned until they both agreed to put on a women’s game alongside the men’s.

They held a demonstration outside the Grace Gates before the match last year.

They said in a statement at the time: ‘The MCC have control over their own calendar and thus have the power to influence the parameters of fixture invitations and to raise the bar further.

‘We, therefore, ask the MCC to specify that the offer of next year’s Oxbridge Varsity match being played on the main ground is entirely conditional upon both the men’s and women’s teams being involved equally.

‘If the clubs continue to insist that any date should be exclusively for the men, the invitation must be revoked.’ 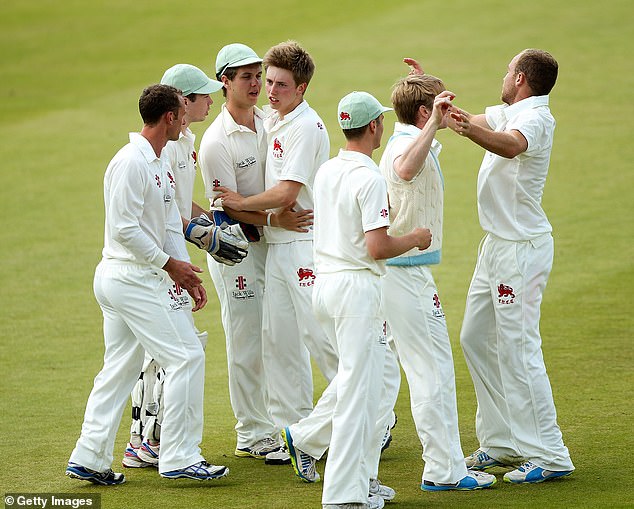 This year, there will be Oxford v Cambridge Twenty20 matches for both men and women, held on the same day in June. Pictured: The Cambridge team celebrate during the men’s match at Lord’s in 2017

The statement added: ‘This should not be an arrangement solely for next year, but rather for all future Oxbridge Varsity fixtures at Lord’s.’

Male Oxbridge students have battled it out on the famous ground since 1827.

But the women’s game has never been played at Lord’s, instead being played at grounds local to the two universities.

Lord’s is arguably the world’s most famous cricket ground and is widely referred to as the ‘Home of Cricket’.

Named after its founder, professional cricketer Thomas Lord, it was fist established in 1817 – though it has moved twice.

It is owned by Marylebone Cricket, who are famous for deciding the rules of cricket.

But is also known as being slightly old fashioned and slow to move with the times.

Members still have to wear suits or tailored jackets with ties in the famous pavilion and there is a ban on fancy dress for spectators – which is unusual when compared to other grounds.

Mother says there's 'no justice' as husband is cleared of abuse