We are, remarkably, still only at the beginning of what already seems an endless parade of royal imagery, printed or broadcast or tweeted. There are days of pageantry ahead, of solemn ceremony, public tears and worn prose, of personal recollections of the time a certain face was glimpsed. Because this is all about the passage of time as much as it is about a person, it makes sense that the most enduring image for me, so far, is one I heard described on that quaint and enduring medium, AM radio. Half a million people crowded Sydney’s foreshore in 1954, an expert said. When the young Queen’s foot touched Australian soil for the first time, there was perfect silence. 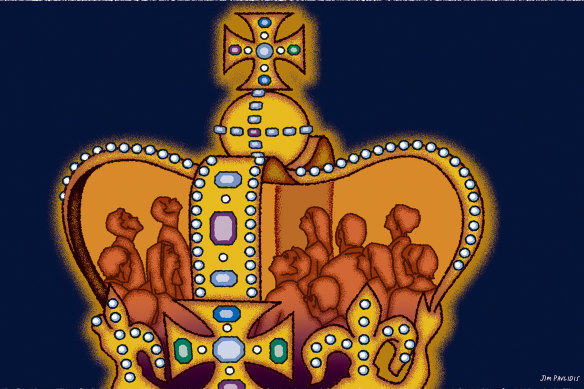 Of course this isn’t true. People make quiet jokes, they gasp, they complain or notice something else and comment on it. They are people. And I may be misrepresenting the expert. Perhaps there was a caveat or two, and in fact I suspect the word “perfect” was not uttered. I haven’t found the audio, and I won’t look for it because I prefer the image in my mind, its concise expression of both scale and awe, its nearness to fable or fairytale, with its simplicity and reference to a royal shoe. Mostly, though, I like its contradictions – the way it is both true and not; the way the crowd is both silent and not; the way the crowd is both human and not – because in these ways the crowd is made to mirror the qualities of the Queen herself.

What has most struck me about the thousands of words I have now read on the subject – of the many million there must be – is how confused we seem to be about the Queen. This confusion does not manifest, as it does with most topics, in arguments, but in consensus: most people (or most of those who feel they must speak) are confused in exactly the same way.

Without her, it seems, modern Britain would scarcely have functioned: she was essential to the nation, to its identity and stability. And yet a key part of the Elizabethan mythology is that her strength was so important because it came at a time when, in fact, Britain scarcely functioned; that she remained steadfast as the nation’s identity fractured and its stability exploded. She was its rock across decades when it would not have been obvious to any outside observer that Britain had a rock at all.

A similar contradiction appears whenever the Queen’s politics are discussed, as the British historian Simon Schama has observed. She was a study in neutrality, apparently, an exemplar of heroic dispassion because that is what her role required. Amazingly, though, she was also always on the right side of history: against apartheid, for women’s rights, for action on climate change.

This in turn has its corollary in the defence offered of her whenever she is attacked as a representative of empire, the murderous and poisonous effects of which were certainly still felt – and practised – during her reign. She did so much for Britain, we are told, but had nothing to do with anything Britain did. In an infinity of phrasings the odd logic is offered: she mattered immensely, despite the fact – or perhaps because of the fact – she barely mattered at all.

This is, not coincidentally, the central drama of The Crown, Netflix’s $100 million series, and surely the greatest act of propaganda of this short century. Wealth, spectacle and nation meet in a single person who is forced, not once but constantly, to choose between herself – her self – and her nation. Her nation always wins. But was it that simple? Isn’t it equally possible that Elizabeth saw that contentment, for her, might most likely lie in supposedly grim duty? Perhaps it wasn’t that she chose one thing over the other. Her genius for royalty, probably instinctive rather than considered, was to recognise the way that one thing always lives inside its opposite, and feeds off it.

Australia is not immune to these confusions. The implausible silence of the Queen’s arrival in Australia was matched by the equally implausible minute’s silence of 90 thousand people at the MCG, not once but twice this weekend. That was the AFL. The AFLW, playing its Indigenous round, observed a minute’s silence in its first match, then cancelled it for the rest, in recognition of the pain caused by the Empire the Queen has represented.

Together these various decisions were perfect, not as artful compromise but as an accurate expression of our country’s chaotic and unresolved relationship with Britain, the monarchy, our past, and the ongoing presence of that past in our lives. And this was there, too – one suspects deliberately – in Anthony Albanese’s fine statement on the Queen’s death. It was full of affection for the Queen and respect for her contribution to Australian life. But there was a clear distinction, too, between the grief of the British people and this nation’s loss, which is of a different order. As a friend put it, it made clear the fact that she both was and was not our queen.

One hope invested in the idea of an Australian republic is that it will help us settle such contradictions: that we will grow up and see past the imaginary world we have constructed. It is certainly past time we stood on our own, but I am not convinced that clarity will follow. Every nation contains fictions and contradictions it prefers to avoid thinking about. A symbol of some sort will always be needed to hold them together – that is what symbols do – and something will present itself.

To say that clarity is unattainable does not mean we should not seek it. Yes, there will always be symbols and fictions, but this risks skipping past the important question of what specific damaging fictions that a specific symbol – in this case one with a focus on wealth, inheritance, class, race and empire – makes possible.

Right now, these fictions, the various contradictions, are still suspended in the air, certainly in Britain and Australia. They were as long as Elizabeth lived, and they will remain so for some time yet. Right now, she is “the Queen”. At some point, this phrasing will fade away. She will become merely “a queen”. When that process is complete, some decades hence, perhaps we will be able to see her clearly, as a specific person at a specific time in a specific institution. Right now, she is still a myth, with all that entails.

Youth, 15, jailed after stabbing 14-year-old to death in 'lynch mob'