‘Why don’t you all grow a pair!’ Piers Morgan calls Dominic Raab a ‘coward’ for prolonging plot oust May as the number of Tory MPs who oppose her Brexit deal grows to 103

Piers Morgan branded Dominic Raab a ‘coward’ and told Brexiteers to ‘grow a pair’ and replace Theresa May if they wanted their own version of Brexit.

The GMB host launched his furious attack on the former Brexit Secretary as the number of Tory rebels against the deal continued to rise ahead of Tuesday’s vote.

Mr Raab insisted changing the Prime Minister now would be seen as ‘political parlour games’ by the public – just a fortnight after the hardline European Research Group of Tory MPs tried and failed to remove her.

The angry clash on GMB came a day after Mrs May suffered the worst day for any PM in the Commons for 40 years with three defeats in quick succession.

Her Brexit deal faces a landslide defeat next Tuesday night. Ex-chief whip Mark Harper became the latest to go public against the plan today, bringing the tally of declared Tory rebels to 103.

The announcement underlines how the vote is moving away from Mrs May ahead of Tuesday’s vote and the tide is not turning as Downing Street hoped. 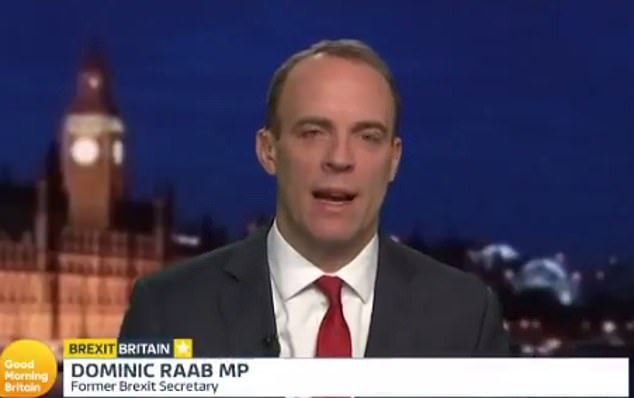 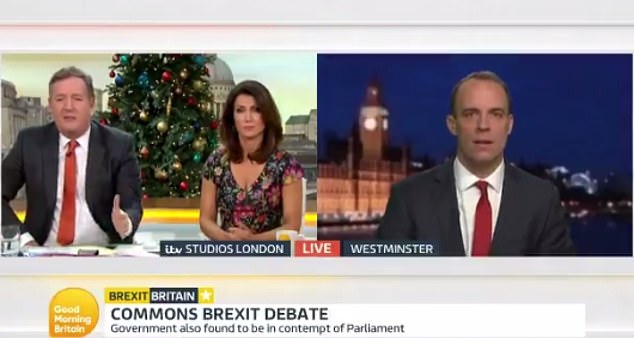 The GMB host (left) launched his furious attack on the former Brexit Secretary as the number of Tory rebels against the deal continued to rise ahead of Tuesday’s vote.

Morgan told Mr Raab: ‘We know – you know, I know – Theresa May is not a strong leader. She’s had her chance, she’s been faffing around for a year now.

63 minutes of mayhem: how May was defeated three times in an hour

Theresa May suffered the worst day of any Prime Minister in 40 years in the Commons yesterday as MPs inflicted three defeats on her in barely more than an hour.

This is how it unfolded:

4.41pm: The first vote is announced on the Government’s amendment to the contempt motion, attempting to kick it into the long grass. Government loses 311 to 307.

4.58pm: The main Labour motion declaring the Government to be in contempt of Parliament is announced. Government loses 311 to 293.

5.44pm: Dominic Grieve’s amendment on what happens after the deal is rejected is announced. Government loses 321 to 299.

5.48pm: Theresa May stands up to make the case for her deal at the Despatch Box.

‘Why are so many Tories right now, given this utter turmoil, why are you still persisting in this ridiculous public position that she’s the only person that can lead the country at this time?

‘Why don’t you all grow a pair and put one of yourselves in charge and actually deliver the Brexit you keep banging on that you want? One of you – do something!’

Mr Raab told him: ‘I think the public would regard it as political parlour games for us to be engaging in a lot of that shenanigans rather than just focussing on the deal.

‘I also think the Prime Minister has every right – and this is why I stepped down – to present her deal.’

Announcing his intentions today, Mr Harper said the PM ‘has to go back to Brussels’ to demand backstop comes ‘out of the deal’ to have any hope of survival.

Explaining his revolt in the Telegraph, Mr Harper said: ‘The Cabinet’s proposals are not acceptable because they threaten the integrity of our country, keep us trapped indefinitely in a customs union and leave us in a weak negotiating position for our future relationship.’ 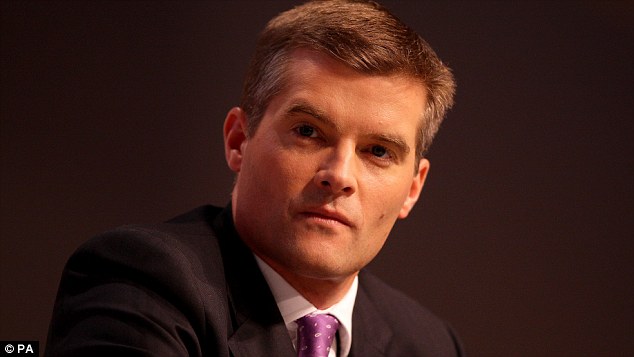 He added: ‘The EU’s proposal would undermine the UK common market and threaten the constitutional integrity of the UK by creating a customs and regulatory border down the Irish Sea, and no UK Prime Minister could ever agree to it.

‘I’m just very disappointed that as a loyal MP I’ve found myself in this situation that in order to keep to the promises we made just last year in the general election I’ve been forced to vote against the cabinet’s proposals.

‘Keeping promises in politics is important and I think many colleagues also feel they have been misled.’

At least 103 Tory MPs have gone public against Mrs May’s deal ahead of the vote next Tuesday night.

With the DUP also pledged to vote against, the Prime Minister is staring down the barrel of a loss by 100 votes or more – far beyond the point many in Westminster think she could have to resign. 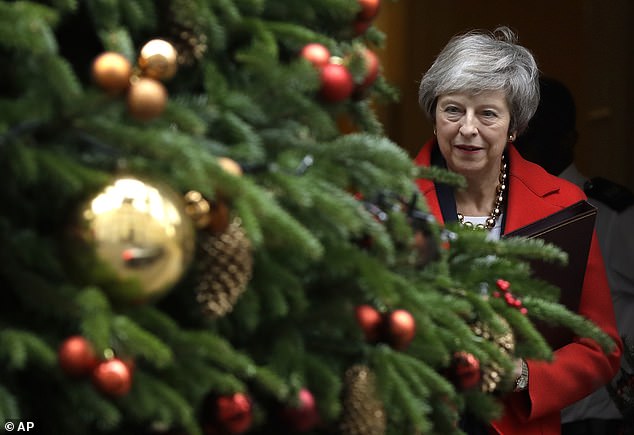 Last night, Mrs May tried to keep her plan alive with a rousing speech to the Commons, in which she warned ‘Brexit could be stopped’ entirely if it is voted down on Tuesday

Last night, Mrs May tried to keep her plan alive with a rousing speech to the Commons, in which she warned ‘Brexit could be stopped’ entirely if it is voted down on Tuesday.

What new powers do MPs now have?

If and when Theresa May’s deal is defeated next week, the Government is required by law to show a plan for what happens next to MPs and hold a vote within 21 days.

This was supposed to be unamendable and a simple statement of what the Prime Minister would do now.

But Mr Grieve and another 25 Tory MPs forced a change in last night’s vote.

The next steps motion can now be re-written, meaning a majority of MPs could call for a second referendum or even a total halt to Brexit.

MPs could also order ministers to pursue a Plan B Brexit based on Norway’s relationship with the EU – a deal much closer than Mrs May’s but which has cross party support.

The instruction would not be legally binding but would have huge political power.

She acknowledged criticism of her ‘compromise’ deal, but said: ‘We should not let the search for the perfect Brexit prevent a good Brexit that delivers for the British people.

‘And we should not contemplate a course that fails to respect the result of the referendum, because it would decimate the trust of millions of people in our politics for a generation.’

In her speech last night the PM admitted that both Remainers and Brexiteers have been left dissatisfied by parts of her deal.

But she said the ‘hard truth’ is that the compromise she has thrashed out with Brussels is the only deal which delivers on the historic vote and protects jobs.

‘Although I profoundly disagree, they are arguing for what they believe is right for our country and I respect that.

‘But the hard truth is that we will not settle this issue and bring our country together that way and I ask them to think what it would say to the 52 per cent who came out to vote Leave, in many cases for the first time in decades, if their decision were ignored.’

The PM added: ‘There are others in this House who would prefer a more distant relationship than the one I’m proposing and although I don’t agree, I know they’re also arguing for what they think is best for our future and I respect that too.’ 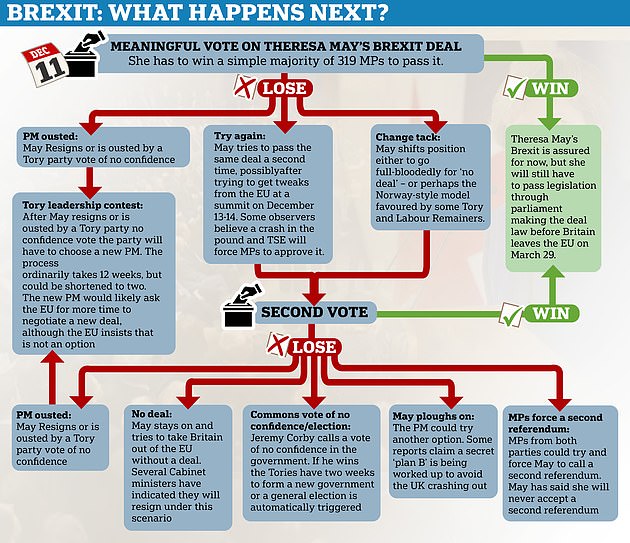 Which Tory MPs have already said they will vote against the deal?

LETTER OF NO CONFIDENCE GROUP