A family whose beloved pet dog died made the unusual decision to turn its fur into a keepsake, sparking debate from viewers about whether it was going a little too far.

Chimera Taxidermy, based in Melbourne, shared a video of the golden retriever’s pelt on social media saying it was going to be kept as a memento by his family.

The business owner, 29-year-old Maddy, explained the pelt was ‘tanned and turned to leather so the fur won’t fall out’ and should remain in good condition for many years.

Maddy shared a follow-up post on Friday explaining that the pelts are kept stored away or are put on display but are definitely not used as rugs to walk on, as some people had assumed.

‘I didn’t make a living room rug out of this golden retriever. I create alternative pet memorials for those that want to keep a physical reminder of their pet,’ she said.

‘The pets I preserve are not floor rugs. They are stored alongside ashes, photos, artwork, collars and whatever other mementos the owner has kept… It’s the same concept as storing an urn on the shelf.’

Many people commenting were supportive and said she was helping people get through losing a beloved animal.

‘I don’t think people understand how special this art is and how much peace it can give,’ one person said.

‘Love to you and the owners who find comfort in your services,’ another said.

‘I would much rather have a pelt or taxidermy than ashes,’ a third said. 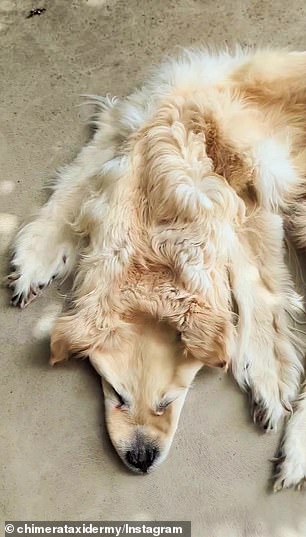 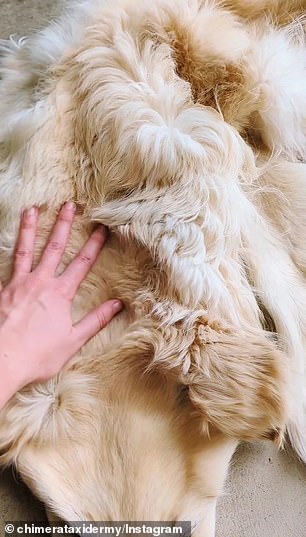 But others said they would find it difficult to have such a reminder.

‘My memories give me peace, I couldn’t do this, it would make it harder for me,’ one said.

‘This is interesting but certainly isn’t for everyone,’ another said.

‘I don’t know if I would be able to handle seeing this,’ added a third.

Maddy told Yahoo News Australia she has been doing pet taxidermy since she was 18 and it has soared in popularity in recent years.

‘Some are a sentimental keepsake, others are on display resting on their beds or however their owners want them preserved,’ she said.

She said most of her requests are for full taxidermy mounts and she has done birds, cats, rabbits and guinea pigs as well as pooches.

While prices are given on a quote basis for a specific job, owners could be looking at anything from a few hundred dollars to a few thousand to preserve their pet.

‘It’s rewarding to be able to help people with their grief and allow them to keep a part of their pet forever,’ Maddy said.

Bicyclist in critical condition after being struck by SUV in Brooklyn

Matt Hancock reveals THREE QUARTERS of over-80s have had vaccines