Where there’s muck, there’s brass! Dilapidated Fife home with dodgy wiring, collapsed ceiling and overgrown garden is up for £50,000 at auction… but could be worth SEVEN times after renovation

A three-bedroom home could be yours for just £50,000,  but potential buyers may be taken aback at the sight of the collapsed ceiling, bare walls and dodgy wiring.

The terraced property is on the High Street in Cupar, Fife, where the average property sells for over £330,000 – nearly seven times the amount the house is on auction for.

While the home may look like a bargain price at first glance, house browsers will need to be willing to get their hands dirty as it is a long way from being fit to live in.

Images show the property has an abundance of totally bare walls, several of which show the exposed concrete and wooden struts of the home’s foundations.

Exposed wiring and fuseboxes also feature heavily in one of the rooms, having been torn out of the walls as part of a kitchen removal.

The fireplace in what could once be considered a living room appears to have been ripped clean out too, as rubble and dust gather across the dark, dirty floor. 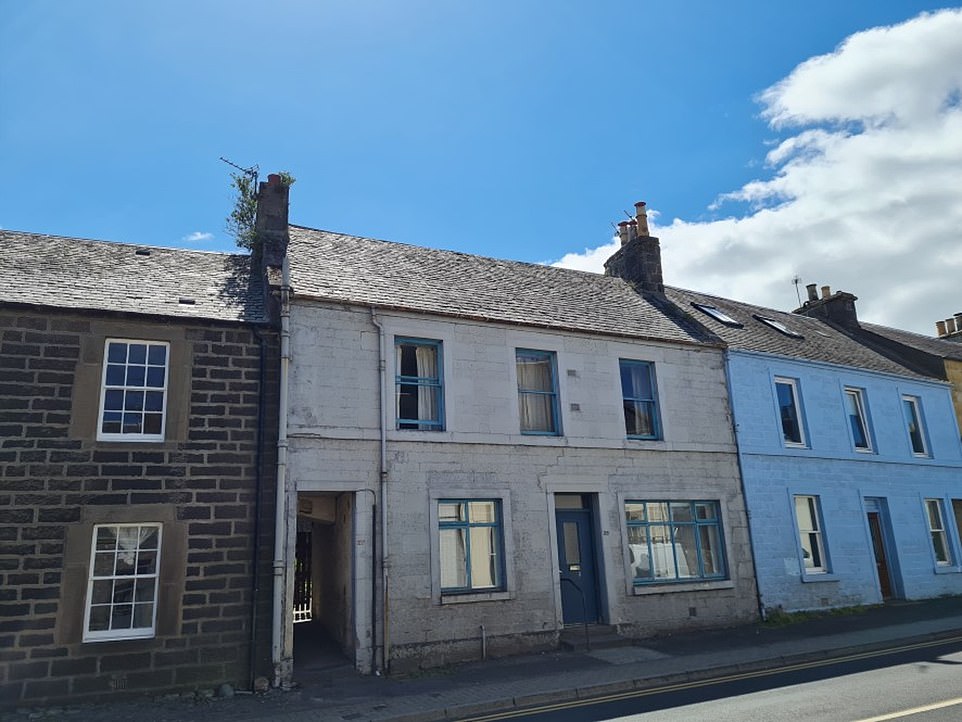 The three-bedroom house based on the high street in Cupar, Fife, will be going up for auction next week for just £50,000 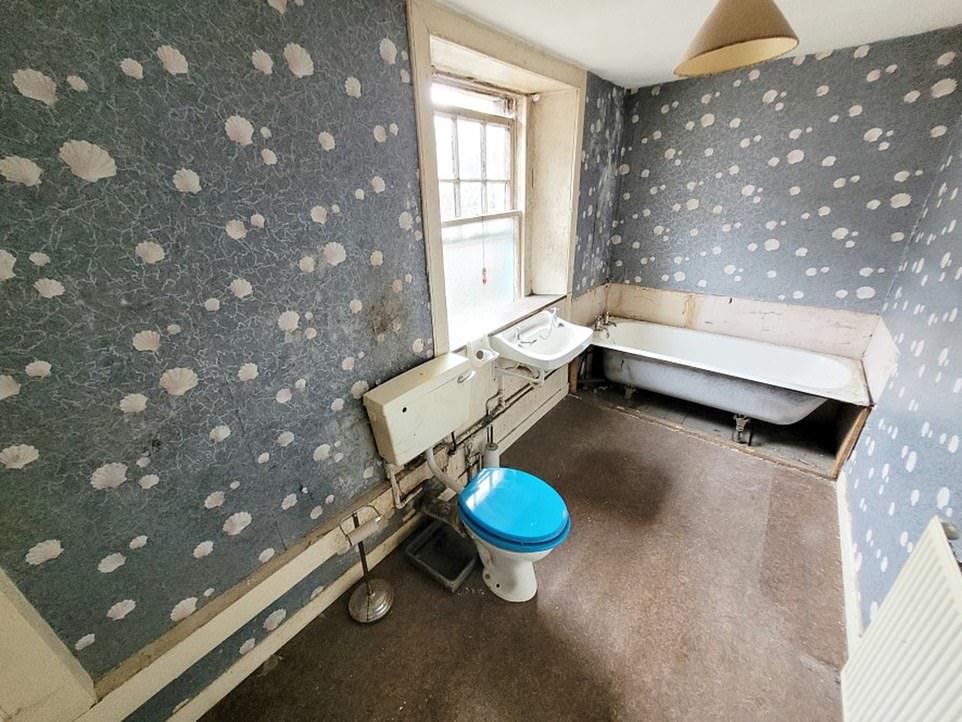 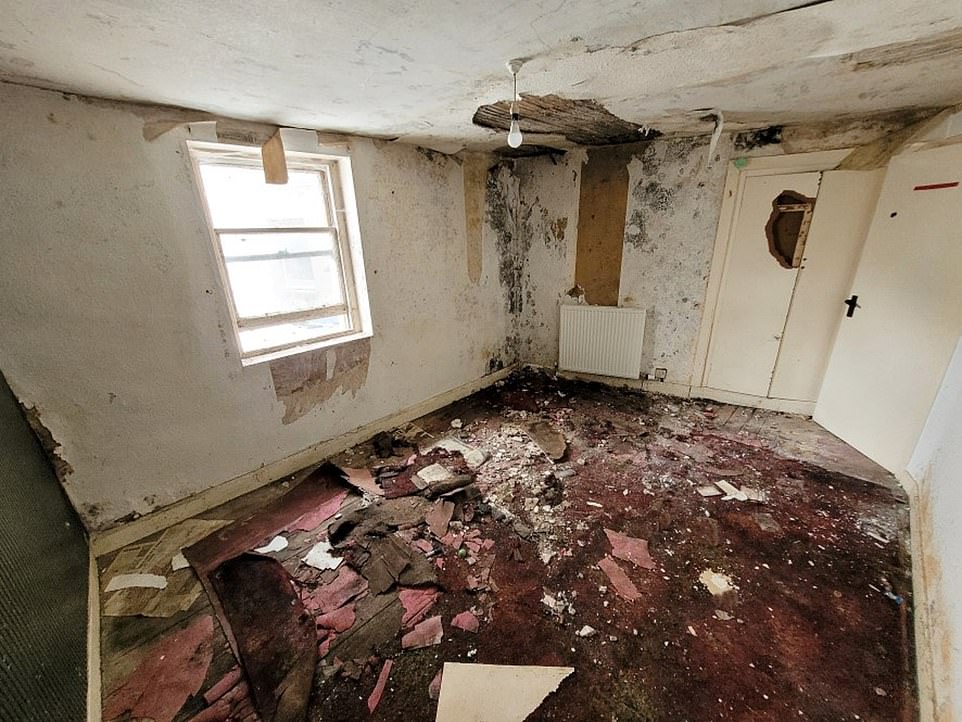 A room, which may be a bedroom, is covered in plaster and old carpet while the boards in the ceiling are visible 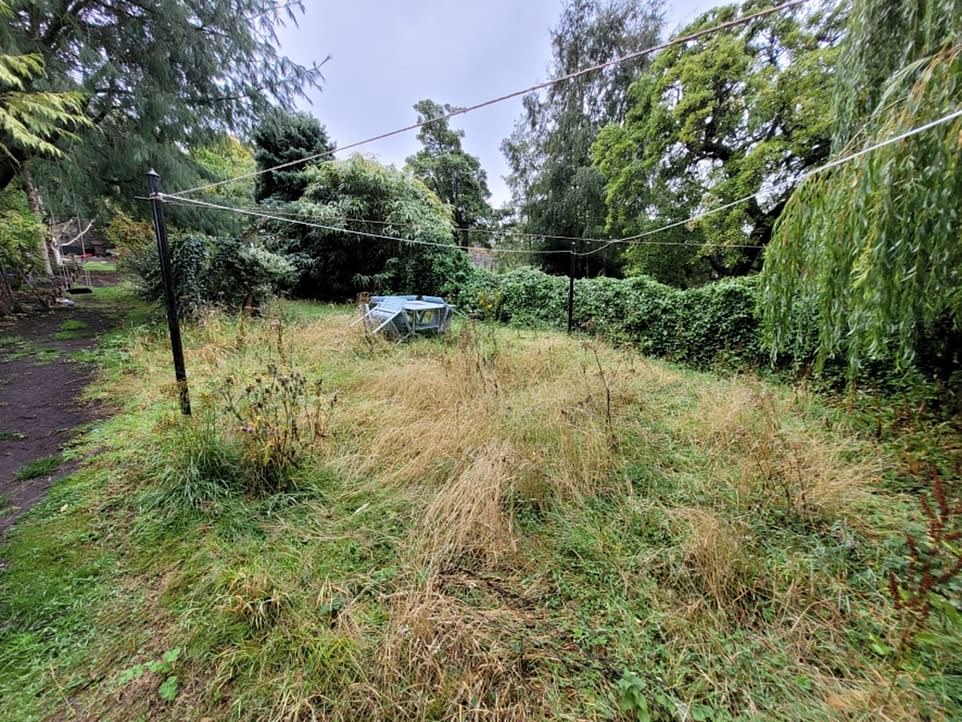 The garden is fairly overgrown has not been tended to in some time, but there is an outdoor table with chairs and a washing line 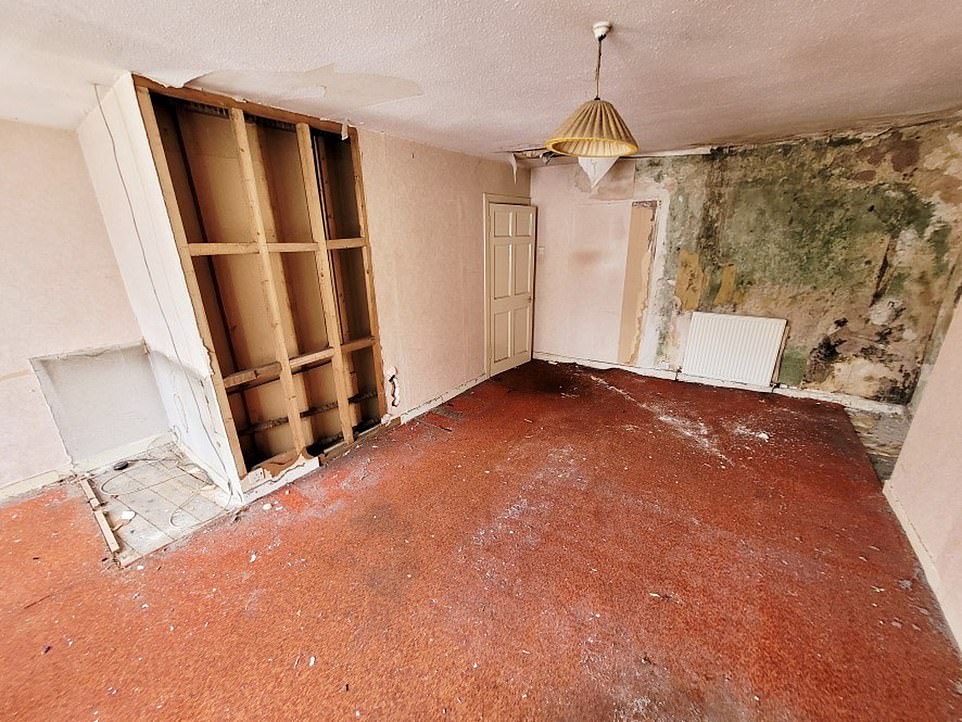 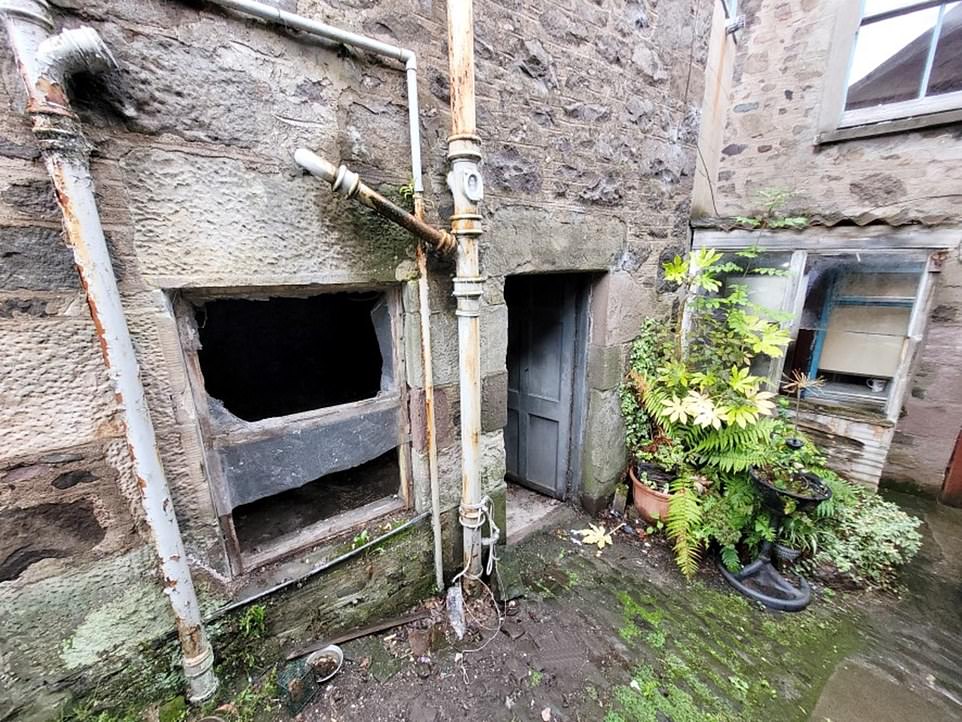 In one room, which looks like it may be a bedroom, the ceiling appears to have collapsed onto the floor.

Bits of the ceiling lay scattered around the floor amidst even more stones and grit, as paper peels off the surrounding walls, whilst a cupboard door boasts an inexplicably large hole punched through it.

A pile of miscellaneous stone, wood and dirt sits undisturbed on the floor of the property’s cellar, whilst a gaping hole in the ceiling is framed by blackened stone walls and a bricked-up window.

Meanwhile, the garden has long been overgrown and stands unkempt and messy, with wildflowers, weeds and long, dry grass surrounding an abandoned table and chairs in the centre of it all.

The home is in dire need of a lot of work before being inhabitable – but could work as a fixer upper for buyers who are not scared of a bit of work.

Auction House Scotland have given the home a guide price of £50,000 and will be putting it up for auction next week on November 3. 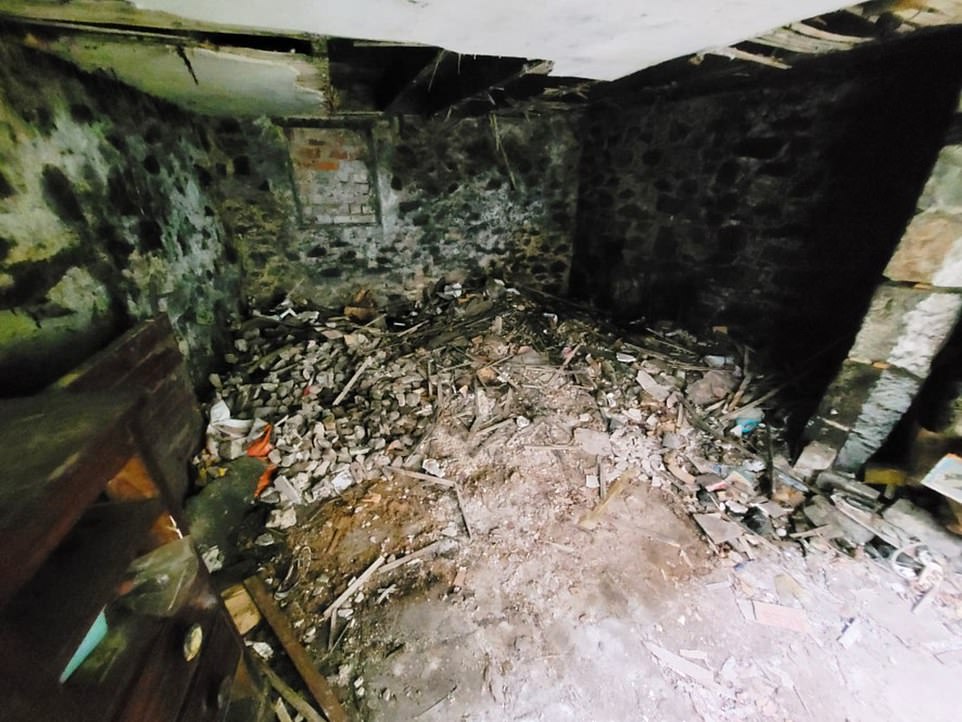 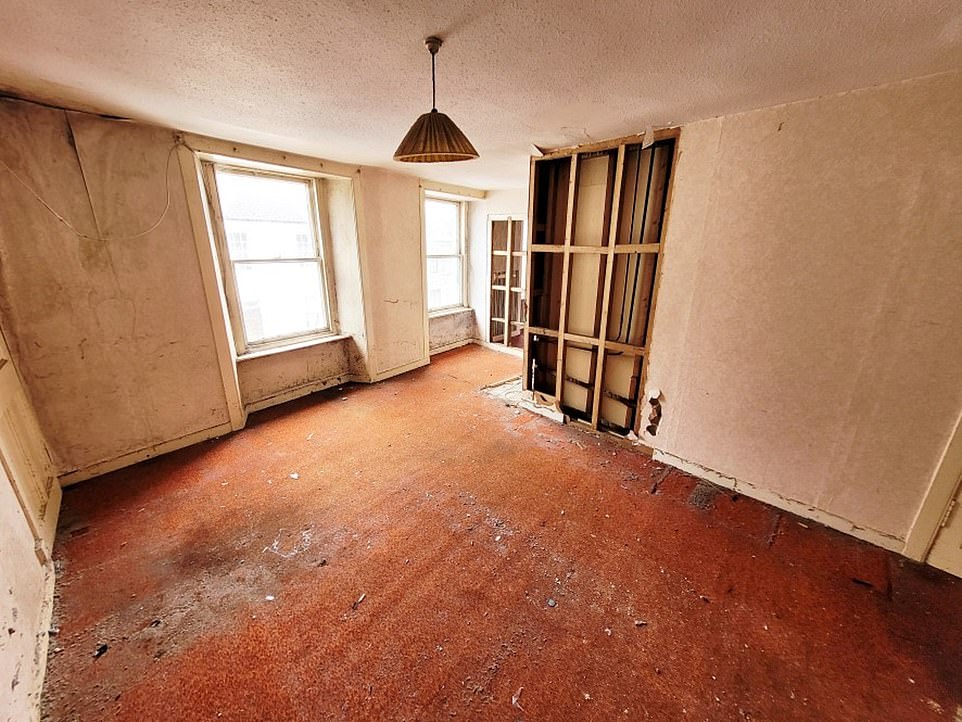 While the house is up for just £50,000, the average house price in Cupar is priced at £334,784, according to property site Rightmove 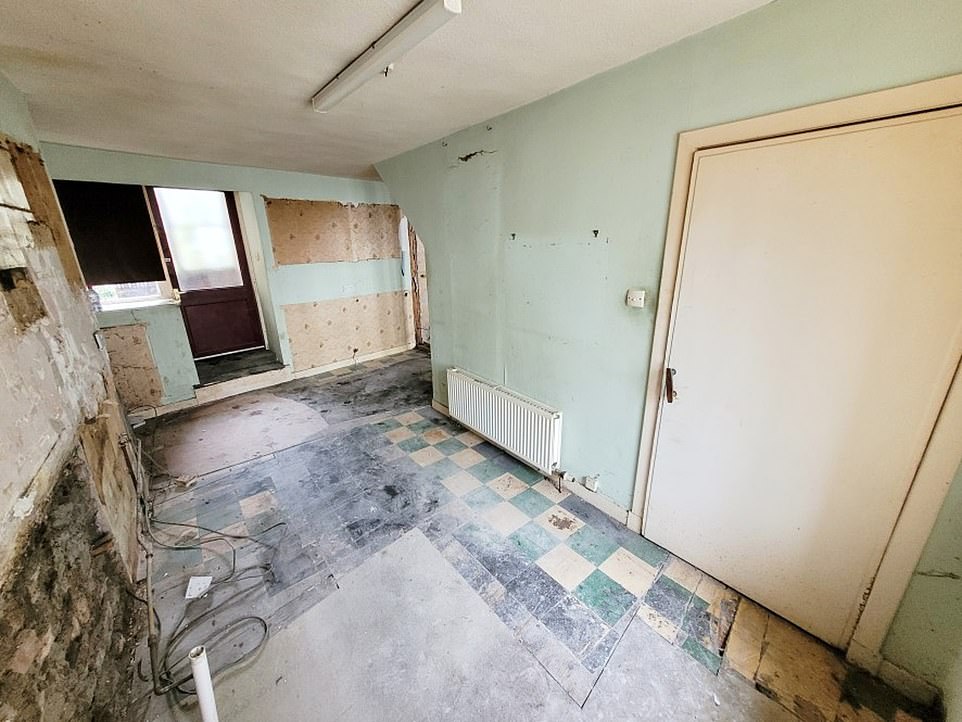 Wires, which may have previously been attached to now removed appliances, hang out onto the floor what may be the kitchen 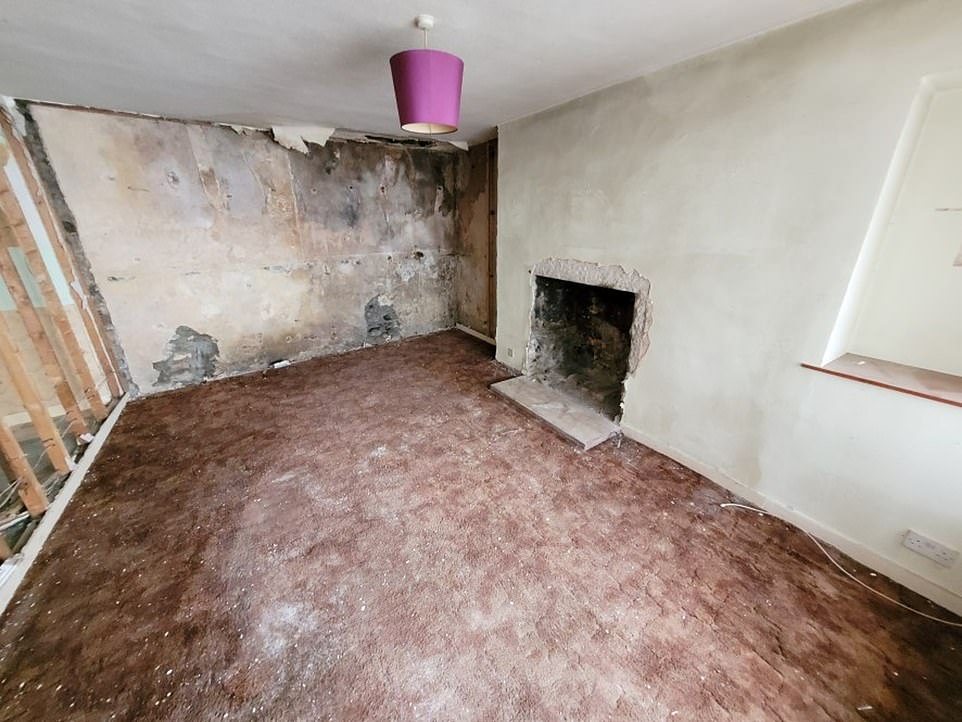 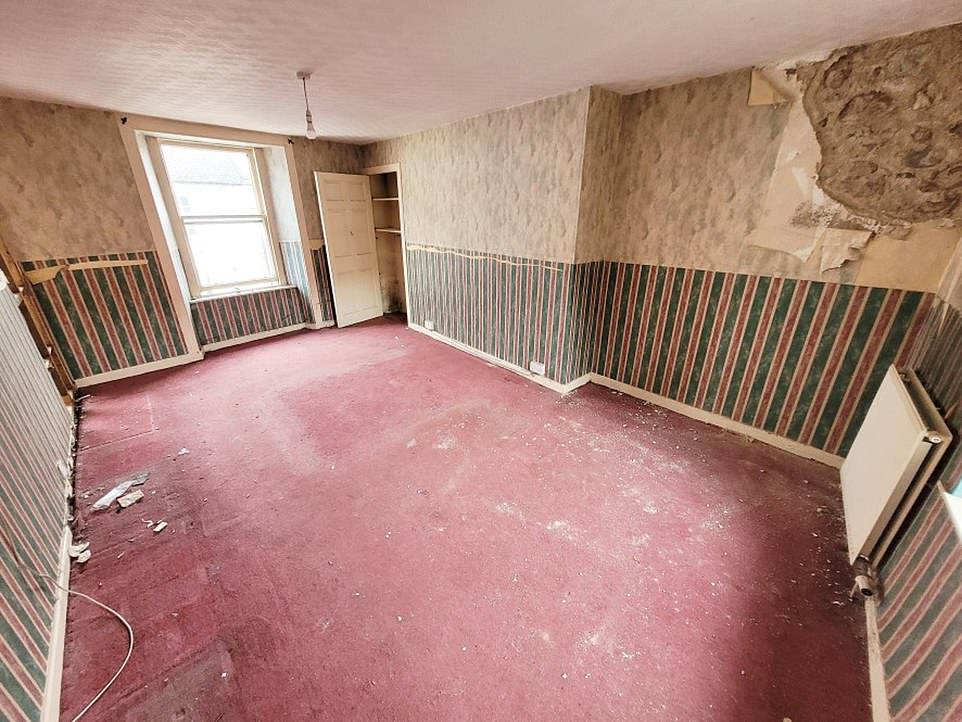 They said: ‘We are delighted to offer to auction this fantastic development/refurb opportunity in the popular North Fife town of Newburgh.

‘The property is a traditional three bedroom mid-terrace over two levels, with the current format comprising, on the ground floor, lounge and kitchen, with the upper level offering three bedrooms and bathroom.

‘Further benefits include an external cellar and large garden area to the rear.

‘A number of exciting value adding development options are feasible including: simply refurbishing the existing three bedroom accommodation; creating two dwellings by way of repositioning stairs and utilising the external store and creating a four bedroom property by repurposing and connecting the external cellar.

‘An additional option could be to create an external office in the cellar.

‘The current owner has already removed the kitchen and cleared much of the remaining areas, leaving a blank canvas for the incoming buyer to readily pursue their chosen development option.’

The average house price in Cupar is priced at £334,784, according to property site Rightmove.

Twitter v. Musk: Tesla CEO to fight case in court that 'does not defer to billionaires'