One Steineck A-B-C model, made about 1949 in West Germany , isn’t telling tales about what, or who, it’s seen. 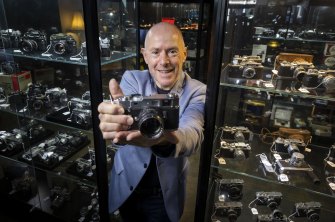 But it could be yours when it goes on sale at a large camera and camera equipment auction in Melbourne.

Charles Leski, of Melbourne’s Leski Auctions, estimates the 10,000 pieces, all from a camera museum owned by the Michael family, owners of retailer Michaels, have a combined value of more than $1 million.

It will all go under the hammer in four auctions over the next two years at Leski’s rooms in Armadale. For the first event on August 9, 600 items are listed in 315 lots, including the wristwatch camera, valued at up to $750.

Leski said there had been interest in the pieces from “all over the world”. Despite the rise of smartphone and digital cameras, there was still a community of aficionados who derived pleasure from historic cameras and who enjoyed developing film, he said. 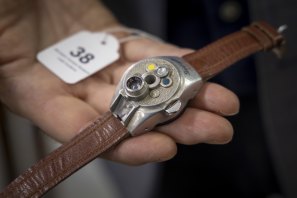 A Steineck A-B-C wristwatch camera, made in West Germany, circa 1949.Credit:Wayne Taylor

The highest-valued piece, at up to $80,000, is a Chinese-made Red Flag 20 camera. They are so rare, Leski says it’s the first time he has seen one in his 50 years as an auctioneer.

She loved Leica cameras, but was not going to promote German products, so she commissioned a Chinese factory to replicate the Leica M4. 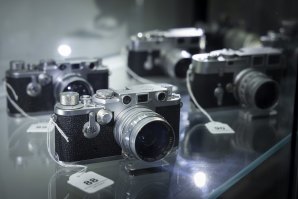 Leica cameras from the 1950s are among the items up for sale.Credit:Wayne Taylor

It wasn’t released commercially, but perhaps a comrade fell on hard times and was forced to sell one, because, somehow, there’s one in the Michaels’ museum.

On sale at the first Michaels museum auction will be authentic Leicas dating from the 1920s, late 1890s and early 1900s studio cameras, advertising posters, and a kerosene-powered 1890s slide projector.

Also on sale will be a three-metre tripod that Leski says in the 1930s was used to raise cameras above horse race finishing lines.

There is a working, see-through Canon EOS camera used by salespeople for demonstration purposes.

Items to be sold at future auctions include a telephoto lens damaged in the 1986 bombing of the Turkish consulate in South Yarra, and a 1928 ladies’ pocket-sized camera that includes a powder compact, lipstick and mirror.

Owner Peter Michael said he was sad to part with the pieces that he, his brothers Tony and Rob and their late father Alan collected for 50 years, starting with Alan buying a customer’s 1920s and 1930s Leica camera collection. “I loved showing people through the museum; there were so many interesting items,” Peter said.

“[The museum] was our pride and joy for so many years”.

He says he knows many items intimately, including a 1960s Canon Dial camera with a clockwork winding film mechanism he owned as a child.

After Michaels closed its store at the corner of Elizabeth and Lonsdale streets to trade solely online early last year, the building was leased to a hospitality business.

That meant there was no longer room for the museum, which used to attract camera enthusiasts from around the world.

“I thought that we’d be building this museum forever,” Michael said. “I never anticipated selling it. But circumstances have changed. You need such an enormous amount of space, just to maintain it.”

US appeals court rules two murderers with COVID will be executed