No rotund Belgian detectives were to be seen, no panama hats, cream suits, two-tone crocodile shoes nor murder suspects in feather boas. 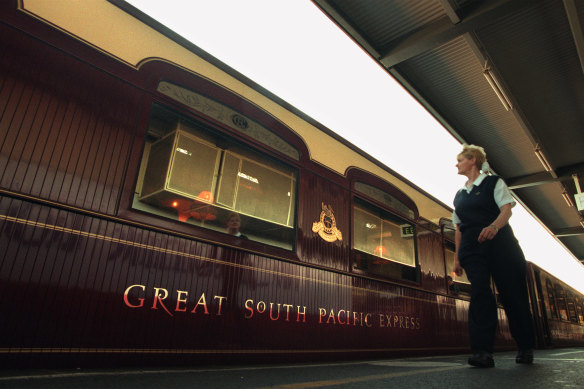 The Great South Pacific arrives in Melbourne in 1997.Credit:Wayne Taylor

But as the jazz band played My Baby Don’t Care, a train to rival the Orient Express glided into Spencer Street Station yesterday. Australia’s $35 million Great South Pacific Express is here for Austral ’97, which starts tomorrow at the Melbourne Convention Centre.

Opulence in motion, the train is a joint venture between Queensland Rail and the operators of the Orient Express, VSOE.

It features Victorian and Edwardian designs and, when all 21 carriages are complete, will accommodate 100 guests and 30 staff.

“We see this as the grandest five-star hotel on wheels in the Southern Hemisphere,” Queensland Rail’s chief executive Vince O’Rourke, said.

Six cars have been completed, including an observation car, lounge car and dining car, and the rest are being built in Townsville. 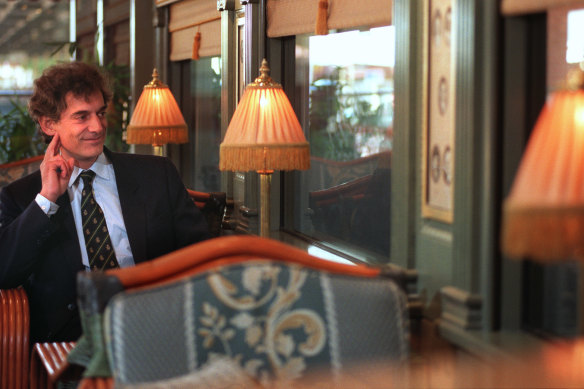 Nick Varian, VSOE’s chief executive, aboard the train as it arrives in Melbourne.Credit:Wayne Taylor

Clerestory ceilings of hand painted pressed metal and silk run the length of the cars, and incorporate leadlight windows.

Each car has a different theme and feel, from the casual observation car to the formal dining one, with the designs based on archival research.

Victorian fruit urns stacked with tropical fruit are etched into frosted glass in the dining car, which is divided in three to add intimacy.

VSOE’s chief executive, Nick Varian, said the Great South Pacific Express recaptured the romance of rail travel. It went back to the time when travelling was an adventure and getting there was more than half the fun, Varian said.

The train will offer regular services from Kurunda and Cairns to Brisbane and Sydney, starting in December 1998.