‘I love you’: Heartbroken mother reveals tragic final words of her ‘caring and unique’ 11-year-old daughter after finding her dead in bed

A mother who found her 11-year-old daughter dead in bed has paid tribute to her ‘caring and unique’ child.

Milly-Sue Pemberton’s body was found by mother-of-four Kayleigh Owens on the morning of June 14 when she went to wake her up for school at their home in Wallasey, Wirral.

Kayleigh said Milly-Sue was always drawing, searching charity shops for her next book, or dressing up as her favourite anime characters before her untimely death. 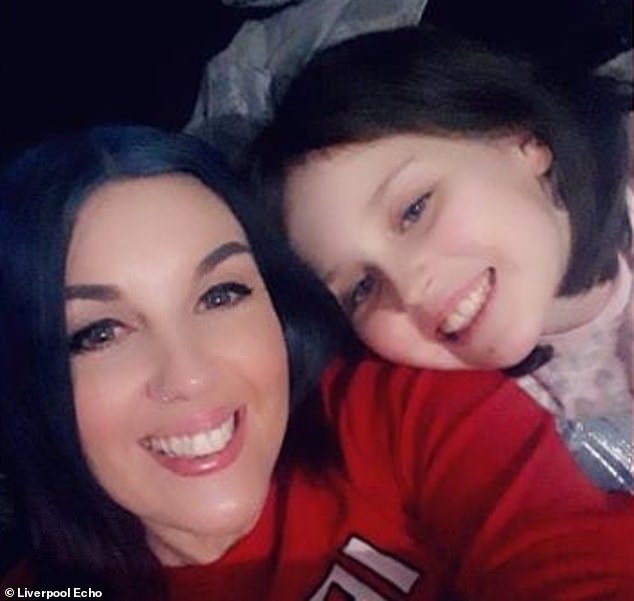 The 11-year-old was described as an ‘old soul’ who never feared being different and standing out from the crowd.

Heartbreakingly, Kayleigh told the Liverpool Echo that the last thing Milly-Sue said to her was, ‘I love you’.

The 36-year-old said: ‘It was my birthday on Saturday, June 12 and she had sent me a message because she was at her dad’s, Andrew Pendleton, and then she came home on the Sunday.

‘It was really nice because she was so happy, she had had a great weekend and she wanted to go for a milkshake and asked me to come with her.

‘She was so fearless, she would go out around the shops in all her cosplay outfits and she would wear these huge big black boots no matter what the weather – she was like an emo, but I have always dressed a bit like that with band T-shirts and dyed hair, so she got that from me.

‘I remember asking her about my Slipknot T-shirt, because she was always taking my T-shirts. 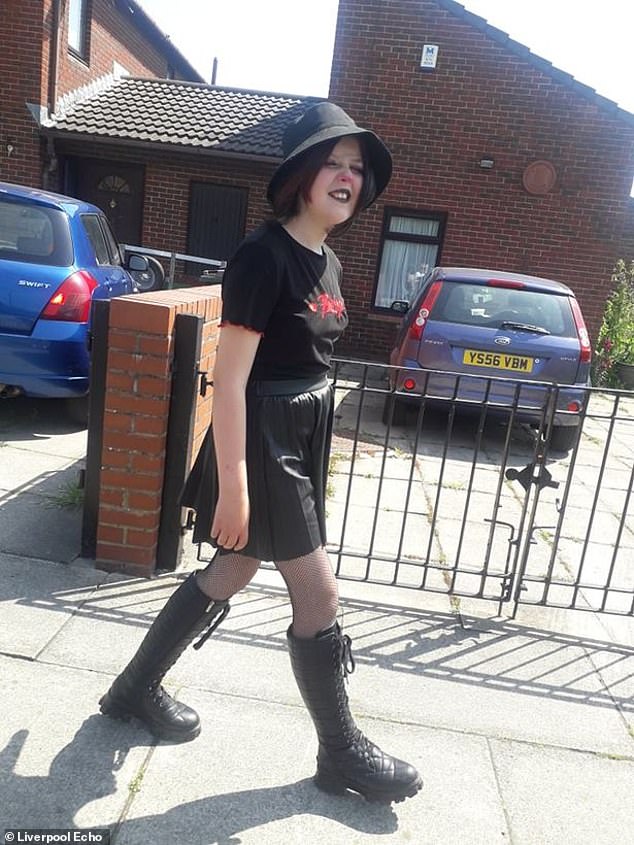 ‘And she was so funny, she said to me ‘well, I wouldn’t have to take your T-shirts if I had my own’. So we made plans to buy her some for her next birthday.’

That Sunday night, Kayleigh put son Dante, five, who shared a room with Milly-Sue, to bed.

‘She left her room about 10.45pm to get a drink, but I knew that meant she was going to put off bedtime and play with Lagertha, our dog. 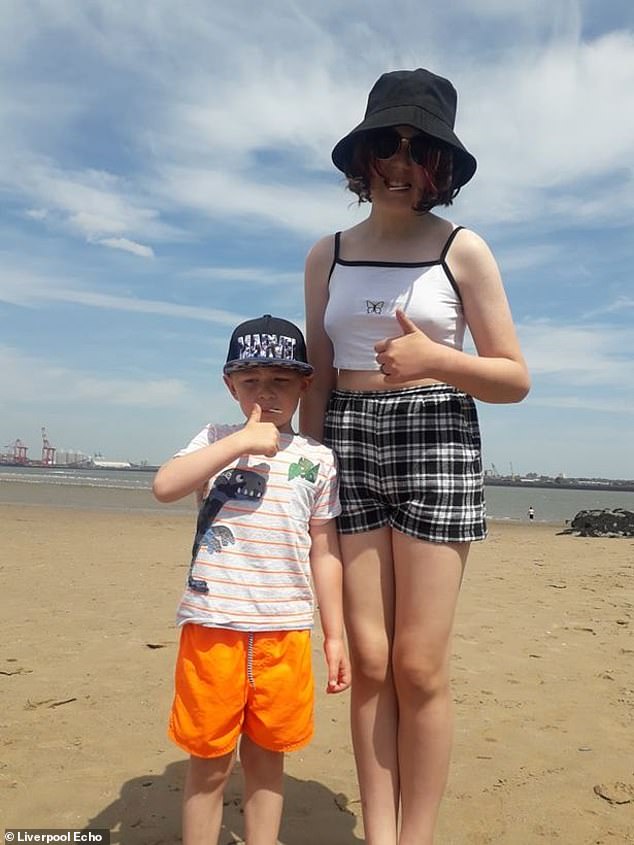 On the fateful Sunday night, Kayleigh put son Dante, five, who shared a room with Milly-Sue, to bed (pictured together)

When Kayleigh – who is also mother to Cameron, 15, and Carter 13 – awoke in the morning she thought it was a little cold so went to close Milly-Sue’s window and wake her up for school.

She said: ‘Her bed is under the window so I stepped over her and then I saw her back wasn’t moving and I was shouting her name.

‘My partner Robert Lowe rang an ambulance and started doing CPR, my son Cameron heard what was going on and rushed in and grabbed Dante and covered his eyes before taking him out of the room.

‘The paramedics told us even with the CPR it was too late. I don’t remember anything after that.’

Kayleigh said the family have to wait for answers over Milly-Sue’s death until the coroner’s report in September but said there will be no closure for her. 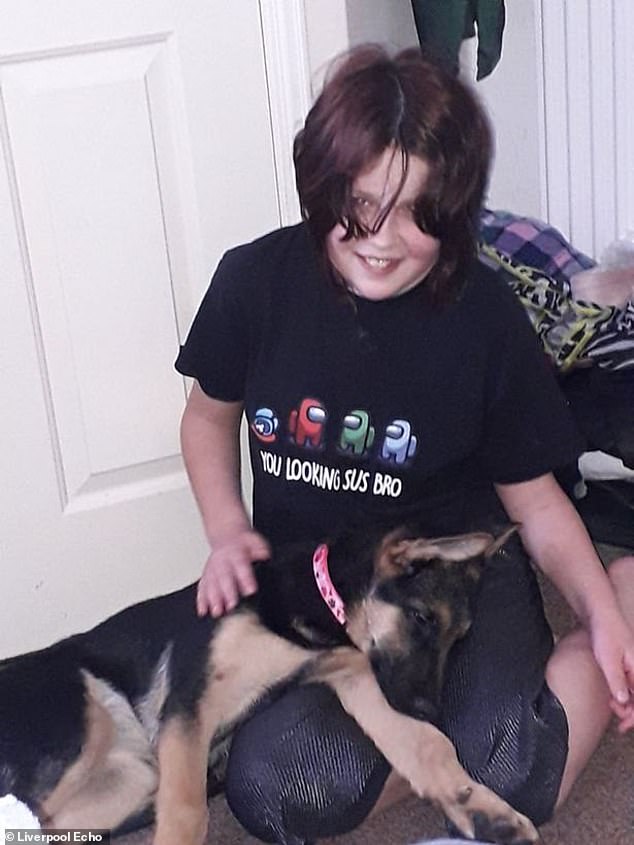 Kayleigh said Milly-Sue was always drawing, searching charity shops for her next book, or playing with the family dog Lagertha (pictured)

She said: ‘I don’t think it has sunk in yet. I remember seeing her in her coffin and her make-up was done just the way she used to do it – she was better than me at make-up, she would have a little pink nose and eyeliner.

‘But it just looked like she was sleeping, she looked just like my Milly-Sue, it made it so hard for me to accept that it was real.’

Kayleigh said she has found it hard to go back into her daughter’s room, adding: ‘I haven’t put Dante back in his room yet because I have just found it so hard to face.

‘I went in the other day to just give it a tidy and it was all just typical 11-year-old stuff, like a Babybel in the pillowcase and drawings under the bed.

‘Dante always asks for her, Cameron stays at his dad’s a bit longer on Sundays because it is the hardest part of the week when she doesn’t come home.

‘I keep expecting her to walk through the door after coming home from school.

‘Rob has been amazing, he has helped me so much because when I have my low moments, well you can just be quite mean, but he knows and tells me to just do what I need to do.’

Kayleigh said the whole family has pulled together, adding: ‘Andrew, Milly-Sue’s dad, and I have always been on good terms and his wife Helen has always been amazing with the kids.’

The Wirral mother said she has been overwhelmed by the love and support shown by people, some she has never even met. 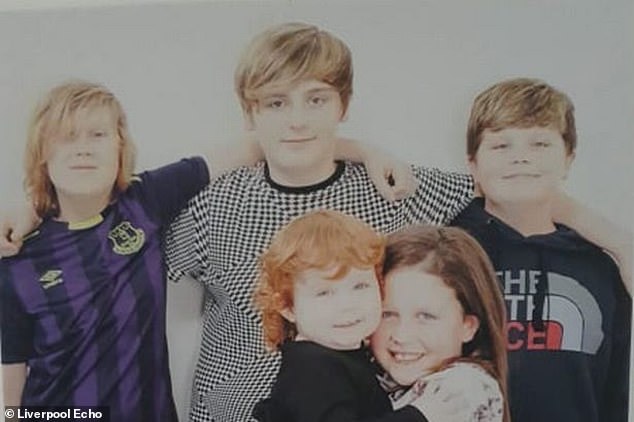 She said: ‘People have raised money for us and it has been such a massive help, because yes, children’s funerals are free, but if you want certain things for your child it can be so expensive.

‘We wanted the anime princess coffin for Milly-Sue with a blue dress, which was just perfect for her – it is the last thing you are going to be able to really do for your child so you want it to be perfect.

‘A neighbour did her flowers after hearing about it and she would not take any payment, people have been so wonderful.’

Kayleigh had asked people to make donations to Alder Hey Children’s Hospital in Milly-Sue’s name. She added: ‘That is where they took Milly-Sue and I was so worried about her being on her own, but the people there were wonderful.

‘And the people at Mill Bank Funeral Home on Mill Lane were incredible, they would always make time for us to go and see her.’

Kayleigh added: ‘I am just so glad Milly-Sue was able to be who she was before she went out of this world because there is so much pressure on young people from social media to be a certain way.

‘But Milly-Sue was just who she was, she had been so excited to start secondary school at Oldershaw in September because she said there would be more girls who dressed like her.

‘Milly-Sue was just who she was in her own ways and I am so grateful she got to do that.’

Is it safe to travel to California? Latest coronavirus advice including San Francisco and San Diego