Washington: The suspected gunman at the centre of the Highland Park mass shooting had planned the attack for weeks, with police saying he disguised himself in women’s clothing and was equipped with a legally purchased firearm. 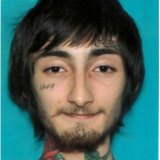 Less than 24 hours after the attack that killed six people and wounded dozens of others at an Independence Day parade in suburban Chicago, authorities have also confirmed their person-of-interest, Robert E Crimo III, fired more than 70 rounds into the crowd from a rooftop overlooking the event, which he accessed using a fire-escape ladder.

“Following the attack, Crimo exited the roof, he dropped his rifle and he blended in with the crowd and he escaped,” said Deputy Chief Christopher Covelli of the Lake County Sheriff’s Office.

“He walked to his mother’s home, who lives in the area and he blended right in with everybody else as they were running around, almost as he was an innocent spectator as well.”

Monday’s massacre – the 309th mass shooting this year – took place minutes into the start of a Fourth of July parade in an affluent suburb that is home to a large Jewish population, about 45 kilometres north of downtown Chicago.

But the sleepy little enclave of Highland Park was shattered yesterday after spectators realised the popping sounds from a nearby roof weren’t from fireworks, but rather, a high-powered rifle indiscriminately spraying bullets into the crowd. 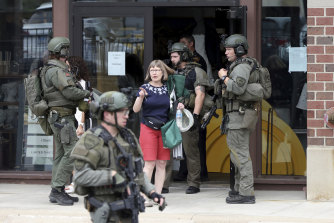 Law enforcement officers help evacuate the neighbourhood after the shooting in the Chicago suburb of Highland Park.Credit:AP

Six people died as a result of the shooting and dozens more were injured, with victims ranging from the ages of eight to 85.

But in chilling new details that will exacerbate tensions over gun violence in the US, authorities revealed that the “AR-style” assault rifle that 21-year-old Crimo used was most likely legally purchased by him in Illinois – a state that is meant to have some of the strictest gun laws in the country.

Police also found a second legally purchased rifle in his vehicle and “there were potentially pistols that he had owned as well,” Covelli said.

While the motivation for the attack is still not known, the deputy chief said there was no information, at this point, to suggest the attack “was racially motivated, motivated by religion, or any other protected status”.

However, investigators believe the rampage had been planned for weeks, with Crimo even going to the length of dressing up in women’s clothing to disguise himself.

“Investigators do believe he did this to conceal his facial tattoos and his identity and help him to the escape with the other people who are fleeing the chaos,” Covelli said.

The laws will enhance background checks for 18 to 21-year-old gun buyers; close the so-called “boyfriend loophole” for domestic violence offenders not married to their partners; and set up grants for states to encourage red-flag laws, which empower the courts to order the removal of a gun if the individual is deemed dangerous. 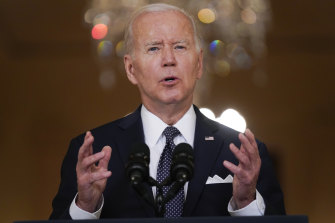 US President Joe Biden speaks about mass shootings in America as he urged Congress to act last monthCredit:AP

However, in the absence of more significant reforms the Democrats wanted – such as a ban on military-style assault weapons and universal background checks – it is unclear whether the regulations would have stopped Monday’s killings.

For instance, red-flag laws require individuals to petition a judge to rule that a person should not possess a gun. Even though Crimo posted tributes to mass shootings and public killings on social media platforms, according to numerous profiles that appear to belong to him, identifying such red-flags ahead would be particularly challenging for authorities.

The Chicago shooting comes only weeks after similar tragedies, including a racially fuelled rampage at a grocery store in Buffalo, New York, and the Robb Elementary School massacre in Uvalde, Texas. Both mass shootings also involved young gunman, aged 18, in possession of high-powered assault weapons.

Biden issued a statement after the Highland Park shooting saying he was “shocked by the senseless gun violence that has yet again brought grief to an American community on this Independence Day” and vowed that he would not give up “fighting the epidemic of gun violence”.

On Tuesday (US time), he also ordered the US flag to be flown at half-staff at the White House and all federal public buildings, military posts and naval stations until sunset on July 9 as a mark of respect for the victims.

Woman, 22, tortured to death by gang-rapists who dumped her bleeding on doorstep in India’s second horror murder in days

Biden faces challenge to return US to global leadership