News of rapper Takeoff’s death has shocked the world of hip hop, with his closest family holding him above a pool of blood after he was shot in the ‘head or neck’ in a dispute over ‘a game of dice’ this morning.

His last desperate last moments came after an incredible family story where the three Migos, who grew up together in the mid 2000s, would go from dropping out of Berkmar High School to building a $26million fortune.

Takeoff, born Kirshnik Khari Ball on the 18th of June 1994, never knew his father, who walked out when he was just a kid. His earliest memories are of his uncle Quavo, born Quavious Keyate Marshall, and his cousin Offset, or Kiari Kendrell Cephus.

Before the rapping trio were making records together, they were a family, with the three members growing up under one roof in Lawrenceville, Georgia.

The family moved across Georgia from Athens to Gwinett when Takeoff was in elementary school and Quavo, who is three year’s older than his nephew and a year older than his cousin, was in middle school.

After the move, all three began living under the roof of Quavo’s mother, Latabia Woodward, who worked as a hairdresser to look after the three boys.

‘I don’t look at [Quavo] as my uncle, but more as my brother. But we always have clowned on each other,’ Takeoff explained in an interview with The Fader in 2013. ‘He is my uncle, so I gotta clown on him. You gotta be funny.’

Starting from seventh grade, Takeoff was the one who wanted to start taking rapping seriously. He approached his uncle in 2009 about forming the group that would go on to become Migos.

The trio of rhymers formed as the Polo Club and dropped their first mixtape, Juung Season, in 2011, when Quavo was in 10th grade. They would later rebrand as Migos.

Described as monotone in interviews, Takeoff’s voice came to life in the studio booth — a memory of him that remains the sharpest after his death on November 1. 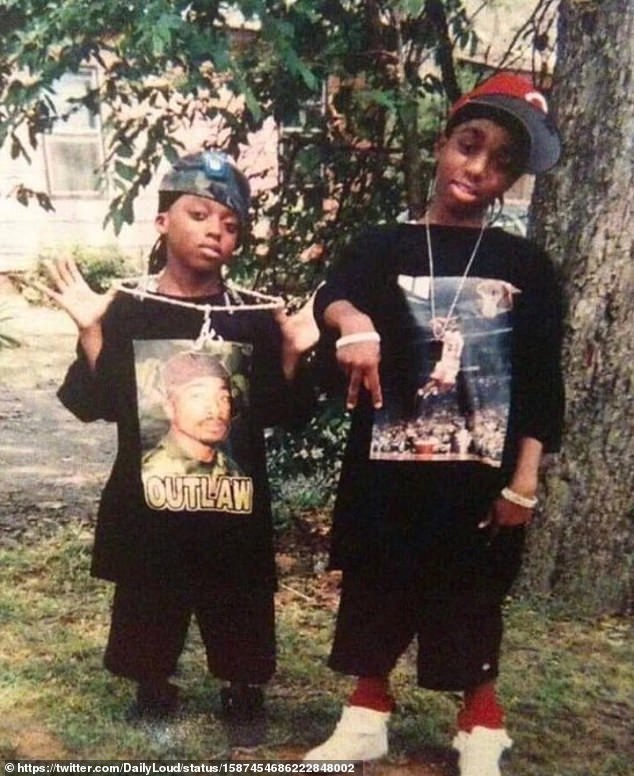 Takeoff’s father left the family when Kirshnik was in the kindergarten age. The rapper, who was killed on November 1, never knew him

Offset, who Quavo described as ‘the most different one’, was never one for growing out his dreadlocks like the other two, cutting them off whenever they got too long.

‘Offset is fam. He’s been around us every since 6th grade,’ said Quavo. ‘We got him to rap in high school.’

At the time of his death, Takeoff had been growing his dreads out for years. His mom — Quavo’s older sister — was always his hairdresser.

‘He likes to work and mind his business,’ his mother said about her son when fans tracked down her Twitter account in 2018, according to Sandra Rose. ‘He doesn’t like to be involved in a lot of things, he just likes to make good music for the people.’

But it was Atlanta where the group sowed the seeds that grew their fame. They described back-to-back nights with DJs, consistently having songs on rotation so that their music and faces became recognized.

The trio would go through around seven songs per day in a relentless schedule, even leaving homework for each other before starting a session. 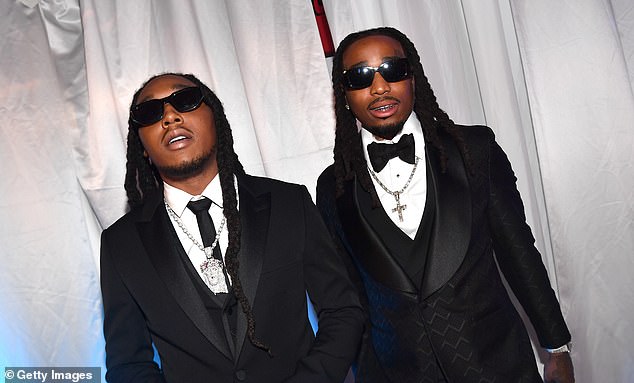 By the time he was in middle school he was living under the same roof as his uncle Quavo, three years his senior. The two are pictured together attending the 2nd Annual Black Ball at Fox Theater on June 1 in Atlanta

‘You gotta have fun with a song, make somebody laugh,’ said Takeoff. ‘You gotta have character. A hard punchline can make you laugh, but you gotta know how to say it.’

Takeoff was known as the most silent member of the band, are rarely gave interviews.

He’s kept any potential love interests a secret, apart from the time that stripper London Dallaz posted a picture of the two of them in bed together.

Migos have a fifteen minute rule, stopping the performance then and there before playing it back to see how it sounds.

‘When you drop a song and wake up in the morning and hear the song you dropped last night, that’s the best feeling. The song will tell you then,’ said Quavo. 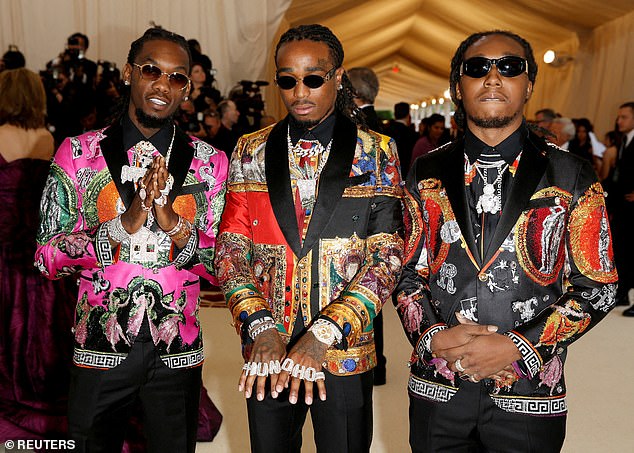 Offset, Quavo and Takeoff of Migos arrive at the Metropolitan Museum of Art Costume Institute Gala (Met Gala) in 2018

They had their first break in 2013 with Versace, a track that went on to be remixed by Drake, propelling their first full-length album Y.R.N into the spotlight a few years later.

Justin Bieber posted a short video of himself rapping along, sending their popularity soaring.

The group became steady regulars on the hip hop scene since, working alongside high-profile artists like Drake, Katy Perry, and Cardi B — who Offset went on to marry.

But the group never forgot family. In 2017, Takeoff and Quavo bought a house for Quavo’s mom Edna Marshall, according to XXL Mag.

‘ME and Take Jus Bought Mama A House!!! Tha Big Way!!!’ Quavo Tweeted at the time. 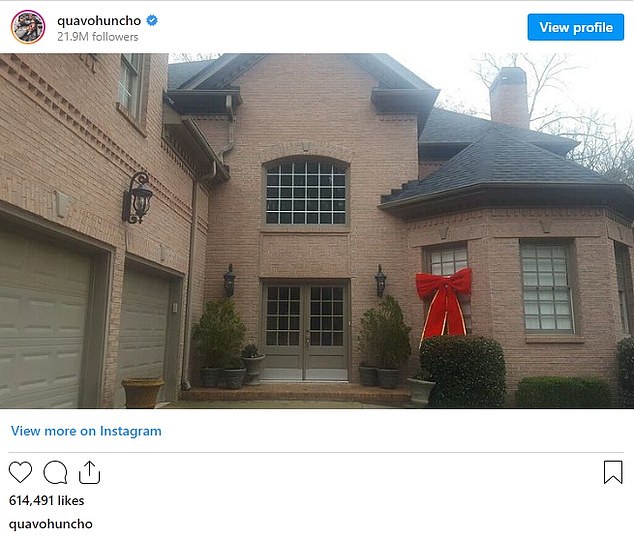 In 2017, Takeoff and Quavo bought a house for Quavo’s mom Edna Marshall

But Migos wasn’t without its issues. Offset was locked up in Georgia’s DeKalb County Jail for violating his probation received due to prior felony convictions for burglary and theft in 2013.

A series of legal issues plagued the trio as time went on. Offset was arrested for driving with a suspended license in Atlanta in 2016, whereas Takeoff was asked to leave a flight from Atlanta to Des Moines a year later, and the Washington Avenue Armory in Albany sued the group for allegedly inciting a riot at a performance where six people were stabbed.

Around this time, Takeoff began working on his own solo projects, according to his mother. The three Migos were finally drifting apart.

Rumors of a breakup were sparked when Takeoff was absent from an AMAs award for Favorite Duo/Group in the Pop/Rock category in 2018. 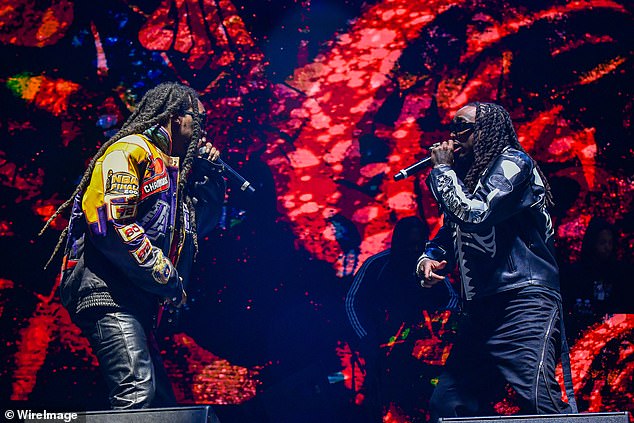 As the years went on, Quavo seemed most likely to spark a solo career when he was featured on DJ Khaled’s ‘No Brainer’.

In May 2022, Offset and Cardi B unfollowed the other members of the group on Instagram.

Offset was preparing to drop his sophomore studio record on November 11, when news of Takeoffs death broke headlines on November 1.

Despite the rumors, the group kept stayed close even when working on their own projects.

‘We always family, that ain’t gonna change,’ Takeoff told the Big Facts Podcast a month before the shooting.

The last Migos album, Culture III, was released in June 2021. It will be their last as a trio.

Anthony Weiner is still texting away — inside his halfway house