Just a few weeks ago, entertainer Kid Rock posted a picture of his band playing an outdoor biker rally in South Dakota, a venue full of cheering, unmasked fans.

“There is nothing the mainstream media or internet and social media trolls can do but look at this pic and weep, knowing they will never beat us,” he wrote on Facebook. 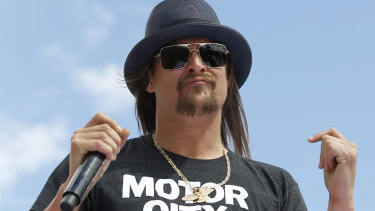 This weekend Kid Rock had posted an update: his upcoming shows in Fort Worth, Texas have been scrapped because his bandmates have COVID.

“I am pissed,” he wrote on his website on Friday.

He further warned off critics.

“And before u s— for-brains bloggers and media trolls run your mouths, many of them, like me, have been vaccinated.” 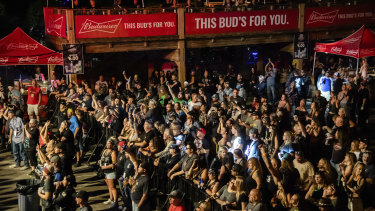 He went on to rail against President Joe Biden’s handling of the withdrawal of US forces from Afghanistan, calling for the military to “bomb the s— out of those” unspecified “f—s.”

The Only God Knows Why singer said he was hoping to try and entertain fans anyway, but couldn’t make it work.

“I am beyond upset and you real ones know I would never cancel if I absolutely didn’t have to,” he added.

Rock and his band performed at the Sturgis Motorcycle Rally in South Dakota on August 8, which was labelled a “superspreader” event due to its huge crowds and cavalier nature.

COVID-19 cases have spiked more than 500 per cent in the weeks after hundreds of thousands of motorcyclists flocked to the famous rally, which drew one of its largest crowds yet this year despite the fast-spreading Delta variant.

The annual event kicked off in Meade County on August 6 and wrapped on August 15. Just two days before motorcycle enthusiasts descended on the state, South Dakota reported a total of 657 active cases.

As of Friday, there were 3992 people battling infections across South Dakota, with an average of 243 new cases and 123 hospitalisations daily. Meade County, home to Sturgis, has counted 330 new cases in the last two weeks, up from the 20 reported in the two weeks before the rally, according to data from Johns Hopkins University.

Meade County is also experiencing a positivity rate of about 34.2 per cent.

Others wished the band a speedy recovery.

Their next show is a biker event booked for September 18 in Ocean City, Maryland.

Seafood firms are 'days from collapse' due to Brexit border chaos