India illuminates for Diwali: Hindus celebrate festival of light with record-breaking display of lamps with New Dehli’s Gurudwara Bangla Sahib Temple is lit up in spectacular fashion as festival returns in full glory after two years of Covid-hit events

Indians have celebrated Diwali as earthen oil lamps and dazzling lights lit up homes and streets across the country to mark the Hindu festival that symbolises the victory of light over darkness.

Diwali, which is a national holiday across India, is typically celebrated by socialising and exchanging gifts with family and friends.

Many light earthen oil lamps or candles and fireworks are set off as part of the celebrations.

In the evening, a special prayer is dedicated to the Hindu goddess Lakshmi, who is believed to bring luck and prosperity.

Ahead of the celebrations, cities and towns across the country were decked with colourful lights. 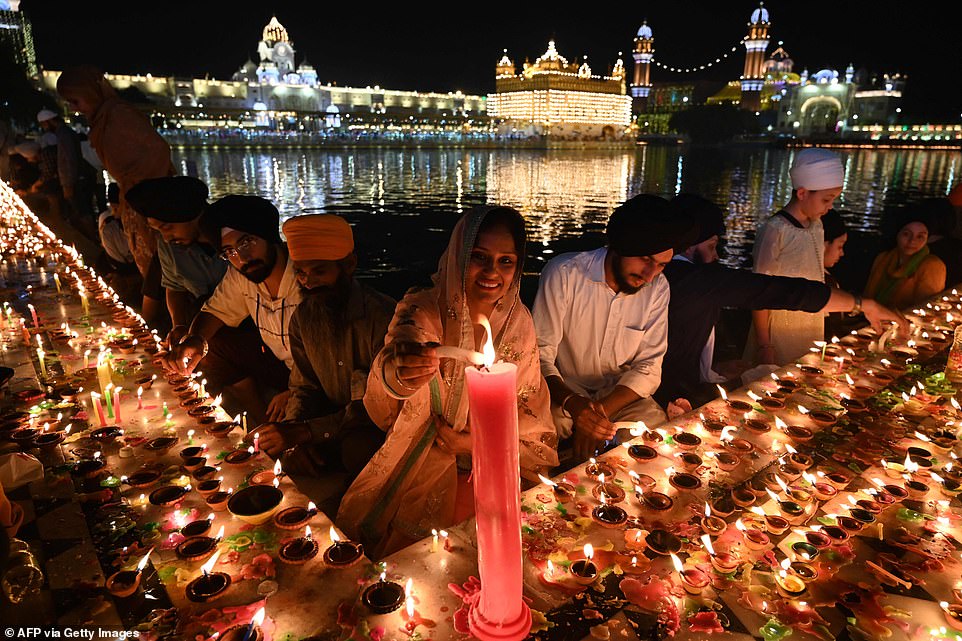 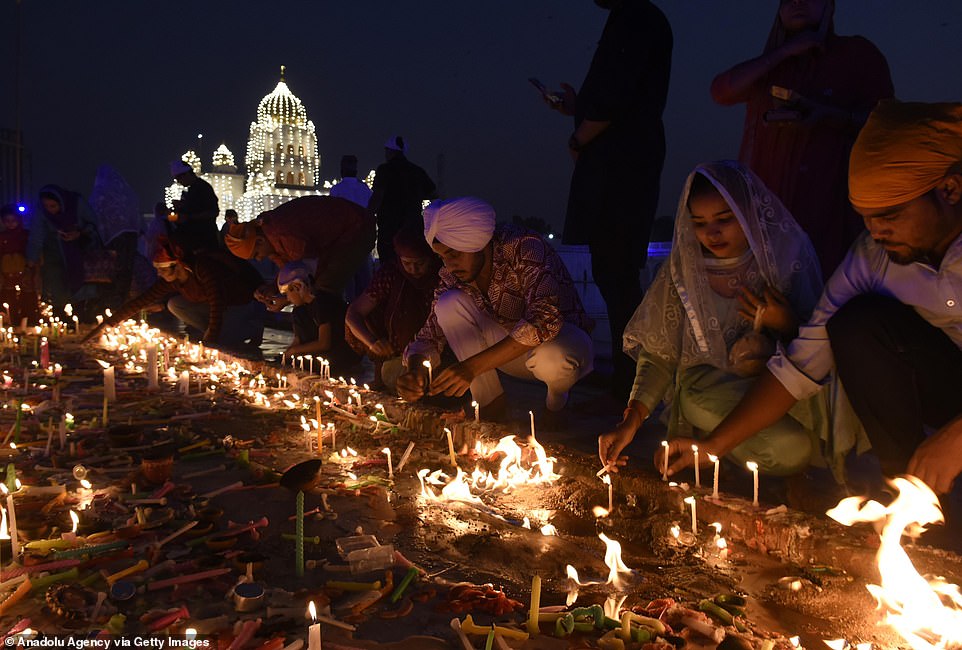 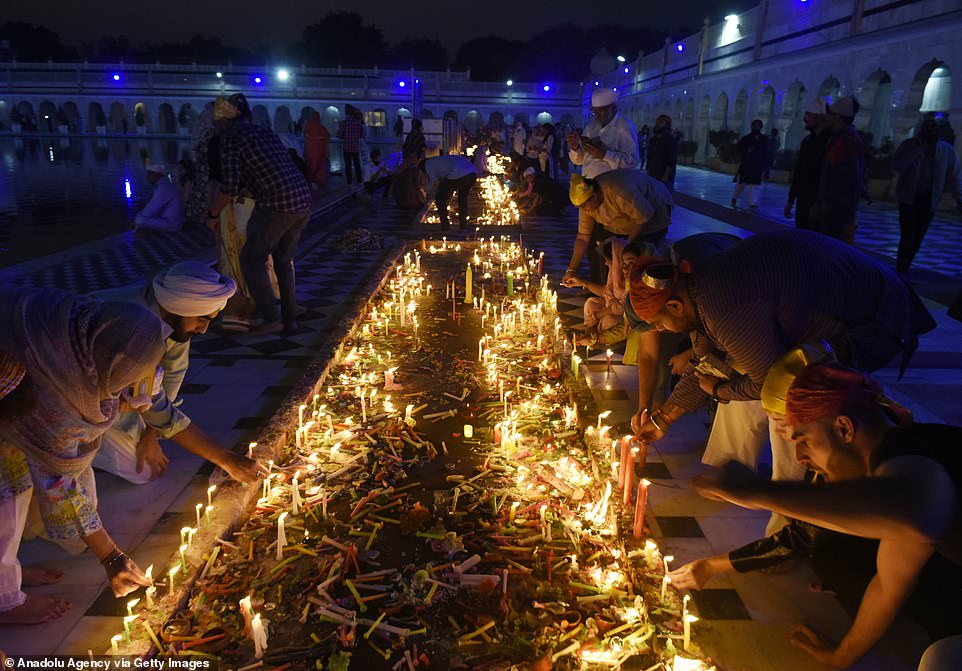 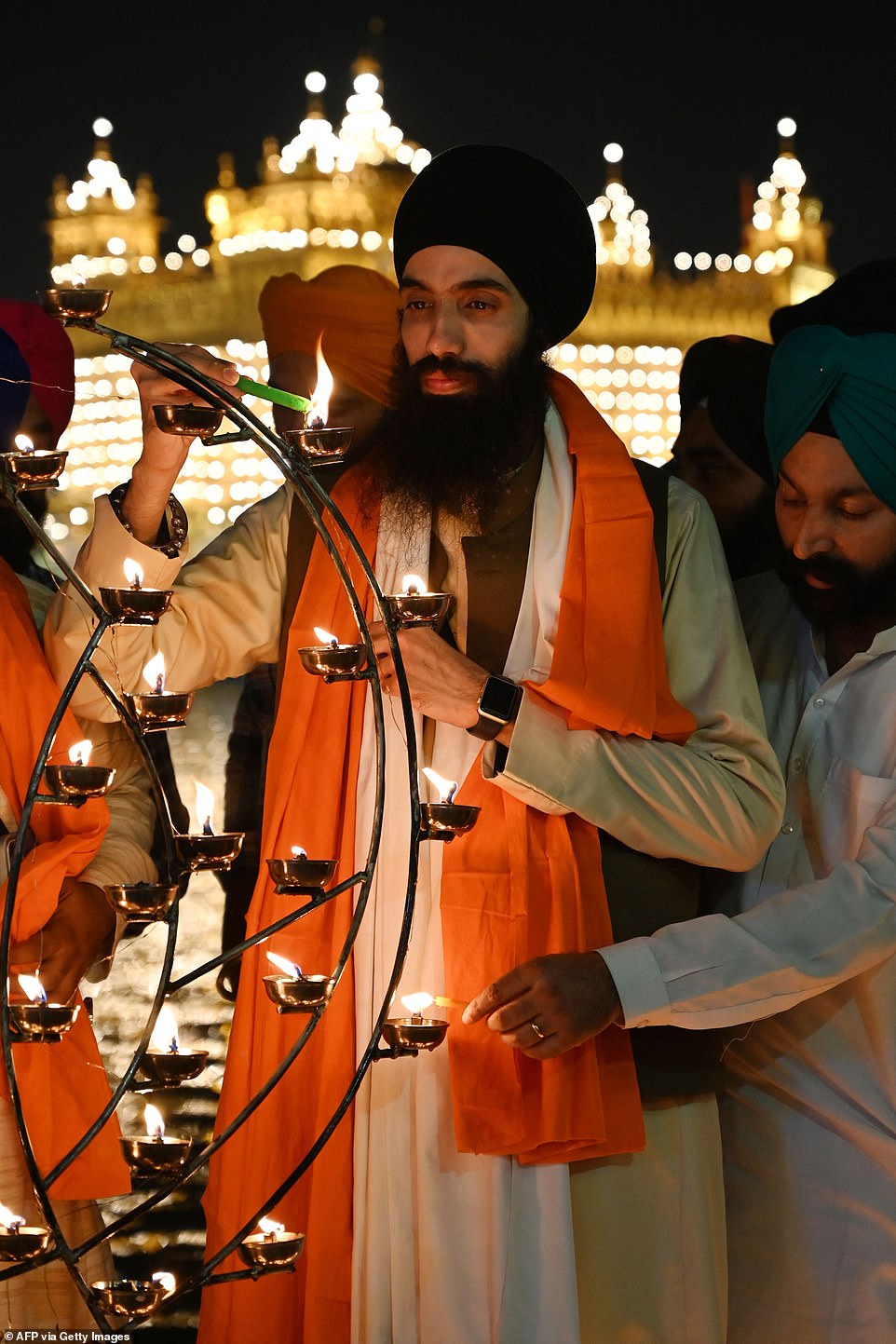 Devotees light dozens of candles in an opulent frame while celebrating Diwali, the Hindu festival of lights 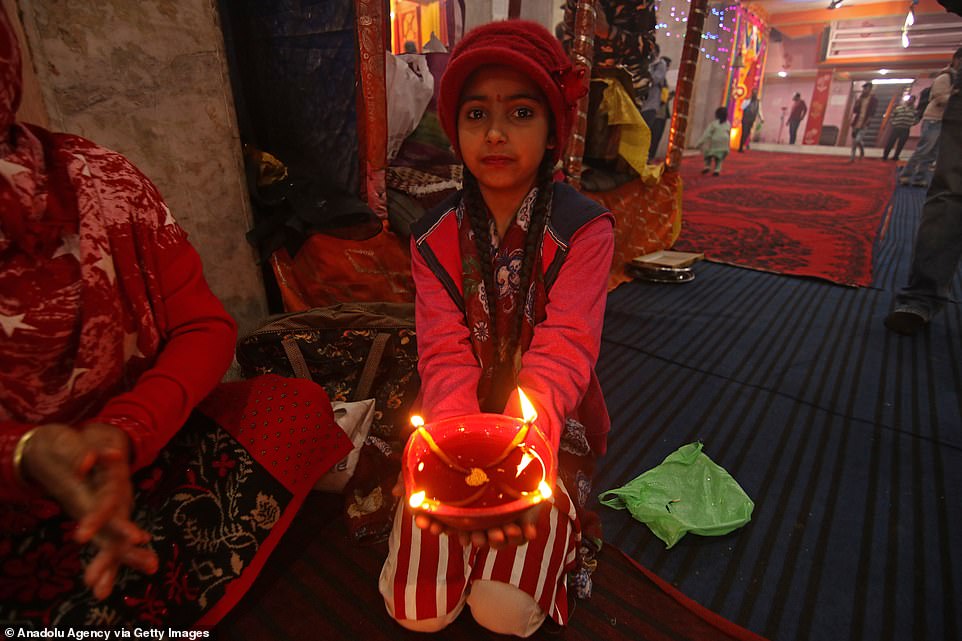 A hindu girl is pictured at a temple during the Diwali celebrations in Srinagar, Kashmir province

Millions of Indians thronged crowded bazaars for shopping, bringing back the Diwali cheer that was dampened during the last two years due to coronavirus restrictions. The markets buzzed with eager shoppers buying flowers, lanterns and candles meant to decorate houses and offices.

As dusk fell on Sunday, over 1.5 million earthen lamps were lit and kept burning for 45 minutes at Ram ki Paidi, on the banks of Saryu river in the northern city of Ayodhya in Uttar Pradesh state, retaining the Guinness World Record it set last year.

Senior government official Nitish Kumar said that more than 22,000 volunteers, the majority of them college students, ensured that lamps burned for the prescribed time to break last year’s record of 900,000 oil lamps.

Hindus believe that the deity Lord Ram was born in Ayodhya, where he returned after 14 years in exile. To celebrate his return, people light the earthen lamps.

The holy city was decked with fairy lights ahead of the event and a laser and fireworks show illuminated its lanes and river banks. Thousands of residents also lit lamps at their houses and temples across the city. 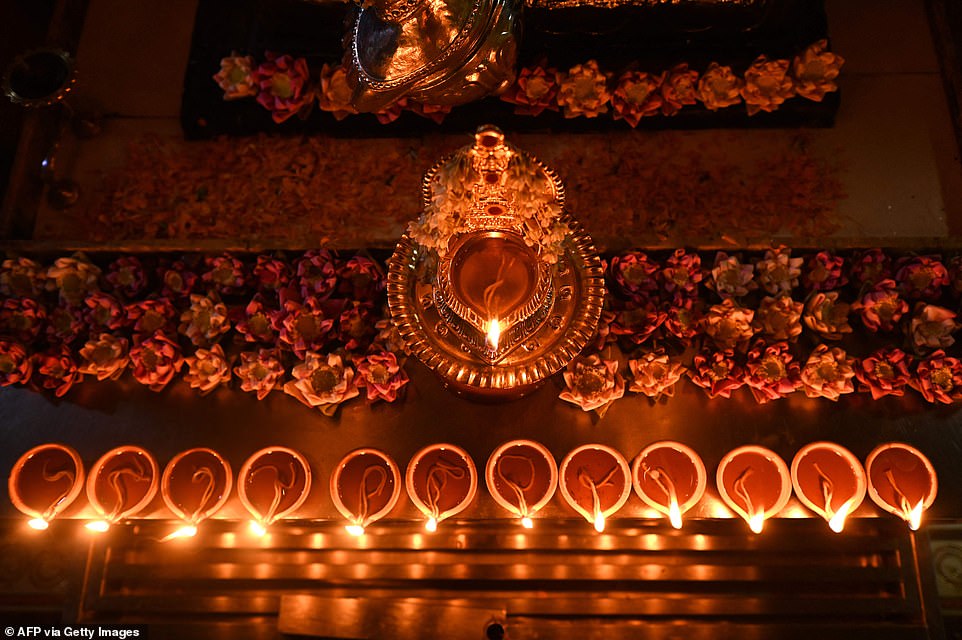 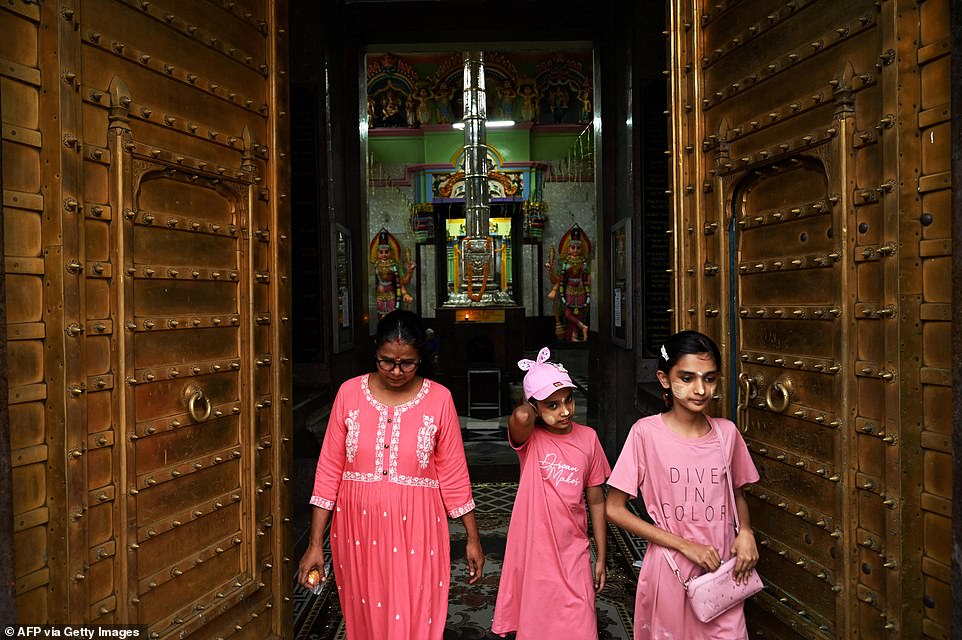 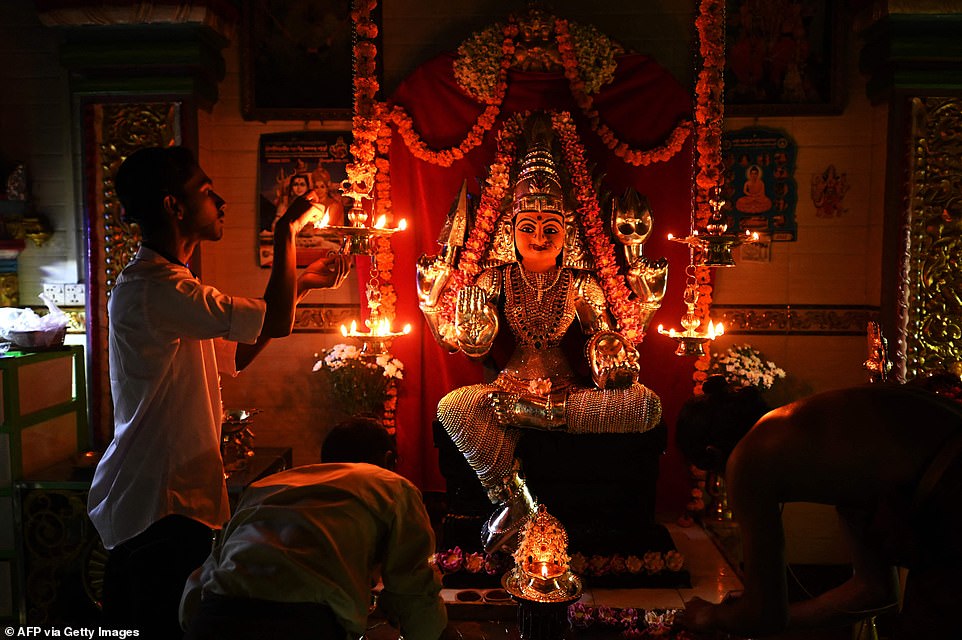 Worshippers pay their respects during the Hindu festival of Diwali at a temple in Yangon, India 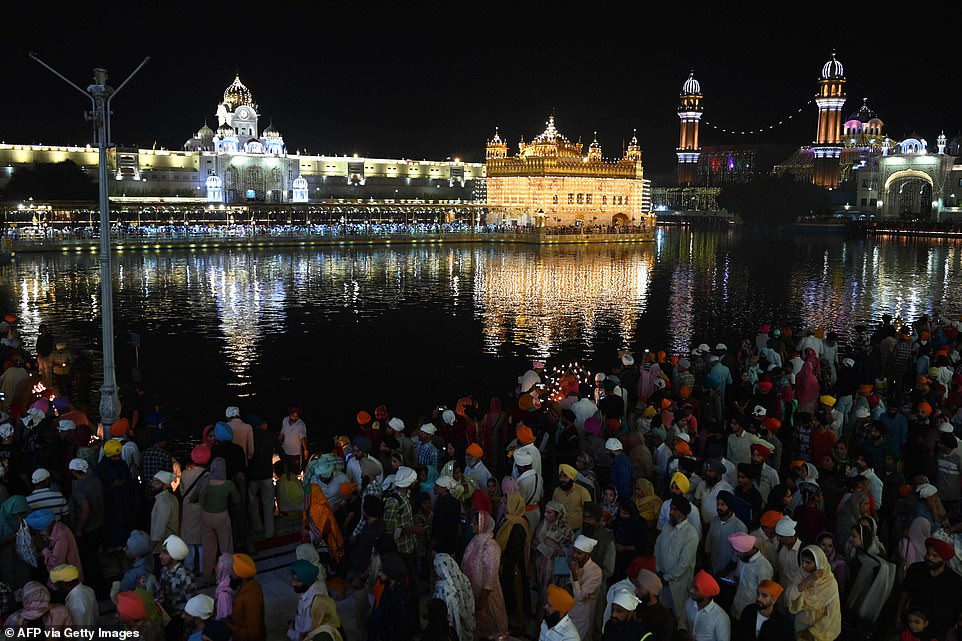 Devotees visit the illuminated Golden Temple on the occasion of Bandi Chhor Divas, a Sikh festival coinciding with Diwali, the Hindu festival of lights, in Amritsar 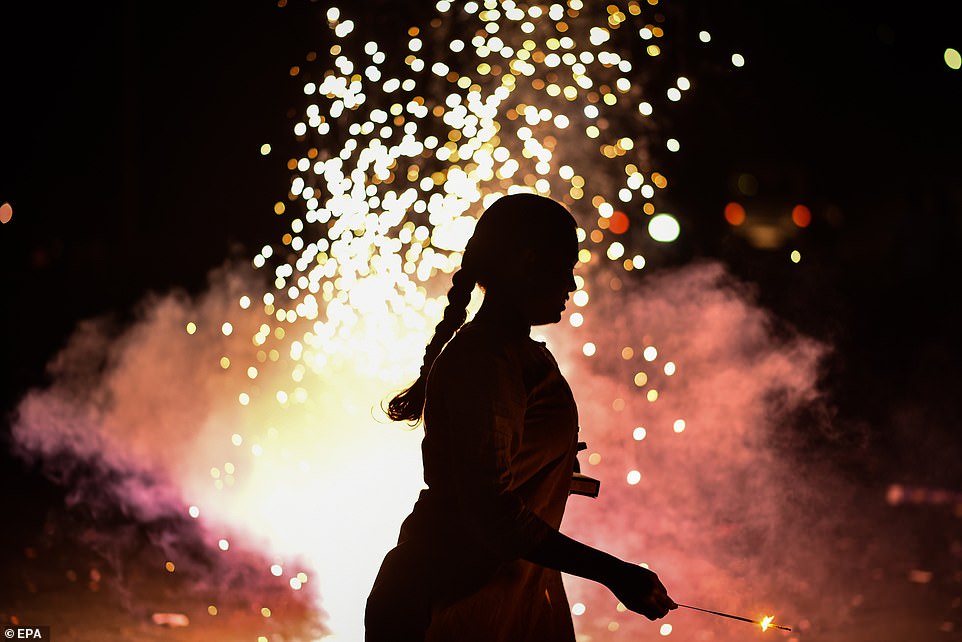 A woman lights a firecracker on the occasion of Diwali, the Hindu festival of lights, in Chennai, India 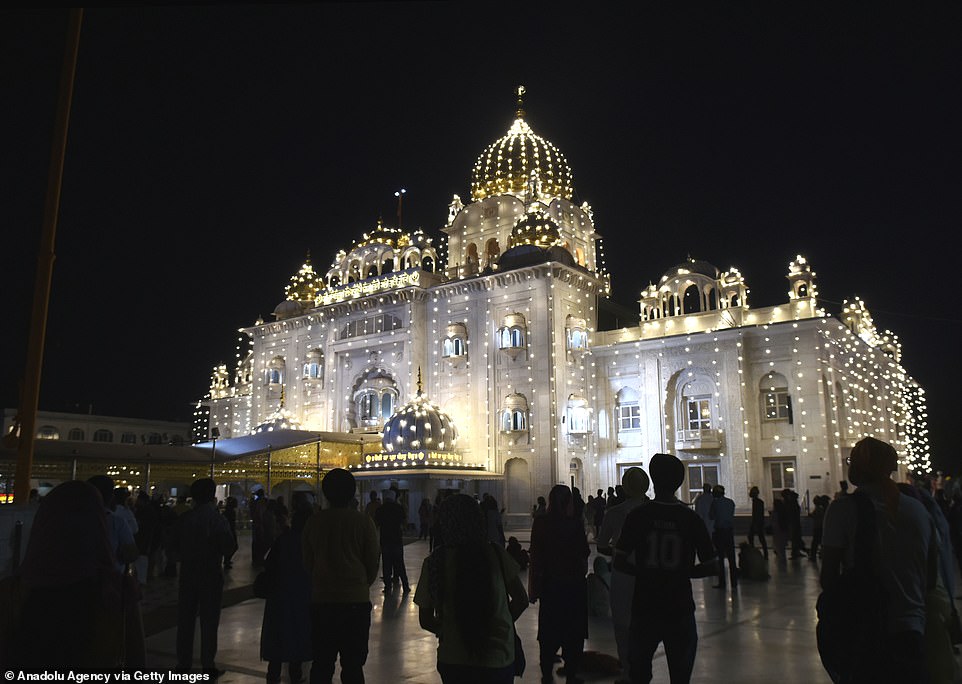 A view of the illuminated Gurudwara Bangla Sahib Temple in New Delhi, India, during Diwali celebrations 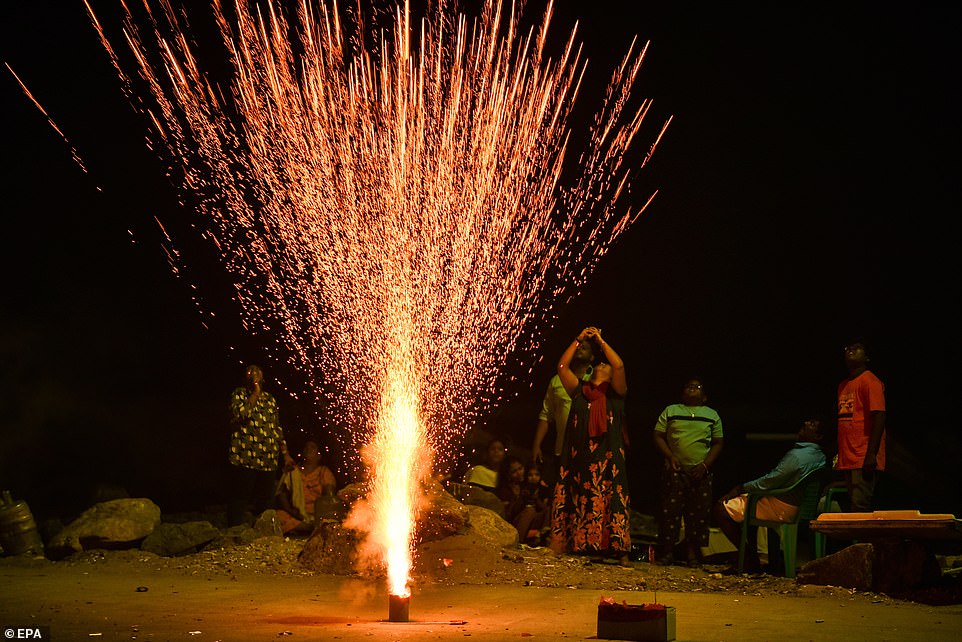 Locals light a firecracker on the occasion of Diwali, the Hindu festival of lights, in Chennai 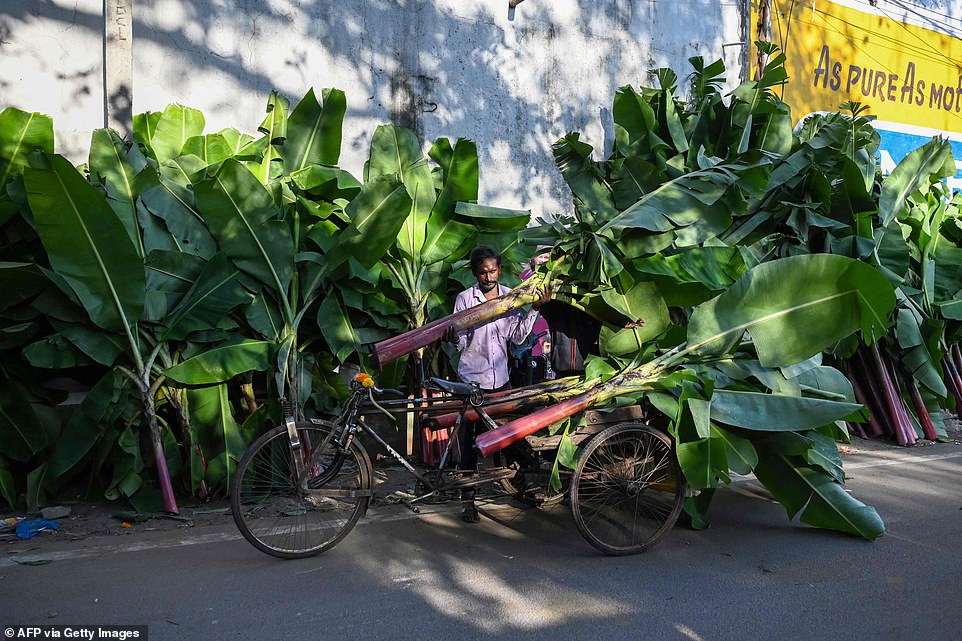 The stunning spectacle along the shores of Saryu River was attended by Prime Minister Narendra Modi. Amid chants of Hindu religious hymns, Mr Modi lit an earthen lamp and performed “aarti” – a customary Hindu ritual that involves waving lighted lamps in front of an idol.

Earlier, he offered prayers at a long-awaited temple of the Hindu god Ram at the site of a demolished 16th-century Babri mosque in Ayodhya.

The Babri Masjid mosque was destroyed by a Hindu mob with pickaxes and crowbars in December 1992, sparking massive Hindu-Muslim violence that left some 2,000 people dead, most of them Muslims.

The Supreme Court’s verdict in 2019 allowed a temple to be built in place of the demolished mosque. 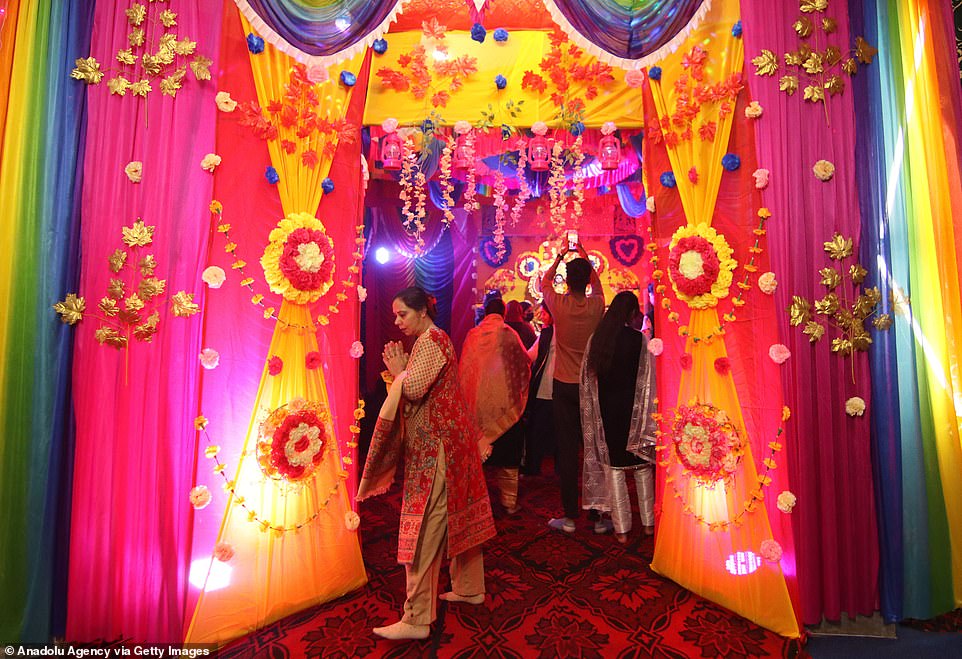 Devotees attend prayers inside a temple during the Diwali celebrations in Srinagar, Kashmir province 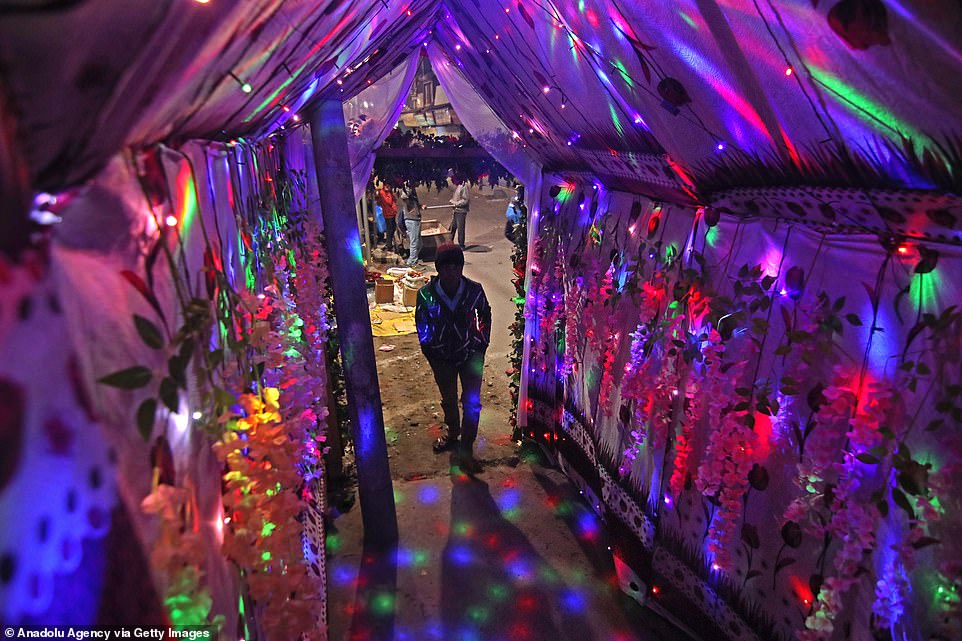 Diwali also known as Deepavali, and the ”festival of lights”, is one of the most popular festivals of Hinduism 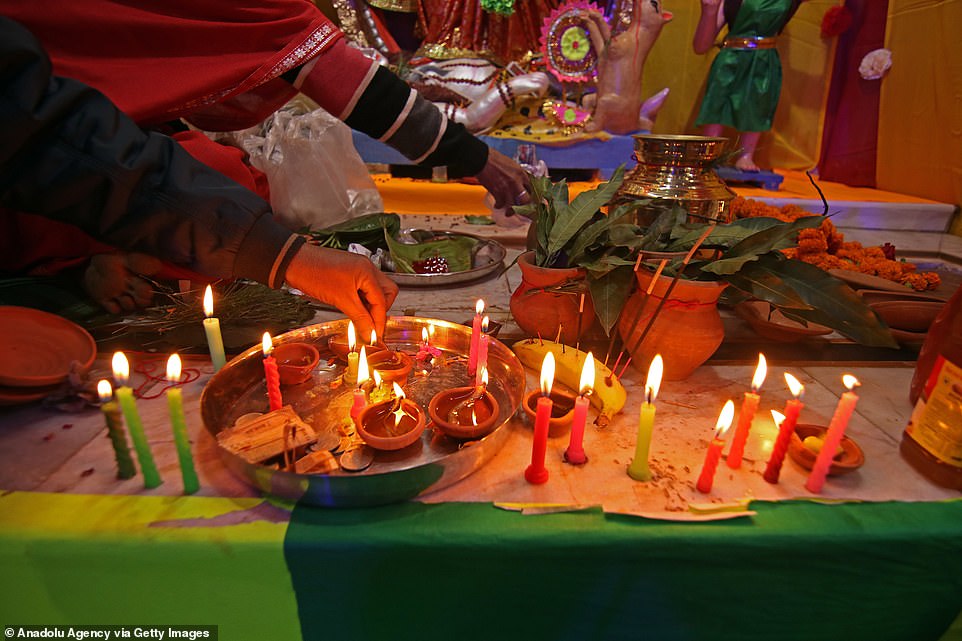 It symbolizes the spiritual “victory of light over darkness, good over evil, and knowledge over ignorance” 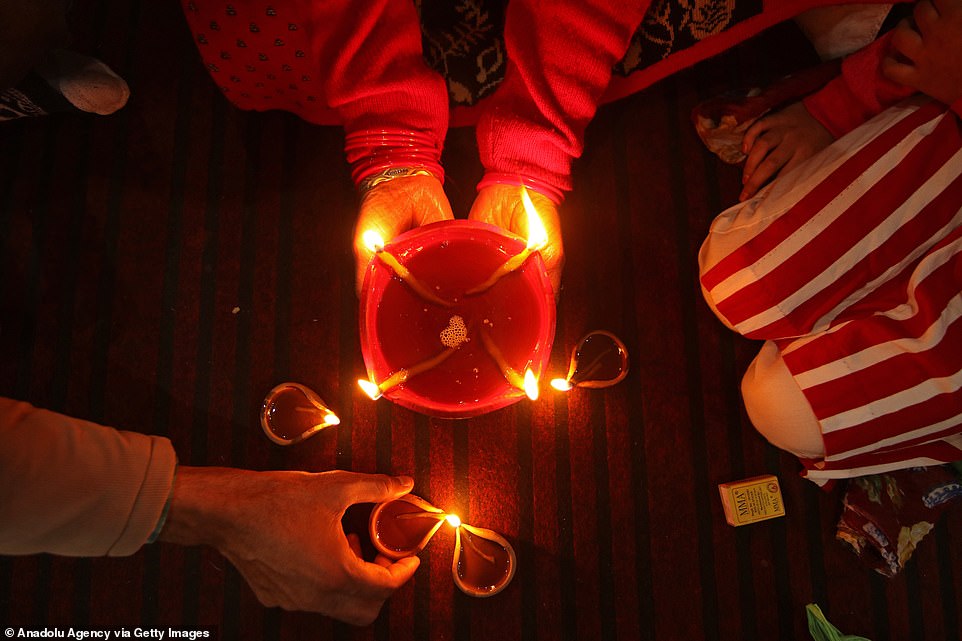 It was Mr Modi’s second visit to the temple since he laid the foundation in 2020 for the construction of the temple. Mr Modi and his party had long pledged to build a temple to Ram where the Mughal-era mosque once stood, in a long-running controversy.

“Lord Ram’s ideals are a beacon of light for people aspiring for a developed India in the next 25 years,” Mr Modi said during his address there.

Over the past few years, Diwali celebrations are tinged with worries over air pollution, which typically shroud northern India under a toxic grey smog as temperatures dip and winter settles in.

Northern India’s pollution woes during the onset of winter mainly stem from vehicular emissions and the burning of crop stubble to clear fields. But on Diwali night people also lit up the sky with firecrackers and its smoke causes smog that sometimes takes days to clear.

Some Indian states, including the capital New Delhi, have banned sales of fireworks and imposed other restrictions to stem the pollution. Authorities have also urged residents to light “green crackers” that emit less pollutants than normal firecrackers but similar bans have often been flouted in the past.

Nick Jonas and Priyanka Chopra enjoyed a family night out with her mother Madhu at the Beverly Hills Hotel on Sunday.

The musician, 30, was seen sweetly holding hands with his mother-in-law while a glamorous Priyanka, 40, chatted to them as they headed to the car.

Nick cut a casual figure in a black leather jacket and sweater, paired with matching slacks and trainers. 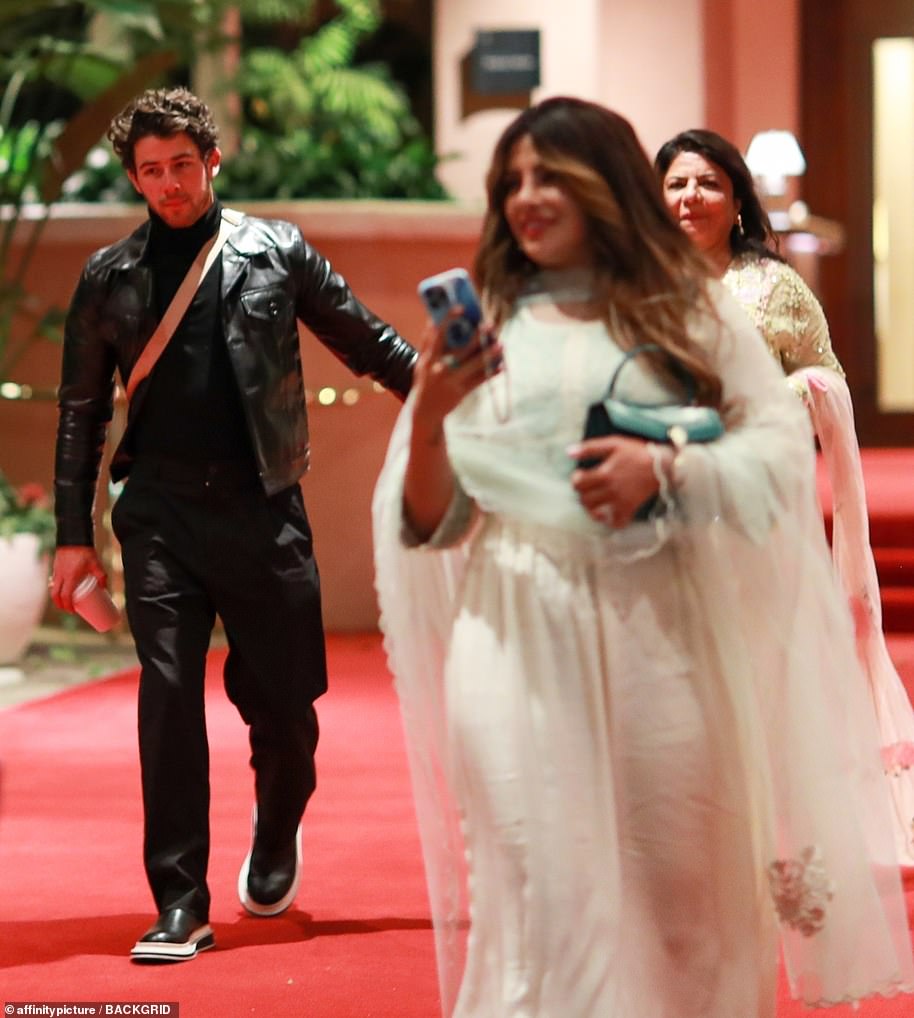 Madhu wore a gold and pink sequin embellished sari for her evening out with her family.

Her tresses were styled in soft waves and she sported a radiant palette of make-up. 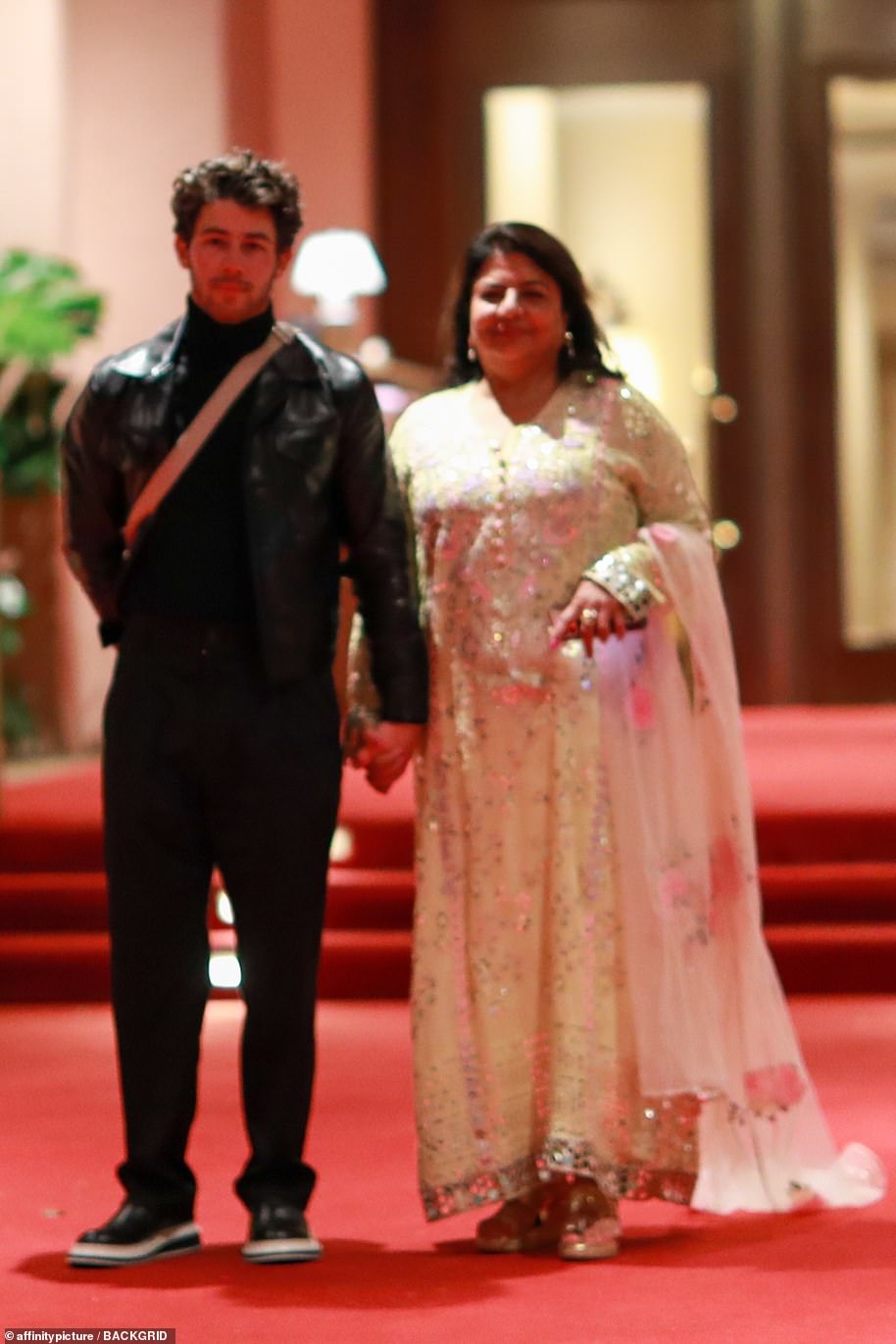 Close bond: The musician, 30, was seen sweetly holding hands with his mother-in-law 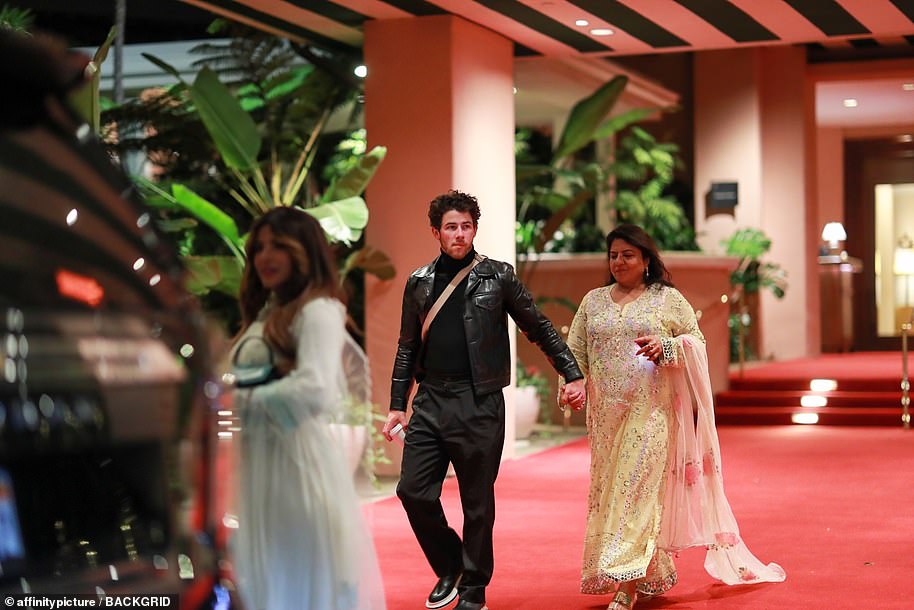 Off they go: Nick cut a casual figure in a black leather jacket and sweater, paired with matching slacks and trainers 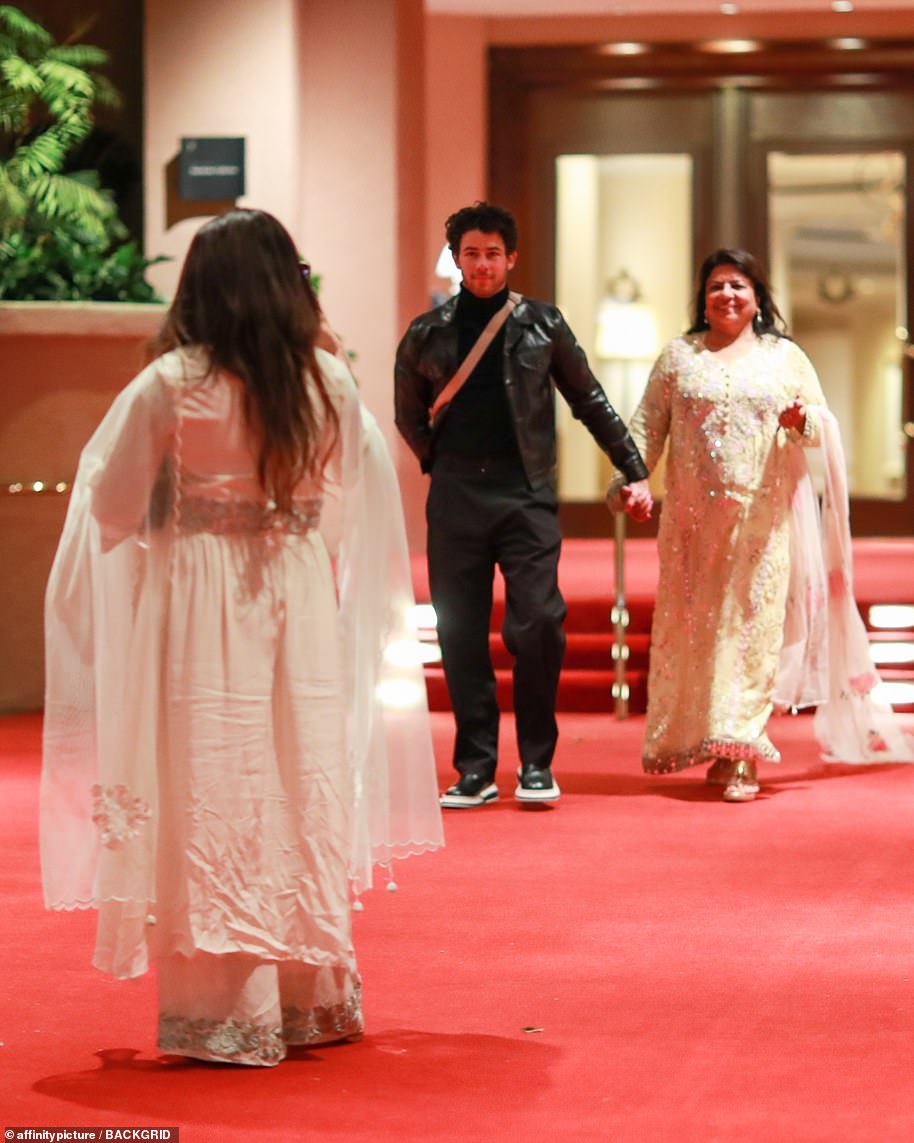 Chat: The group looked in good spirits as they walked out of the hotel

Chopra and Nick Jonas welcomed their first daughter in January this year. Later in the month of May, PeeCee announced that her daughter Malti Marie Chopra Jonas was finally home after spending 100 days in NICU.

‘On this Mother’s Day we can’t help but reflect on these last few months and the rollercoaster we’ve been on, which we now know, so many people have also experienced. After 100 plus days in the NICU, our little girl is finally home,’ she wrote. However, the couple has so far not revealed the face of their daughter.

On the occasion of Mother’s Day on May 9, 2022, Priyanka Chopra posted a photo of herself with husband Nick Jonas and her baby girl.

The actress wrote, ‘On this Mother’s Day we can’t help but reflect on these last few months and the rollercoaster we’ve been on, which we now know, so many people have also experienced.

‘After 100 plus days in the NICU, our little girl is finally home. Every family’s journey is unique and requires a certain level of faith, and while ours was a challenging few months, what becomes abundantly clear, in retrospect, is how precious and perfect every moment is.’

She further mentioned, ‘We are overjoyed that our little girl is finally home, and just want to thank every Doctor, nurse and specialist at Rady Children’s La Jolla and Cedar Sinai, Los Angeles, who were there selflessly every step of the way. Our next chapter begins now, and our baby is truly a badass.

‘Let’s get it MM! Mommy and Daddy love you. Happy Mother’s Day to all the mothers and caretakers in my life and out there. You make it look so easy. Thank you. Also.. there is no one I’d rather do this with than you. Thank you for making me a mama @nickjonas I love you.’