Celebrity surgeon Munjed Al Muderis will be suspended from consulting or operating on osseointegration patients following the revocation of his medical insurance after an investigation by this masthead exposed a litany of allegations about his practice.

Al Muderis’ colleague and fellow orthopaedic surgeon Mustafa Alttahir sent a letter on Wednesday morning to patients informing them Al Muderis would no longer be their treating doctor, after a decision from the insurer to withdraw cover. 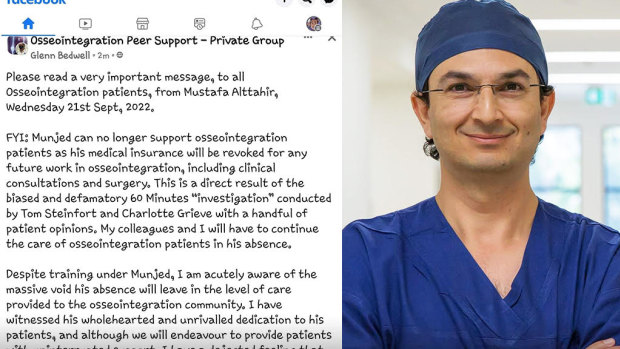 Al Muderis received a notice from his insurer this week informing him of plans to restrict his work, which will be enacted in accordance with his policy terms. MDA National provides cover for the surgeon, according to a number of sources. This is a “doctor-owned medical indemnity insurer that exists only to support and protect our members and promote good medical practice”. It is unclear whether Al Muderis is challenging MDA National’s decision or seeking cover from another insurer.

Alttahir, who passed his Australian Orthopaedic Association fellowship exam in 2018, blamed the media investigation which revealed stories of poor aftercare and high-pressure sales tactics. He expressed concerns about a drop in standards in the absence of Al Muderis’ “wholehearted and unrivalled dedication” to his patients.

“Despite training under Munjed, I am acutely aware of the massive void his absence will leave in the level of care provided to the osseointegration community … Although we will endeavour to provide patients with uninterrupted support, I have a dejected feeling that our efforts will fall far short of any support Munjed has provided and will continue to provide.”

Insurance and negligence expert Geoffrey Watson QC did not want to comment on Al Muderis specifically, but speaking generally said an insurers’ decision to revoke cover is taken “only after a great deal of consideration”.

“It would certainly not be a decision taken lightly or merely on the basis of media reports,” Watson said. “That just does not happen.”

Watson said insurance cancellation was a “very rare” and “extreme measure” and could be in response to a high number of negligence claims against the surgeon.

“A measure taken by an insurer to suspend or revoke coverage is a really dramatic step only taken in the most serious of circumstances, and only after a great deal of consideration,” he said.

“It’s never taken lightly. The practical effect of it is to put the person out of practice.”

Former Alfred Hospital plastic surgeon John Anstee, who performed the first osseointegration in Australia, said he had “never heard of anyone having their insurance cancelled”.

“It’s bloody serious … If you don’t have insurance, you can’t practise in this country,” Anstee said.

The Age, Sydney Morning Herald and 60 minutes has this week revealed the down side of Al Muderis’ osseointegration practice – a procedure offered to amputees where a titanium rod is inserting into residual bone which protrudes through the skin and connects to a prosthetic limb.

While many of Al Muderis’ patients have had positive experiences and are fierce supporters of the surgeon, many have also experienced a range of complications including chronic infection and pain and claim they felt ignored once they raised concerns with their surgeon.

Alttahir’s note blamed a “few disgruntled patients” for jeopardising the care of more than 1000 success stories. He encouraged patients to write to local parliamentary members or the health minister and join a petition in support of the surgeon.

“We all cannot stand idly by and watch this injustice unfold right before our eyes,” he wrote.

However, Canadian patient Ron Broda, who considers himself a “success story”, said there was a “cult following” around the celebrity surgeon and called for a formal investigation into Al Muderis’ practice.

“I’d like to see the Australian government hold a public inquiry to examine all the records of the OGA to find out what the facts are,” Broda said. “I believe the majority [of patients] are going to be successful. But what happens to the ones that aren’t? There needs to be consequences for those that aren’t treated fairly and need proper care.”

MDA National, Al Muderis, and Alttahir were contacted for comment.

Who is Punxsutawney Phil? – The Sun

Who is Officer Eugene Goodman?