Iranian woman, 22, is fighting for life in a coma after being arrested by ‘morality police’ for not wearing a headscarf

A young Iranian woman is in a coma and fighting for her life after being arrested in Tehran by the Islamic republic’s so-called morality police, campaigners said today.

The woman, named as Mahsa Amini, 22, was on a visit to the Iranian capital with her family when she was detained by the special police unit that enforces the strict dress rules for women, including the compulsory headscarf.

Her brother Kiaresh told the IranWire news website that while he was waiting outside the police station for her to be released an ambulance drove out taking her to hospital.

He was told that she had had a heart attack and a brain seizure and was now in a coma. 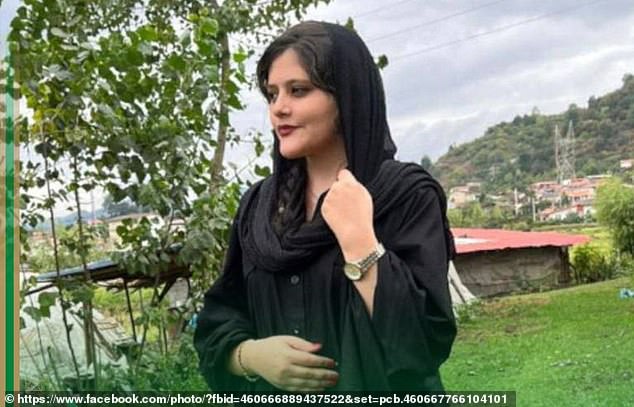 22-year-old Mahsa Amini as identified by IranWire, an online news service run by Iranian expatriates. Ms Amini is in a coma and fighting for her life after being arrested in Tehran by the Islamic republic’s so-called morality police, campaigners said today

‘There were only two hours between her arrest and being taken to hospital,’ he said.

Vowing to file a criminal complaint he added: ‘I have nothing to lose. I will not let this end without making a noise.’

A statement by the Tehran police confirmed she had been detained for ‘explanation and instruction’ about the dress rules, along with other women.

‘She suddenly suffered a heart problem while in the company of other guided people [and]… was immediately taken to the hospital with the cooperation of police and emergency services.’

It is not yet clear what happened between her arriving at the police station and her departure for hospital.

The 1500tasvir social media channel, which chronicles rights violations by the Iranian police, posted a picture of her in hospital with a tube in her mouth and said she was in a coma.

‘Sickening,’ the Iranian-British actress and campaigner Nazanin Boniadi wrote on Twitter. ‘How many innocent young lives must be brutally robbed before we all rise?’

‘Mahsa Amini’s situation is an example of an intentional crime,’ the Iranian freedom of expression campaigner Hossein Ronaghi wrote on social media.

‘The systematic suppression of Iranian women under the pretext of enforcing the hijab by the guidance patrol and the police force is a crime.’

The incident comes as controversy grows – both inside and outside Iran – over the conduct of the gasht-e ershad (guidance patrol) who monitor and enforce the dress code in Iran.

The Islamic hijab has been compulsory for women in Iran since shortly after the 1979 Islamic revolution that ousted the shah.

Some women, encouraged by the US-based campaigner Masih Alinejad, have sought to protest the rule by removing their hijabs in public.

In mid-July, a young Iranian woman, Sepideh Rashno, disappeared in mid-July after becoming involved with a dispute on a Tehran bus with another woman who accused her of removing her headscarf.

She was held by the Revolutionary Guards and appeared on TV in what activists said was a forced confession.

She was released on bail in late August after about one and a half months behind bars.

We don’t want to pick sides: The view from south-east Asia as China woos Pacific

NYPD cops shoot man driving toward them in stolen van