The Foreign Secretary has insisted he is not bothered by a British Empire-era mural in his department that depicts Africa as a naked black boy carrying a fruit basket – after he walked past the artwork with South Africa’s leader Cyril Ramaphosa.

The mural is one of five in the Foreign Office that were completed between 1914 and 1921 by artist Sigismund Goetze.

They line the staircase in the palatial Whitehall building, which itself dates from the 1860s.

The mural featuring the depiction of Africa is called Britannia Pacificatrix. Goetze referred to the child as ‘a little Swaheli boy’, to ‘remind us of our obligations, and the possibilities, in the dark continent.

When she was shadow Foreign Secretary in 2020, Labour’s Lisa Nandy reportedly called on the Foreign Office to remove all five of the murals, which depict the evolution of the British Empire.

Foreign Secretary James Cleverly, whose mother was born in Sierra Leone, was asked by the BBC about the Britannia Pacificatrix mural yesterday after he had welcomed Mr Ramaphosa to the Foreign Office during his state visit to the UK.

Mr Cleverly added that he and Mr Ramaphosa walked past the mural and ‘neither of us looked at it’, because they were ‘too busy talking about the important stuff that we have got to talk about.’ 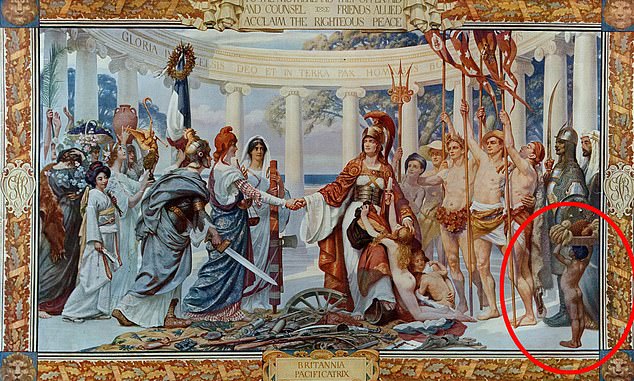 The Foreign Secretary has insisted he is not bothered by a British Empire-era mural in his department that depicts Africa as a naked black boy carrying a fruit basket. Above: In the corner (circled) of Britannia Pacificatrix, there is what Sigismund Goetze referred to as ‘a little Swaheli boy’, to ‘remind us of our obligations, and the possibilities, in the dark continent’ 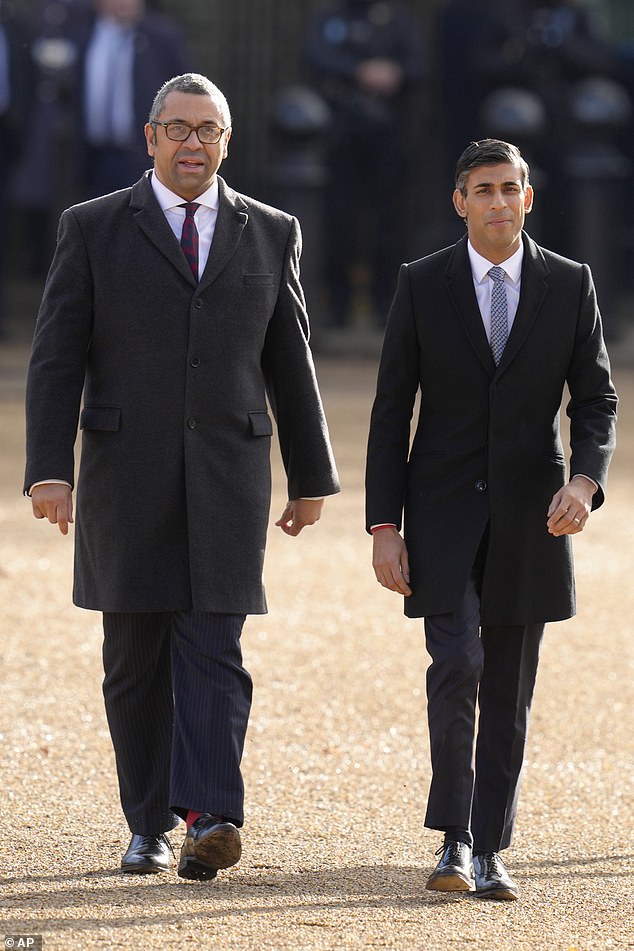 The names of the other murals are: Britannia Sponsa, Britannia Nutrix, Britannia Bellatrix and Britannia Colonorum Mater.

According to the Foreign Office’s online photo album they show the ‘origin, education, development, expansion and triumph of the British Empire, leading up to the Covenant of the League of Nations’.

Goetze took seven years to complete the murals, which cover around 3,000 square feet of canvas.

Britannia Pacificatrix is the final one. It shows Britannia greeting the US and other nations as she is flanked by members of the British Empire, including Canada, Australia, New Zealand and South Africa.

All are portrayed as adults, with only the depiction of the continent of Africa standing out.

Speaking of the mural, Mr Cleverly also told the BBC: ‘It is just over 100 years old. And the depiction of Africa is a small naked child with a basket of fruit. 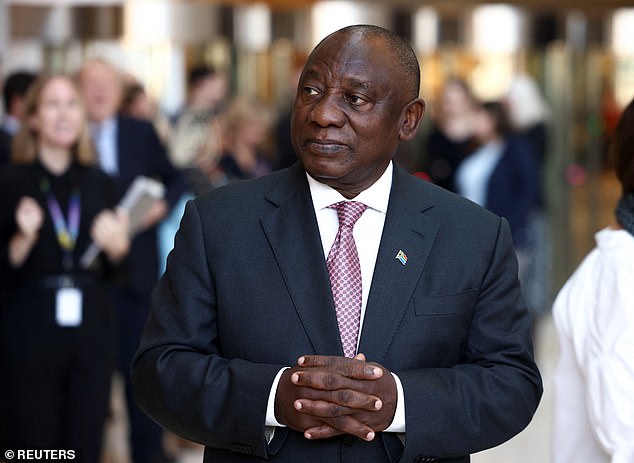 ‘And yet, today we are hosting the President of South Africa as an equal partner on the world stage. Earlier on today I had the opportunity to host the president of Sierra Leone, which is the country of my mother’s birth.

‘And I am a half African Foreign Secretary of the United Kingdom of Great Britain and Northern Ireland.’

He added: ‘I walked past it with the head of state of an African nation three hours ago… neither of us looked at it because we were too busy talking about the important stuff that we have got to talk about.’

In 2020, Ms Nandy wrote to her then counterpart Dominic Raab asking him to set out his views on the murals, according to The Guardian.

She is believed to have expressed her concerns that the murals were expressing how the Foreign Office wished to welcome foreign leaders and dignitaries, and how Britain wanted to portray itself.

Robin Cook, Labour’s Foreign Secretary under Tony Blair, is also said to have felt uncomfortable about the prominence of the murals.

But former Conservative Foreign Secretary Douglas Hurd defended the murals, saying: ‘I hope that none of my successors are ever as humourless as to have these splendidly overblown canvases ever covered.’

American historian Alexander Mirkovic is among the critics of the murals.

Writing in 2014, he said: ‘The racial world of Britannia is ordered, the superior Anglo-Saxons show their naked bodies, but cover their loins, subordinate races, such as Indian and Arab, are fully clothed, and the “least” of races, the African is still a naked infant.

‘Here we have a racial meta-narrative clearly imprinted on the body.’

The academic added that the murals present ‘a message of racial superiority of the Anglo-Saxon race, represented by Britain, indented for the ambassadors on their regular visits to the Foreign Office.’

Their appropriateness came under the spotlight again in the wake of the Black Lives Matter protests in 2020.

What do Goetze’s murals around the Foreign Office staircase show and why are they controviersial?

The five murals decorating the Foreign Office staircase were commissioned in 1914 and finished in 1921 by artist Sigismund Goetze, under the title of the ‘Origin, education, development, expansion and triumph of the British Empire’.

They aim to reveal a history of the Anglo-Saxon race – from the Angles and Saxons landing in Britain, to victory during the First World War – told around the symbolic female figure of Britannia.

Here is an outline of what can be seen in each mural as visitors climb the grand staircase:

This represents the Anglo-Saxons arriving in Britain, associated with legendary brothers Hengist and Horsa coming to Kent in the fifth century.

Britannia stands proudly in this mural, ruling the waves and watching her sons travel to ‘spread the race’ into the colonies and create the world empire.

Along with Britannia Sponsa, the two works present a simple picture that the Anglo-Saxons arrived were nurtured and then left to conquer the world. 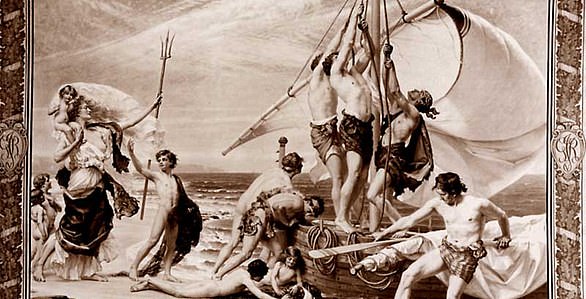 This deals with the ‘adolescent period of the race, where the sons of soil learn the skills of war’.

They are then educated before going abroad to spread the empire. 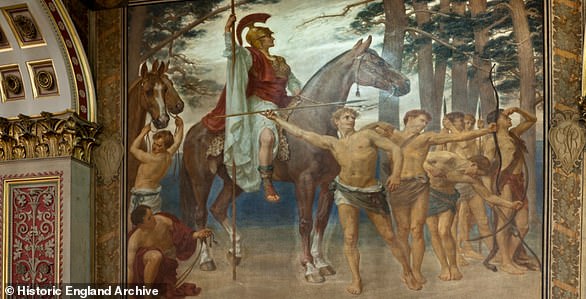 The mural shows a nourishing mother taking care of the infant race.

She also teaches them about the arts of agriculture, music, pottery and spinning.

The final panel shows how the Anglo-Saxon race has achieved the world domination it desired following the British victory in the First World War. All the allies and other nations are deemed less important, while the peace at Versailles is shown as the fulfilment of God’s kingdom on earth.

This is made clear by the words ‘Gloria in excelsis Deo’ (Glory to God in the highest), connected to the birth of Christ, framing the architectural backdrop. But in the corner there is also what Goetze referred to as ‘a little Swaheli boy’, to ‘remind us of our obligations, and the possibilities, in the dark continent’. 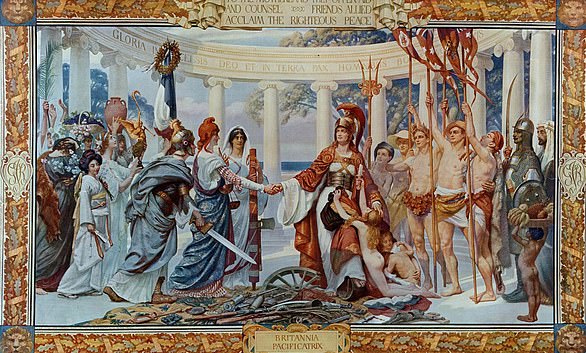 ‘She was in school, the next week she was in a coma’: Victorian teen’s COVID ordeal