Is Britain losing its taste for takeaways now lockdowns are over? Just Eat suffers 7% fall in orders while Deliveroo sales slow and Domino’s take profit hit as pubs and restaurants are back in business

Just Eat has become the latest major takeaway firm to indicate that the pandemic-fuelled food delivery boom is now over, with its total orders falling 7 per cent in the first half of 2022 compared with a year earlier.

The Amsterdam-based delivery giant said today that the drop was due to the lifting of lockdowns and fewer people ordering food to eat at home, while it also suffered a £2.5billion hit over its US-based Grubhub business.

One its big competitors, Domino’s, reported a 16 per cent fall in first-half pre-tax profits yesterday amid rising costs and food inflation, and said it was increasing its media spend to try to lure more customers to buy its pizza.

As for Uber Eats, growth slowed from the prior quarter but the company expects ordering in to become a habit for consumers – and said in its latest results released yesterday that revenues rose 37 per cent to £2.22billion in a year.

Many takeaway firms enjoyed a surge in demand during lockdowns as people had extra disposable income that they were not spending on going out – but this has now been significantly reduced following the reopening of pubs and restaurants in spring last year, and the surging cost-of-living that is squeezing household finances.

Confidence levels among UK consumers fell to a record low last month – with market research firm GfK putting it at negative 41, the lowest reading in all 48 years of its survey – as they struggle with accelerating costs of goods.

Wages are failing to keep pace with inflation that hit a 40-year high of 9.4 per cent in June and is heading for double digits – meaning many Britons are switching from mainstream supermarkets to discounters and from branded to lower priced products, while cutting back on fuel purchases and cancelling streaming services. 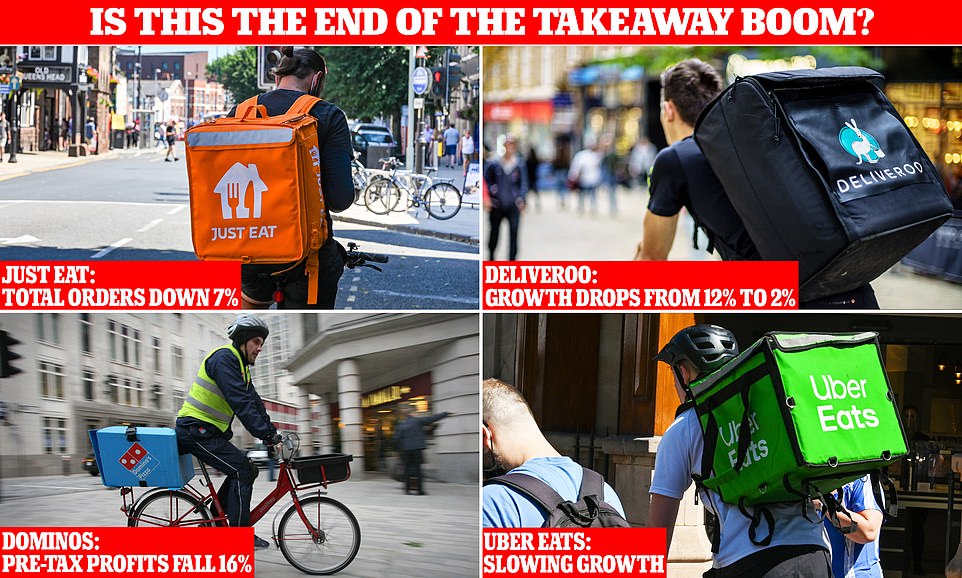 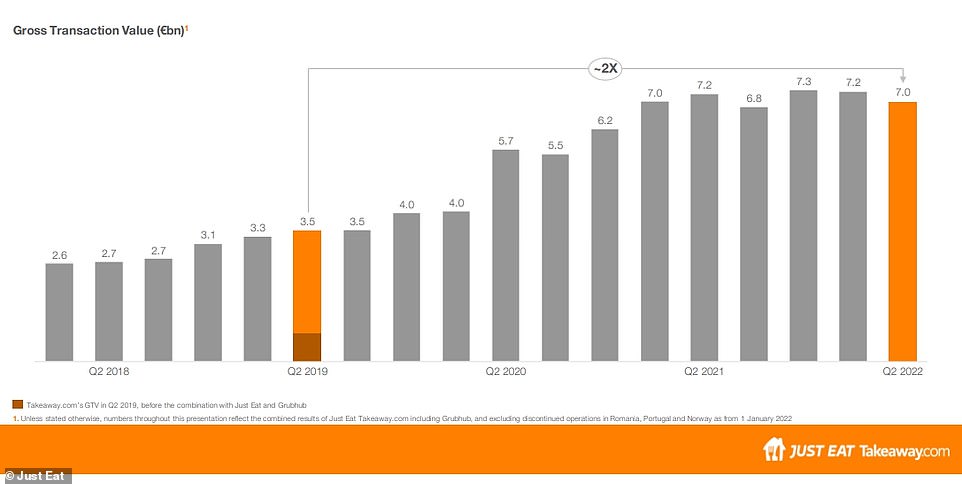 Just Eat said it is now two times larger than pre-pandemic, but this graph shows its Gross Transaction Value (€billion) is falling 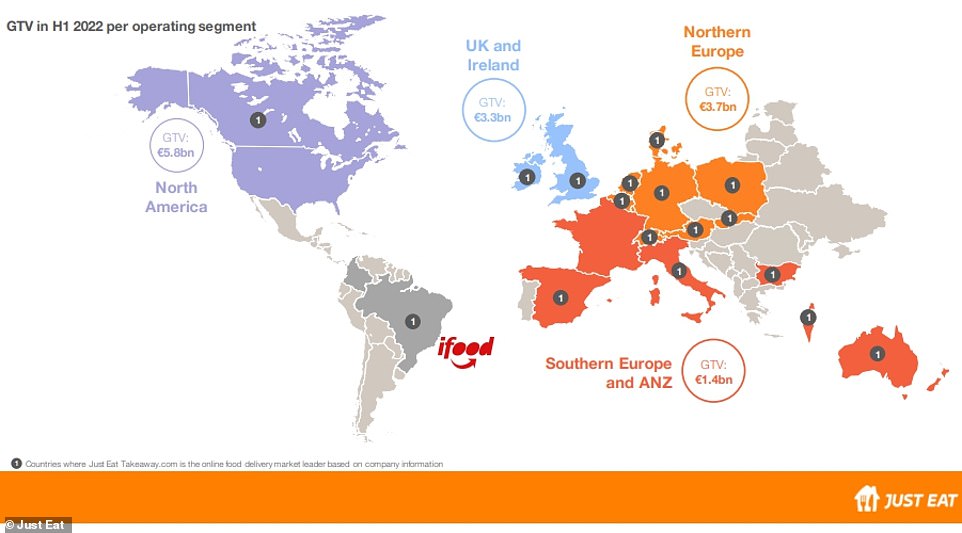 As for Just Eat, the company said today that its ‘path to profitability is accelerating’ as it strives to swing into profit this year – and the group said its first half losses narrowed to £112million against losses of £158million a year ago.

But the Amsterdam-based company took a £2.51billion ‘impairment charge’ – a reduction in the recoverable value of an asset – as it wrote down the value of its US subsidiary Grubhub, which it bought in 2021.

Bakery chain Greggs saw sales jump in the first half of the year as customers turned to value meals amid the cost-of-living squeeze, but warned its cost inflation could hit 9 per cent. 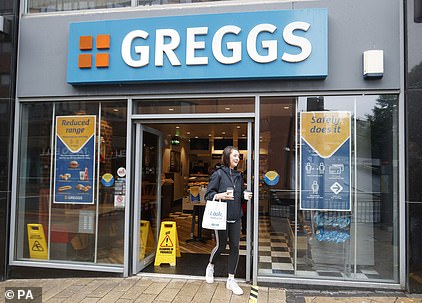 But half-year profits remained largely flat year on year at £55.8million compared with £55.5million last year, due to the reintroduction of business rates, an increase in VAT and higher levels of cost inflation.

With soaring inflation putting a strain on people’s incomes, consumers are more likely to turn to lower-cost food and drink while on the go, Greggs said.

But the chain warned that cost inflation could reach around 9 per cent this year as it is hit with higher prices of food, packing and energy.

In May, the company said customers would see 5p or 10p increases on some items as it was forced to raise prices for the second time this year.

But Greggs has fixed prices with suppliers for around the next five months, meaning the cost of its food and drink should not rise any further in that time, chief executive Roisin Currie said. She added: ‘We know the economic environment is challenging and it is tough out there for our customers, so we are doing everything we can to protect our price proposition.

We are not immune to cost inflation but we are trying hard to mitigate against it impacting customers.’

The boss of the chain – which has more than 2,200 shops in the UK – added that it plans to extend its opening hours, shake up its menu options and offer more delivery services in order to gain more evening sales. The company intends to have 500 shops open until 8pm by the end of the year to target more customers who want hot food in the evening.

She added that menu changes are ‘critical’ and the chain is currently trialling new products including jacket potatoes, and dessert options like hot yum yums with salted caramel sauce and brownies with chocolate dipping sauce.

More than 1,000 of its shops deliver to customers through delivery app Just Eat despite people returning to shops after the pandemic. The average customer spends around £10 on deliveries, roughly three times higher than they would in the shop, Ms Currie added.

In July, the firm announced that Amazon would take a stake in the businesses and Prime subscribers in the US would get free Grubhub+ membership for a year.

Just Eat said today that it is still assessing the financial impact of the deal, and that it is exploring the ‘full or partial’ sale of Grubhub.

Chief executive Jitse Groen said: ‘After a period of exceptional growth, Just Eat Takeaway.com is now two times larger than it was pre-pandemic.

‘Whilst this growth required significant investment, we have continued to focus on executing our strategy to build and operate highly profitable food delivery businesses.’

Revenue also leapt 13 per cent higher year on year in the UK and Ireland, reflecting efforts to improve profits from its individual food sales.

Just Eat spent £346million on marketing in the first six months of 2022, a 40 per cent increase on last year, following the Grubhub acquisition and launching a costly advertising campaign with Katy Perry.

‘I can assure you Katy was not responsible for the marketing costs,’ Mr Groen joked on a call with reporters today.

He said the company would be decreasing marketing spending slightly in the second half, but cautioned that it would remain high given the firm’s overall growth.

The company’s shares are down 60 per cent in the year to date, but rose again by 5 per cent today to around €20 (£17) as investors lauded its focus on profitability, which includes moves to raise restaurant commissions.

The company reported adjusted earnings before interest, taxes, depreciation and amortisation (EBITDA) of negative £112million for the first half of 2022, compared with a loss of £158million a year earlier. Revenues rose to £2.32billion euros from £2.17billion.

Mr Groen said the company’s EBITDA would improve in the second half of 2022 and turn positive in 2023.

Giles Thorne, an analyst with Jefferies, said the first half numbers for Just Eat were worse than expected, but investors would be reassured by the company’s statement that it still expects total order value to grow.

‘There are reasons to believe the full year guidance is pretty robust,’ Mr Thorne said, noting that a post Covid-19 lull is fading and many consumers who began ordering food online during the pandemic will continue due to the convenience.

The results come one day after Domino’s reported a slump in half-year profits after taking a hit from soaring costs despite raising prices for franchisees and introducing a delivery fee.

The UK pizza delivery chain reported a 16.3 per cent drop in underlying pre-tax profits to £50.9million for the six months to June 26.

This comes in spite of moves to offset rising ingredient prices and other cost pressures, including the launch in March of a delivery fee of between 99p and £2.50.

The company said it increased prices for its franchisees but this was on a ‘lagged basis’, meaning that the full benefit will not be felt until the final six months of the year.

The group is expecting profits to be weighted towards the end of the year and kept its full-year guidance unchanged.

Domino’s said it is boosting marketing spend ‘significantly’ to attract more customers, having seen like-for-like sales – excluding what it described as ‘split territories’ – drop 6.4 per cent due to the increase in the VAT rate.

Outgoing chief executive Dominic Paul said: ‘We will be increasing our media spend in the second half compared to the first half, amplifying our value message to customers as we head into key events such as the men’s football World Cup. 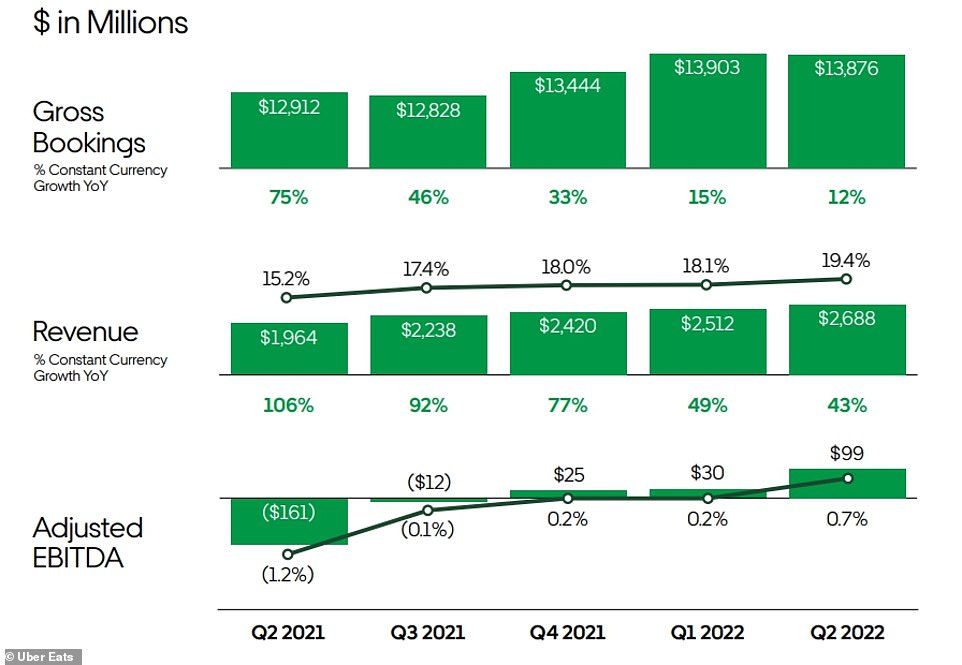 The growth of Uber Eats slowed from the prior quarter – but revenues rose 37 per cent to $2.69billion (£2.22billion) in a year 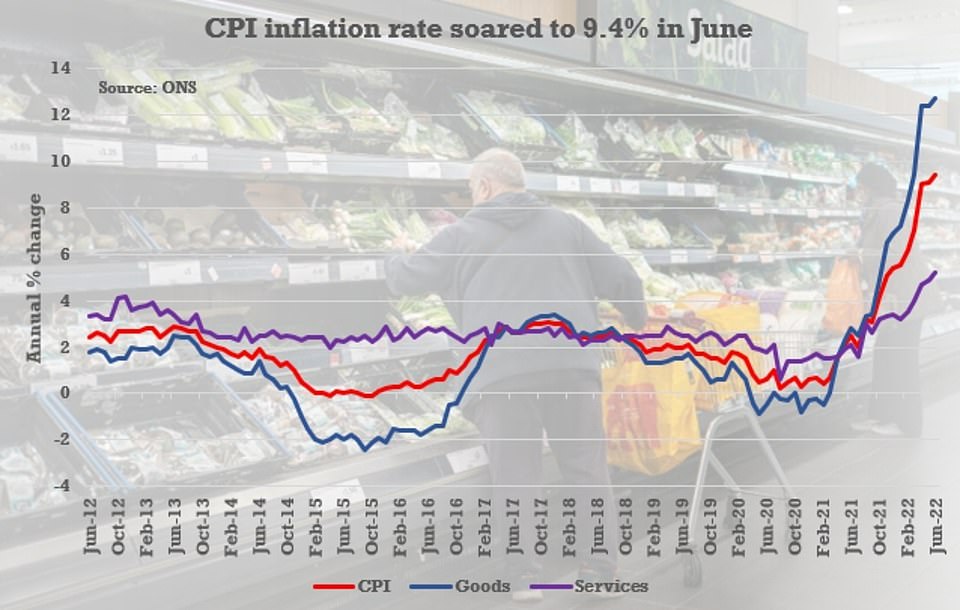 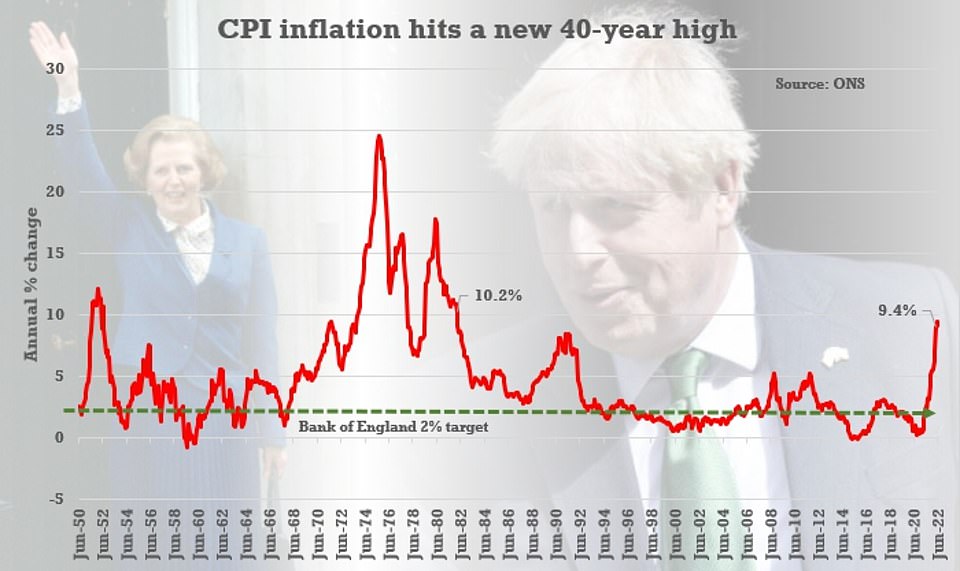 Inflation is now running at 9.4 per cent for June according to the Office for National Statistics – and is expected to rise further

‘We are also continuing to acquire new customers by expanding our trial with Just Eat following positive initial results.’

Direct Line has seen profits almost halve and warned that insurance premiums will be increased to match the soaring cost of claims.

The insurer said supply chain disruption and unusually high used car prices have pushed up claims costs for breakdowns, but premiums have not increased accordingly.

It therefore raised its new business prices by 15 per cent during the first half of the year and said it will take action to bring premiums in line with claims costs.

The company saw its operating profit plunge 47 per cent to £195.5million in the six months to June 30.

The fall in earnings was expected as the group issued a profit warning in July, causing shares to plummet.

There was an unusually low level of claims last year due to pandemic lockdowns when people were not using their cars as much, which Direct Line said partially explains the year-on-year loss.

Gross written premiums also fell by 2.1 per cent to total £1.52billion as the insurer navigated ‘challenging market conditions’, including supply chain disruption holding up the availability of new car parts and pushing up the cost of repairs.

‘However, post-pandemic regulatory changes, the increased cost of paying claims and the macroeconomic uncertainty are weighing on Direct Line’s profitability.’

He added: ‘Domino’s scale and integrated supply chain are always key to our success. As inflation accelerates and consumer budgets tighten, these differentiators are more important than ever.’

Mr Paul recently announced plans to leave in December to head up Premier Inn owner Whitbread. Domino’s is searching for his replacement.

The figures come after the company recently ended a long-running dispute with its franchise partners.

As part of the deal unveiled in December, the group said it had agreed to invest £20million over the next three years, with franchise owners agreeing to increase the speed of new store openings.

It also recently completed an exit from all directly operated international markets to focus on the UK and Ireland.

Last month company Deliveroo on Monday slashed its full-year revenue guidance, as consumers trim their spending amid a worsening cost of living crisis.

Shares in Deliveroo have lost more than three quarters of their value since listing at 390 pence in March 2021.

Deliveroo said second quarter GTV growth slowed to 2 per cent from 12 per cent in the first quarter, missing analysts’ expectations.

It said this reflected ‘the impact of increased consumer headwinds’ during the second quarter. GTV growth was 70 per cent in 2021 when Covid-19 lockdowns boosted demand.

Deliveroo said second quarter growth in orders was 3 per cent year on year, while GTV per order fell slightly year on year, as basket sizes were higher during lockdowns for part of the same quarter last year.

The group did, however, maintain its margin guidance for the year.

It continues to expect 2022 adjusted earnings before interest, tax, depreciation and amortisation (EBITDA) margin to fall by 1.5 per cent to 1.8 per cent, compared with a fall of 2.0 per cent in 2021.

Analysts at Jefferies said the guidance implied a full year loss of £118million.

It had said in March it would break even in about two years as the proportion of revenue spent on marketing in the competitive food delivery sector falls.

What is the voting rights bill?