Now Keir Starmer is forced to self-isolate: Labour leader goes into quarantine for the FOURTH time after one of his children tests positive for Covid – minutes after he was in the House of Commons

Labour leader Sir Keir Starmer has been forced to self-isolate today, minutes after appearing in the House of Commons to grill the quarantining Prime Minister.

One of the Opposition leader’s children tested positive at lunchtime, the party said, forcing him to self-isolate for the fourth time since the pandemic began.

Sir Keir was on the still socially distanced benches of the House of Commons at noon for Prime Minister’s Questions, where he was forced to face Mr Johnson via a videolink from Chequers.

The PM has been self-isolating since Sunday after Health Secretary Sajid Javid contracted coronavirus.

A spokeswoman for Mr Starmer said: ‘One of Keir’s children tested positive for Covid this lunchtime.

‘In line with the rules, Keir and his family will now be self-isolating.

‘Keir was already doing daily tests and tested negative this morning. He will continue to take daily tests.’

It means that the Prime Minister, Chancellor, Health Secretary and Opposition Leader are all currently in quarantine due to the current surge in Covid cases. 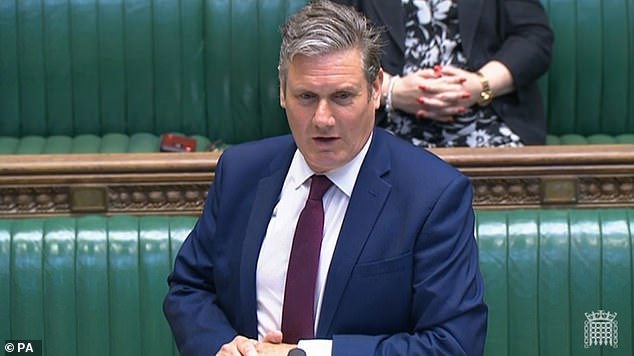 One of the Opposition leader’s children tested positive at lunchtime, the party said, forcing him to self-isolate for the fourth time since the pandemic began. 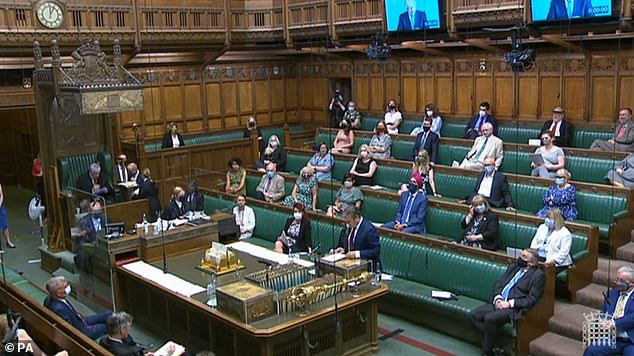 Sir Keir was on the still socially distanced benches of the House of Commons at noon for Prime Minister’s Questions, where he was forced to face Mr Johnson via a videolink from Chequers.

Sir Keir previously had to self-isolate in January this year, and December and September 2020.

He had earlier branded Boris Johnson a ‘super-spreader’ of confusion during a chaotic Prime Minister’s Questions.

He sued the weekly showpiece to attack the Government over self-isolation rules.

Mr Johnson was forced into a humiliating U-turn on Sunday after initially joining a pilot scheme for daily testing as an alternative to quarantine. Within hours he had to row back and agree to isolate after a public outcry at what was seen as a bending of the rules followed by tens of thousands of workers.

Sir Keir added: ‘Of course the Prime Minister and the Chancellor spent the weekend trying to dodge isolation altogether. The British people are trying to follow the rules, how can they when his ministers keep making them up as they go along?

Mr Johnson replied: ‘No… isolation is a very important part of our armoury against Covid. We’re going forward, as everybody knows, to a new system on August 16 based on testing but in the meantime when you’re advised to isolate to protect others and to protect your family against the spread of the disease then you should do so.’

The Labour leader today warned the country faces a ‘summer of chaos’ as he highlighted policy changes over isolation exemptions for people pinged by the NHS app and vaccine passports for nightclubs.

He added Mr Johnson’s new three-word slogan should be ‘get a grip’, amid reports it will be ‘keep life moving’.

Ad he quipped: ‘I think we need to check that the line at Chequers is working because the Prime Minister’s answers have no resemblance to the questions I am actually asking him.’

But the Prime Minister, dubbed the ‘Chequers one’ by Sir Keir due to his appearance virtually from isolation at the country retreat, described the Opposition leader’s questions as ‘feeble stuff’ and defended his decisions during the pandemic.

Downing Street came under fire today after several Tory MPs sat in the House without masks on.

Asked whether the Prime Minister would be telling them to do so in future, his press secretary said: ‘I think the Prime Minister has been clear about the importance of wearing masks in enclosed settings where you come into contact with people you don’t normally meet.’