London: Charles became King on the death of his mother on Thursday, but will not be crowned until next year, it is understood.

His Coronation will be a streamlined event compared to the service for his mother seven decades ago and will reflect the new King’s vision for a smaller, more modern monarchy. 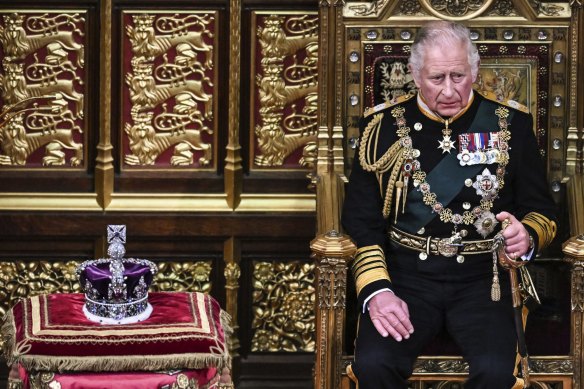 Britain’s Prince Charles sits by the The Imperial State Crown in the House of Lords Chamber, during the State Opening of Parliament, in May 10, 2022. Credit:Ben Stansall/AP

King Charles III will be crowned alongside Camilla after his mother announced that it was her wish for her to be the Queen Consort as part of her Jubilee celebrations earlier this year.

It is likely that the Coronation will take place in the spring or summer of next year after a period of mourning.

The service, the only remaining religious coronation in Europe, will be shorter and less expensive than Queen Elizabeth II’s in 1953.

By convention, palace aides insist that details of the Coronation of a successor are not discussed in advance out of respect for the reigning monarch. 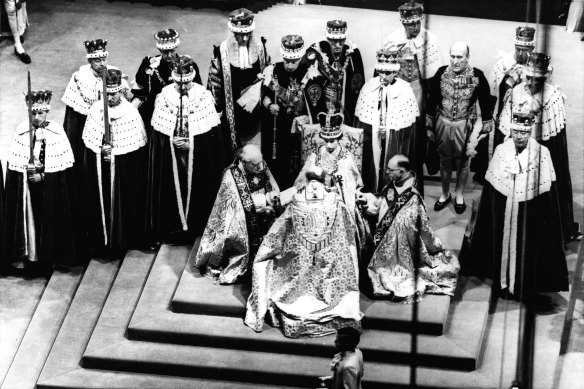 Charles has said he wants a less elaborate coronation ceremony than the one in which his mother ascended the throne in 1953.Credit:AP

It is also unlikely that the ceremony will be at the forefront of the King’s mind after the death of his mother, with whom he enjoyed a close relationship.

But plans have quietly been drawn under the codename Operation Golden Orb. Due in part to the Queen’s age, discussions have been ongoing for a number of years.

Sources have said that it will be shorter, smaller, less expensive and more representative of different faiths and community groups. King Charles is also said to have expressed a wish that it reflects the ethnic diversity of modern Britain.

Queen Elizabeth was crowned on 2 June 1953, 16 months after the death of her father King George VI, and when King Charles was just four years old. It was a moment of national celebration that cheered the post-war nation. 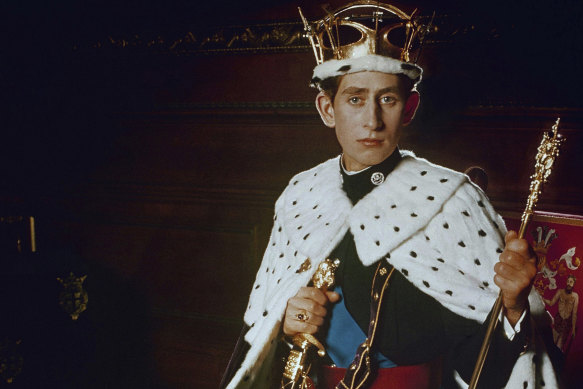 In this 1969 file photo, Britain’s Prince Charles, poses for a photo dressed in his investiture regalia as Prince of Wales. Credit:AP

The Palace will want King Charles’ Coronation to be a similarly joyous moment, and so will give the nation time to mourn and plan an event for the spring or summer when the weather is warmer. King Charles has also been planning to hold the ceremony earlier in his reign than his mother did.

According to the royal family’s website: “The coronation ceremony, an occasion for pageantry and celebration, but it is also a solemn religious ceremony, has remained essentially the same over a thousand years. For the last 900 years, the ceremony has taken place at Westminster Abbey, London. The service is conducted by the Archbishop of Canterbury, whose task this has almost always been since the Norman Conquest in 1066.”

The ceremony will include the coronation oath required by statute and many of the ceremonies in this mother’s service, such as anointing with consecrated oil by the Archbishop of Canterbury, the delivery of the orb and the enthroning. 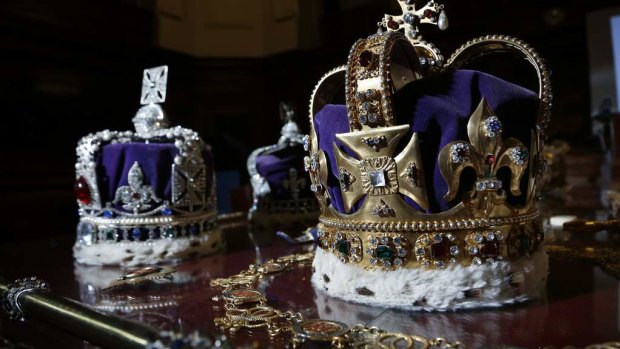 A replica of the Imperial State Crown and the St. Edward’s Crown on show at the Museum of Australian Democracy.Credit:Jeffrey Chan

Like Queen Elizabeth II, the King will be crowned with the St Edward’s Crown, which is made of solid gold and has more than 400 gemstones, including rubies, garnets, sapphires.

More than 8000 guests from 129 nations representing the empire travelled to Westminster Abbey for the 1953 coronation. It was so packed that the dignitaries were accommodated on makeshift benches.

In contrast, and reflecting the health and safety considerations of the modern age, this time guests will be limited to a maximum of 2000. Commonwealth leaders and a diversity of religions will be prioritised among the congregation.

Sources have said that the service will be “far shorter” than the three hours for Queen Elizabeth II, not least because the new King is 73.

It is believed that with his mother’s blessing he had changed his coronation vows a number of years ago to include “Queen Camilla”, but the plan was only announced by the Queen this year.

The change was said to have been made during a wider rewriting of the service to bring it up to date.

The Queen Consort will have the platinum and diamond crown made for the Queen mother’s coronation in 1937 placed on her head. One of the 2800 diamonds in the crown is the controversial Koh-i-Noor or “Mountain of Light” diamond which was gifted to Queen Victoria but which some claim was stolen from India.

Camilla is the first consort to be crowned since 1937, as Prince Philip, as a male consort, was not entitled.

The government pays for the Coronation and the King has reportedly expressed a wish that his service is considered “good value”.

After the ceremony King Charles is expected to be seen on the balcony of Buckingham Palace alongside the slimmed-down Monarchy which will be the feature of his reign. It is thought he may only be joined by his Queen and the Duke and Duchess of Cornwall and Cambridge and their children.

According to a briefing document for Parliament on the Coronation: “On the death of the reigning monarch, the person entitled to succeed to the throne does so as soon as his or her predecessor dies, as summed up in the phrase: ‘The King is dead; long live the King!’”

This is because of the “common law that the King never dies”.

King Charles will likely make an Accession Declaration to his Privy Council in the coming days before a Coronation Committee, composed of privy counsellors, is appointed to make the arrangements for his Coronation.

It is unlikely arrangements will begin before the end of a month of court mourning for the late Queen.

Pfizer-BioNTech target December to roll out of vaccine in Europe