Business Secretary Kwasi Kwarteng has accused trade unions of ‘bribing’ workers to go on strike ahead of a ‘summer of strike chaos’.

Millions of Britons are set to suffer transport misery next week due to the biggest rail strike in decades.

Members of the Rail, Maritime and Transport union (RMT) will walk out on 21st, 23rd, and 25th June with the action set to bring the train network to a standstill.

It is feared the rail strike could be just the start of a ‘summer of discontent’ of industrial action by unions across Britain, with further rail walkouts planned.

Strikes have also been threatened in local councils, on bus networks and in schools.

It has been revealed how Unite has been offering £70 a day strike pay to staff.

Meanwhile, Unison have increased their strike pay from £25 a day to £50 from the very first day of action.

The union said this was to ‘put itself and our members in the best possible position to win disputes’. 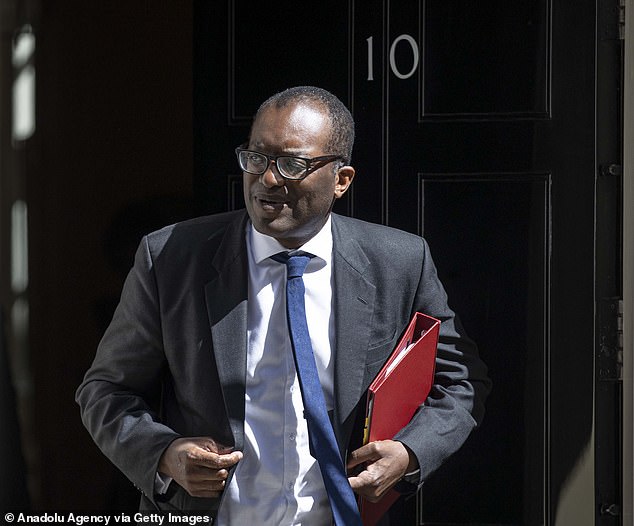 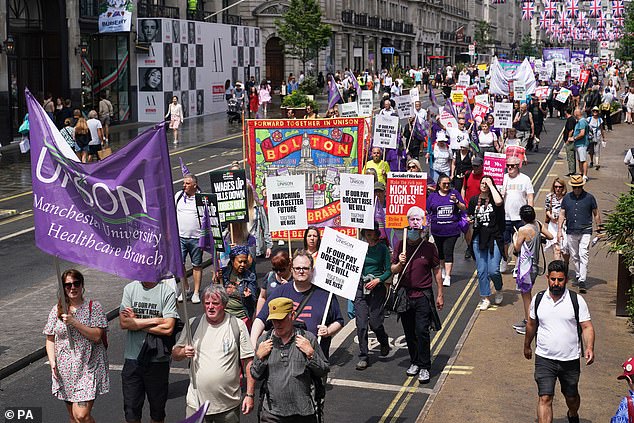 Unison, whose members took part in a demonstration in London yesterday, have increased their strike pay from £25 a day to £50 from the very first day of action 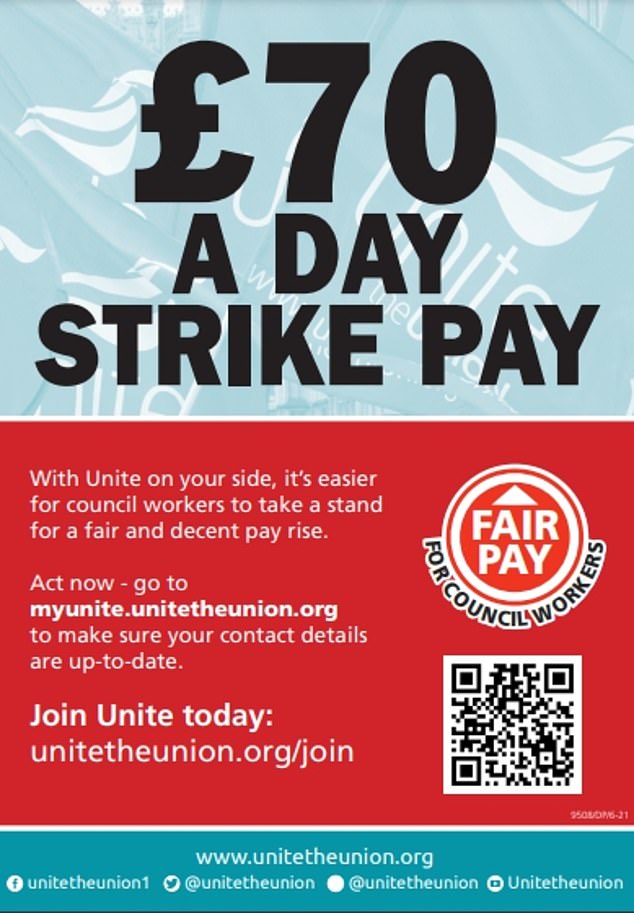 Both Unison and Unite have strike fund reserves of around £35million each.

Mr Kwarteng told the Sunday Telegraph the figures showed ‘militant trade unions’ had been amassing cash ahead of possible strike chaos this summer.

‘It’s clear they’ve been plotting this for some time. Looking at the figures, this plan of theirs is designed to inflict maximum damage on millions of people for as long as possible,’ the Business Secretary said.

‘We are looking at every possible avenue to ensure public services can be maintained.’

He added: ‘It’s obvious that trade union chiefs have been quietly amassing a war chest to effectively bribe workers into unleashing a summer of strike chaos.’

But the unions hit back at ‘fantasy’ claims by ministers.

A Unite spokesman told the newspaper: ‘We want to build the strength of the union to ensure that workers are not forced to pay the price of the pandemic.

‘Unite’s strike fund has grown in recent years to ensure our members have adequate financial protection if, as a last resort, they are forced to take strike action.

‘The idea that this is part of some massive, co-ordinated union plot is the stuff of fantasy.’

A Unison spokesman said: ‘This is utter nonsense. Last year the Government was full of praise for key workers for their pandemic efforts, now ministers are trying to start a fight with the same low-paid health, care and council staff.’