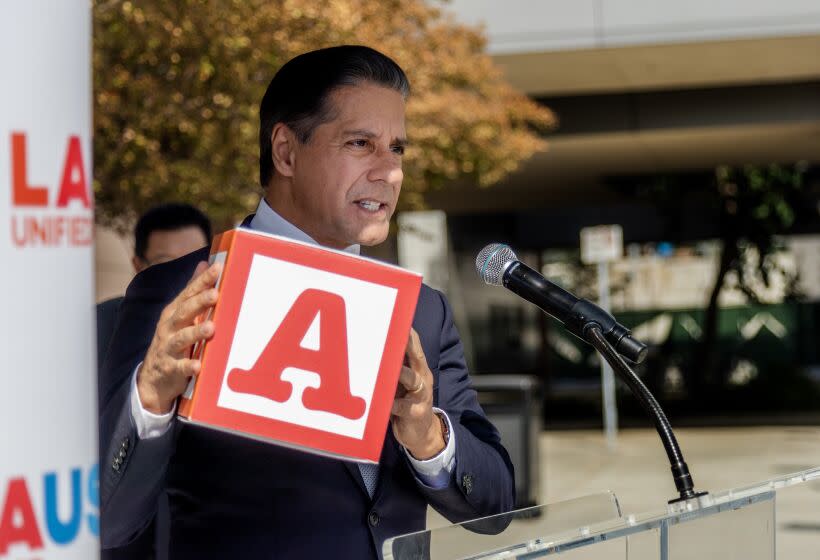 It's not every day that the superintendent of the nation's second-largest school district can be heard touting blankies and onesies. But on Tuesday, Los Angeles schools chief Alberto Carvalho launched a student recruitment campaign beginning just about as early as possible — targeting newborns in maternity wards, starting with L.A. County-USC Medical Center.

In a school system confronting troubling enrollment projections — a 30% decline over the next decade — the "Born to Learn" campaign is part inspiration and perhaps part desperation.

Carvalho is out to pitch an L.A. Unified School District education to the parents of prospective students — even before the babies have lost their umbilical cords.

And there's swag contained in a cheery 8.5-inch cardboard cube with LAUSD-branded gear: a beanie, a onesie, a bib and a plush blanket that Carvalho could not resist referring to as a "blankie."

"You have to have some swag if you're born right here," he said.

The ambitions for the effort are lofty.

The box also contains information that lays out developmental milestones by age and what a child should be learning at that time.

It's an "easy-to-understand process that aligns activities,cognitive development, physical development with the age of the child," Carvalho said as he worked his way through one box.

Also inside is a congratulations letter "on behalf of the Los Angeles School District community" — signed by Carvalho on letterhead with the names of the seven board of education members.

"Los Angeles Unified is committed to supporting your child and providing the resources necessary to ensure their success," says the letter, which adds that the items enclosed are "a small token of our gratitude for you and in celebration of this joyful moment."

There's also a pamphlet with instructions on when to enroll in early education — as soon as age 2 — along with a pitch for the following years.

The entry for "Age 5 – 18+" notes, "There are many high-quality and specialized programs available in L.A. Unified," listing some of them — "dual language schools, STEM magnets, music and the arts, sports and more" — along with a web address.

The hospital's charitable foundation and wellness center already offer most of the services Carvalho spoke of, including help for families to obtain healthy food as well as classes on parenting and child development, said Rosa Soto, director of the hospital's foundation.

Now there's the addition of public education, which extends the timeline of help, she said.

"We want to make sure that we're really wrapping ourselves around — in terms of support — to the family and to the small child that's about to be born," Soto said, adding: "Our priority is that pathway to a better experience, a healthy home environment and a healthy community environment."

The hope is that more families will receive timely assistance and L.A. Unified will get a leg up in enrolling the 1,000 babies per month born at County-USC Medical Center — and later expand the effort to more hospitals.

That may sound like a lot of babies, but even if every child eventually enrolls in LAUSD, they may be too few to reverse the expected decline of about 3% per year. There are about 422,000 students in the school system.

The hospital did not make expectant parents or the parents of newborns available to talk about their educational aspirations for their babies.

But the box did contains a mock-up of a high school diploma.

"This is how we say we care so much about you," Carvalho said, "that we're going to be with you all the way through."

Adviser suggests Biden still wears mask outside out of habit