Terrifying video documents the moment an innocent bystander became the 13th victim this year — and the third in just one week — to be pushed onto the subway tracks in New York City.

Video released by the New York Police Department on Saturday shows a man wearing a yellow sweatshirt under a black jacket with jeans and black-and-white sneakers standing with his arms crossed on the northbound L train tracks at the Wyckoff Avenue and Myrtle Avenue subway station in Brooklyn on Friday afternoon.

He soon watches as a 32-year-old man in a black jacket and jeans, and carrying a large blue duffel bag, passes by on the crowded track — and proceeds to drop the gray backpack he is carrying.

The maniac looks both ways — as if making sure there are no cops on the scene — before he sprints and tackles the man, leading with his shoulder and hand to knock the victim off his feet.

The unsuspecting victim then fell sideways and tumbled onto the subway tracks, leaving his sunglasses behind on the crowded platform.

At that point, the attacker runs back to where he let his backpack and escaped through the turnstiles. 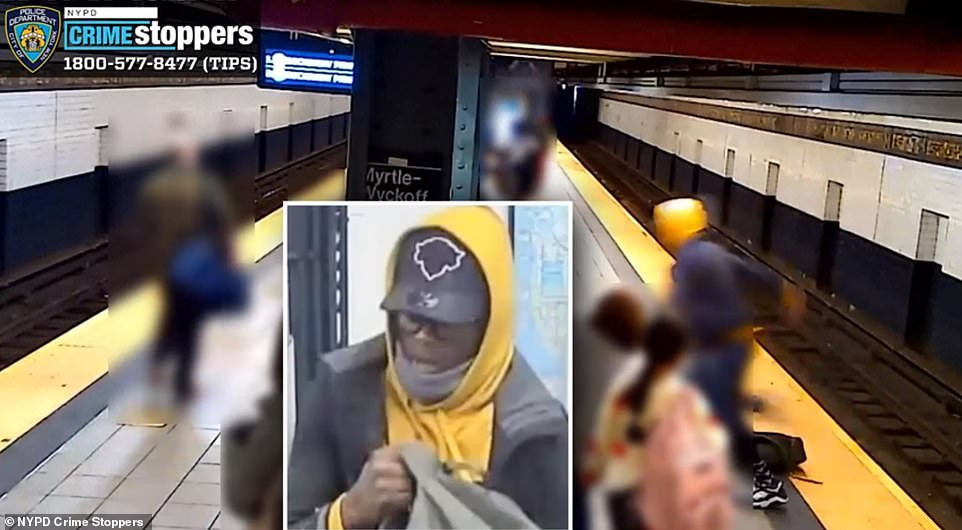 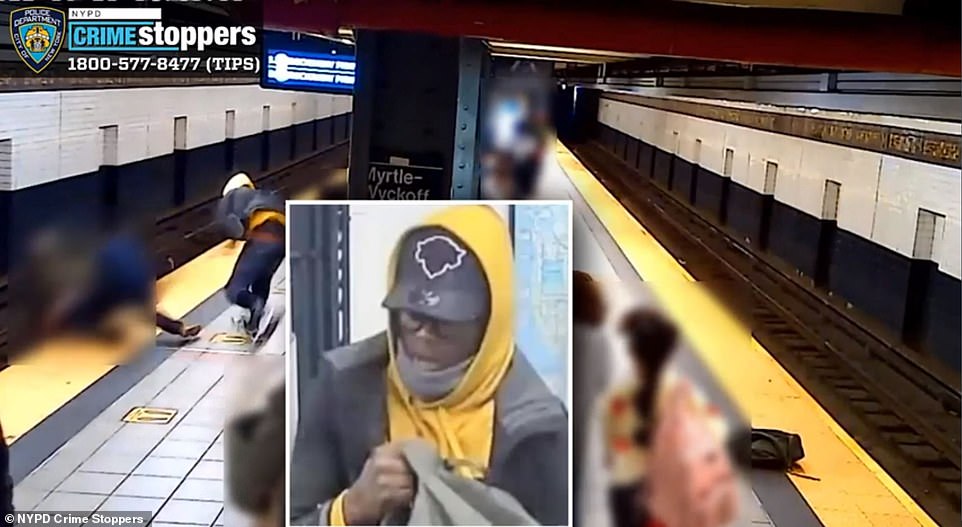 The unidentified suspect then tackles the man, leading with his shoulder and hand to knock the victim off his feet

Authorities say the victim was wounded, but was not hit by a train, and a transit worker told the New York Post the victim only suffered an injury to his shoulder.

‘He was just in shock that it happened to him,’ the worker said. ‘It was just a random shove. He just got shoved into the tracks — that’s what he said.

‘This guy pushed him into the tracks.’

Anyone with information about the suspect is asked to call the New York Police Department’s Crime Stoppers Hotline at 1-800-8477 or submit an anonymous tip online.

But Friday’s attack marks the 13th time this year a subway passenger was shoved onto the subway tracks — and the third in just one week even though New York City Mayor Eric Adams has said the growing crime wave on the city’s subway system is just a ‘perception.’

On Monday, Heriberto Quintana, 48, was struck by an F train at the Jackson Heights-Roosevelt Avenue station at 74th Street and Broadway in Queens at the height of rush hour.

Police say Carlos Garcia, 50, was standing on the platform when Quintana bumped into him as he walked by, which knocked the suspect’s cellphone on to the subway tracks, sources tell NBC4.

The suspect then demanded Quintana go get his phone and when he refused, the two began arguing in Spanish and a shoving fight ensued.

During the scuffle, Quintana was knocked on to the tracks and was struck by an oncoming F train. He was later pronounced dead at Elmhurst Hospital

Garcia was later arrested and charged with manslaughter over Quintana’s killing.

And on October 15, surveillance footage showed Miguel Ramirez, with wide-eyes and unkempt hair, stalking German Sabio, 26, at 149th Street in the Bronx at 11:50am.

Ramirez then ran behind Sabio and pushed him in to the path of the oncoming train before fleeing the station as other, shocked onlookers rushed to the victim’s aid. They were able to pull him to safety before the train rushed through the station.

Sabio was later transported to a nearby hospital.

Ramirez has since been charged with attempted murder, assault, assault with intent to cause serious physical injury, causing injury through risk of death and reckless endangerment. 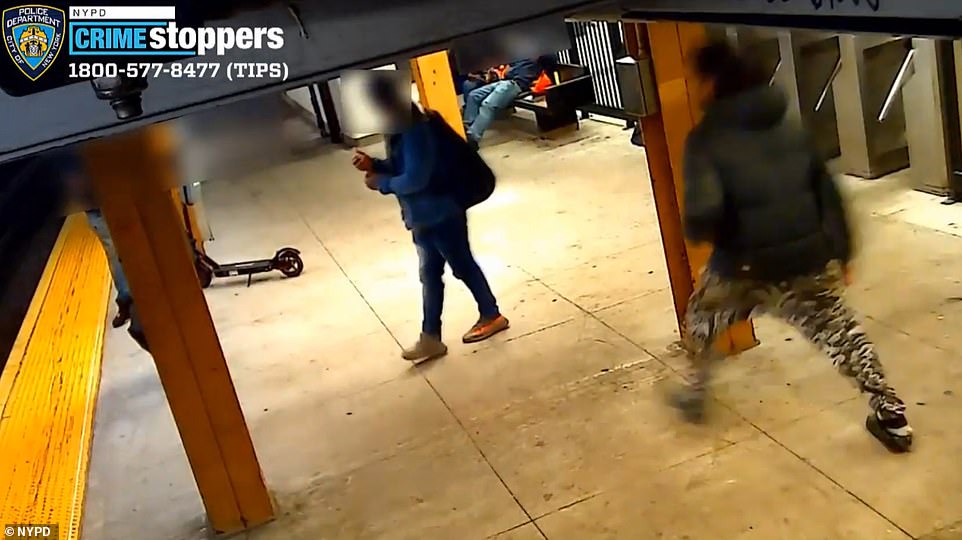 On October 15, surveillance footage showed Miguel Ramirez, with wide-eyes and unkempt hair, stalking German Sabio, 26, at 149th Street in the Bronx at 11:50am 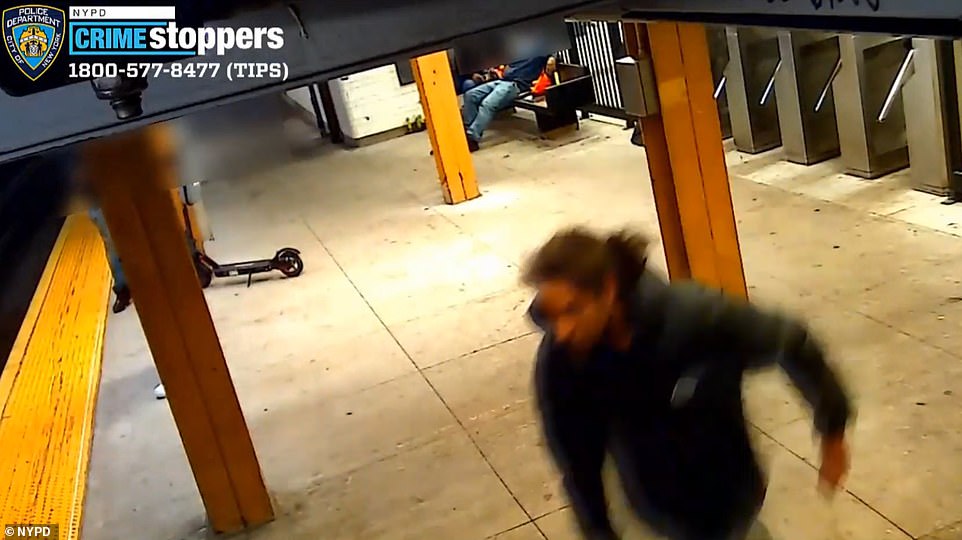 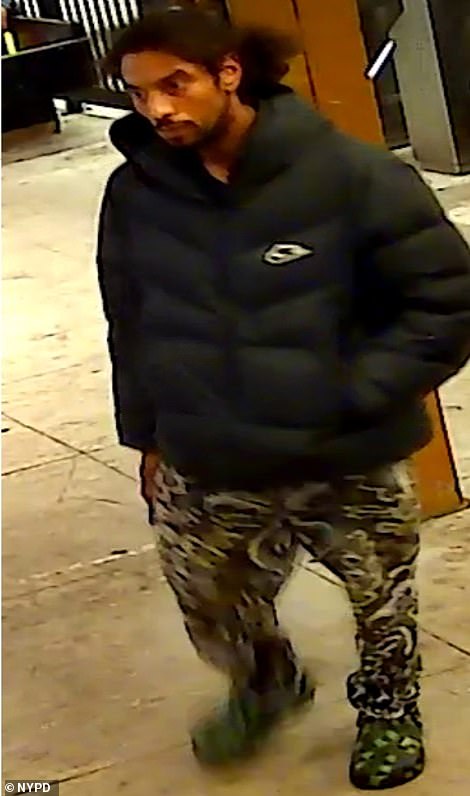 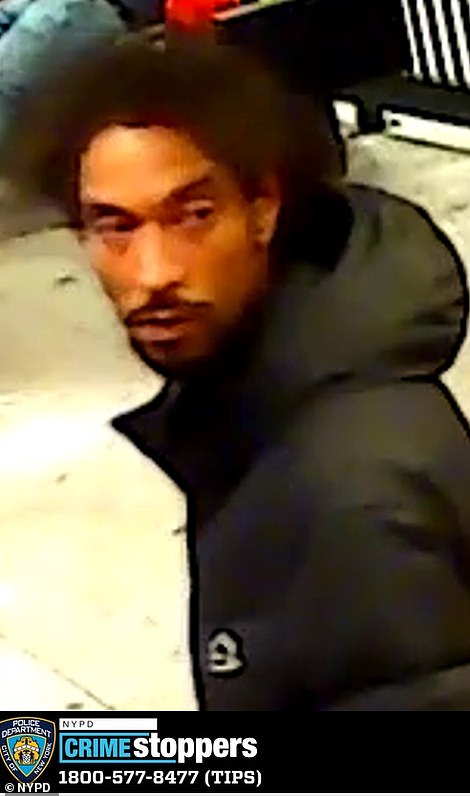 Ramirez has since been charged with attempted murder, assault, assault with intent to cause serious physical injury, causing injury through risk of death and reckless endangerment.

Meanwhile, recent data shows that subway murders have risen to their highest level in 25 years even as ridership plummets.

Between 1997 and 2020, there were never more than five murders a year on New York City subway trains.

That number rose to six in 2020, eight in 2021 and it’s already at nine with four reported in just the first few weeks of October.

Last week, 15-year-old Jayjon Burnett was shot dead by a known gang member on a Far Rockaway A train just days before his 16th birthday.

Keyondre Russell, 18, was charged with Burnett’s murder in the second degree and two counts of criminal possession of a weapon.

Charles Moore, 38, and a father was also stabbed in the back and chest after leaving a northbound four train in the Bronx at 10.30pm on October 6.

Saquan Lemons, 27, was arrested for allegedly stabbing Moore. The attack was random and unprovoked, according to police.

And at the end of September, father-of-three Tommy Bailey was slashed in the neck and killed by a homeless man on the L train to Atlantic Ave Station in Brooklyn.

At the time, he was trying to intervene when Alvin Charles started harassing a female NYPD officer.

During an argument between the pair, Charles pulled out a knife and stabbed the 43-year-old steamfitter in the neck. 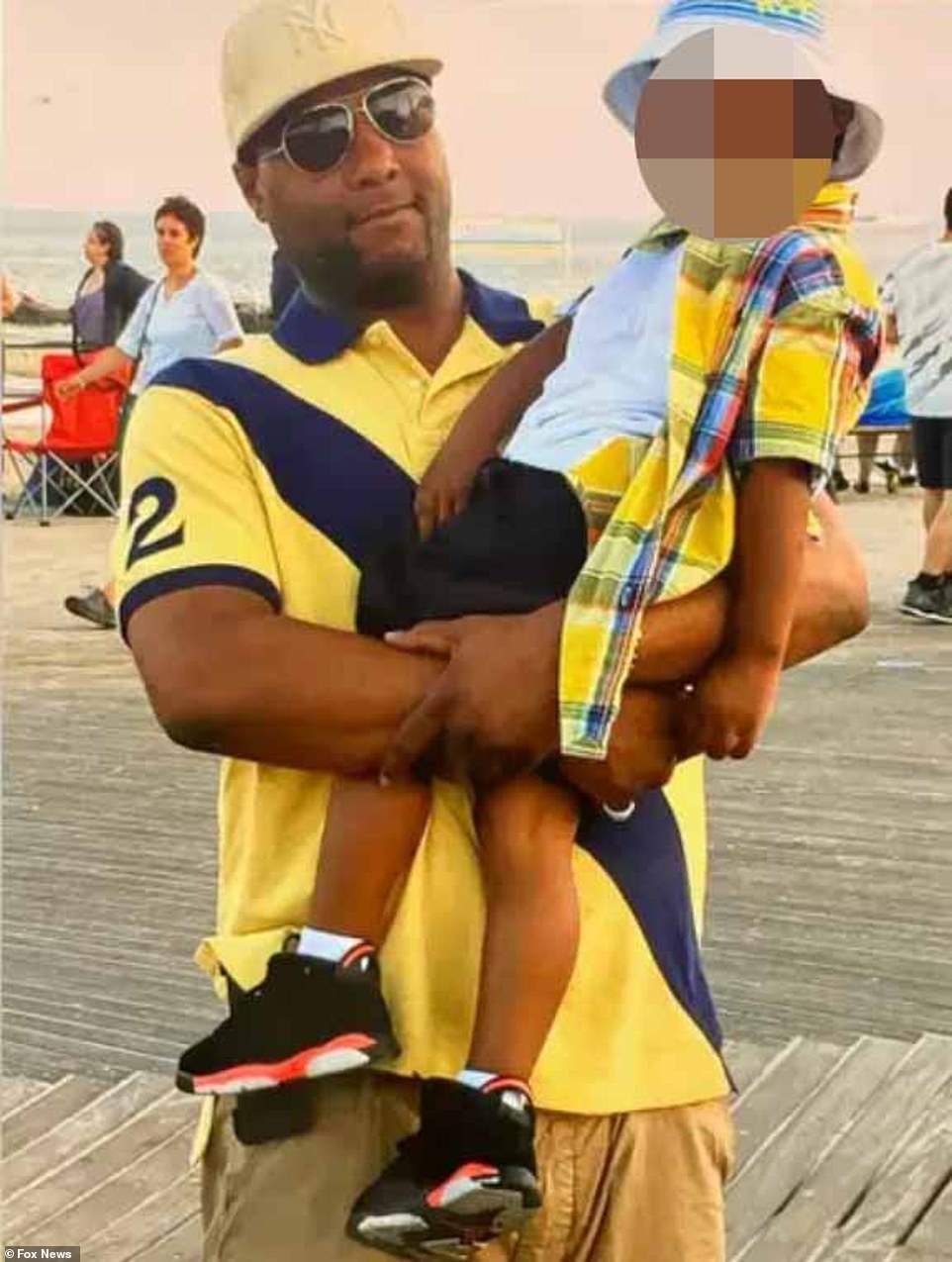 Tommy Bailey, 43, was onboard the L train to Atlantic Ave Station in Brooklyn when he got into an argument with homeless passenger Alvin Charles, who was harassing a cop on September 30. The homeless man pulled out a knife and slashed Bailey in the throat 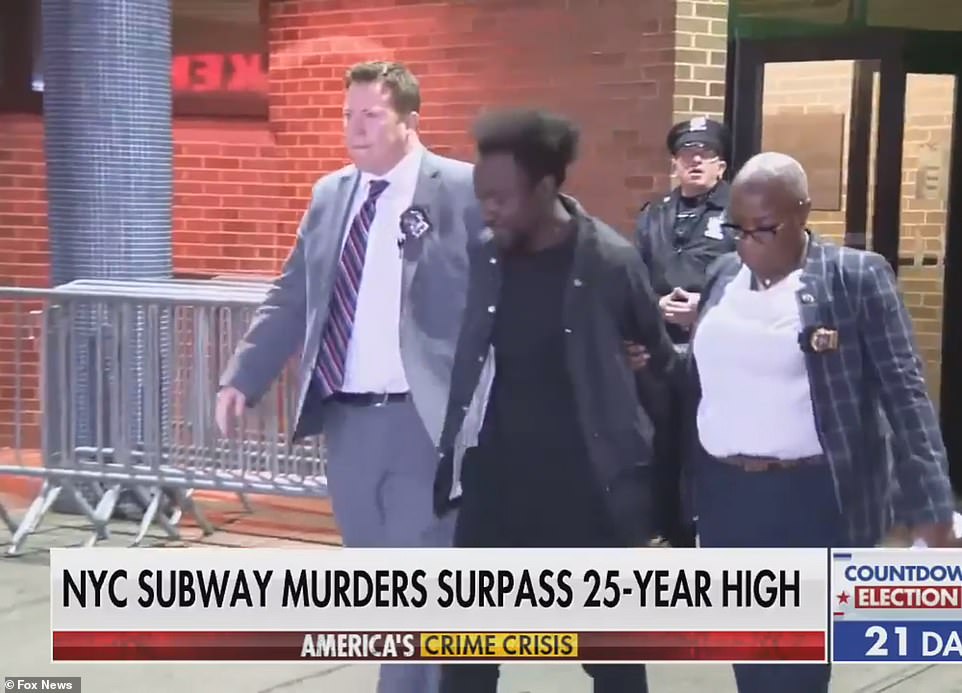 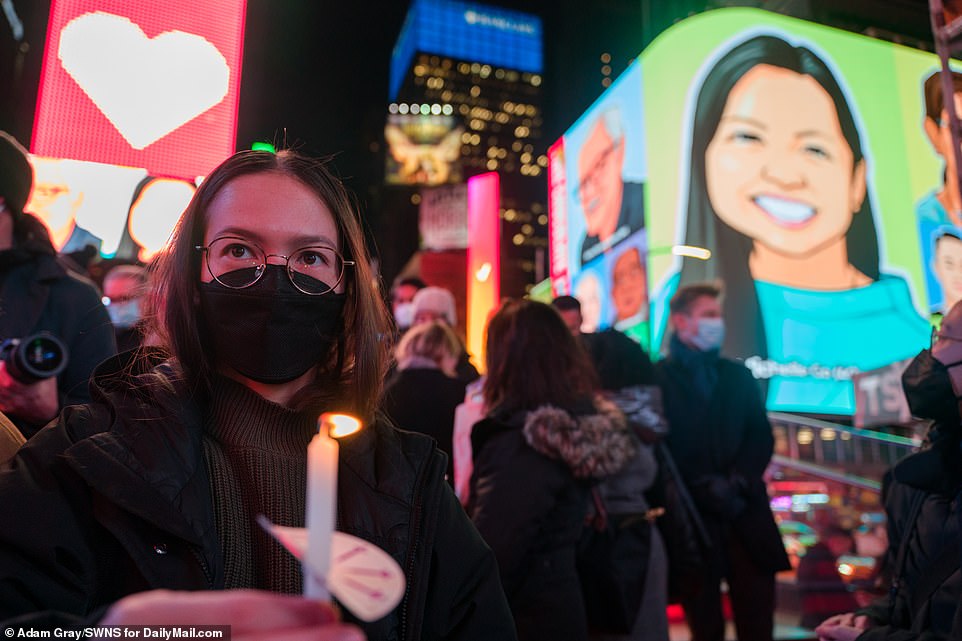 Earlier this year,  Marcus Bethea, 24, was shot and killed at the Jamaica Center subway station in April while working as a subway card swiper.

Daniel Enriquez, 48, was riding on the Q train that was heading over the Manhattan Bridge, when a gunman opened fire without warning on May 22.

The Goldman Sachs employee never took the subway, his partner Adam Pollack told DailyMail.com at the time. But an Uber to and from Williamsburg would have cost him $80. Andrew Abdullah, 25, was arrested in that attack.

Another subway brawl located at the 137 street – City College train station – on June 9 left a 14-year-old dead from a stab wound to his stomach. Police recovered a knife and broomstick thought to have been involved in the crime.

Michelle Alyssa Go, 49, was killed on January 15 when she was shoved onto the subway tracks on the southbound N/Q/R/W platform at West 42nd Street and Broadway at around 9.40am in an unprovoked attack.

Simon Martial, 61, was arrested and charged with Go’s death a day later. He was sent to a psychiatric facility after prosecutors declined to challenge a mental evaluation that found him unfit to stand trial.

And on New Year’s Day, Roland Huston was killed after jumping onto the tracks to rescue a man who’d been attacked by a group of knife-wielding thugs. Two boys, 16 and 17, were arrested for murder and gang assault weeks later. 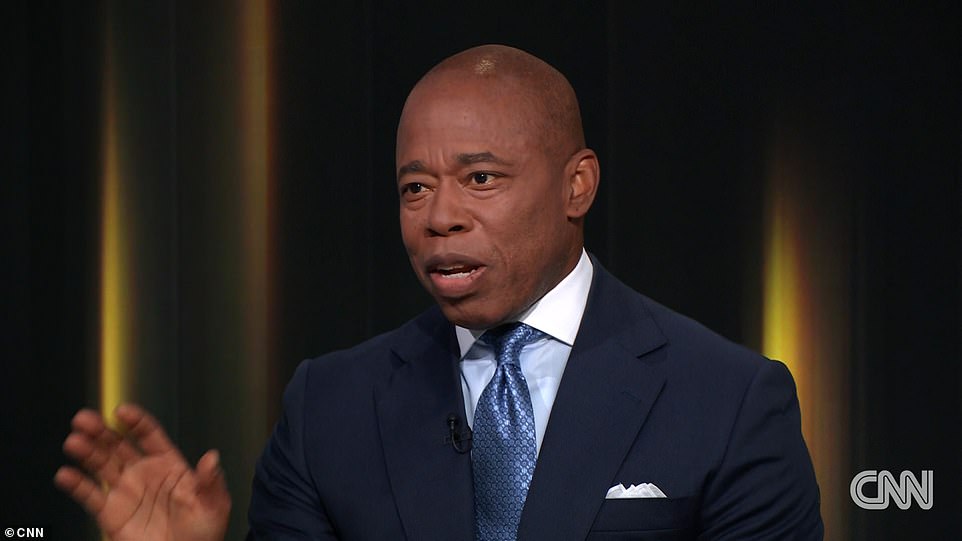 In an interview with CNN, Mayor Eric Adams denied that subway crimes are out of control 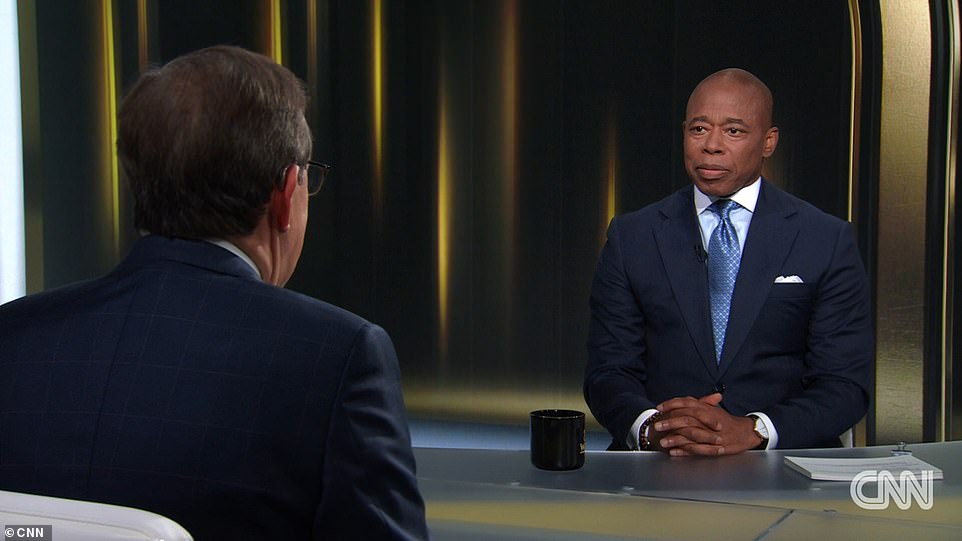 But Mayor Eric Adams continues to refuse that there is a problem with crime on the subway.

Speaking to CNN’s Chris Wallace on his new show Who’s Talking to Chris Wallace, Adams asserted: ‘We have an average of less than six crimes a day on a subway system with 3.5 million riders.

‘But if you write your story based on a narrative, then you’re going to look at those six crimes, and put it on the front pages of your paper every day.

‘So I have to deal with those six crimes a day — felony crimes — and the perception of fear.’

He has also previously suggested that residents would be safer on the subways if they do not wear earbuds after FOX 5 news anchor, Bianca Peters, told Adams: ‘I haven’t put my AirPods in for over a year, because I feel like I need to be very much aware.’

He replied: ‘Well first, I think that you were right about, you know, not having your iPods in – not focusing on the phone.

‘And I say yes to that. I do the same, and we put out a video and information telling people about being aware of what’s around them and what’s taking place. I encourage New Yorkers to do that.

Transit crimes are now up in America’s largest city 41 percent over last year as the number of homicides on the transit system reach record levels.

The common thread, Adams said in his interview with FOX 5, is the mental health crisis on the streets.

‘It’s the combination of ensuring that we deal with the actual violence, but also people must feel safe in the city of New York,’ Adams said.

‘Three point five million people use our subway system every day. We have an average of five felony crimes on the system per day.

‘But you’re seeing all of this disorder, people with mental health issues, people with the shooters you’re reading about.

‘You begin to not only feel unsafe but you’re seeing some of the violence. So that’s why we have to go about it both ways, that’s why we’re moving in both directions.

What does the FBI Mar-a-Lago raid mean for the 2024 election?