Former health secretary Matt Hancock and his girlfriend Gina Coladangelo appear to be working on some home improvement projects.

The couple was spotted at DIY store Homebase in north London on Sunday shopping for various items including a matt for their rubbish bin.

The pair, who fell in love after having an affair while both were married, carried their purchases out to the car before loading up the vehicle and driving away.

He resigned as Health Secretary after it was discovered he had breached Covid-19 social distancing rules with Ms Coladangelo and was replaced in the role by Sajid Javid.

Hancock later latter admitted he had ‘blown up every part of my life’ after he was caught on CCTV cheating on his wife with married aide and millionaire lobbyist Coladangelo against the door of his Whitehall office in June last year.

He lost his job when it emerged they were seeing each other despite her being his aide and them breaking social distancing rules that Mr Hancock had created. 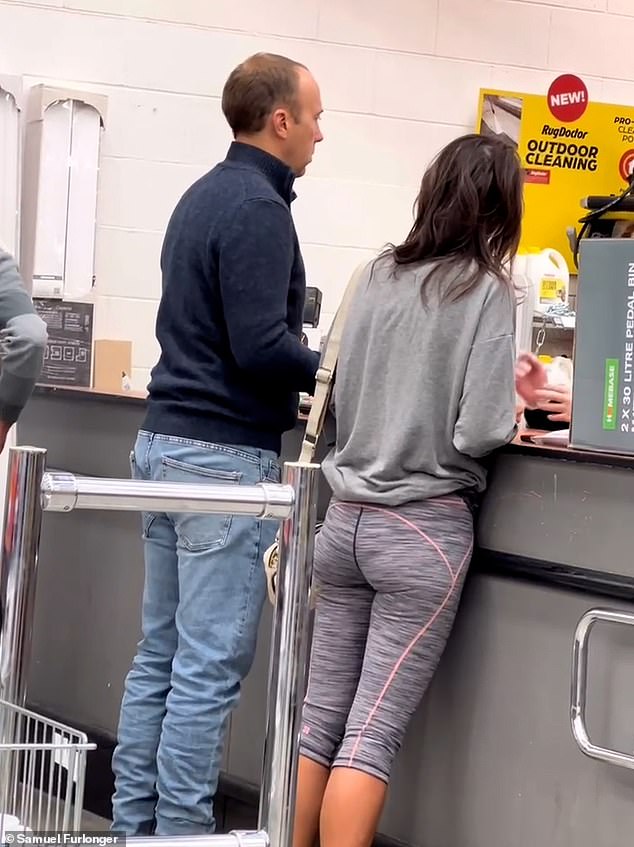 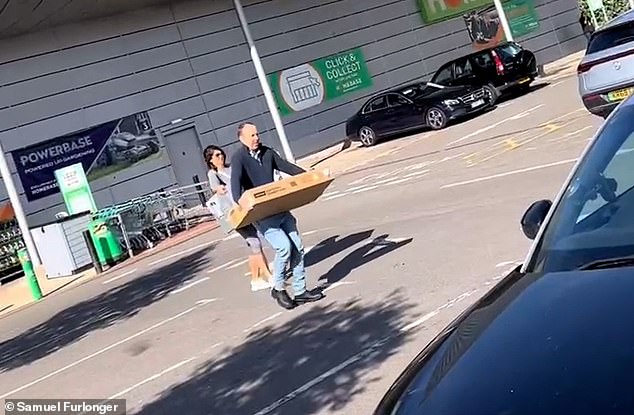 The couple was spotted at DIY store Homebase in north London on Sunday shopping for various items including a mat for their rubbish bin. Ms Coladangelo is seen carrying the matt and Mr Hancock carrying another box

The couple was spotted at the Finchley store around 10.30am on Sunday, both sporting casual attire.

Mr Hancock wore a blue jumper and jeans as he carried a large cardboard box. It is unclear what is in the box.

Ms Coladangelo wore a grey jumper and patterned leggings for their outing. She was seen taking the rubbish bin matt to the vehicle.

Their excursion is likely to spark rumours that the pair have finally shacked up.

Mr Hancock collected his belongings from his former marital home in London in July 2021. He had lived there with his wife Martha Hancock and their children.

At that time, the father-of-three and his former aide were building their relationship away from the public gaze, but not yet living together, the couple’s friends alleged.

But since then, the former health secretary and his lover have been spotted out in public together including back in May when they attended the Chelsea Flower Show with his mother and stepfather. 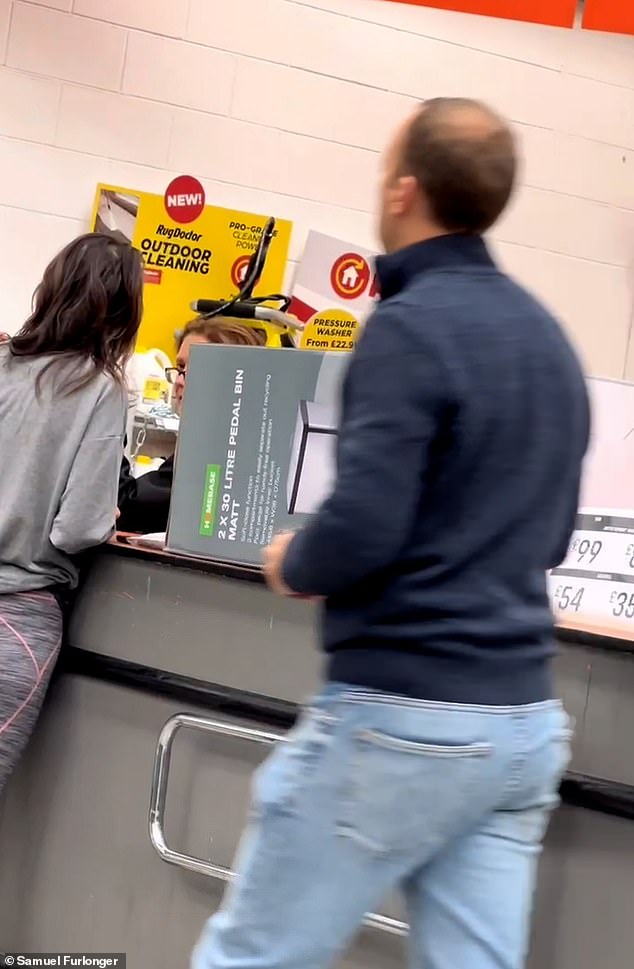 The couple was spotted at the Finchley store around 10.30am on Sunday, both sporting casual attire 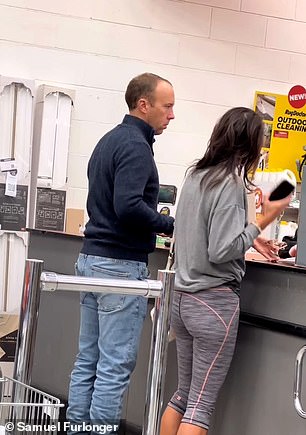 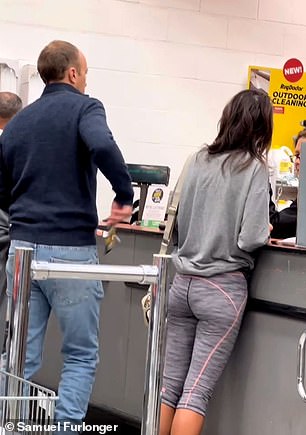 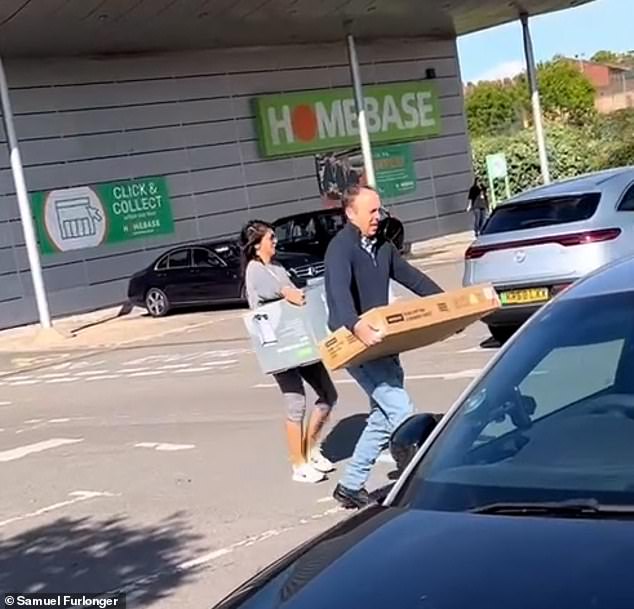 The couple’s excursion is likely to pose questions about whether they are living together. In July 2021 the pair’s friends alleged they were together but not yet cohabiting

Last week it was revealed that Mr Hancock has reportedly signed up for the next series of Celebrity SAS: Who Dares Wins.

He reportedly met with producers earlier this month to work out the details of his appearance on the gruelling reality show.

This will make Mr Hancock the first MP to take part in the Channel 4 series, which sees contestants compete in a two-week intensive training course designed to replicate the UK Special Forces selection course.

Mr Hancock is said to be hoping to ‘show a different’ side of himself after he resigned from his post when it emerged he had broken social distancing rules and cheated on his wife with Ms Coladangelo last year.

He will be put through his paces on the show by former soldier Jason Fox and former US marine Rudy Reyes.

The politician is passionate about fitness and was regularly seen going for early morning runs around the capital while in government.

He previously vowed to whip the nation into shape during the Covid-19 lockdowns in 2020, citing the UK’s obesity rates as a reason for high Covid deaths and hospitalisations.

The Tory MP was exposed for cheating on his wife Martha in June 2021 after he was caught kissing Ms Coladangelo in his private office, breaching the social distancing guidelines that he had established.

Mr Hancock tried to ride out the political storm over his flagrant breaches of Covid-19 regulations and his marital infidelity but was eventually forced to resign. 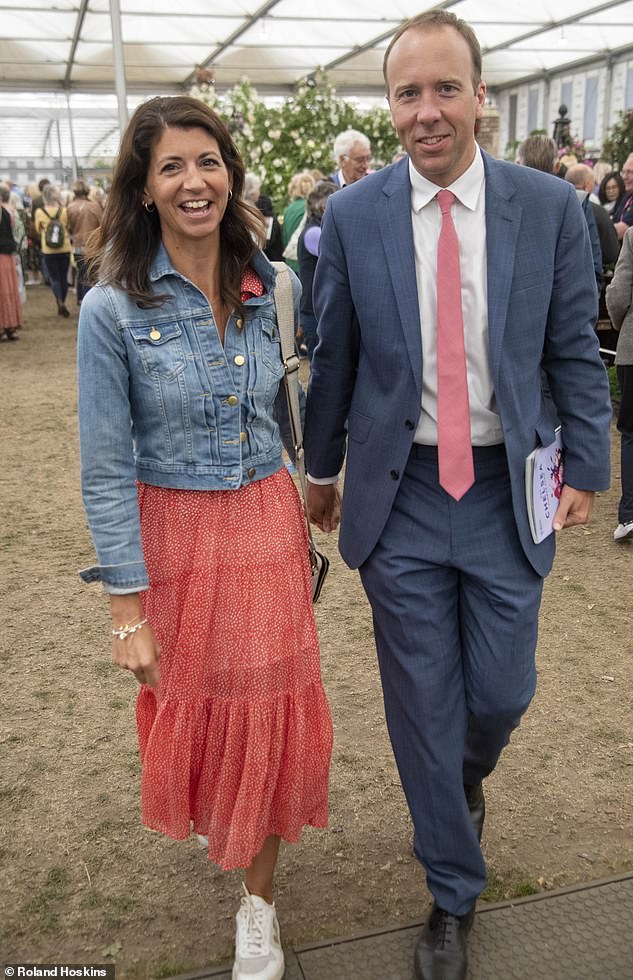 Mr Hancock and Ms Coladangelo have been spotted out in public together several times. In May the pair went to the Chelsea Flower Show (pictured) with his mother and stepfather 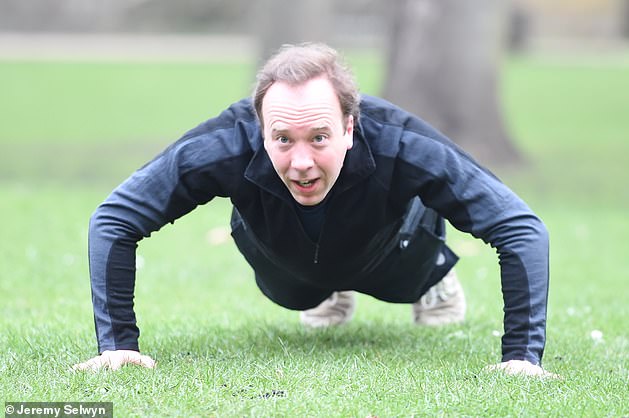 Challenge: The former heath secretary, 43, is said to have met with producers and signed up for the next series of Celebrity SAS: Who Dares Wins 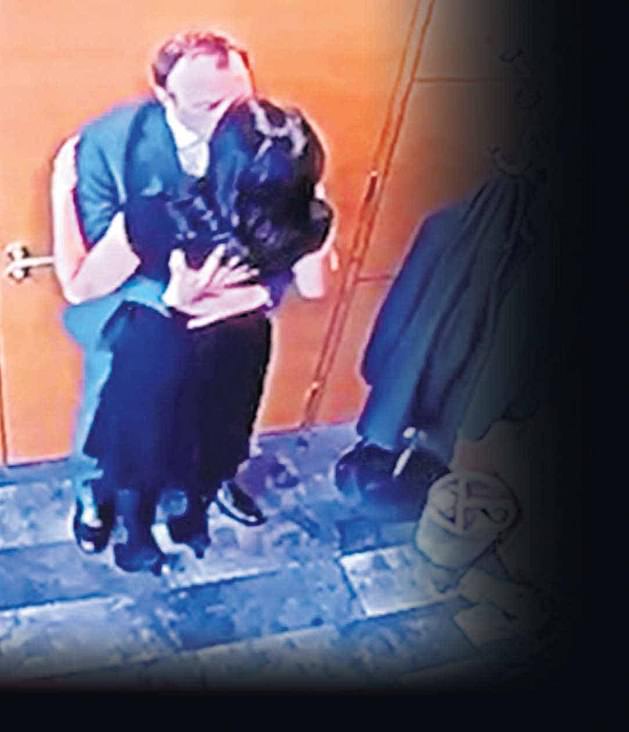 CCTV: Mr Hancock is said to be hoping to ‘show a different’ side of himself after he resigned from his post in disgrace after it emerged he had broken social distancing rules and cheated on his wife with a senior aide last year

In his first interview since quitting as health secretary and losing his wife over the affair, Mr Hancock apologised again to those he had hurt and admitted he had ‘let people down’.

Speaking to ITV political editor Robert Peston on his show, Mr Hancock said: ‘Well, as you can imagine, the first thing that I focused on was my personal life, and then I focused on my professional responsibilities, and I decided that I had to resign. 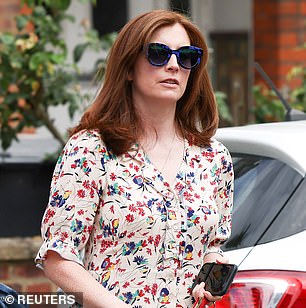 The Tory MP was exposed for cheating on his wife Martha Hancock in June 2021. She is pictured arriving to her London home shortly after their split

‘I had blown up every part of my life and I concentrated on my personal life first as you can probably imagine. It was the right thing to do.’

The Hancocks, who married in 2006, had lived with their daughter, 14, and two sons, 13 and eight, in London and West Suffolk, until last year when Mr Hancock’s affair was exposed.

After the footage emerged, Mr Hancock confirmed his resignation and said he wanted to ‘reiterate his apology for breaking the guidance’.

He said: ‘The last thing I would want is for my private life to distract attention from the single-minded focus that is leading us out of this crisis.

‘I want to reiterate my apology for breaking the guidance, and apologise to my family and loved ones for putting them through this. I also need (to) be with my children at this time.’

And a letter issued to the public read: ‘I am writing to resign as Secretary of State for Health and Social Care.

‘We have worked so hard as a country to fight the pandemic. The last thing I would want is for my private life to distract attention from the single-minded focus that is leading us out of this crisis.’