Mike Tindall was sporting his OBE medal today as he joined some 2,000 royals, world leaders and presidents to bid farewell to the Queen at her state funeral in central London.

The former England rugby star, 43, was invited to the service at Westminster Abbey as one of the ‘minor royals’, having married the late monarch’s granddaughter Zara Phillips, 41, in 2011.

Sitting in the front row, just a few yards from Her Majesty’s coffin, he cut a sombre figure in a black blazer and tie and grey pinstriped trousers as he supported his wife next to him.

The rugby legend, who helped England to World Cup victory against Australia in 2003, was sporting three military-style medals for the service.

From left to right, the first medal, shaped like a cross, is his Member of the British Empire (MBE), which he was awarded in 2007 for his contribution to rugby.

The central gong is the Diamond Jubilee Medal, which was created to mark 60 years of Queen Elizabeth II’s reign back in 2012.

It is made of silver and carries the Queen’s face, along with the year of the jubilee. 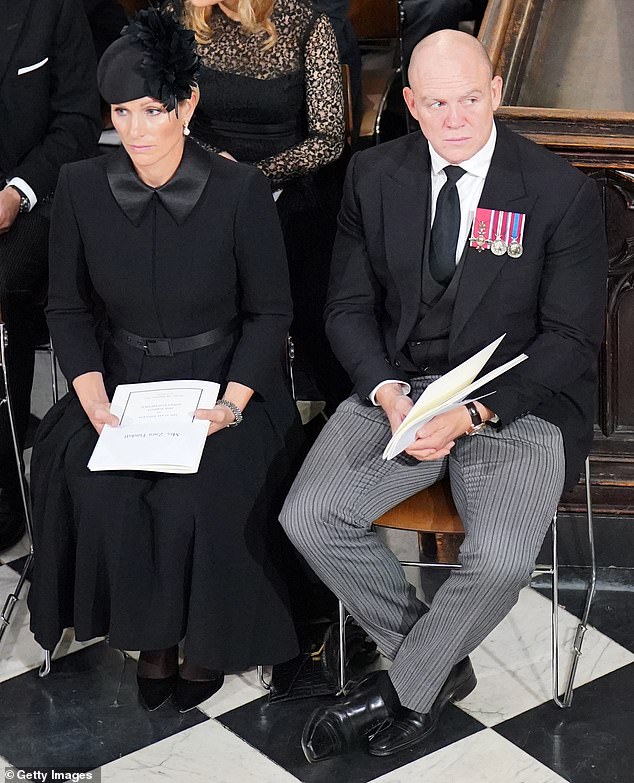 Mike Tindall, 43, was invited to the service at Westminster Abbey as one of the ‘minor royals’, having married the late monarch’s granddaughter Zara Phillips, 41, in 2011 (pictured together) 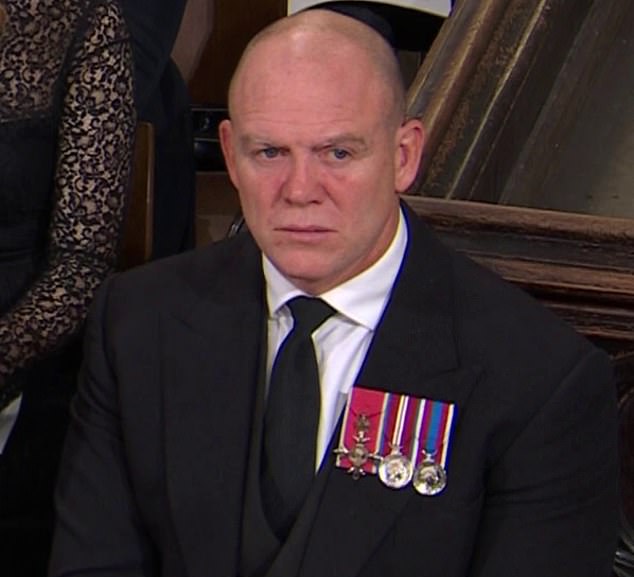 From left to right, the first medal, shaped like a cross, is Mike Tindall’s Member of the British Empire (MBE) award, which he was given in 2007 for his contribution to rugby. The central gong is the Diamond Jubilee Medal, which was created to mark 60 years of Queen Elizabeth II’s reign back in 2012. His third medal was awarded to mark this year’s Platinum Jubilee. Both jubilee medals were awarded to all members of the Royal Family. 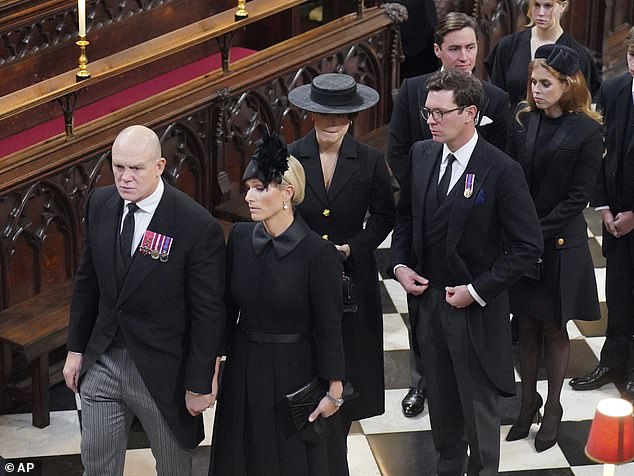 Cousins together: Zara and Mike lead the Queen’s grandchildren out of the Abbey today as the world mourns the Queen 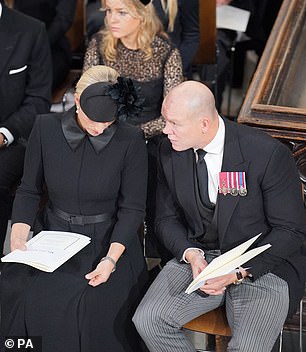 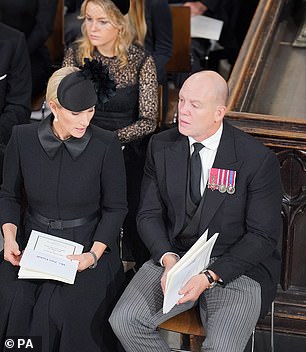 Mike, who met Zara nearly 20 years ago, has been a supportive member of the Firm and often pays tribute to the Queen

It was awarded to every member of the Royal Family, as well as members of the Armed Forces who had served for five years or more, emergency services workers, those who already held Victoria and George crosses and operational members of the prison service.

His third medal was awarded to mark this year’s Platinum Jubilee, which celebrated the Queen’s 70-year reign, making her the longest serving monarch in British history.

It was handed to the same groups of people as the previous Jubilee medal, with around 400,000 being created by the Worcestershire Medal Service.

Zara, the Queen’s first-born granddaughter, opted for all black as she arrived at Westminster Abbey.

The Olympian, who won a silver medal in team equestrian eventing at the London 2012 games, looked sombre as she sported a black fascinator and dress coat.

Zara and Mike appeared to be without their children Mia, eight, Lena, four, and Lucas, one.

Mia and Lena were at Westminster Hall on Friday for her lying-in-state. They were in the gallery with their parents Zara and Mike as their grandmother took her place alongside her three brothers for a silent vigil beside the Queen’s coffin.

The 15-minute ceremony went off without a hitch, with the cousins seamlessly taking their positions around the coffin and leaving in formation. 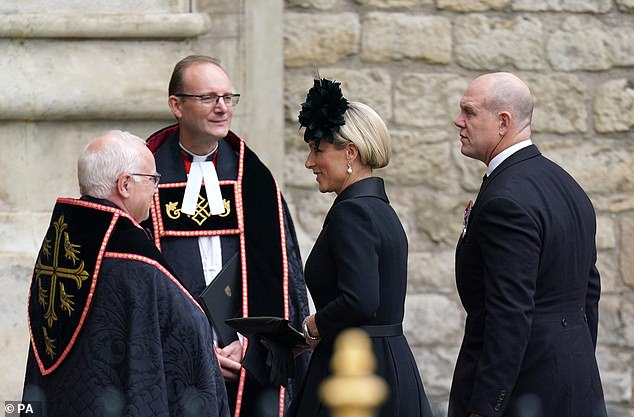 A picture of dignity, Zara greeted clergymen as she entered the Abbey this morning alongside her former Rugby pro husband

But on their way up the steps to leave Westminster Hall, Zara was seen briefly stopping and looking down at the ground.

Her brother Peter Phillips was by her side and paused briefly so that she could gather herself and continue.

Zara’s brother Peter joined the funeral procession, lead by his uncle King Charles III, alongside Earl Snowdon, the late Queen’s nephew. Their mother Princess Anne was joined by her husband Sir Timothy Laurence in the procession.

Zara has not spoken publicly since her grandmother’s death, but her husband Mike has shared many tributes to her on his public Instagram page.

The former England rugby pro,  shared his mother-in-law Princess Anne’s touching statement about the Queen’s death alongside a heart emoji.

The Princess Royal, the late monarch’s only daughter, told how she was ‘fortunate to share the last 24 hours of my dearest mother’s life’ in a statement posted on the Royal Family’s Instagram.

She said the love and respect shown to the Queen on her journey from Balmoral to Edinburgh and onto London had been ‘both humbling and uplifting’. 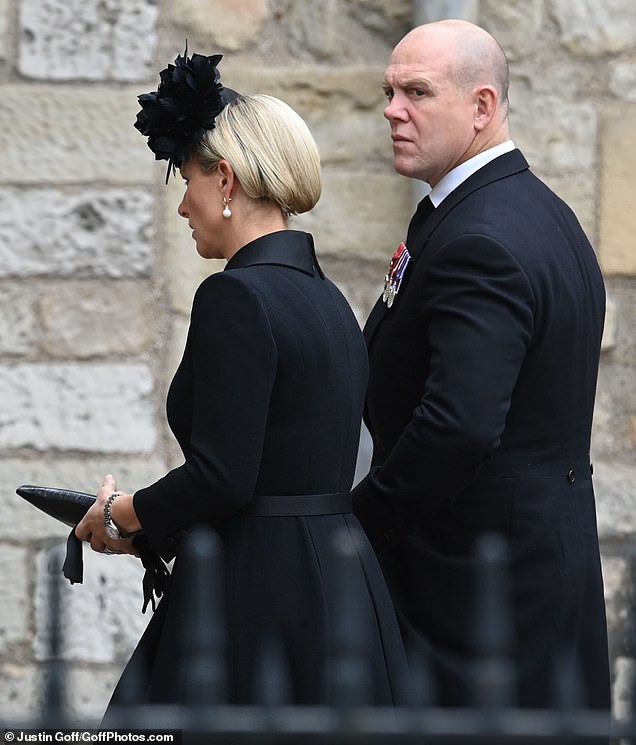 The Queen’s first-born granddaughter, 41, opted for all black as she arrived at Westminster Abbey sporting a fascinator 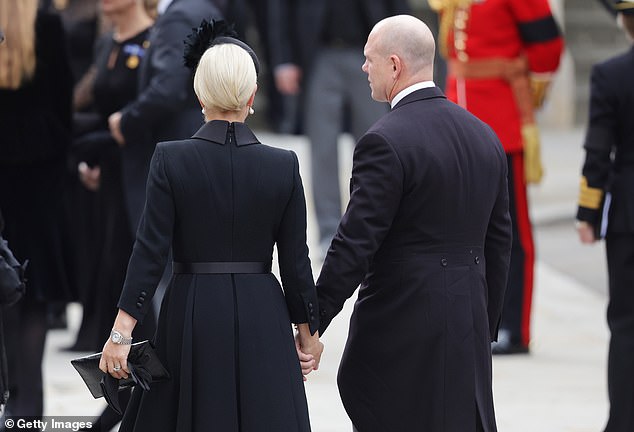 Hand in hand: Supportive husband Mike held onto Zara as the couple entered the Abbey this morning

It followed another tribute Mike posted, which showed an illustration of a corgi weeping into a crown. He also shared a picture of Sydney Opera House lit up with the Queen’s image. Touchingly, he met Zara in Sydney in 2003.

Mike has previously said he thought the monarch was ‘unbelievable’ and people believed she was ‘invincible.’

His post came after his wife Zara was seen joining her mother Anne to look at floral tributes in Balmoral following the Queen’s death at the estate on Thursday. It is not known if Mike joined the family at the estate.

Speaking in May, he said: ‘I think the Queen is an unbelievable lady…I think people think she’s invincible sometimes, but you have to remember she’s a 96-year-old at the end of the day.

‘She’s incredible at what she’s done over her lifetime and I can’t wait to celebrate that.’

The same month, he paid tribute to the monarch as she celebrated her 70th anniversary on the throne. 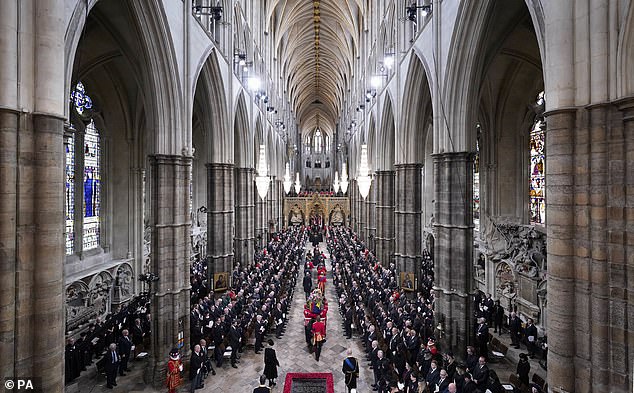 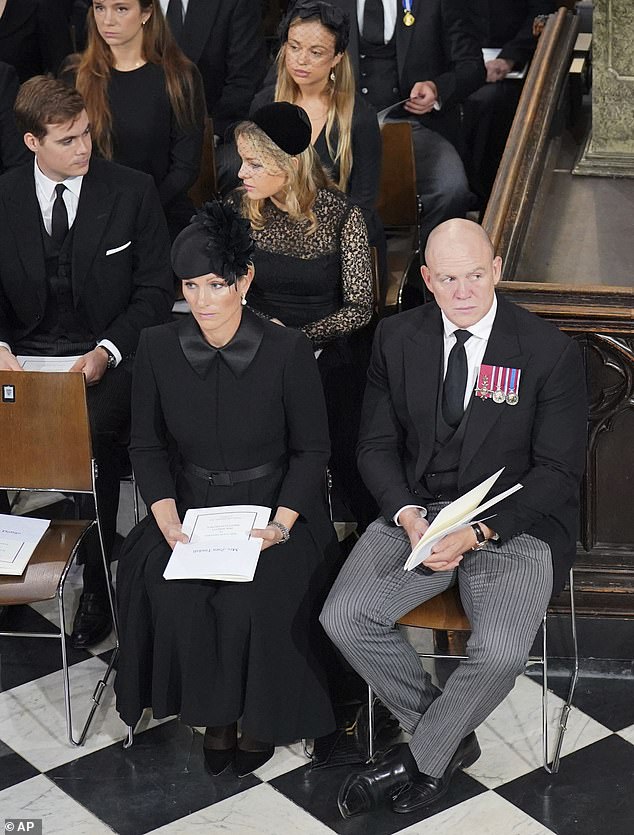 He posted a picture illustrating the Queen in each decade of her reign, from 1952 to 2022, with the caption: ‘What a lady’.

King Charles III and his grief-stricken family have surrounded the Queen’s coffin at her state funeral in Westminster Abbey in a moving and majestic farewell to the late monarch today in an extraordinary service followed by a national two minute’s silence and the Last Post.

Her Majesty made her final and saddest journey from Westminster Hall as Britain mourned its longest-serving monarch and the royals bade goodbye to a beloved mother, grandmother and great-grandmother.

Her coffin was placed close to the altar with her crown, orb and sceptre on its top surrounded by flowers chosen by the King from gardens she loved. The Archbishop of Canterbury then hailed the Queen’s ‘abundant life and loving service’ as he delivered the sermon at her state funeral, adding: ‘She was joyful, present to so many, touching a multitude of lives.’

'Computer genius' Carlos Acutis is to be beatified by the Vatican