Brits could be paying more to put milk in their tea than petrol in their car, as the price of a pint soars while fuel comes down

Hard-up Britons could soon be paying more to put milk in their tea than petrol in their car as the price of a pint soars while that of fuel comes down, new figures reveal.

The statistic is all the more surprising since petrol prices hit record highs in June, and experts say it illustrates the rapid inflation in dairy products.

Milk prices have soared by two thirds in the past year, pushing up the average price per pint to 86p – the equivalent of £1.50 a litre.

Smaller branches of the bigger retailers are selling single pints for as much as £1.05 which is a fraction under £1.85 a litre.

Petrol prices have started to fall from highs of 191p a litre and can now be as little as 149p at the pump in some areas. 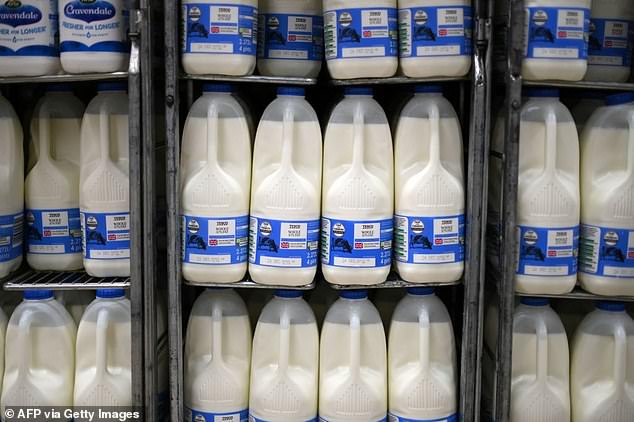 Milk prices have soared by two thirds in the past year, pushing up the average price per pint to 86p – the equivalent of £1.50 a litre

As supplies ‘stabilise’ after the shortages caused by the war in Ukraine, petrol prices are tipped to fall a further 15p to 20p. This would take the current average price of petrol at 166p below the average cost for the same amount of milk.

It won’t be the first time milk is dearer than petrol – but that was in the late 1980s when a glut of oil led to the price collapsing. At the time, most Brits also had milk delivered to the doorstep, meaning prices were relatively higher than now as they included delivery.

Higher energy costs have hit diary farmers across the board. Electricity is needed to milk cows, process and refrigerate milk and also produce containers costs more. Petrol is required to transport it in tankers. Even the manufacture of animal feed requires energy, according to The Grocer.

Some farmers quitting as margins have shrunk has led to fewer producers, also pushing up prices.

The Grocer said: ‘Dairy is at the sharp end of food and drink price increases, with milk leading the charge. The average price of semi-skimmed milk has seen a market change since July and at an average 86p has increased 65 per cent year on year.’

It is cheaper to buy milk in bigger quantities – for instance, a two pint container can be as little as £1.35.

But those living alone, the elderly and those who do not use a lot of milk are more likely to buy the smaller sizes to avoid wasting any that may go off.

Petrol prices will remain higher than normal for as long as the war in Ukraine affects supplies, but the AA said: ‘There is hope that prices will continue to fall by as much as 15p per litre as rising interest rates and the threat of global recession creates a decline in demand which should, in turn, enable the oil supply to stabilise.’

EU rules out Brexit renegotiation as May seeks help from Merkel

Domino’s Tried to Sell Pizza to Italians and Failed