A mother has shared striking images of the horrific, damp and mouldy flat she shares with her wife and three young children in Cornwall.

Jade Fargo says the conditions of the flat are so bad that the family-of-five are nearly always poorly, leaving her feeling like ‘a failure’.

The 32-year-old first moved into the Truro flat – owned by Cornwall Housing, a Cornwall Council company – three years ago.

Since then, damp and mould spores have plagued their daily lives and she claims the housing association is not interested in diagnosing and resolving the issues. 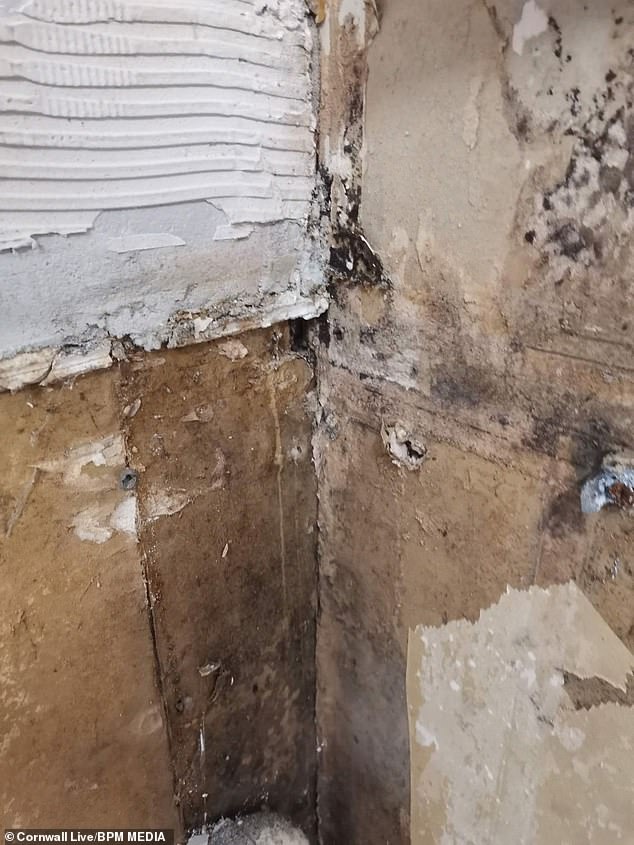 Jade Fargo has shared images of the horrific, damp and mouldy flat she shares with her wife and three young childre. The flat is owned by a Cornwall Council company 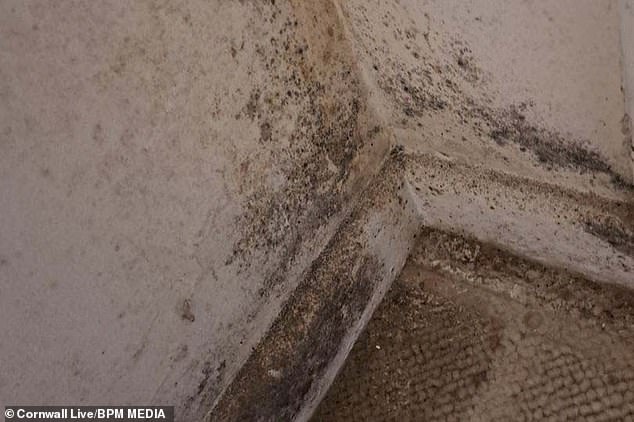 She and her partner are more concerned than ever after the death of two-year-old Awaab Ishak in Rotherham.

Horrifying images from inside the home of the toddler laid bare the damp and mouldy conditions that caused the toddler’s death in Manchester.

His parents, Faisal Abdullah and Aisha Amin, issued a heartbreaking statement saying they ‘shouted as loudly as we could, but nothing changed.’

Now Jade has shared similar images of the home she shares with her wife and three daughters, aged two, three and six.

‘Our flat is full of mould to the point that we even have mould growing out of the plug sockets,’ explained Jade.

‘Every time I phone [Cornwall Housing] I get fobbed of. I had someone come out from Mouldex (a private company that deals with mould and condensation control) this week who told us the flat is completely unsafe, took a plug off and it was black and damp with mould.

‘We’ve already had one electrical fire this year because of it.

‘The council aren’t doing anything to help us. They just keep referring us on to other departments that take another three working days or ten working days to contact us.

‘I’ve got three kids aged two, three and six and a two-year-old boy in Rotherham has died because of the same problems we’re having at the minute.

‘We honestly can’t live like this anymore. I’ve had to stop working completely because my asthma has got so bad.

‘I’ve been eight months on the strongest inhalers I can have and steroid tablets every other month.

‘My kids are constantly poorly with chesty coughs, especially the younger two.’ 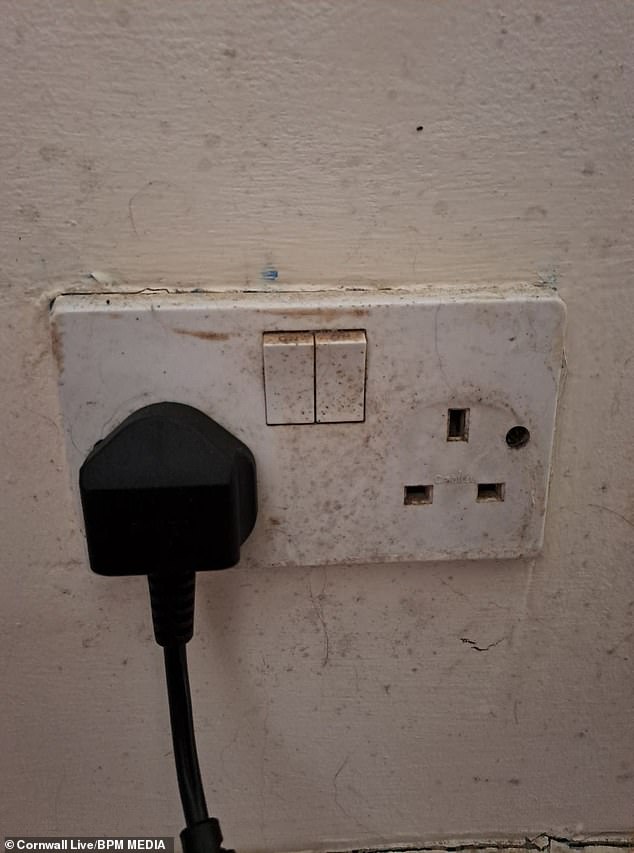 Mrs Fargo said that mould is growing out of the plug sockets, making her children unwell and leading her to feel like ‘a failure’

Mould is an allergen and, if allowed to spread, can become highly toxic and cause severe respiratory infections. Spores can grow on plaster, wood, carpet and even dust.

The problem is worse in tenanted homes, rather than privately owned ones, as these tend to be cheaply built with thin walls and are prone to condensation.

Much rental stock is old and not built to current housing regulations, and properties tend to be less well looked after by landlords than owner-occupied homes.

Around 40 per cent of rental homes are susceptible to mould, according to homeless charity Shelter.

Their data shows that approximately 4.7 million private renters have battled mould issues at their homes in the past year.

The social housing ombudsman has received 3,350 complaints about damp, mould and leaks in 2022 – almost double the number reported in 2020.

She went on to explain how they have had to replace the carpets with linoleum this year saying the mould had destroyed the flooring.

‘The mould had literally eaten the carpets. I had to replace our children’s bunk bed because the mould had ruined their first one,’ she said.

They also had a new kitchen fitted last year and when the previous one was demolished it revealed the kitchen and bathroom wall was completely infested with mould.

‘But that was just built over again,’ she added.

‘It makes you feel awful. We do everything that we can and I get up an hour before the kids in the morning to clean the mould that has grown overnight.

‘I unfortunately can’t work due to various health conditions, but I used to work full time and since I’ve not been unable to work its unfortunately how we’ve ended up in social housing.

‘It makes me feel like a failure because we can’t afford to privately rent, but if we could, we might be able to get somewhere that wasn’t mouldy. But that’s not just an option for us.’

She continued: ‘The thing that really frustrates me is that on the estate we live on over the summer houses were available on the estate and I was begging the council to move into one of these properties, but they said they couldn’t move us because we had to bid like everybody else. The closest we’ve ever got is 49th in line. It’s just not going to happen.

‘I’m focusing on what I can do to get my family and my children into a safe home. We’re not asking for a four-bedroom penthouse overlooking the sea. All we want is somewhere safe for our kids. It’s really scary.’ 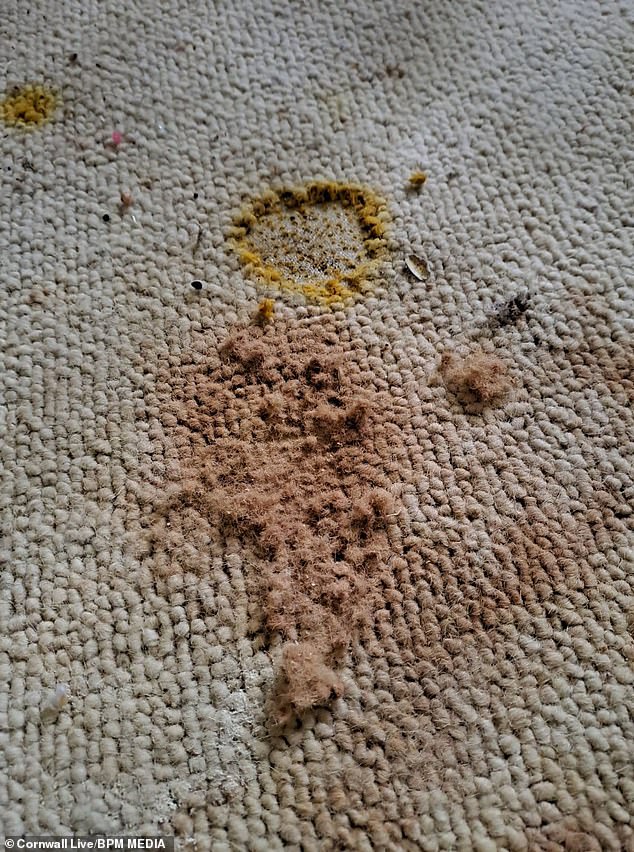 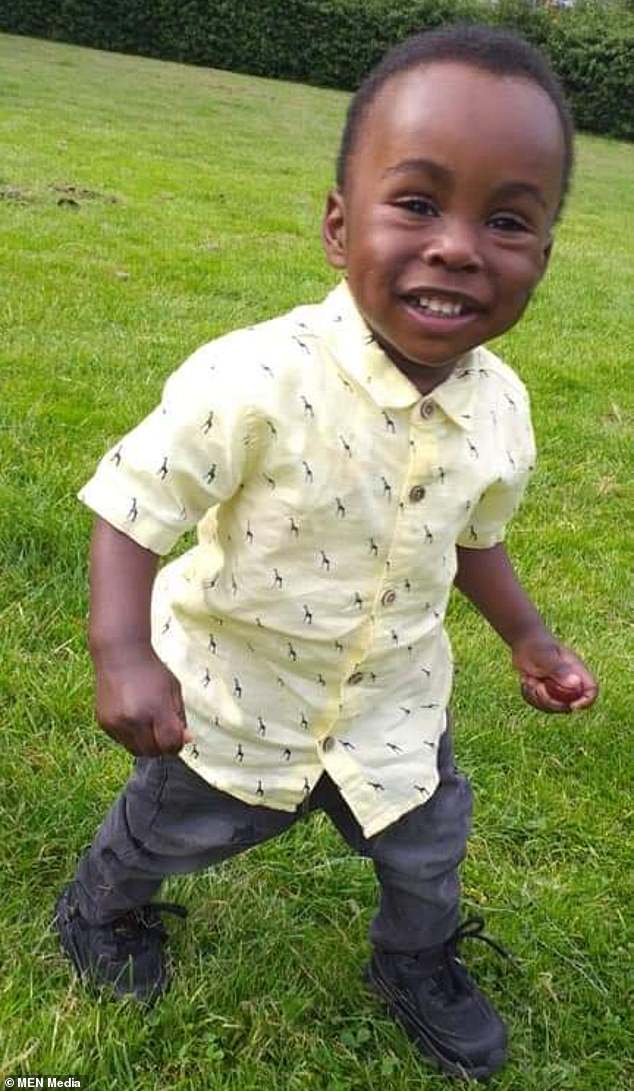 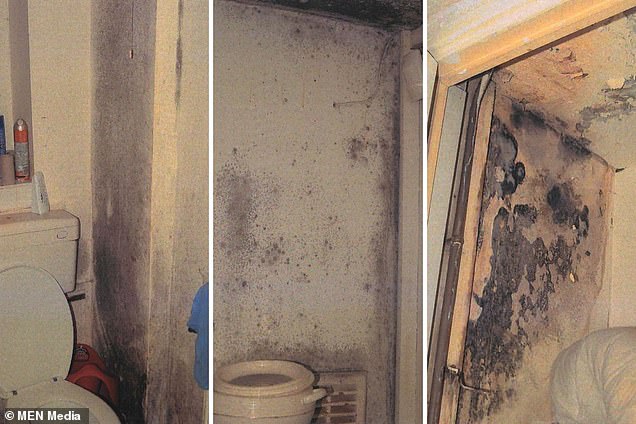 Senior coroner Joanne Kearsley said the death of Awaab suffered prolonged exposure to mould and this should be a ‘defining moment’ for the housing sector. Pictured: The mould in Awaab’s family home

A Cornwall Housing spokesperson said: ‘We, like everyone else, have been shocked to learn the circumstances surrounding the tragic death of Awaab Ishak and our hearts go out to his family.

‘We take seriously our responsibilities as the landlord of more than 10,000 social homes across Cornwall. The health and safety of our tenants is our priority and as soon as we are made aware of an issue with damp and mould we will work with tenants to identify the cause and how to resolve the issue. We cannot comment on specific cases, but are working with the tenant to address the concerns identified.

‘Our longer term aims include reviewing our housing stock to pick up on any early signs of damp – using new technology in homes to monitor the level of water in the atmosphere and condensation levels. Any Cornwall Housing tenants concerned about mould and damp in their homes can contact the team on 0300 1234 161.’

‘We shouted as loudly as we could, but nothing changed. We were trapped’: Heartbreaking statement from parents who watched their little boy die

Awaab Ishak’s father, Faisal Abdullah issued a statement following the verdict on his son’s death, saying: ‘The past two years have been gruelling.

‘When Awaab died, our lives changed forever. Today, two years on, the coroner has found that our little boy’s prolonged exposure to mould led entirely to his death.

‘We still cannot get our head around the fact that despite all of the complaints we made to RBH, in addition to the information RBH received from an NHS member of staff expressing their concern for Awaab due to mould at the property, RBH did absolutely nothing to rectify the severe mould in our property.

‘We cannot tell you how many health professionals we’ve cried in front and RBH staff we have pleaded to expressing concern for the conditions ourselves and Awaab have been living in. We shouted out as loudly as we could, but despite making all of those efforts, every night we would be coming back to the same problem. Nothing was changing.

‘We felt like we weren’t getting anywhere, and we weren’t. Often our calls weren’t even answered. We don’t feel RBH actually cared about us.

‘Awaab’s coughing fits would sometimes last two to three days. There were days we wouldn’t be able to take Awaab out of the house because of how bad his coughing was – but of course by him staying in the house, this made his coughing worse. We were absolutely trapped.

‘Living in these conditions affected every aspect of our lives. We didn’t feel at peace with ourselves when in the property. All the time we felt troubled.

‘We were anxious and fearful of what the mould was doing to Awaab. Whenever friends would come to visit, they would tell us that the conditions RBH were keeping us in ‘were not right’.

‘We have no doubt at all that we were treated this way because we are not from the country and less aware of how the systems in the UK work. RBH we have a message for you – stop discriminating, stop being racist, stop providing unfair treatment to people coming from abroad who are refugees or asylum seekers, stop housing people in homes you know are unfit for human habitation. We were left feeling absolutely worthless at the hands of RBH.

‘If RBH ever come across similar issues again – we hope they deal with it in a more humane, efficient, professional way than how they behaved with us.

‘We want to end by telling you who our beautiful Awaab was. He was always full of smiles, he liked to joke and was full of life and laughter. He used to enjoy playing on his bike and with his ball. He always wanted to be with us. His absence leaves a huge void.

‘We would like to say a huge thank you for all the advice and support Farleys Solicitors and Christian Weaver of Garden Court North Chambers have given us throughout this difficult process. We would also like to thank HM Senior Coroner for carrying out such a thorough investigation into our son’s death.

‘Our lawyers very kindly worked on our case with no guarantee of payment. The legal aid agency only confirmed that the lawyers would be paid two days before the case started, despite preparations for the case having been ongoing for months and months. It should never be the case that families in our situation have to go through the inquest process without legal representation – singlehandedly up against multiple lawyers from the very bodies we feel bear responsibility for our child’s death.

‘Were it not for our legal team being so committed to representing us, even without payment, that could very well have been our reality. We fear that the admissions made by RBH in this inquest – such as their acceptance that they did receive the letter sent by the NHS health visitor warning of Awaab’s ill heath, along with the fact that they do accept they should have taken responsibility for the mould in our home may otherwise never have come out.

‘The family would now like to be left to process the findings of this inquest in private for the remainder of today.’