Great British take off: Mystery over 400-year-old gold ring unearthed in Paul Hollywood’s former £1.4m home… after it was removed from the finger of young man and lost for four centuries

A 400-year-old gold ring worth up to £30,000 has been discovered by a metal detectorist in the grounds of Paul Hollywood’s £1.4 million former home.

Mark Presland, 60, found the treasure at what is now the residence of the TV baker’s ex-wife Alex.

The griffin ring has now officially been declared as treasure by a Coroner.

It is a D-shaped golden ring emblazoned with a griffin, the legendary creature with the head and wings of an eagle and the body of a lion.

It met strict standards to be legally classed as treasure because it has more than 10 per cent precious metal content and is more than 300 years old.

Mr Presland found the coin when he was exploring the grounds of the property in Adisham, near Canterbury, Kent, with Mrs Hollywood’s permission in March this year. 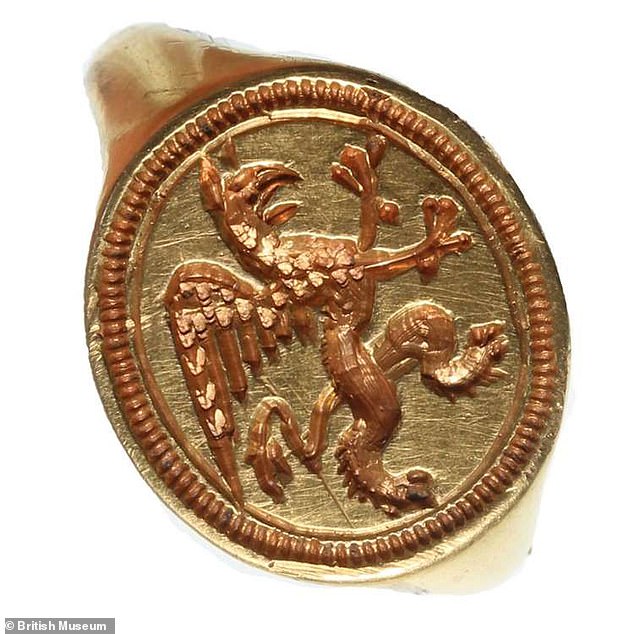 The griffin ring (picitured) has now officially been declared as treasure by a Coroner. It is a D-shaped golden ring emblazoned with a griffin, the legendary creature with the head and wings of an eagle and the body of a lion 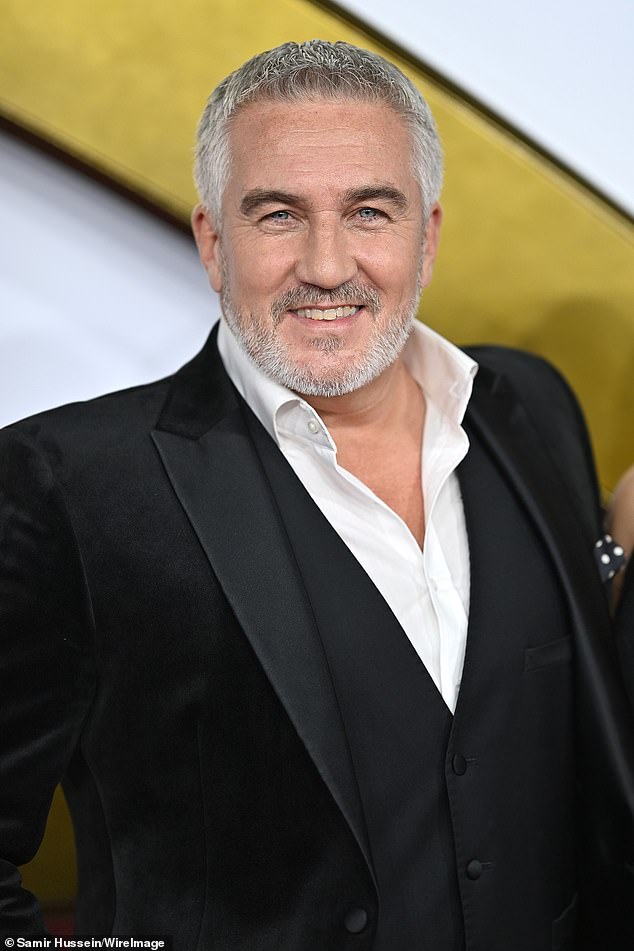 A 400-year-old gold ring worth up to £30,000 has been discovered by a metal detectorist in the grounds of Paul Hollywood’s (pictured) £1.4 million former home 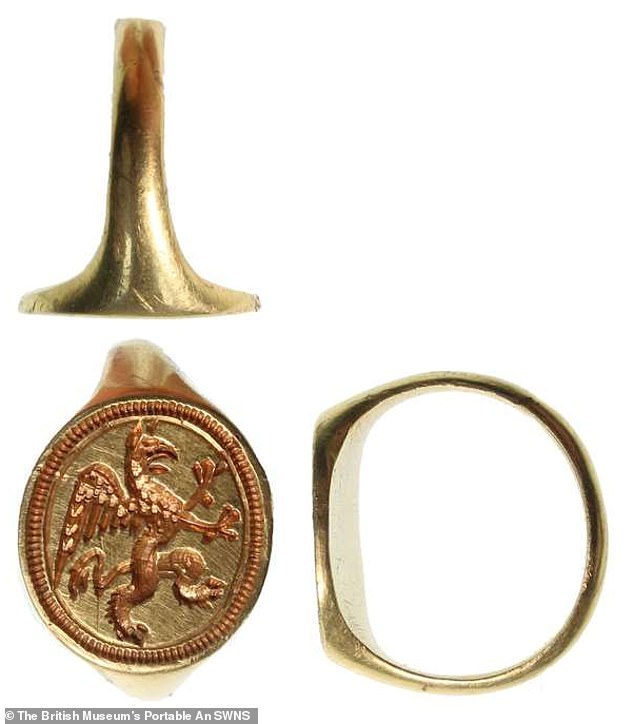 Although the exact history of the ring (pictured) remains a mystery, Mr Presland, who is from Adisham, said he believed the ring was given to a ‘young man on his coming of age as a present’

Once he had brushed the earth away, the keen detectorist saw the treasure he had discovered in its full glory for the first time.

Mr Presland, who is from Adisham, said: ‘The gold signet ring has a griffin motif on it which I believe represents strength, so it may well have been given to a young man on his coming of age as a present.

‘It obviously wouldn’t have been a cheap item to purchase in those days.

‘It’s a very beautiful item and remarkably in very good condition despite the fact that it’s been within the plough soil for nigh-on 450 years. It’s remarkable.’

Although the history of the relic cannot be known for certain, Mr Presland believes the circumstances of the find make it more likely it was lost rather than hidden or taken by force.

He said: ‘It’s more than likely that it was a random loss, and slipped off somebody’s finger 450 years ago when they were out, doing whatever they were doing outside.

‘To think if it was a ring like this, you’d be very upset about the loss.’ 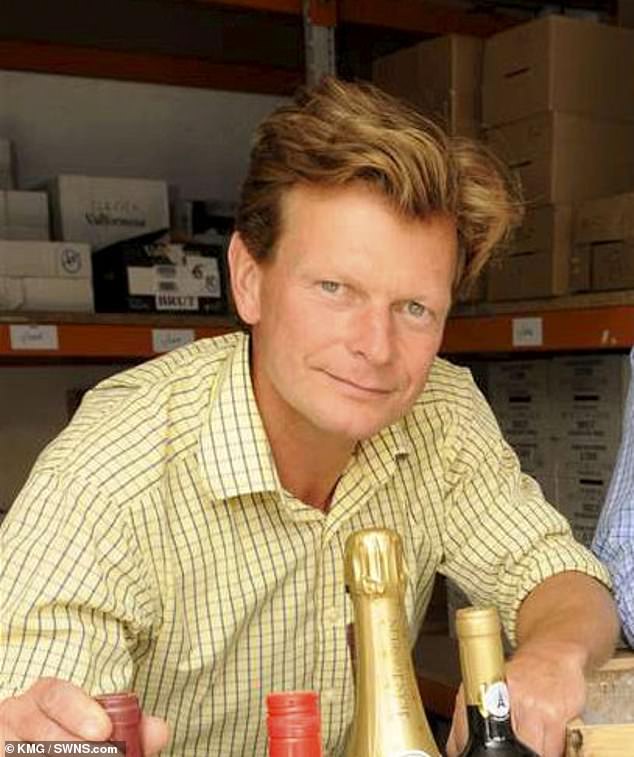 Mark Presland, 60, (pictured) found the coin when he was exploring the grounds of the property in Adisham, near Canterbury, Kent, with Alex Hollywood’s permission

As an experienced metal detectorist, Mr Presland knew finds with the potential to be treasure must be declared to an archaeologist and become property of the crown.

Then begins a long process, which ultimately determines where the artefact will end up and whether the finder will be given a reward.

An inquest examines the evidence of an expert archaeologist’s report and determines whether the found item meets the criteria and can be legally called treasure.

if a historical object is being eyed for purchase by an institution or museum, there will be an official valuation by the British Museum.

Mr Presland, who runs Manor Wines in the village, says a local museum is looking to buy the griffin ring, but he is keeping which one under wraps for now.

If the museum goes ahead with the purchase, the money paid will be split 50/50 between the finder and the landowner, Alex Hollywood, as a reward.

The result of the official evaluation has not yet been released but gold signet rings from the same period are available to purchase from auctioneers for between £10,000 and £30,000. 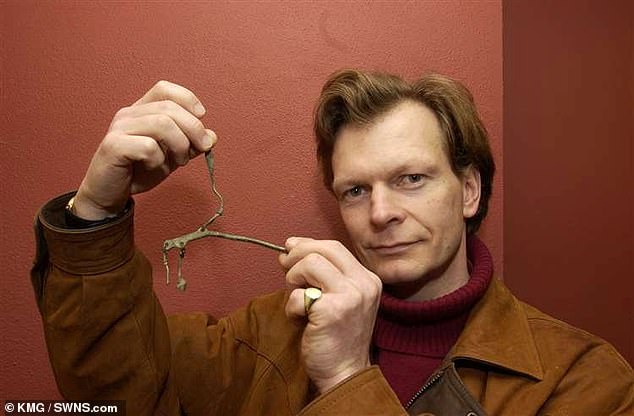 Once he had brushed the earth away, the keen detectorist Mark Presland (pictured) described the moment he saw the treasure in its full glory for the first time

However, Mr Presland is adamant he is not into metal detecting for the money.

He said: ‘It’s not really the reason I detect, I detect because I enjoy the hobby of being out and discovering the hidden past.’

The amateur historian says he feels he is saving these artefacts from being destroyed and for him, seeing them displayed in a museum is the ‘greatest delight’ of the pastime.

He added: ‘I’m hoping for it to be on public display, that is what would be great.

‘It’s always nice to have some recognition but ultimately if it stays in the local area and people can come and look at it and enjoy seeing it.

‘If you can uncover the past you are saving those items from the plough because I’m afraid that every time the plough turns the soil it brings things up to the surface but at the same time it pulverises things.

‘I feel that I’m trying to rescue things, you’re racing against time to get things out of the ground before they are liquidised or smashed into little pieces which is ultimately what will happen to them if they are in the plough soil.

‘This luckily escaped and it is in the condition that it probably was when it was dropped.’

Mr Presland encourages anyone with an interest to get out detecting, but warns they must obtain permission from landowners – an increasingly difficult prospect as more people take up the hobby.

Reflecting on his hobby, which he has been enjoying since he was a child, he said: ‘There’s been that BBC sitcom series Detectorists and these sort of things have come along and opened people’s eyes to the idea of the hobby.

‘It’s great because it’s an interesting hobby and its open to anybody who has an interest in the past.

‘You can do it in your own back garden if you want to.

‘Provided you’ve got permission you can go and enjoy detecting in the outdoors and get out away from the television and all the attractions inside the house.’

In the 1990s, he found a hoard of silver pennies worth £2,500 which were then displayed at Dover Museum.

He added: ‘It just opens the imagination into what has gone before.

‘When you find coins from Roman or even pre-Roman days you think ‘I’m the first person to have touched this for 2,000 years’ so that’s quite a privilege.’

Alex Hollywood declined to comment on the piece of history that was discovered on her land.

From UberEats To Serving Looks: This Former Courier Shared How Her Side Hustle Helped Land A Sports Illustrated Modeling Job