From a sketchpad far, far away! Never-before-seen Star Wars concept drawings featuring a FEMALE Luke Skywalker and early version of Darth Vader from 1977 movie are set to fetch £8,000 at auction

In a galaxy far, far away Star Wars hero Luke Skywalker was originally a woman and his mentor Obi-Wan Kenobi never died during his climactic battle with Darth Vader.

Never-before-seen Star Wars concept drawings – kept by an advertising supervisor – have been unearthed telling a very different story than what appeared on screen.

The sketches give a tantalising glimpse of what might have been for the sci-fi saga and show director and writer George Lucas’s progressive ideas back in 1975.

It was released in 1977 after the legendary filmmaker grappled with the idea of making the movie’s protagonist a woman. 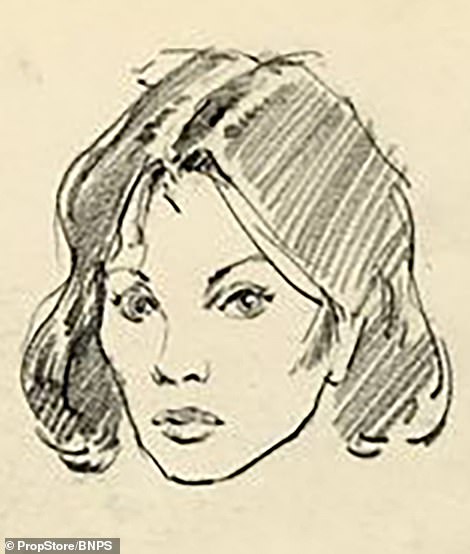 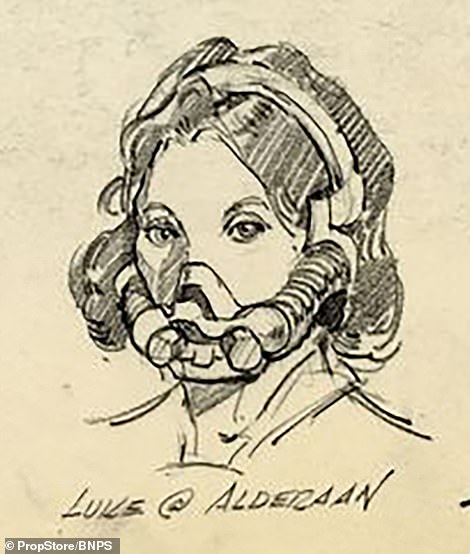 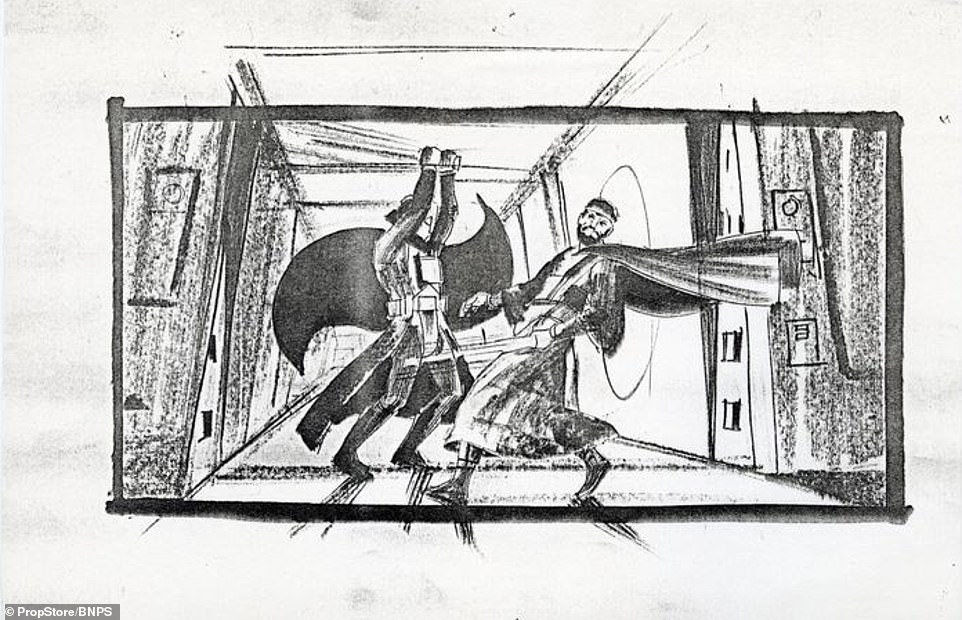 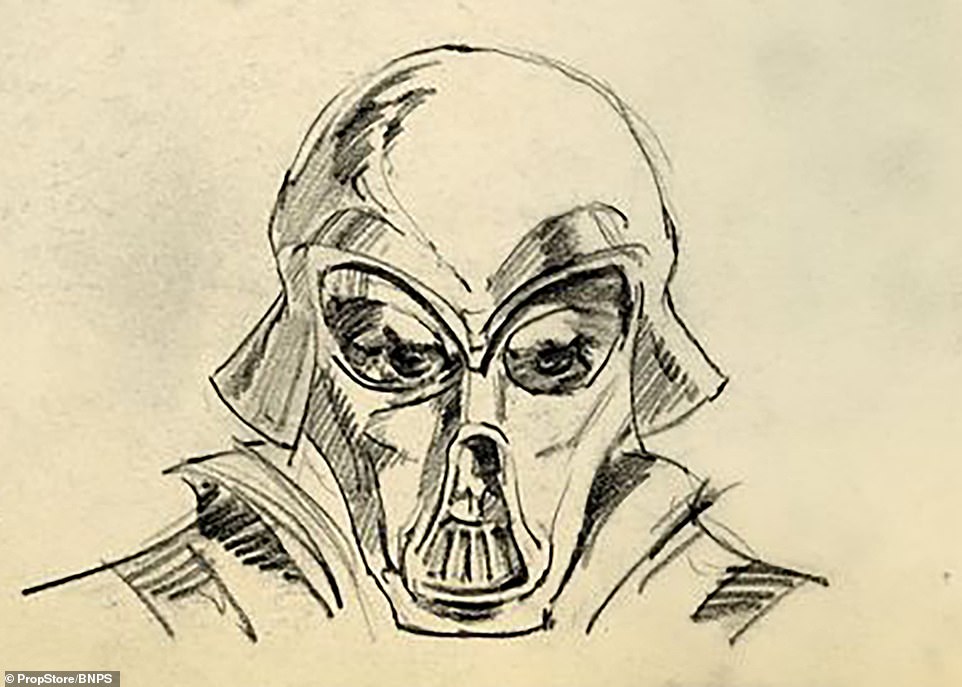 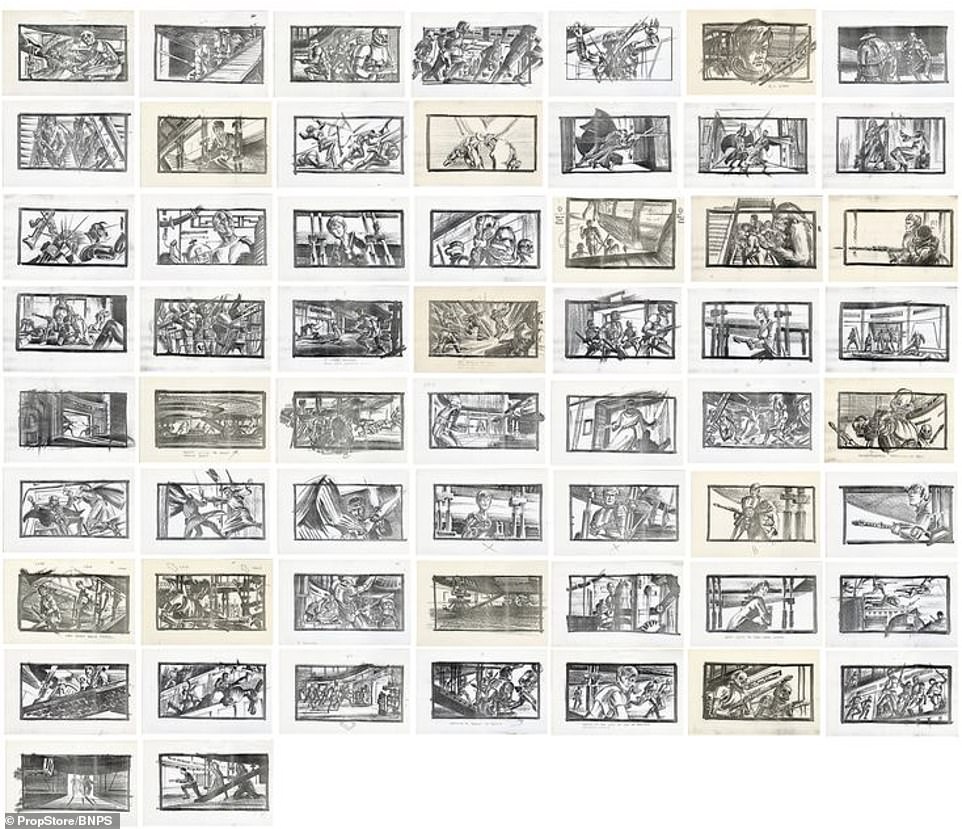 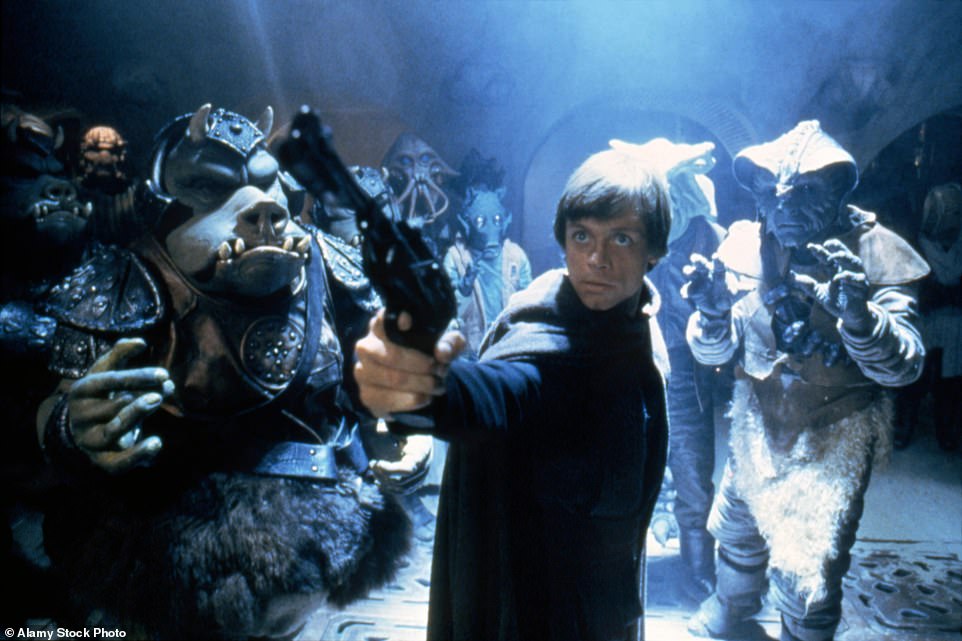 Luke Skywalker, played by Mark Hamill, as the hero character ended up appearing in the original trilogy of sci-fi films

The graphite sketch, produced by illustrator Alex Tavoularis, was made alongside an early version of Darth Vader’s mask, depicted as a hauntingly skeletal figure with human-like eyes.

It offers a rare glimpse into the creative process behind the famous franchise. It is tipped to sell for £8,000.

Being sold alongside it at auction is a storyboard consisting of 58, 8ins by 13ins sketches showing the classic lightsabre duel between Darth Vader and Obi-Wan Kenobi as it has never been seen before.

And unlike the 1977 film, where Alec Guinness’ character is killed by Vader and disappears on the spot, a mortally wounded Kenobi is rescued by Luke.

They make a desperate dash towards the Millennium Falcon under fire by Stormtroopers before narrowly escaping the Death Star.

The Obi-Wan in the drawings is a far-cry from Guinness’ elderly, white haired depiction. Instead, he is much younger and sports a bandanna as well as the characteristic Jedi robe. 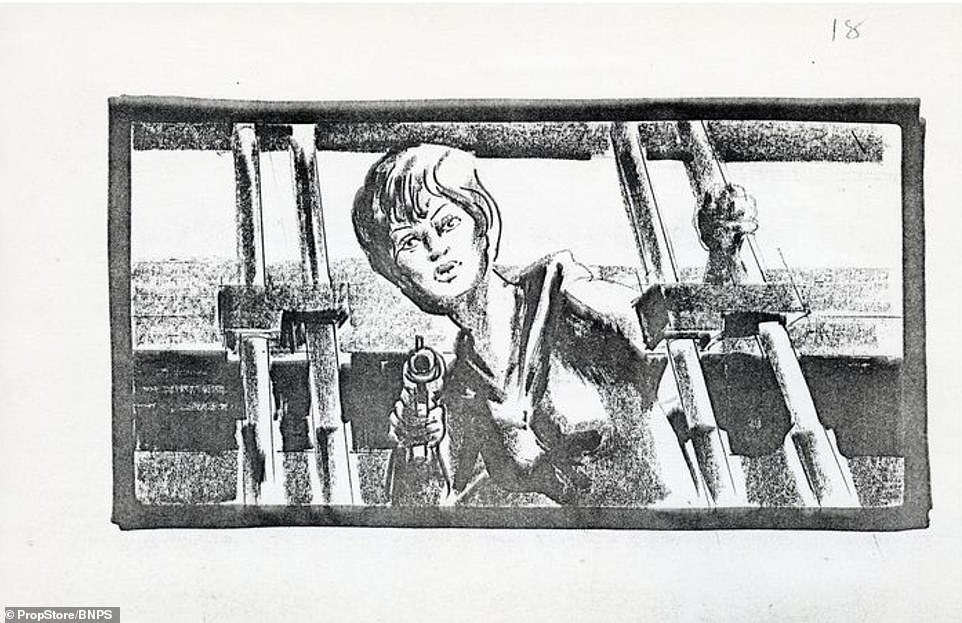 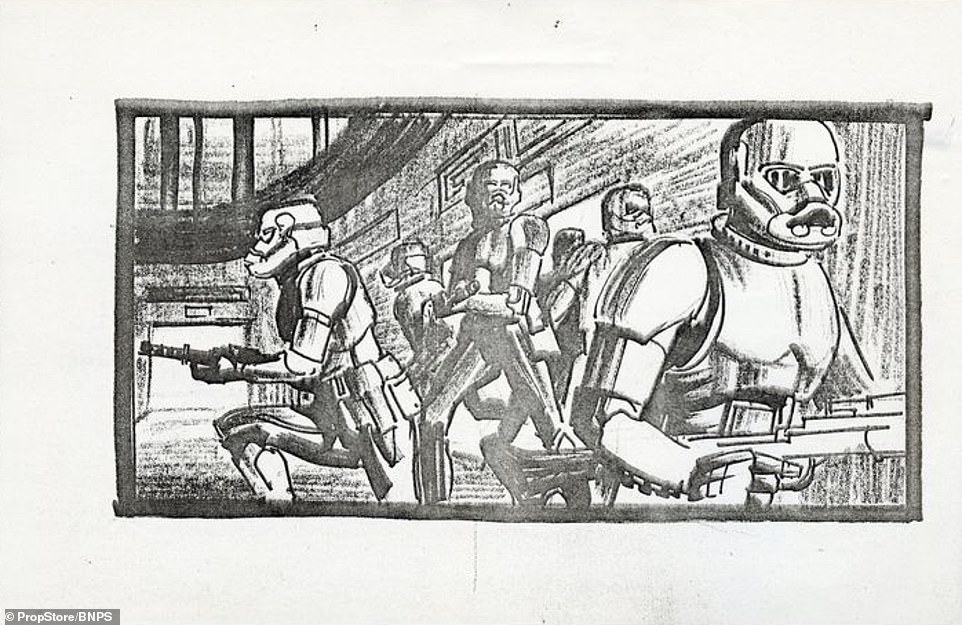 The Stormtroopers do not look unsimilar to the final designs that were featured in the hit sci-fi films, beloved by millions 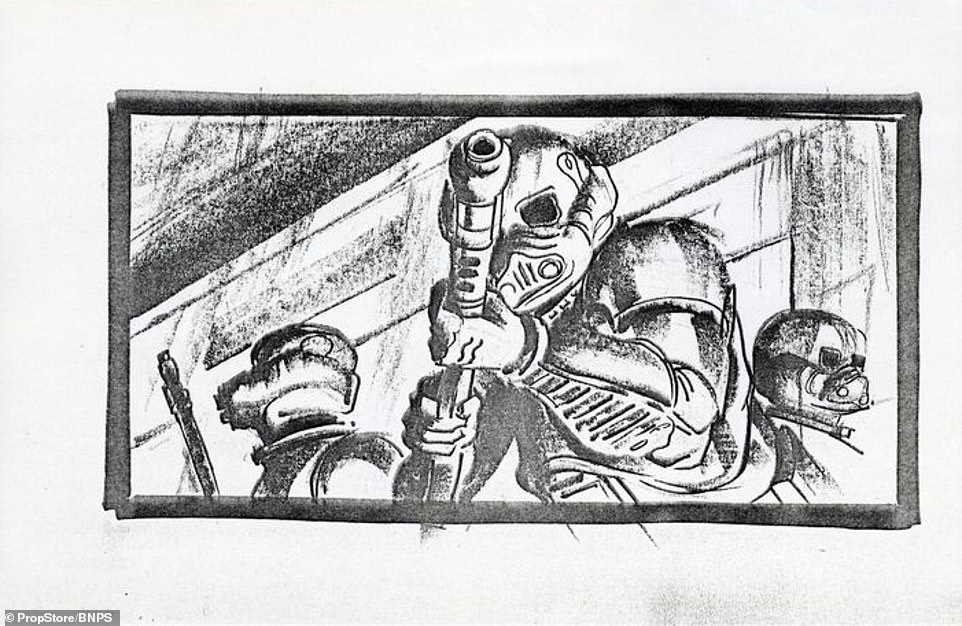 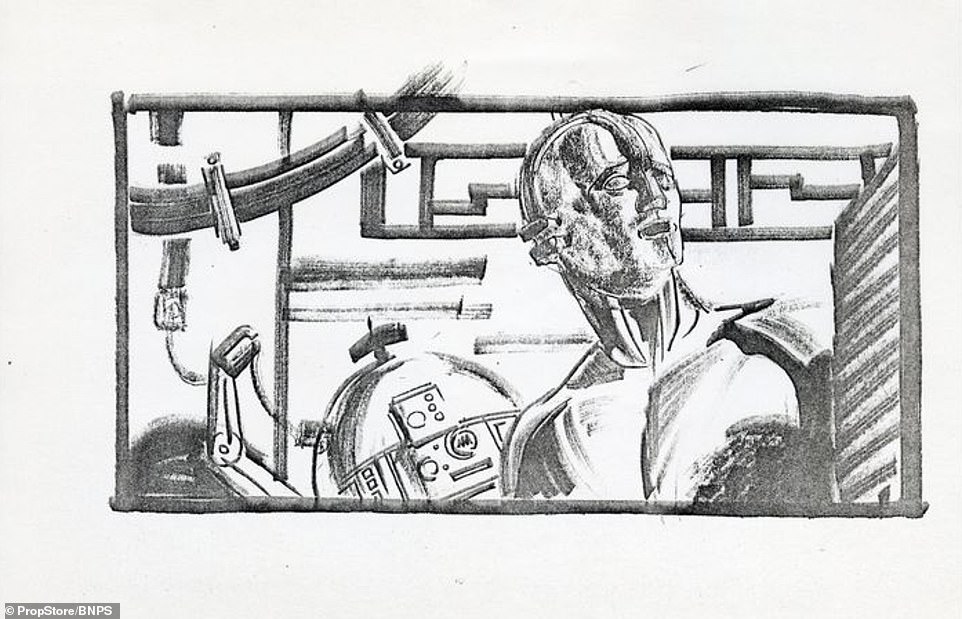 The storyboard sketches were drawn by British artist Ivor Beddoes and are tipped to sell for £6,000 at auctioneers Propstore of Rickmansworth, Herts.

The drawings were kept by the film’s advertising supervisor, Charles ‘Charley’ Lippincott.

Stephen Lane, CEO of Propstore, said: ‘These drawings are from the earliest concept artists for Star Wars and they show ideas that never materialised.

‘They date from a very early stage when Luke was still scripted as a female character – George Lucas later created two characters, Luke and Leia.

‘George Lucas was not known as scriptwriter – it was hard work for him and required lots of drafts, so there really was an evolution of the story and its characters.’

Mr Lane explained that the decision by director JJ Abrams to include a female lead in the form of Rey Skywalker in his 2014 sequel The Force Awakens was a ‘deliberate homage’ to Lucas’ early influence. 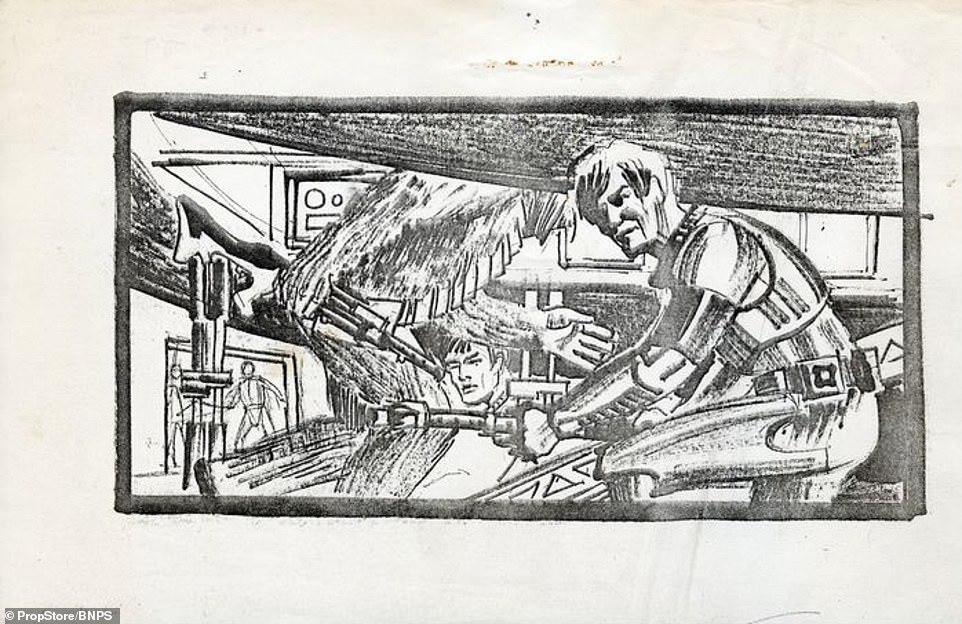 Chewbacca and Han Solo are seen in this drawing, which looks very similar to a scene that appeared in the final movie 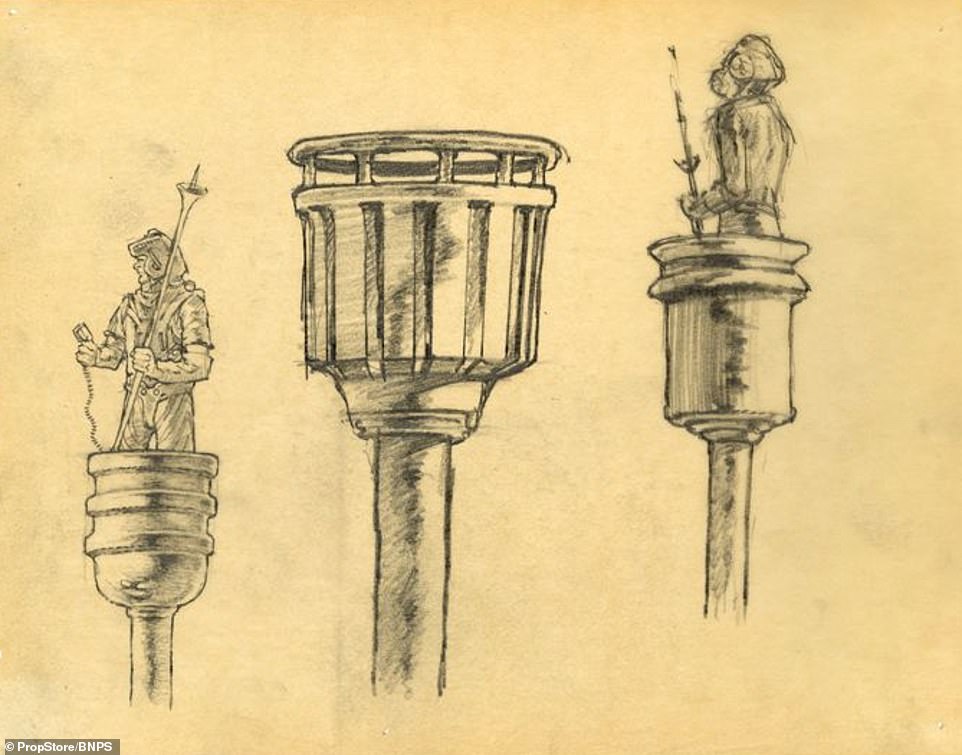 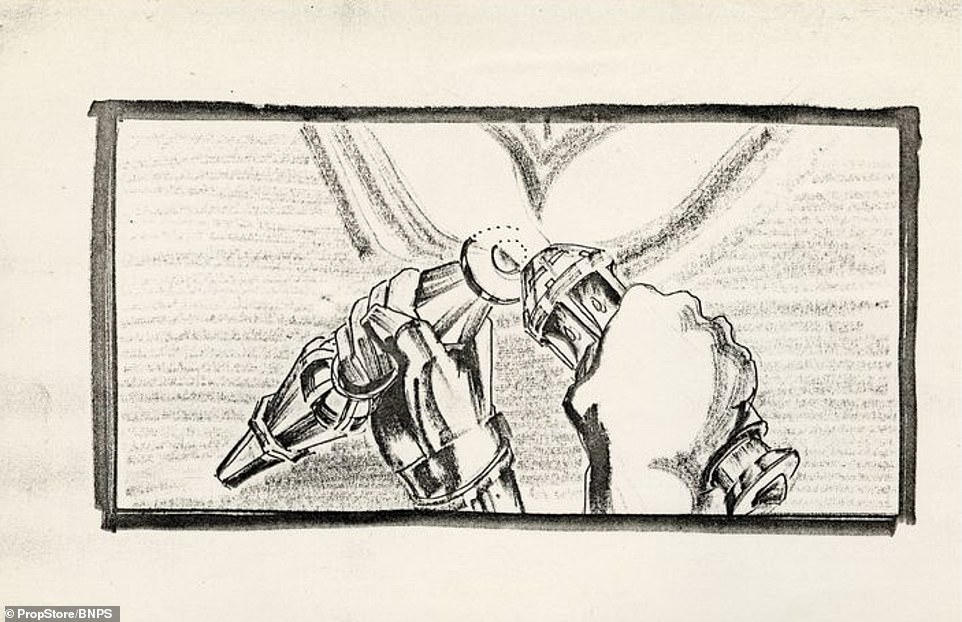 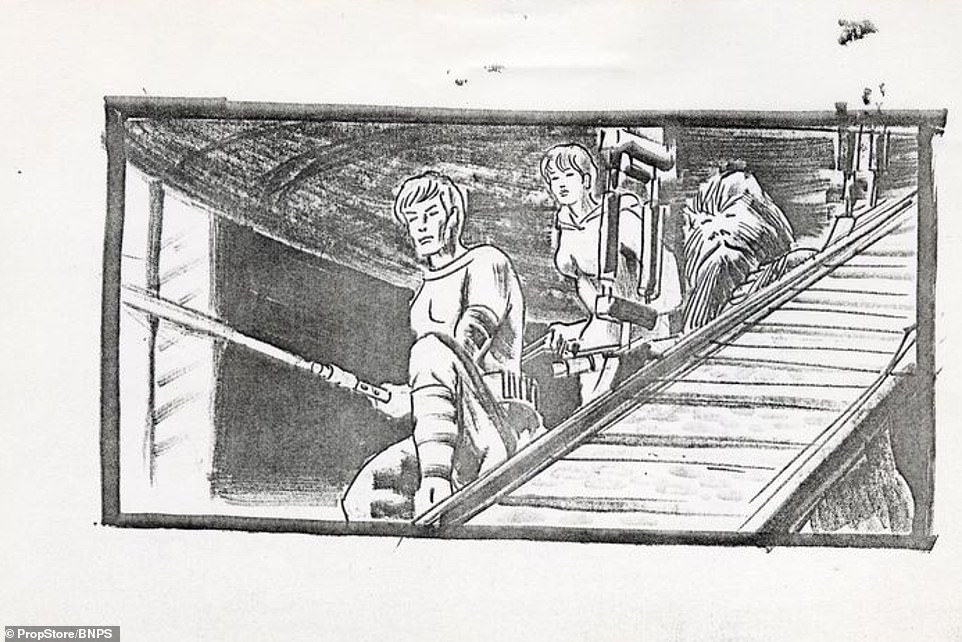 He said: ‘It was a huge homage to Lucas’ original concepts that never made it to the screen. The new films are full of easter eggs related to his early material’.

A concept drawing of CP-3-O, one of the film’s iconic droids, sketched on a 15ins by 8ins strip of toilet paper is also included in the sale. It is worth £12,000.

Another sketch depicting Han Solo and Chewbacca in the cockpit of the Millennium Falcon is being sold for £2,000.

The drawings will be sold on November 6.

Pioneering Brits to test out 'green' Covid vaccine made from plants