Nicola Sturgeon was last night accused of a ‘self-indulgent waste of time’ as she announced plans for a second referendum on Scottish independence next year.

The SNP leader said she would press ahead with another vote on October 19, 2023, despite failing to win permission from the UK government.

Miss Sturgeon said Scotland had ‘paid a price’ for remaining within the UK and claimed that young people had been ‘robbed of opportunity’.

Unveiling her latest plan to break up the UK in the Scottish Parliament, she added: ‘Now is the time for independence.’

But in a significant climbdown, she ruled out holding a wildcat referendum if the courts refuse her permission.

Under the terms of Scotland’s devolution deal, Miss Sturgeon needs the consent of the UK government to hold a legal referendum on independence. 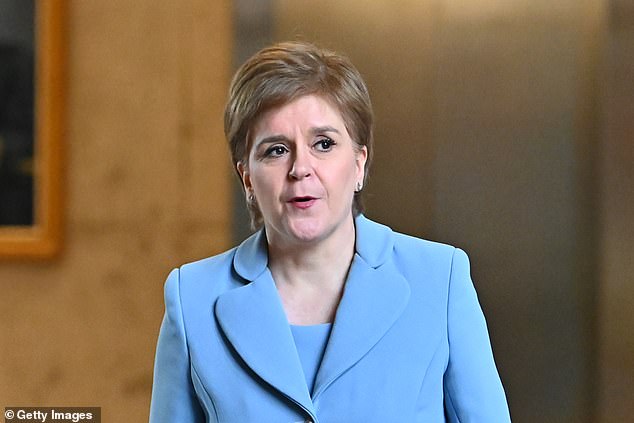 Divisive: Nicola Sturgeon was last night accused of a ‘self-indulgent waste of time’ as she announced plans for a second referendum on Scottish independence next year

Instead, Miss Sturgeon will now ask the Supreme Court to rule on whether she can hold a ‘consultative’ referendum on the same question: ‘Should Scotland be an independent country?’

She said: ‘If it does transpire there is no lawful way for this parliament to give the people of Scotland the choice of independence in a referendum… my party will fight the UK general election on this single question.’

Scottish Tory leader Douglas Ross described Miss Sturgeon’s statement as ‘a melodramatic, self-indulgent, irresponsible waste of time’ and pledged to boycott any vote. ‘We won’t take part in a pretend poll when there is real work to be done,’ he said.

Scottish Labour leader Anas Sarwar said it was wrong to stir up divisive constitutional issues when the country was still recovering from the pandemic.

He said that ‘pandemic Nicola’ had been replaced by ‘partisan Nicola’ who ‘wants to divide our country… and pursue a referendum two-thirds of Scots don’t want right now’.

Mr Johnson urged the Scottish first minister to focus on the economy and cost of living, saying that the UK would have a ‘stronger country together’.

A No10 spokesman made clear the Prime Minister continues to believe it is ‘not the time to be talking about’ a second referendum, adding: ‘Our position remains unchanged that both ours and the Scottish government’s priority should be working together with a relentless focus on the issues we know matter to people up and down the country.’

Miss Sturgeon acknowledged that securing consent was the only way of putting the legality of the referendum ‘beyond doubt’.