London: Amid the public outpouring of grief outside Buckingham Palace the day after Queen Elizabeth II’s death, there was an unmistakable sense of expectation.

The moment King Charles III’s motorcade appeared at the top of Constitution Hill, the cheers began. When the new monarch stepped out of the car, there was genuine applause and shouts of “God save the King”.

“You could see the relief on the King’s face as he went straight to the crowd,” says Katie Nicholl, author of The New Royals: Queen Elizabeth’s Legacy and the Future of the Crown. 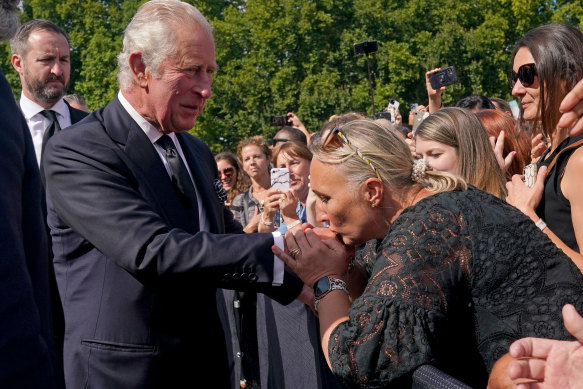 The moment King Charles III made it possible to imagine him as a “people’s king”.Credit:Getty

He was there to fulfil his first official act as King and meet the prime minister. Together with the Queen Consort, they shook hands and spoke with mourners for 10 minutes. At one point, one woman kissed him on the cheek and another on the hand.

“To go straight to the people … that, to me, said everything we need to know about his tenure as king,” says Nicholl.

Such tactile exchanges would have been inconceivable from the Queen whose subjects respectfully stood back or offered her flowers. Charles seemed unfazed by the physical affection, almost welcoming it, just as he’d done for the past five decades as the prince of Wales. Buoyed by the sympathy of the crowd, it was clear that he’d come to establish an immediate connection with the people. 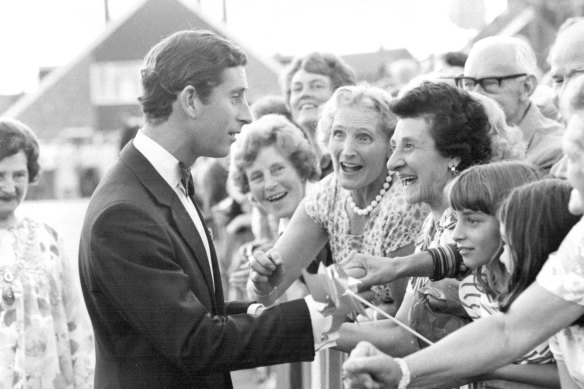 As the prince of Wales, Charles was comfortable getting close to the crowd.Credit:Syndication International

It’s being described by some commentators as “the moment” and reveals a rather interesting possibility: could Charles one day be the People’s King?

If Queen Elizabeth II’s steadfast commitment to duty was underpinned by the belief in a divine calling, her eldest son may be more personal in his approach.

At three years old, Charles Philip Arthur George became Britain’s heir to the throne. As his mother was proclaimed queen following King George VI’s death, the young prince’s destiny was sealed. But it would be 70 years before he fulfilled his calling.

Mourning his mother’s death under the glare of TV cameras this week revealed some clues about what type of monarch Britain can expect. It also served as a reminder of the brutal rhythm of royal life, where mourning is conducted in public and within the bounds of excruciatingly detailed ritual. 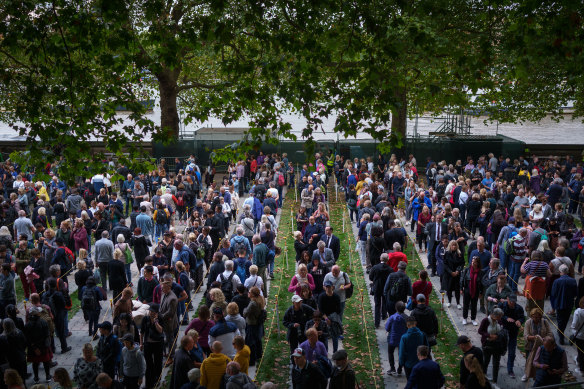 The final stages of the massive queue in central London to pass by the Queen’s casket.Credit:Getty

On Wednesday, King Charles III led the procession behind the Queen’s casket walking with his siblings and sons, princes William and Harry. Crowds stretched for the two-kilometre journey from Buckingham Palace to Westminster Hall where the family held a service before ceremonially handing the Queen’s coffin over to the nation for her public farewell.

Queen Elizabeth II once said she had “to be seen to be believed” and this was true in her death. Like every monarch since Edward VII, members of the public are invited to file past the coffin before the funeral on Monday.

On the banks of the Thames, the sense of poignancy was palpable as people lined up to say a final goodbye to their queen. The camaraderie among queue neighbours-turned-friends was reminiscent of a wartime generation: spirited and not willing to sit on the sidelines of history.

Will King Charles III unify a nation in the same way as his mother? Can he forge the same sense of admiration and gratitude from his subjects?

In his first address as monarch, 24 hours after he ascended the throne, the 73-year-old acknowledged the unrelenting reality of his tenure head-on: “I, too, now solemnly pledge myself, throughout the remaining time God grants me, to uphold the constitutional principles at the heart of our nation.”

He also made an offer of reconciliation to his younger son, the Duke of Sussex, making mention of his “love for Harry and Meghan as they continue to build their lives overseas”. It was a gesture of goodwill amid an increasingly sharp focus on the fractured relationship between father and son.

“We are seeing him publicly hand a significant olive branch to the Sussexes,” says Nicholl, who understands Charles has wanted a genuine reconciliation with Prince Harry for a long time.

In another example of how the King may balance family with duty, he barred Prince Andrew and Prince Harry from wearing military uniform during his mother’s coffin procession but granted them permission to wear uniform for the final vigil at Westminster Hall. The privilege is normally reserved for “working” members of the royal family. 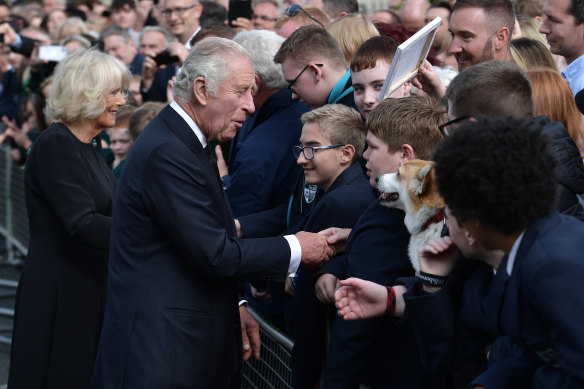 It is estimated King Charles III travelled 2400 kilometres during the first week of his reign. The notorious workaholic – he skips lunch and works late into the night – travelled to Northern Ireland with Camilla where they greeted crowds at Hillsborough Castle. Again, they shook hands, received flowers and at one point, Charles stroked the head and shook the paw of Connie the corgi.

“We have a lot of those at home,” he told owner Eleanor Flynn.

Editor at large of The Australian Women’s Weekly, Juliet Rieden, who has accompanied Charles on a number of royal tours, wasn’t surprised by the King’s natural ease with well-wishers.

“All of the royal family this week have shown that they are very keen to maintain a strong connection to the people,” she says. “They are doing so in the Queen’s memory and to comfort the people in their loss as much as people are comforting them through this time of grieving.” 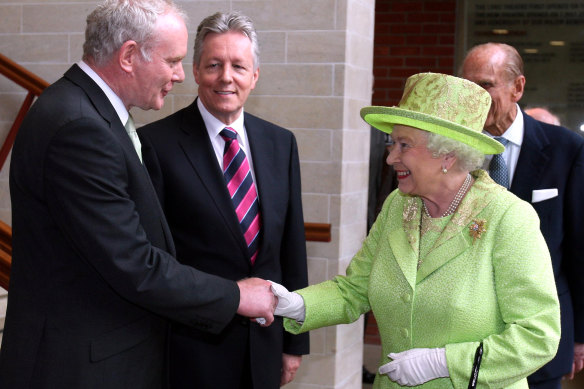 Speaking to dignitaries at Hillsborough Castle, Charles reflected on the role his mother played in reconciliation in Northern Ireland.

“My mother felt deeply, I know, the significance of the role she herself played in bringing together those whom history had separated, and in extending a hand to make possible the healing of long-held hurts,” he said.

Making reference to Lord Louis Mountbatten, his great-uncle killed by the IRA in 1979, the King said the late Queen “never ceased to pray for the best of times for this place and for its people . . .  whose sorrows our family had felt”.

At a time of sour relations between nationalists and unionists in the aftermath of Brexit, his comments echoed the quiet diplomacy that defined Queen Elizabeth II’s reign. Another test will be how he responds to the discussions in various Commonwealth countries about their links to the Crown and potential moves towards becoming republics. 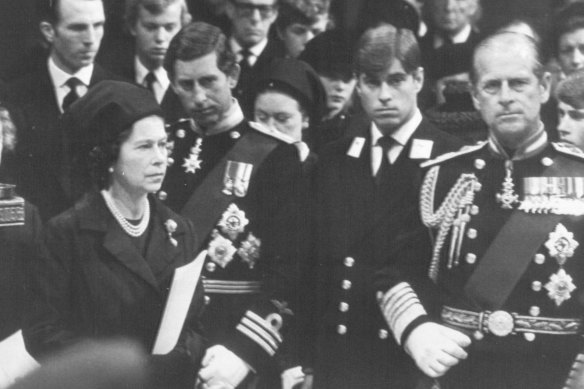 The royal family at Westminster Abbey for the funeral of Lord Mountbatten.Credit:AP

In the days following her majesty’s death, world leaders praised her subtle influence and “strength of character”.

In a televised address, Barbados’s head of state Dame Sandra Mason highlighted her stoicism and “concern for humanity” less than a year after the Caribbean nation became a republic.

Australian Prime Minister Anthony Albanese described her as a “wise and encouraging guide, always wanting the best for our nation and greeting each change with understanding, good grace and an abiding faith in the Australian people’s judgment”.

The New Royals Queen Elizabeth’s Legacy and the Future of the Crown by Katie Nicholl.Credit:

Such grace was less visible from her son at certain times this week. During the signing of the proclamation, he aired his frustration when a pen tray got in his way. At Hillsborough Castle, he grew impatient when he wrote the wrong date in the visitor’s book and struggled with a leaky pen.

Critics focused on these moments while others excused his ill-temper, saying it was merely a sign of his humanity in what was a sleepless week following the loss of his mother.

“Anyone that knows Charles will know that he has a temper,” says Nicholl. “He can’t bear incompetence, he can’t bear lateness … and he can be quick to lose his temper, particularly under pressure.

“But once he’s had that little explosion, it’s forgotten about, and he’s onto the next thing,” she says. “He doesn’t bear a grudge.”

Charles’ lifelong passion for the environment was a hallmark of his tenure as prince of Wales. In 2010, he wrote the book, Harmony, sharing his views on the state of the Earth and how its challenges are rooted in mankind.

Insiders say he will be more cautious in his early reign, shifting his focus from “campaigner” to “convener” and bringing people together to resolve complex issues.

The King and the Queen Consort are expected to move from their current London home of Clarence House to take up residence at Buckingham Palace. Charles has spoken of a desire to cut back on costs at the monarchical headquarters and his intention to open it up to the public more regularly.

“This is a different generation and times have changed,” says Rieden.

The questions of whether Charles will follow a century-old rule and give the Sussex children – Archie and Lilibet – prince and princess titles, including the right to be called his or her royal highness, remains. Nicholl believes if he does, it “will come with a caveat”.

On Thursday, Prince William spoke of how the Queen’s procession brought back painful memories of how he and Harry followed his mother’s coffin at her funeral 25 years ago.

Undeniably, Charles’ divorce to Princess Diana and her consequent death contributed to public disapproval of the former prince. For a time, many believed the crown should skip a generation and go straight to William.

Charles was defined “through the lens of his first marriage”, an unnamed friend of the King told The Times on Friday. “This change from prince to king has given people the ability to reappraise him.”

For Britain’s most well-prepared king, a new era awaits.

The New Royals, Queen Elizabeth’s Legacy and the Future of the Crown, by Katie Nicholl, is available for pre-order now.

Desert Island Discs: Kate Moss was targeted by predators as a teen