Brussels: Russia’s Wagner Group mercenaries have sent a “bloodied” sledgehammer in a violin case to the European Parliament after members started proceedings to label them as terrorists.

Sledgehammers have become an unofficial symbol of the Kremlin-linked group because its fighters have used them to kill during overseas missions.

In a video posted on one of its Telegram channels, a suited lawyer working for Wagner Group carries a violin case into a bare room and places it on a table. 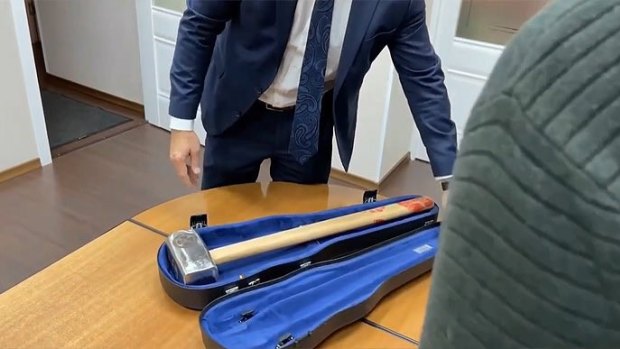 A sledgehammer sent by the Wagner Group as a stunt to the European Parliament. Wagner fighters are fighting for Russia in Ukraine.Credit:Twitter/@IuliiaMendel

He lifts the lid of the violin case, showing off a highly polished sledgehammer. The head has been engraved with Wagner’s logo and the handle has been dabbed with red paint to depict blood.

In a separate statement, Yevgeny Prigozhin, the financier and founder of Wagner Group known as Putin’s chef, said that he was sending the sledgehammer to the European Parliament as “information” before MEPs decide whether to label Wagner Group as a terrorist organisation. He also said that he was sad about this prospect.

The European Parliament this week declared Russia a terrorist state for invading Ukraine. 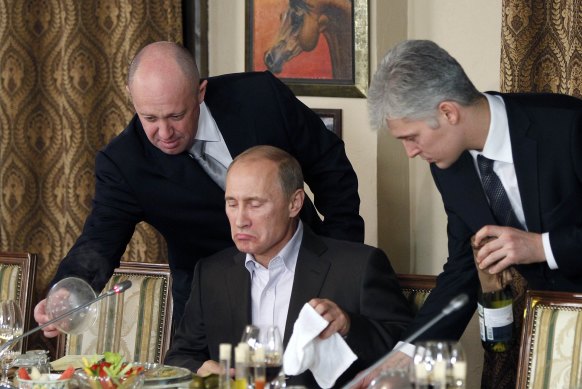 Prigozhin has been nicknamed Putin’s chef because he runs a catering company and was photographed serving Kremlin guests alongside the Russian leader, most notably George W Bush when he visited Moscow as US president 20 years ago.

“If anyone needed further proof of Russia being a state sponsoring terrorism: Prigozhin just sent it in a violin case,” said Daniel Freund, a German Green MEP.

Wagner Group has earned a reputation for distasteful stunts, including posting videos of its fighters posing with musical instruments in bombed-out towns in Donbas, east Ukraine.

Wagner mercenaries refer to themselves as musicians and their fighting group as an orchestra.

Wagner Group was given its name by one of its Russian special forces founders in 2014 who used “Wagner” as his call sign.

“Instead of a horse’s head, a sledgehammer. ‘Godfather’ games with a St Petersburg pronunciation,” Ksenia Sobchak, a Moscow socialite and TV personality who fled Russia this year after being accused of embezzlement, told her 1.4 million subscribers.

This month Wagner posted a video of one of its fighters smashing the head of a convict who signed up to fight in Ukraine but then tried to flee to the Ukrainian side. Other videos have shown Wagner mercenaries killing people captured in the Middle East with sledgehammers.

Prigozhin appears to encourage this notoriety. He initially welcomed the killing of the convict with a sledgehammer and said that it had been an “excellent piece of editorial work”.

Wagner Group has come to prominence since the Kremlin invaded Ukraine in February.

The Kremlin, which previously denied Wagner’s existence, has allowed it to openly recruit across Russia, although it is technically illegal under Russian law to fight in a mercenary group.

Headed by Prigozhin, Wagner has also recruited heavily from prisons. One estimate said that as many as 23,000 convicts were now fighting for Wagner in Ukraine.