Washington: US President Donald Trump's iron grip on his party showed further signs of weakening as at least three Republicans, including a member of the House leadership, said they would vote to impeach him after his supporters stormed the Capitol.

Republican Liz Cheney – the No. 3 Republican in the House and highest-ranking woman in the GOP – said she will vote to impeach Trump, a major split within the party after his supporters “attacked the US Capitol to obstruct the process of our democracy and stop the counting of presidential electoral votes" on January 6. 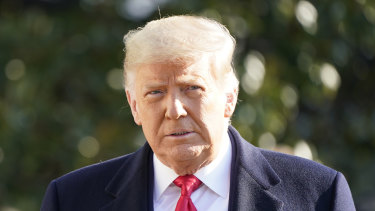 Donald Trump could be the only president to be impeached twice. Credit:AP

While touring a section of newly constructed wall along the US-Mexico border on Tuesday, Trump said: "The impeachment hoax is a continuation of the greatest and most vicious witch hunt in the history of our country and is causing tremendous anger and division and pain, far greater than most people will ever understand, which is very dangerous for the US, especially at this very tender time."

Two other Republican House members, John Katko and Adam Kinzinger, said they would also vote for the historic second impeachment of the Republican president, who leaves office in just eight days.

Their announcements came as Republican leaders in the US House of Representatives on Tuesday refrained from urging their members to vote against impeaching Trump, saying it was a matter of individual conscience after his supporters ransacked the Capitol.

Cheney, the daughter of former US vice president Dick Cheney who served in the Bush administration, also faulted Trump for not stepping in after the riot started. 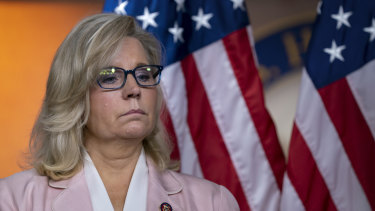 Liz Cheney, the No. 3 Republican in the US House of Representatives, said she will vote to impeach the president.Credit:AP

"The President could have immediately and forcefully intervened to stop the violence. He did not," she said. "There has never been a greater betrayal by a president of the US of his office and his oath to the Constitution."

"To allow the President of the US to incite this attack without consequence is a direct threat to the future of our democracy," Katko said. "For that reason, I cannot sit by without taking action. I will vote to impeach this President."

Cheney had previous public breaks with the President – on foreign policy, how he's handled the coronavirus pandemic and her backing of a primary challenger to Republican Representative Tom Massie of Kentucky.

She has been a target of internal GOP criticism from Trump allies, such as House Freedom Caucus Chairman Andy Biggs of Arizona, Representative Jim Jordan of Ohio and Representative Chip Roy of Texas.

However when Democrats brought impeachment charges against Trump in 2019, Cheney was a staunch defender of the president. She also regularly voted in favor of his agenda.

The New York Times is reporting Republican Senate leader Mitch McConnell has told associates that he believes Trump committed impeachable offenses and that he is pleased that Democrats are moving to impeach him, believing that it will make it easier to purge him from the party, according to people familiar with his thinking.

The paper reports Republican officials briefed on conversations that Republican House minority leader Kevin McCarthy had with other Republicans, asking if he should call on Trump to resign.

McCarthy and other party leaders have decided not to formally lobby Republicans to vote "no," to impeachment.

"In private, McCarthy reached out to a leading House Democrat to see if the chamber would be willing to pursue a censure vote, although Speaker Nancy Pelosi has ruled it out," The New York Times reported.

Several Republicans have blamed Trump for the violent storming of the Capitol by his supporters.

Ohio Republican Senator Rob Portman said on Monday: "Both in his words before the attack on the Capitol and in his actions afterward, President Trump bears some responsibility for what happened on January 6."

Jeweler buries $1.4MILLION stash of gold, diamonds and jewels in US for ultimate treasure hunt – The Sun