Romancing the throne! Royal fan who stole kiss with King Charles reveals: ‘I know it was being cheeky but I just had to’

The woman who stole a kiss from King Charles III as he greeted his subjects outside Buckingham Palace as they lined up to glimpse their new monarch and pay their respects to the late Queen.

Janny Assiminios stunned the new monarch as she leant over a crash barrier to grab the King’s face and pull him in for a kiss on the cheek.

Do you know the woman who kissed King Charles’ hand?

Email us at: [email protected]

While the act could be considered a breach of royal protocol, Charles was gracious in the moment and appeared to thank the 73-year-old, who maintains that she knew it was cheeky but that she ‘just had to’.

Moments later, a second woman kissed his outstretched hand as he passed by.

Janny, originally from Cyprus and now living in Holloway, North London, told MailOnline: ‘I know it was being cheeky but I just had to.

‘I have always been a big fan on Charles. I was very nervous, but excited when I saw he was coming towards me.

‘I had only planned to shake his hand, but as he took my hand thought I would ask if I could give him a kiss. He said he didn’t mind and I just kissed his cheek.

‘He was lovely about it and smiled and I looked into his eyes and I knew he was okay about it.’

The moment, which was captured on camera as Charles and his wife Camilla met dozens of well-wishers and mourners outside the gates of Buckingham Palace, spurred congratulations from police officers and others in the crowd.

She said the spur-of-the-moment kiss summed up the affection that many felt for the new King. 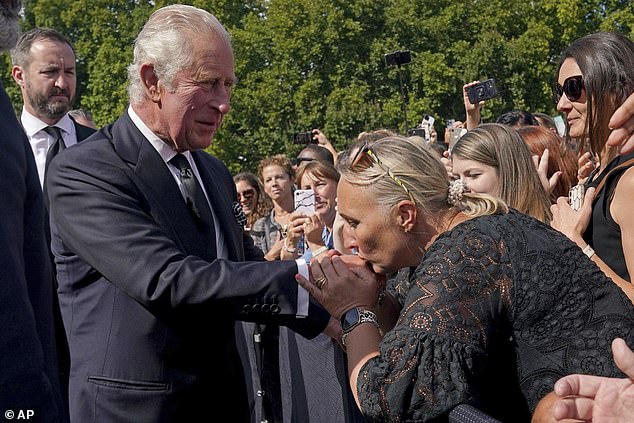 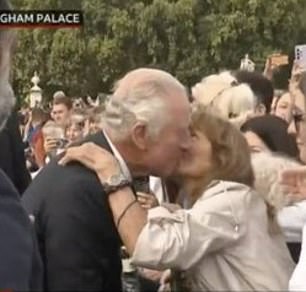 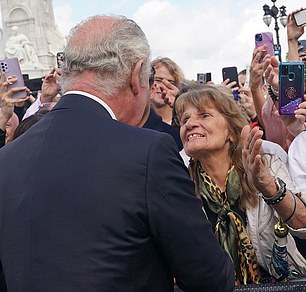 Janny, who travelled to London with friends to pay her respects, said the death of the Queen brought back memories from the passing of her husband George four years ago.

‘The death of the Queen must have been very hard for Charles,’ she said. ‘I have always admired the Queen and her husband.

‘They were such wonderful people and you can see that from all the people who came out. I know people will support King Charles just like they have supported the Queen during her wonderful reign.’

Her son, Nicholas, said his mother has been a ‘staunch royalist’ all her life and has attended several major royal events.

‘She was there At Charles’ wedding to Diana, At the birth of William and Harry, and at Diana’s funeral,’ he said.

‘She is chuffed, to put it mildly’.

The King was met with cheers and shouts of ‘God save the King’ as he stepped out of his Bentley and moved trough the crowd of thousands, stopping to shake hands and speak with people who had spent all morning awaiting his arrival.

He made an effort to address as many people in the crowd as possible, and accepted a single rose from one of the many well wishers who brought flowers along for the occasion. 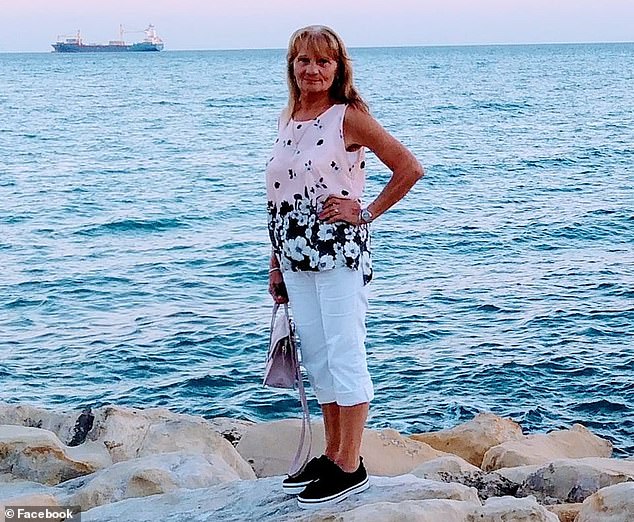 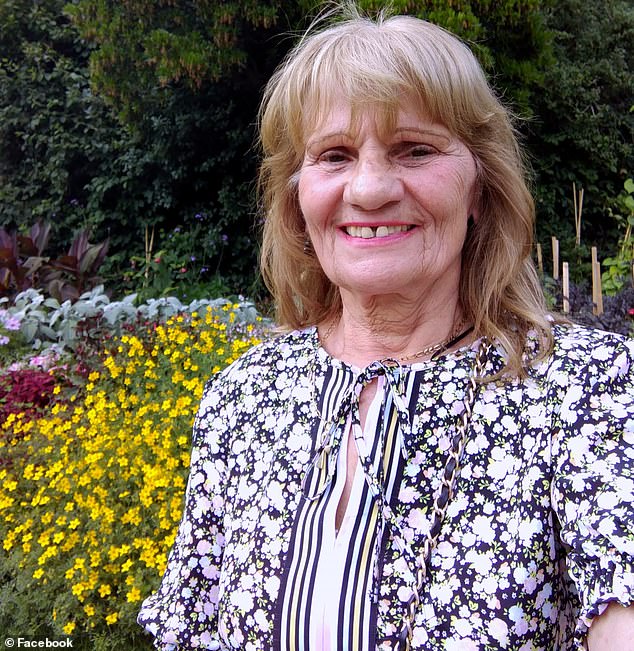 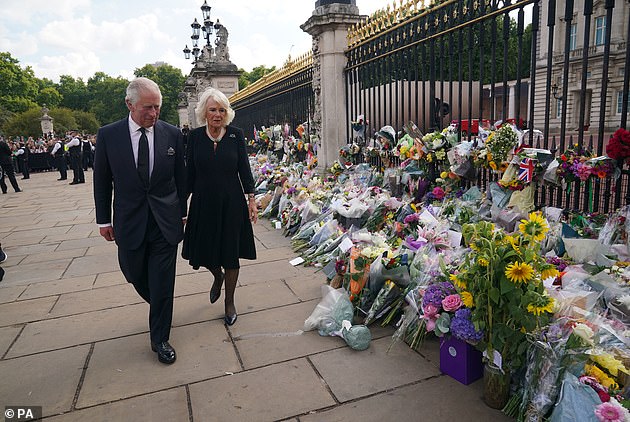 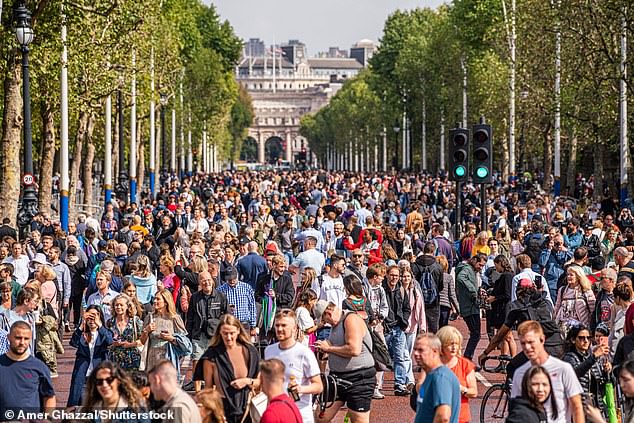 In total, he spent 12 minutes with the public outside palace gates.

Film director Raynald Leconte, 47, who is from New York, said he was lucky enough to speak to the King and Queen Consort outside Buckingham Palace.

Among the crowds, retired Ammar Al-Baldawi, 64, from Hertfordshire, said: ‘It was impressive, touching, a good move to come out to the crowds.

‘I think that’s where the royal family needs to communicate with the people now. These are true loyalists here and it’s nice to see him back in post, taking charge of the family and the Crown, which is reassuring.’

Queen Consort Camilla arrived at Buckingham Palace with Charles but maintained a distance as he greeted the public and accepted their well wishes.

She returned to his side to appreciate the bouquets of flowers and handwritten notes left at the palace gates. 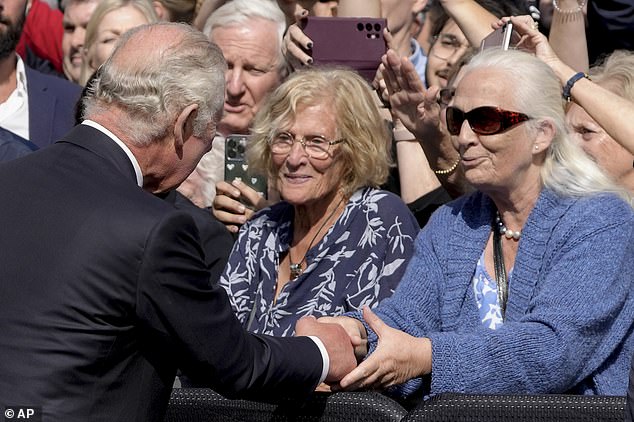 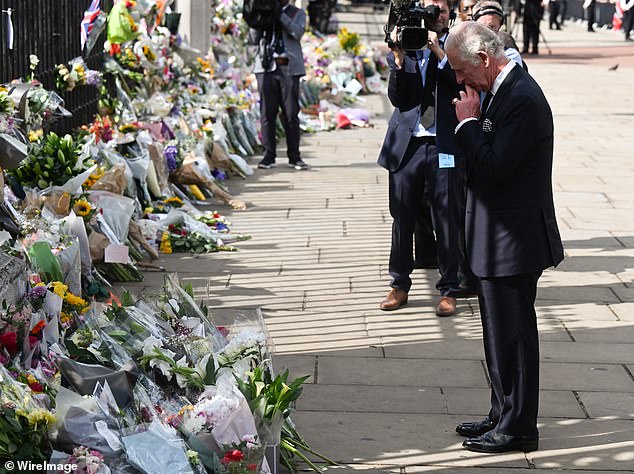 Police had moved the crowds back from the main entrance of Buckingham Palace at about 1.30pm in anticipation of the King’s visit, with officers creating a 30ft pathway between the crowds and the bouquets of flowers.

Charles and his wife Camilla landed at RAF Northolt just after 1.30pm after leaving Balmoral, where they had stayed overnight after racing up to be at the late Queen’s bedside.

The King met Prime Minister Liz Truss this afternoon, before making a televised speech to the nation at 6pm.

Members of the royal family had made the urgent dash to be with the frail monarch as her health failed yesterday.

The Firm made an announcement of her ‘peaceful’ death at 6.30pm at Balmoral, which is considered one of her favourite residences. She and her late husband, Prince Philip, often spent the summer there. 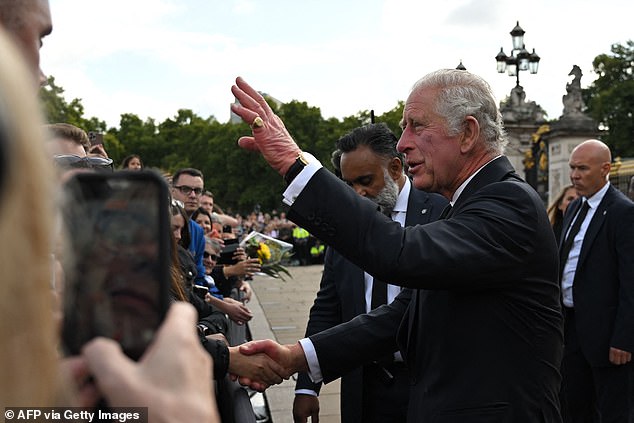 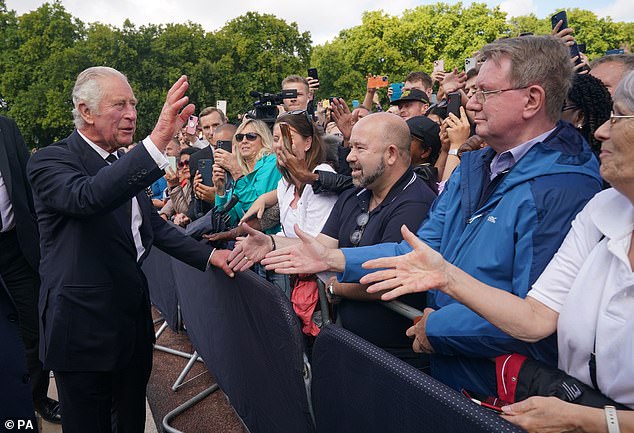 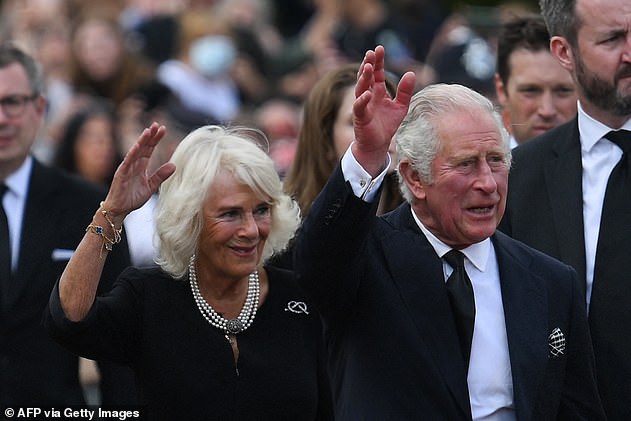 Prince William – now using the title of the Duke of Cornwall and Cambridge – left Balmoral just before 1pm and is travelling back to Windsor to be with his family ahead of the Accession Council, Kensington Palace said.

Princess Anne, Prince Andrew, Prince Edward and his wife Sophie, the Countess of Wessex, still remain at the estate.

‘During this period of mourning and change, my family and I will be comforted and sustained by our knowledge of the respect and deep affection in which The Queen was so widely held,’ Charles said in a statement on Thursday night.

Charles was by his mother’s side for much of the day after catching the royal helicopter from Dumfries House in Ayrshire with his wife Camilla.

His younger sister Princess Anne was already at Balmoral after royal duties also took her to Scotland.

They were joined by other senior members of the Royal Family including Her Majesty’s other two children, Andrew and Edward, and Prince William. 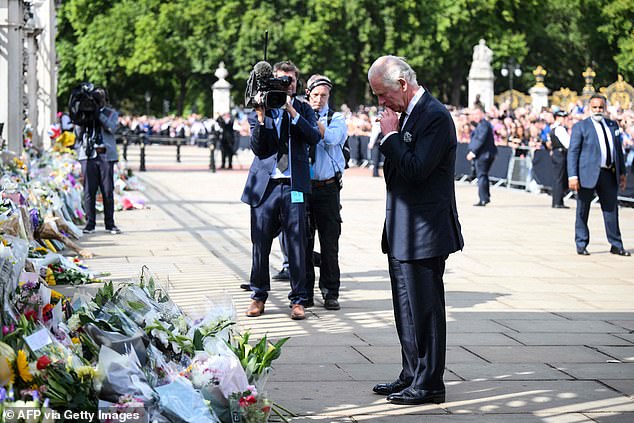 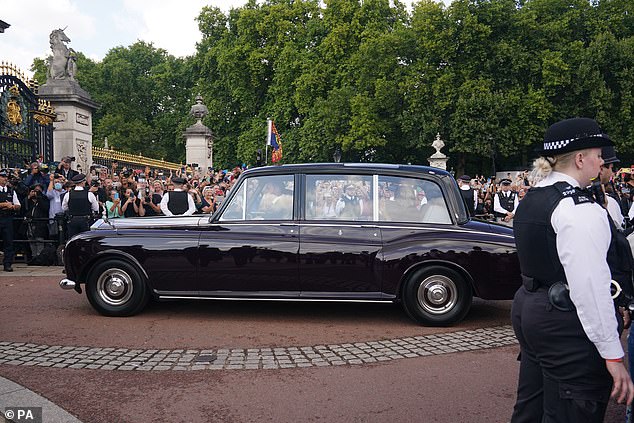 The family rushed to the Queen’s Scottish residence after an unprecedented statement from her doctors revealed they were ‘concerned’ about her health and were keeping her under medical supervision.

Charles is becoming monarch at 73 years old, nearly half a decade older than the Queen was when she found herself in the same position.

He is likely to launch a radical overhaul of the monarchy in the wake of his mother’s death, having frequently spoken about a slimmed-down front-line.

Do you know the woman who kissed King Charles’ hand? Email [email protected] 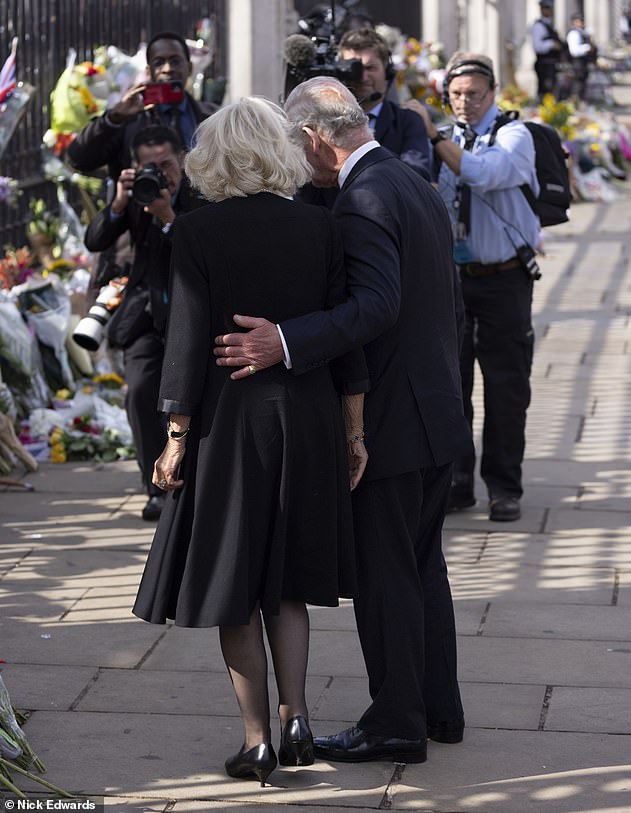 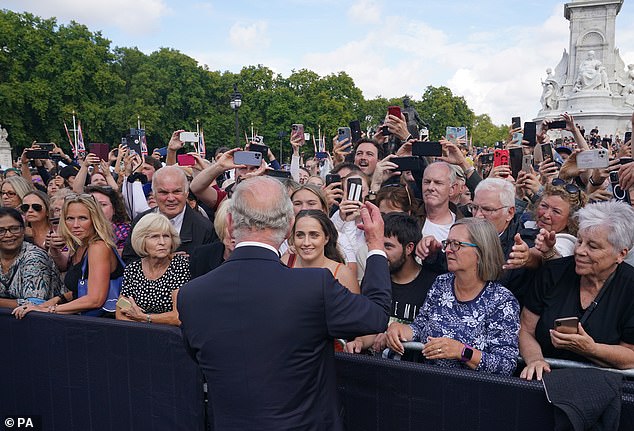 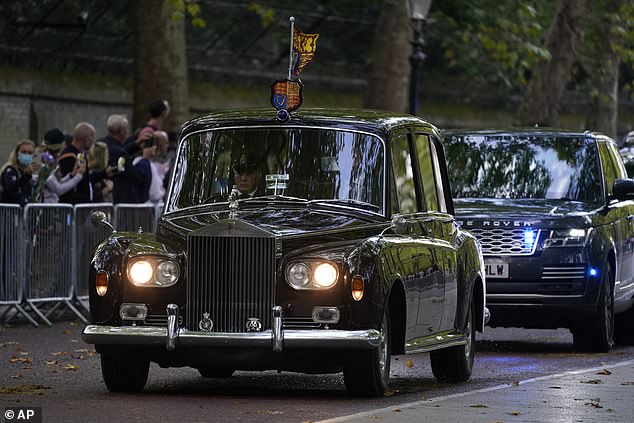 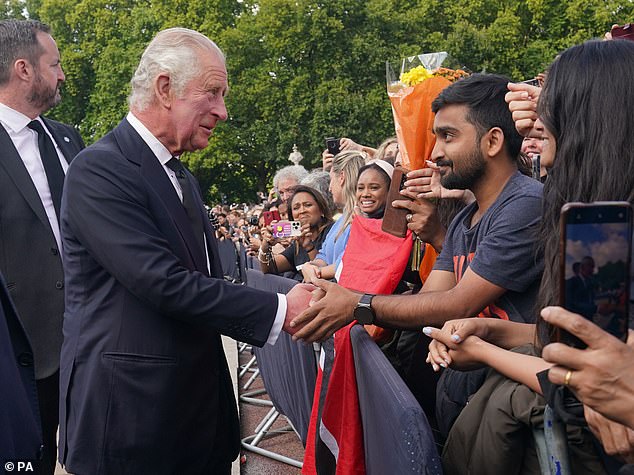 Emotional crowds gathered  to get a glimpse of the King, who appeared equally moved by the commitment

President Biden on Texas School Shooting: "It's Time to Turn This Pain Into Action"