London: Russia is firing huge Cold War-era missiles designed to destroy aircraft carriers at Ukraine’s military in Donbas because it has run out of precision rockets, according to the UK’s Ministry of Defence.

The five-and-a-half-tonne missiles were designed to carry a nuclear warhead, so using them as conventional missiles is causing vast collateral damage. 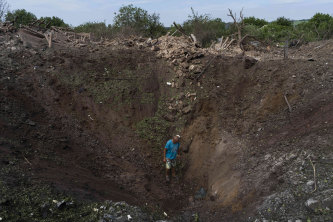 A resident walks into a crater caused by a missile strike in Druzhkivka, eastern Ukraine, last week.Credit:AP

“When employed in a ground attack role with a conventional warhead they are highly inaccurate and can therefore cause significant collateral damage and civilian casualties,” the Ministry of Defence said.

Since withdrawing from around Kyiv in March, the Russian army has concentrated its main efforts on capturing the Donbas region of eastern Ukraine. Severodonetsk is the largest city that it does not currently hold in Luhansk, which makes up half of Donbas, and is the focus of the fiercest fighting.

Ukrainian forces have withstood a battering from Russia’s artillery and air force, which have obliterated the city. The Ministry of Defence said that there was now “intense street-to-street fighting” and that “both sides are likely suffering high numbers of casualties”.

In an interview with Ukrainian media, Serhiy Haidai, the governor of Luhansk, once again said that Ukraine was simply being outgunned by Russia. 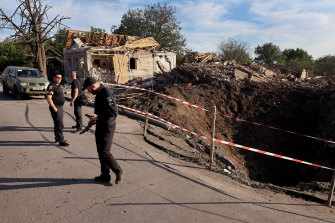 Police stand next to a crater left following a missile strike in Druzhkivka, Ukraine.Credit:Getty Images

“The only problem in Ukraine is the lack of long-range artillery,” he said.

“If there was enough artillery and ammunition for it, we would push back the enemy’s artillery, and I can guarantee that our military would clear the city completely in two days.”

Russian officials have also said that there are 400 Ukrainian soldiers and several hundred civilians sheltering in the Azot fertiliser production plant in Severodonetsk. Some Ukrainian officials have said they fear Azot could become another Azovstal – a reference to the siege in the Mariupol steelworks that lasted several weeks.

The US-based Institute for the Study of War said that Russian forces in Severodonetsk “have yet to establish full control over the city”. Away from Donbas it said that Russia’s army was preparing its defence around the Kherson region against a Ukrainian counter-offensive that has made some ground over the past couple of weeks.

It also said that Russian forces may have captured the Kinburn Split: a small spur in the northern Black Sea on the border of the Mykolaiv and Kherson districts.

“If these Russian claims are true, control of the Kinburn Split will allow Russian troops to exert greater control of the north-western Black Sea coast,” the think tank said.

Russia has suffered at least 15,000 dead in the 15 weeks since the start of the war in Ukraine – as many casualties as it suffered in the entire 10-year-long Soviet campaign in Afghanistan.

Vladimir Putin has banned dissent and any reference to the Ukraine conflict as a war, instead referring to it as a “special operation”. This means the Russian president has been unable to order a full mobilisation.

Reports from Russia have said that its army is trying to recruit contract soldiers by placing adverts in social media, websites and newspapers.

One advert, on a Russian job-seekers website, advertised for potential soldiers interested in firing rocket-propelled grenades. It offered a salary of around $US2600 ($3687) – nearly three times the average salary in Russia.