Kyiv: Ukraine said Russia had destroyed homes in the southeast and knocked out power in many areas with a new round of missile attacks as the West imposed a price cap on Russian seaborne oil to try to limit Moscow’s ability to finance its invasion.

A new barrage had been anticipated for days and came on a day when emergency blackouts were due to end, with previous damage repaired. The strikes plunged parts of Ukraine back into freezing darkness with temperatures nationwide now firmly below zero. However, Kyiv said its air defences limited the damage. 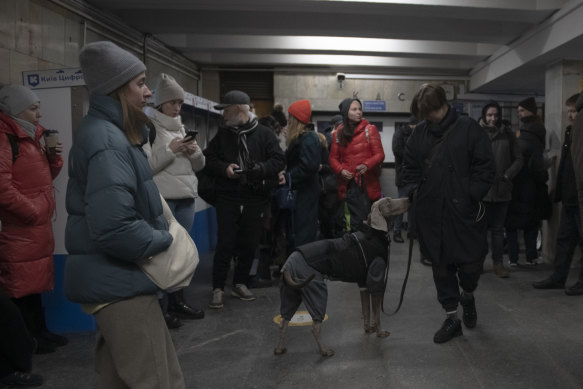 People rest in the subway station being used as a bomb shelter during a rocket attack in Kyiv on Monday.Credit:AP

Explosions were also reported at two air bases inside Russia overnight, both hundreds of miles from Ukraine. One of them, the Engels base in the Saratov region, houses bomber planes that are part of Russia’s strategic nuclear forces.

Three people were killed when a fuel tanker exploded at the air base in Ryazan, 185 kilometres southeast of Moscow, state news agency RIA said.

Saratov regional governor Roman Busargin reassured residents they were safe after what he called reports on social media of a “loud bang and a flash” at the Engels air base.

“Information about incidents at military facilities is being checked by law enforcement agencies,” he said.

The Engels base, about 730 kilometres south of Moscow, is one of two strategic bomber bases housing Russia’s air-delivered nuclear capability, comprising 60 to 70 planes.

Previous mysterious blasts have damaged arms stores and fuel depots in Russian regions near Ukraine and knocked out at least seven warplanes in Crimea, the Black Sea peninsula annexed by Russia from Ukraine in 2014.

President Vladimir Putin drove a Mercedes across the bridge linking southern Russia to Crimea on Monday, less than two months since that, too, was hit by an explosion.

Kyiv has not claimed responsibility for any of the blasts, saying only that such incidents are “karma” for Russia’s invasion.

“If something is launched into other countries’ airspace, sooner or later unknown flying objects will return to (their) departure point,” Ukrainian presidential adviser Mykhailo Podolyak wrote on Twitter on Monday (Ukraine time).

Moscow has been hitting Ukraine’s energy infrastructure roughly weekly since early October as it has been forced to retreat on some battlefronts.

This time, police in neighbouring Moldova were reported to have found missile fragments on its soil near the border with Ukraine. 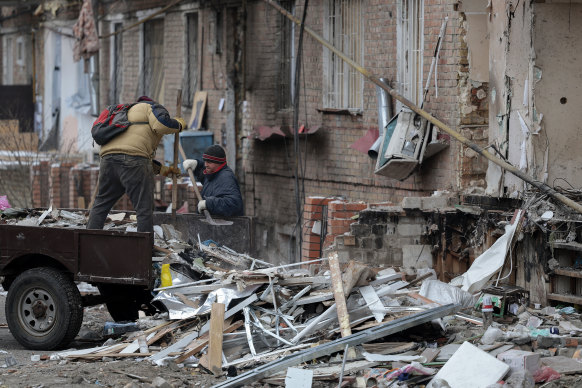 Workmen continue the clear up around buildings damaged by last week’s missile attack on December 5, in Vyshhorod, Ukraine.Credit:Getty

Missiles also hit energy facilities in the regions of Kyiv and Vinnytsia in central Ukraine, Odesa in the south and Sumy in the north, officials said.

Forty percent of the Kyiv capital region had no electricity, regional governor Oleksiy Kuleba said, praising the work of Ukrainian air defences for what he said appeared to be a lack of “critical consequences” from Monday’s attacks.

Air defences shot down more than 60 of over 70 Russian missiles fired on Monday, Ukraine’s air force command said. This included nine out of 10 missiles fired at Kyiv, officials said.

“Our guys are awesome,” Andriy Yermak, head of the Ukrainian presidential staff, wrote on Telegram.

Ukraine had only just returned to scheduled power outages from Monday rather than the emergency blackouts it has suffered since widespread Russian strikes on November 23, the worst of the attacks on energy infrastructure that began in early October.

Russia has said the barrages are designed to degrade Ukraine’s military. Ukraine says they are clearly aimed at civilians and thus constitute a war crime.

A $US60 per barrel price cap on Russian seaborne crude oil took effect on Monday, the latest Western measure to punish Moscow over its invasion. Russia is the world’s second-largest oil exporter.

The agreement allows Russian oil to be shipped to third-party countries using tankers from G7 and European Union member states, insurance companies and credit institutions, only if the cargo is bought at or below the $US60 per barrel cap.

Moscow has said it will not abide by the measure even if it has to cut production. Ukraine wants the cap set lower: Zelenskiy said $US60 was too high to deter Russia’s assault.

A Russian oil blend was selling for around $US79 a barrel in Asian markets on Monday – almost a third higher than the price cap, according to Refinitiv data and estimates from industry sources.

Both sides on the ground in Ukraine reported casualties from other attacks overnight, on an industrial enterprise and another location in southern Ukraine, and on state-run accommodation in Russian-held territory in the east.

Pro-Russian Governor Leonid Pasechnik said the dormitories were being used to house refugees and construction workers.

In Kryvyi Rih, among the largest cities in southern Ukraine, Russian rockets killed one person and wounded three just after midnight, according to the governor of the Dnipropetrovsk region, Valentyn Reznichenko.

“They aimed at an industrial enterprise,” Reznichenko said on the Telegram messaging app, without elaborating.

In the southern Kherson region, where Ukraine forced Russian forces to withdraw across the Dnipro River last month, governor Yaroslav Yanushevych said further Russian shelling had killed two people in the past 24 hours.

Reuters could not independently verify the fighting reports.