Russia’s rag-tag reinforcements: Conscripts drink and brawl on their way to the frontlines as men rush to marry single mothers and become elderly carers in desperate bid to dodge the draft

Dozens of videos began surfacing showing men swilling from cups of drink before boarding buses heading west, or else stumbling and fighting at recruitment offices and on board planes.

Footage is hard to conclusively verify, but it tallies with reports of low morale and drunkenness among Russian recruits and speaks to wider problems faced by Putin’s military – poor command, discipline and organisation – that have plagued its war effort so far. It appears those issues are unlikely to get better as the war wears on.

Meanwhile reports from within Russia itself suggested men were rushing to marry single mothers or register as elderly carers in a desperate bid to dodge the draft by having dependents. However, their hopes will likely prove in vain as the only exceptions from Putin’s sweeping laws are age, illness, or imprisonment.

It comes after border crossing points clogged with cars and plane tickets to visa-free nations sold out within hours. Some Russians reported buying tickets to destinations they didn’t know existed in order to get away. Others used scooters to skip car queues and cross into the likes of Kazakhstan, Mongolia, and Georgia 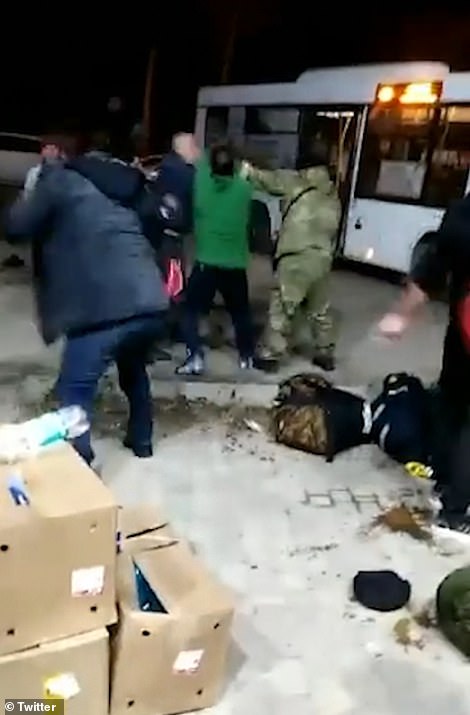 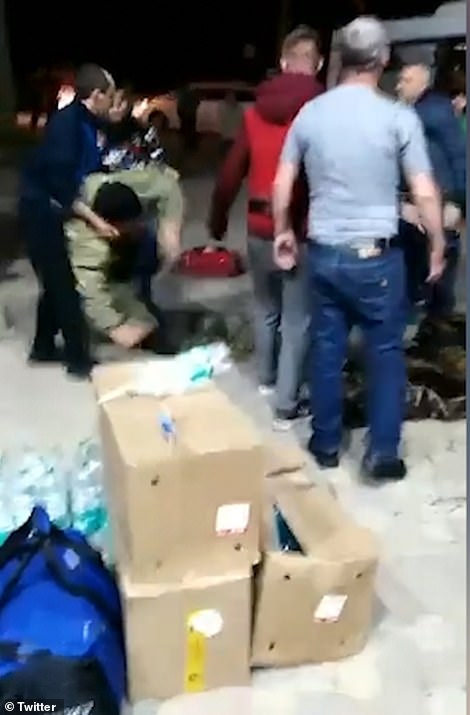 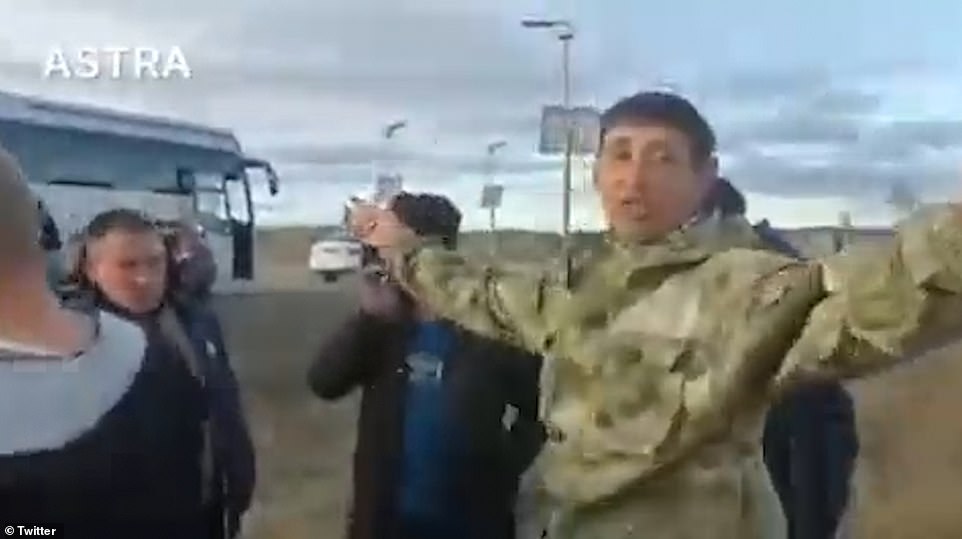 Multiple videos appear to show young Russian men drinking heavily as they are shipped off to war, suggesting that morale problems in the military are unlikely to improve as they arrive on the frontlines 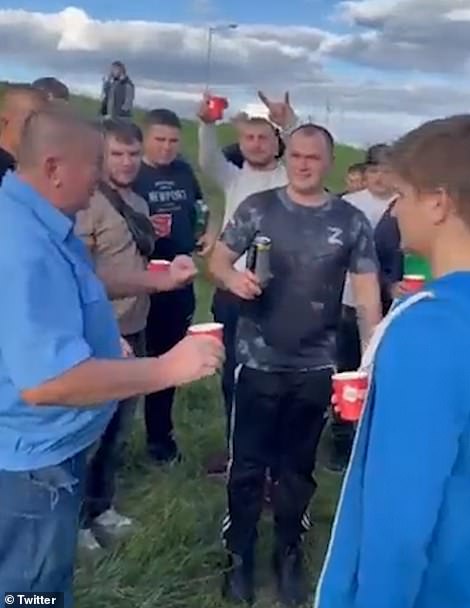 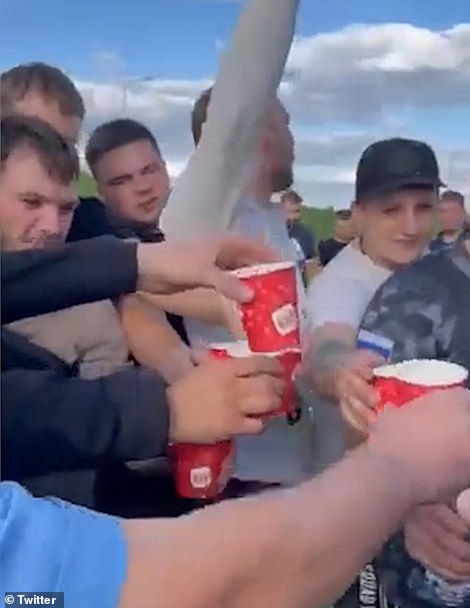 A man with a Z war symbol on his chest toasts with his fellow conscripts as they load on to a bus somewhere in Russia, before shipping out to fight against Ukraine

Aleksandr, a manager from Moscow who spoke to the New York Times, said he began packing his bags before Putin’s Wednesday-morning speech had even finished. When he arrived at the airport, tickets to Turkey and Kazakhstan had already sold out – so he flew to Namangan, in Uzbekistan.

He said that he had never heard of the city before, and neither had the young man he was sat next to on the plane who was also fleeing the country. The aircraft was full of similar people, he added. In Moscow, he left behind a wife with three children. ‘My hopes that things might remain more or less OK collapsed today,’ she said.

Dmitri, another Russia fleeing the draft, spoke out after landing in Armenia. ‘I don’t want to go to the war,’ he said. ‘I don’t want to die in this senseless war. This is a fratricidal war.’ Like almost all new Russian arrivals, he refused to give his surname for fear of reprisals.

The exodus came after Putin on Wednesday ordered what he called the ‘partial mobilisation’ of Russian military reserves – which he said would affect only those with combat experience or military service – in the hopes of raising 300,000 troops to shore up his failing war in Ukraine.

However, the actual legal notice published by the Ministry of Defence places no limits on who can be drafted. The paragraph stating the number to be called up was also censored out, with sources suggesting it actually allows 1million to be press-ganged into the armed forces.

Reports from villages and towns in Russia’s remote Siberia region suggest students are being marched out of universities en masse to join the military, and men – sometimes in middle age – are being woken in the middle of the night to be handed draft papers.

The draft appears to be falling hardest in the country’s remotest and poorest regions – those least likely to resist Putin’s order, or whose dissent will not reach the Kremlin, hundreds of miles away to the West.

Ramzan Kadyrov, the Chechen warlord and staunch Putin ally, has been filmed telling his people they will not be drafted because they have already contributed to the war. Similarly, Belarus dictator Alexander Lukashenko – who faced down a huge protest movement just two years ago – has also said there will be no conscription there.

‘The mobilisation is in Russia. … There will be no mobilisation (here),’ state media quoted Lukashenko as saying.

However, there are reports that Russian men flying to Belarus in an attempt to escape the mobilisation are being turned away from the border.

The Baltic countries of Estonia, Latvia and Lithuania are also turning away Russians – though that is merely an extension of an earlier policy banning tourists. All three nations heavily oppose the war.

Finland, also an opponent of the war, has said it will look into banning Russians from entering having until-now resisted turning away tourists.

It comes as Putin looks to escalate his war in Ukraine, which has now been dragging on for seven months and has left Moscow with little to show for its efforts.

Voting is now underway in sham referendums which are almost certain to end with four regions of Ukraine being annexed to Russia itself.

Though the move changes nothing on the ground, it will allow Putin to spin the lie to his own people that any Ukrainian attacks on those areas are attacks on Russia itself.

That gives him an expanded suite of options for responding – including declaring all-out war and mobilising more men, or even deploying Russia’s nuclear weapons.

Serhiy Gaidai, Ukraine’s Luhansk region governor, said that in the town of Starobilsk, Russian authorities banned the population from leaving the city until Tuesday and armed groups had been sent to search homes and coerce people to get out to take part in the referendum.

‘Today, the best thing for the people of Kherson would be not to open their doors,’ said Yuriy Sobolevsky, the displaced Ukrainian first deputy chairman of the Kherson regional council, said on messaging app Telegram.

The referendums have been condemned by Ukraine and the West as illegitimate and a choreographed precursor to illegal annexation. There will be no independent observers, and much of the pre-war population has fled.

The Organisation for Security and Cooperation in Europe (OSCE), which monitors elections, said the outcomes would have no legal bearing as they do not conform with Ukraine law or international standards and the areas are not secure.

Gaidai said that in the Russian-held town of Bilovodsk, a company director told employees voting was compulsory and anyone refusing to take part would be fired and their names given to security services.

‘The mood of the Russians is panicky because they were not ready to carry out so quickly this so-called referendum, there is no support, there’s not enough people,’ Kherson’s Sobolevsky said on messaging app Telegram.

Gaidai decried the plebiscites as ‘elections without elections’. He said people were being forced to fill out ‘pieces of paper’ without privacy in kitchens and residential yards, with towns sealed off so people could not leave to avoid voting.

Russia maintains that the referendums offer an opportunity for people in the region to express their view.

‘From the very start of the operation…, we said that the peoples of the respective territories should decide their fate, and the whole current situation confirms that they want to be masters of their fate,’ Russian Foreign Minister Sergei Lavrov said this week.

Ukraine says it will never accept Russian control of any of its territory and will fight until the last Russian soldier is ejected.

Residents of the Ukrainian capital Kyiv, from which Russian forces were repelled by strong resistance in March, were dismissive of the referendums. 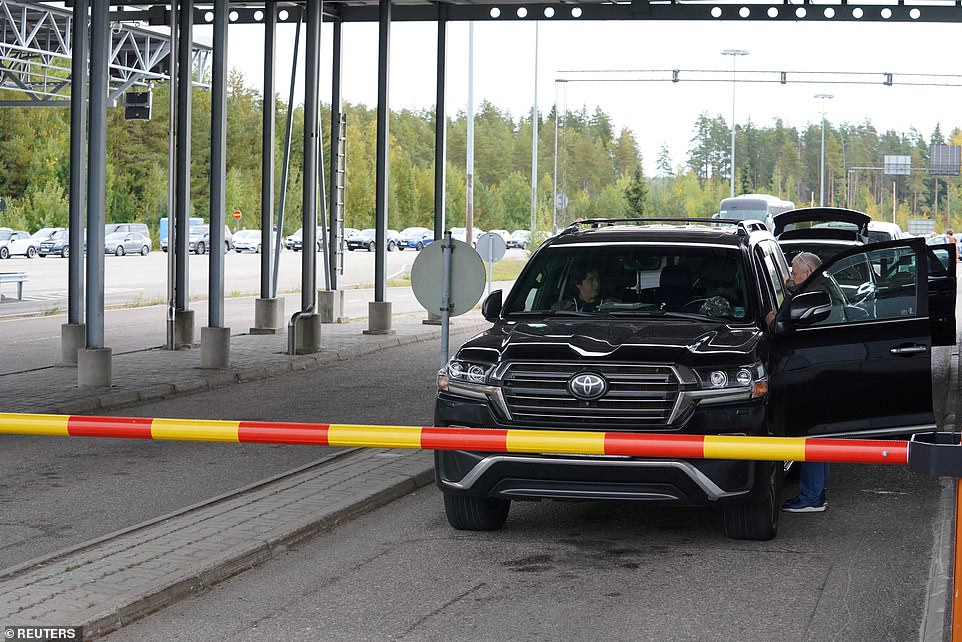 Russians queue at the border with Finland as they flee the country to escape the war with Ukraine, after Putin began mobilisation into the armed forces 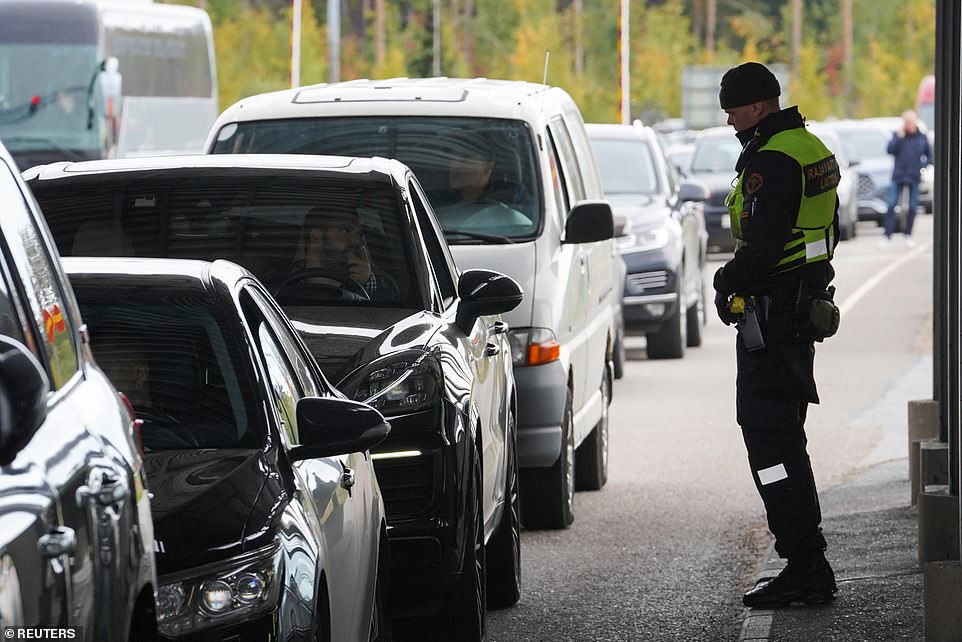 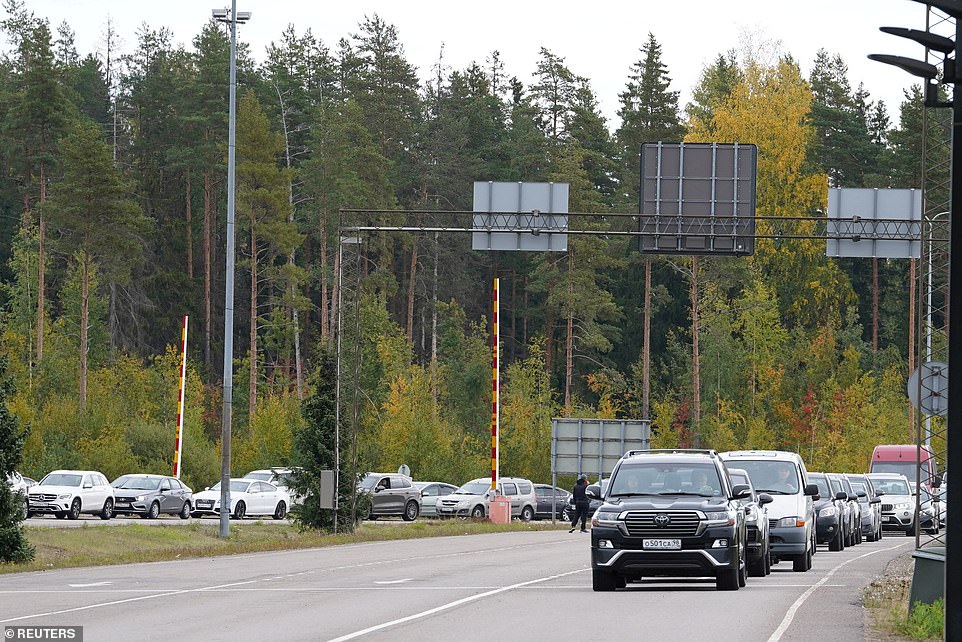 Cars queue to enter Finland from Russia at Finland’s most southern crossing point Vaalimaa, around three hour drive from the city of Saint Petersburg

‘(They) will give Moscow no upper hand. It’s all nonsense, bluff, and political manipulation to frighten us and the Western countries with their nuclear stuff,’ 65-year-old Oleksandr Yaroshenko told Reuters.

Voting for residents who have fled occupied territories was also being held at some 20 polling stations in Moscow, including the embassy of the self-proclaimed Donetsk People’s Republic, a Russian lawmaker said.

Russian-installed authorities in Kherson said all permanent residents of Russian-controlled regions who are currently in Russia would be able to vote in the town where they are staying, on presentation of relevant documentation.

Ukraine says Russia intends to frame the referendum results as a sign of popular support, and then use them as a pretext for annexation, similar to its takeover of Ukraine’s Crimea in 2014, which the international community has not recognised.

Hinting at the Kremlin’s strategic calculation in staging the referendums, ex-president Dmitry Medvedev, now deputy head of its national security council, warned Moscow would henceforth deem any attack on the four territories as one on Russia itself.

‘Encroachment onto Russian territory is a crime which allows you to use all the forces of selfâdefence,’ Medvedev said in a Telegram post on Thursday, adding that any weapons in Moscow’s arsenal, including strategic nuclear weapons, could be used.

The plebiscites have been denounced as an illegal farce by world leaders including U.S. President Joe Biden, U.N. Secretary-General Antonio Guterres and French President Emmanuel Macron, as well as NATO, the European Union and the OSCE.

Russia already considers Luhansk and Donetsk, which together make up the Donbas region Moscow-backed proxies partially occupied in 2014, to be independent states.

‘Voting has started in the referendum on Zaporizhzhia region becoming a part of Russia as a constituent entity of the Russian Federation! We are coming home!’ said Vladimir Rogov, an official in the Russian-backed administration of that southern region of Ukraine.

Despite the plan to mobilise reservists, Putin maintains Russia is only carrying out a ‘special military operation’ to demilitarise Ukraine, rid it of dangerous nationalists and defend Russia from NATO.

Kyiv and the West call Russia’s actions an unprovoked, imperialist bid to reconquer a country that shook off Russian domination with the 1991 break-up of the Soviet Union.