A teenage girl has been seriously injured and dozens of others have been taken to hospital after a truck and a school bus collided northwest of Melbourne.

The students were heading to Melbourne Airport for a space camp in the United States when the bus rolled on the Western Highway at Bacchus Marsh about 3.15am on Wednesday. 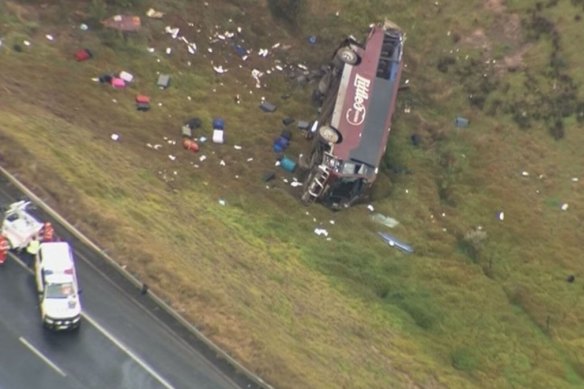 Thirty-three people, including 27 schoolgirls, have been taken to hospital after a school bus collided with a truck north-west of Melbourne. The crash took place on the Western Highway at Bacchus Marsh at about 3.15am.Credit:Nine News

Paramedics treated more than 30 people at the scene, with 27 female students, four adults and the bus driver taken to hospital.

A teenage girl was flown to hospital with serious lower body injuries, while most other passengers had minor injuries, Ambulance Victoria said.

“The truck has come around the corner and headed down towards the hill, it’s seen the speed reduction [from the earlier crash] and the banked up traffic and collided with the bus, forcing the bus off the left-hand side of the freeway down the cliff,” Schranz said. 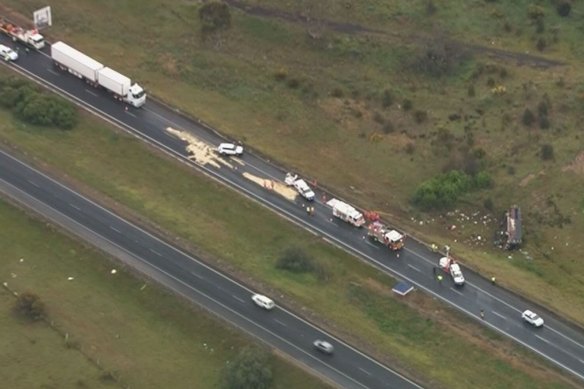 One teenage girl was flown to hospital in a serious condition with lower body injuries.Credit:Nine News

The bus rolled over in a ditch and the front of the truck was considerably damaged, he said.

“It’s destroyed the front cab and you can barely get into it,” he said.

The truck driver has yet to speak to police, the officer confirmed.

A family member said the girls were on their way to the airport to fly to the United States for a space camp.

“It was a trip of a lifetime,” a grandmother of one of the students told Sydney radio station 2GB.

Her daughter called to say her granddaughter was alright, the woman said.

Family members were directed to contact Ballarat Police station and not attend the scene.

Anyone with information or footage of the crash has been urged to contact police on 1800 333 000.