Talk dirty to me! RUBBISH BINS groan in pleasure and make sexually suggestive comments when trash is inserted in new Swedish initiative

Rubbish bins in Sweden have started groaning in pleasure and making sexually suggestive comments when trash is inserted as part of a new initiative to prevent littering.

Footage shows the bins saying ‘thank you’, ‘aaah that was crazy nice’, ‘oh, right there, yes’ and ‘mmm more’, seductively in Swedish as the opening is swung back and forth.

Eighteen high-tech bins were installed in Malmö in 2017, with two able to talk. During the pandemic, the bins thanked residents for steering clear. This is the first time they have had a sexy voice.

City authorities have added both a female and male voice to the bins so depositors have a chance of hearing a seductive comment after throwing away their trash.

Marie Persson, section chief of the city’s roads departments, said: ‘The sentences are part of the campaign’s intention to get more people to talk about the dirtiest thing there is: littering.

‘The stuff that ends up in our streets, squares, and seas, so please go ahead and feed the bins with more rubbish… yes, just like that.’

She told Sydsvenskan the idea of the sexy voice was a ‘new, humorous way to get across our message’ and was meant to give ‘a positive reinforcement to people who do the right thing, by giving them a laugh.’ 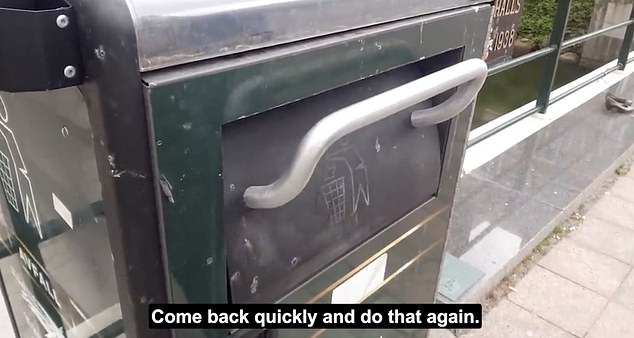 Footage shows the bins saying ‘thank you’, ‘aaah that was crazy nice’, ‘oh, right there, yes’ and ‘mmm more’, seductively in Swedish as the opening is swung back and forth

Persson declined to reveal who voiced the male bin but said it was a ‘famous person’ who is ‘from Skåne.’

Swedish rapper Joy revealed that she was the female voice on Instagram.

She wrote: ‘Congrats to everyone living in Malmö, now you can hear me groan while you look after the environment.’