Teenager killed in fairground horror is pictured: Loved ones leave tributes at travelling funfair where boy, 14, ‘fell to his death from top of ride after sneaking into site with friends’ 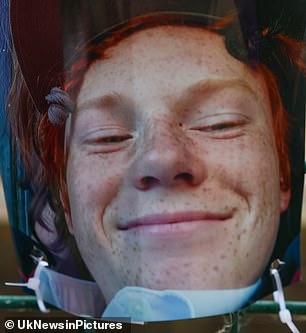 Pictured: Mackenzie Croxford-Cook, 14, who plunged to his death from a fairground ride

The 14-year-old boy who plunged to his death from a fairground ride after ‘sneaking into site with five friends’ has been named locally as Mackenzie Croxford-Cook.

Family and loved ones have given tributes to the teenager and flowers, balloons, candles and pictures have been placed outside the fun fair in Dover, Kent.

Friends of the teenager were today seen arranging a tribute at a bus shelter in a car park next to Pencester Gardens, the park where the travelling fair was being held. 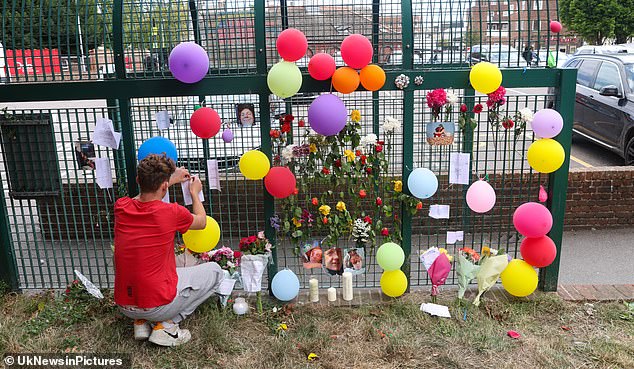 Family and loved ones have today given tributes to the teenager and flowers, balloons, candles and pictures have been placed outside the fun fair in Dover, Kent

They attached balloons to the shelter, and several bunches of flowers were also laid out along the floor along with photographs of Mackenzie with his family, KentOnline reports.

Locals said they had heard a group of around six youngsters had climbed over fencing on the perimeter to get into the fair in Dover, Kent before it was due to open yesterday morning.

It has been said he lost his footing after climbing the ride ‘Body Count’ despite his friends pleading for him to get down.

Emergency crews were called to Family Funfair in a park in Dover, Kent around 7.45am yesterday morning, August 3. 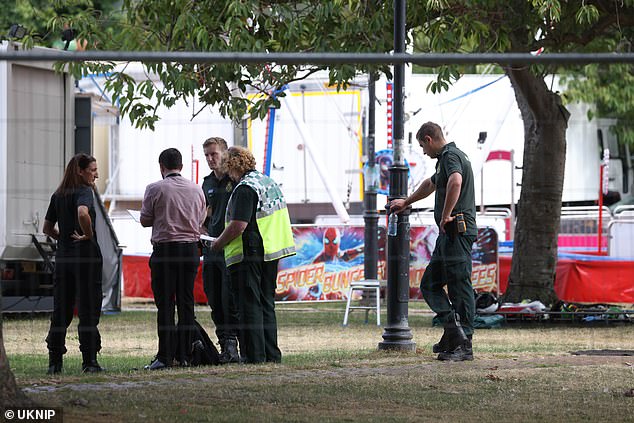 Emergency services were called shortly after 7.45am following the death of a teenager who was crushed by a fairground ride 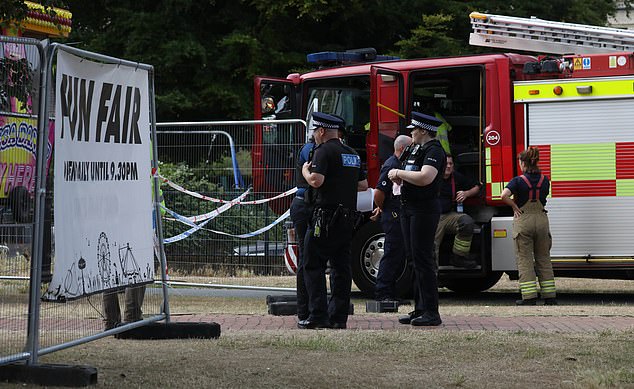 Catherine Dennison, 75, a retired P&O ferry worker who lives close to the park said she heard an ‘unusual’ number of sirens this morning.

She came out her house to see what was going on and saw a fleet of emergency vehicles near the park.

She said: ‘I spoke to a young boy who said he had watched it happen.

‘He said a boy was climbing up on the frame of a ride and his friends were telling him to get down, but he didn’t listen and then the boy lost his footing.

Catherine, who had worked on the ferries as an interpreter added: ‘It’s so awful. I feel so sorry for his mother, and his father, and his friends who saw it.’

The ride where the tragedy took place is thought to be called Body Count, according to residents.

Sarah Rogers, 51, who lives nearby said: ‘The kids climbed over the fence into the funfair and then the boy was on the ride called Body Count.

‘He went up to the top of it and fell off apparently.

‘He fell off the ride. It’s absolutely terrible.’

Laura Haley, 42, who has lived nearby for eight years said: ‘It’s so sad and shocking.’ 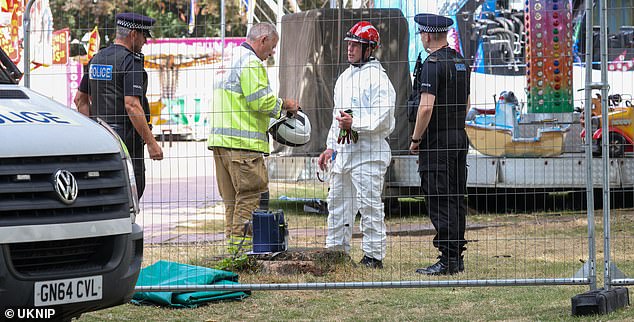 A crime scene was established, and the Pencester Garden Fair was placed under lockdown

Forrest Amusements, which run the fair, said yesterday: ‘We are deeply shocked and saddened to hear about the tragic incident which occurred this morning at one of our funfair events in Pencaster Gardens, Dover.

‘Kent Police have confirmed that the death is not being treated as suspicious and a report will be prepared for the coroner.

‘The Health and Safety Executive has attended the scene along with the emergency services.’

The amusement park company added that they closed the fair yesterday and today ‘out of respect for the boy’s family’.

They said that while their rides were ‘not at fault’ they have closed the ride involved in the incident out of respect and will not reopen it.

‘Our thoughts and sympathy are with the boy’s family at this terrible time,’ a spokesperson said.

They added that they wanted to thank the public for their understanding while the fair is closed and said safety and well-being of the public was their ‘first priority’.

The industry body extended its sympathies to the family of the person involved.

President of The Showmen’s Guild, John Thurston, said yesterday: ‘The Showmen’s Guild is aware of an incident that has occurred at Dover, in Kent, where we understand that a person has lost their life, in the early hours of Wednesday, August 3 when the fair was closed prior to its official opening.

‘The HSE, as the body that oversees the regulation of safety at funfairs, is currently investigating the circumstances that led to this tragic event.

‘Our thoughts are with the family of the person involved.

‘As the investigation is currently taking place, we are unable to comment further at this time.’ 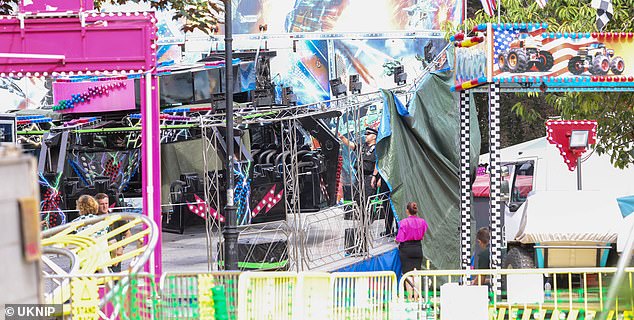 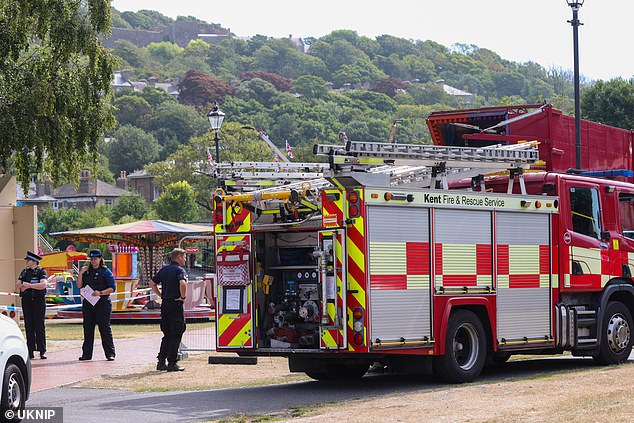 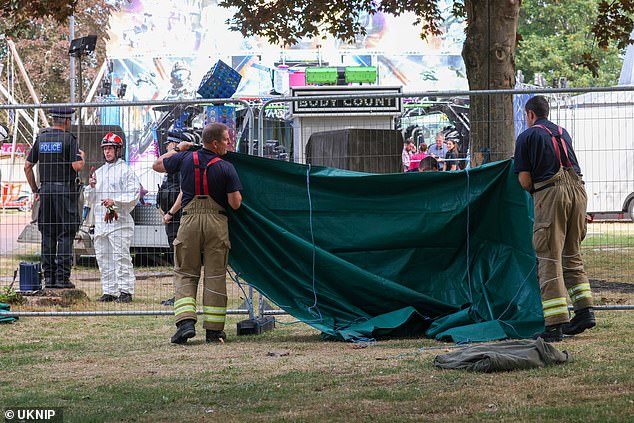 A Dover District Council spokesman said yesterday: ‘We are deeply shocked and saddened to hear about the tragic incident early this morning (Wednesday, August 3) in Pencester Gardens in Dover.

‘Our heartfelt condolences go out to the family and friends of the teenage boy involved.

‘The incident occurred at a funfair operated by Forrest Amusements, but the fair was shut at the time.

‘Kent Police has confirmed that the death is not being treated as suspicious and a report will be prepared for the coroner. The Health and Safety Executive attended the scene along with the emergency services.’

The South East Coast Ambulance Service confirmed yesterday morning that a teenage boy was found deceased at the scene.

A spokesperson said: ‘We were called at 7.42am this morning to a serious incident at Pencester Gardens in Dover.

‘We immediately dispatched a number of clinical resources to the scene, including our HART team and Critical Care Paramedics, however, sadly, a teenage boy was pronounced as deceased at the scene.’

A road adjacent to the park was initially closed to traffic but has since been reopened.

A Kent Police spokesperson confirmed the force attended the incident but said no suspicious circumstances have been reported.

The Health and Safety Executive has been informed.

A Kent Fire and Rescue spokeswoman also confirmed earlier today the service had been called to the scene to assist police.

‘It’s like they’re taking over’: Residents wrangle with students over patch of green in Albert Park

Perfect antidote to macho No10… a woman prime minister | The Sun