The challenges waiting in Rishi Sunak’s in-tray: New PM will likely have to cut public spending AND could raise taxes

Rishi Sunak faces a daunting task as Prime Minister and is expected to reign back Liz Truss’s unfunded tax cuts and spending commitments.

These are the main issues he will after moving in to Downing Street tomorrow.

Liz Truss’s downfall as PM stemmed from her mini-Budget disaster when her announcement of £45billion in unfunded tax cuts prompted meltdown on the financial markets.

The price of Government borrowing has soared in recent weeks and the Treasury is scrambling to deal with a huge blackhole in the nation’s finances.

Mr Sunak is likely to have to oversee severe public spending cuts and, perhaps, even tax rises in order to balance the books. 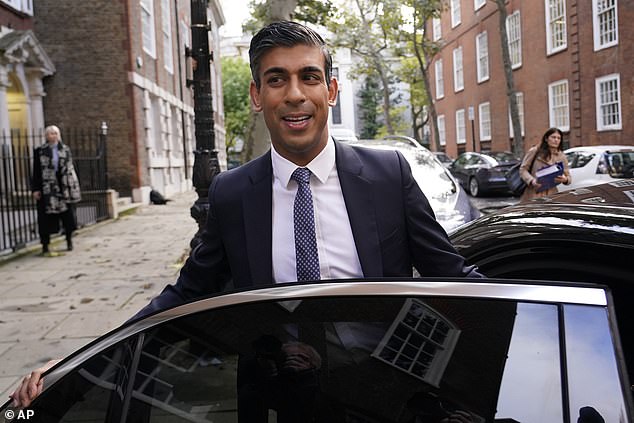 He will also have to deal with the continuing cost-of-living crisis, exacerbated by Russia’s invasion of Ukraine, and the harmful impact of runaway inflation.

As soon as she entered No10, Ms Truss promised that energy bills for typical households would be frozen at £2,500 a year until 2024.

But, after her mini-Budget spectacularly unravelled, she was forced to pull apart that promise with the bills bailout now due to end in April.

From that point onwards, financial help is only set to be made available to those most in need.

Will Mr Sunak continue to limit help from April? Or will he give the policy yet another rethink in order to prevent millions of Britons being slapped with huge increases in their bills next Spring?

He will also have to decide whether to increase both pensions and benefits by the rate of inflation, or at a lower level.

A ‘WINTER OF DISCONTENT’

There are fears that disputes between militant trade unions and employers could worsen further as the cost-of-living crisis continues to bite.

Britons have already been forced to endure a series of nationwide rail strikes in recent months, while Royal Mail workers, barristers, port workers and BT staff have also staged walkouts.

Teachers are set to be balloted on industrial action, with one union having pencilled in strikes from January.

And the Royal College of Nursing is also threatening a walkout in a dispute over pay.

Will Mr Sunak pursue a hardline stance on public sector wages at a time of spending restraint? Or will he not want to risk public anger over weeks’ or months’ worth of disruption? 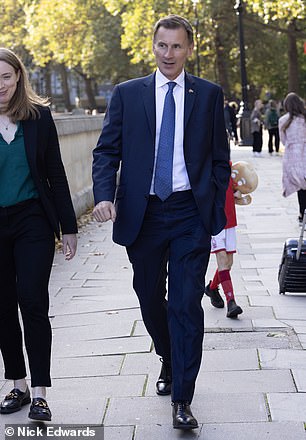 Jeremy Hunt is expected to remain as Chancellor

The most severe threat to global security remains Russia’s invasion of Ukraine, with Vladimir Putin continuing his brutal assault on his country’s neighbour.

There are fears the Russian President’s barbarism could escalate further if the conflict continues to go against him and his desperation increases.

Mr Sunak will be under pressure to continue Britain’s staunch support for Kyiv, while also keeping in mind how he would react should Mr Putin decide on more drastic action.

He will also face continued demands from Tory MPs to boost defence spending, having refused to commit to a target of raising it to three per cent of GDP.

Relations between Britain and China have deteriorated further after a Hong Kong pro-democracy protester was dragged into the Chinese consulate grounds in Manchester and beaten up.

With an ever-growing number of Sino-sceptics among Tory MPs, how Mr Sunak deals with Beijing is set to be an important test of his premiership.

Mr Sunak has committed to continuing the Government’s bid to send migrants who enter the UK illegally to Rwanda.

The £120million scheme has still yet to get going, amid a series of legal challenges, despite it being announced back in April.

Former Home Secretary Priti Patel unveiled the plans as a means of clamping down on the number of migrants making perilous journeys to Britain across the Channel.

Mr Sunak will have to decide how he will push forward with the scheme, including possibly overhauling Britain’s relationship with the European Convention on Human Rights.

And, if the scheme continues to stall, the PM will have decide on what further action to take to try to stem the number of migrants arriving in small boats.

New elections are due in Northern Ireland if there is no return to a power-sharing government at Stormont before Friday.

The DUP is currently blocking the functioning of Stormont institutions as part of their protest against post-Brexit trading arrangements, known as the Northern Ireland Protocol.

But the party is under pressure to end their boycott of Stormont while resumed talks between the UK Government and the EU over the Protocol continue.

Mr Sunak will hope that increased posititivity around the state of those negotiations with Brussels will soon lead to a breakthrough in the Protocol row.

This should then, hopefully, allow power-sharing to resume in Northern Ireland ahead of the 25th anniversary of the Good Friday Agreement next year.

US President Joe Biden is said to be planning a trip to the UK and Ireland to coincide with the anniversary.

After two divisive leadership elections this year and months of bitter infighting between MPs, Mr Sunak faces a huge task in trying to unite the Conservative Party behind him.

If he fails to do so, it is not impossible that the Tories could seek to junk yet another leader before the next general election.

When he abandoned his sensational comeback bid last night, Boris Johnson raised the possibility that he could still chase a return to No10 at another date.

‘I believe I am well placed to deliver a Conservative victory in 2024,’ the ex-PM said.

Mr Sunak faces an immediate question over how to handle Mr Johnson, who obviously believes his career in frontline politics is not over.

The new PM hinted at a possible foreign diplomacy job for Mr Johnson, saying last night: ‘I truly hope he continues to contribute to public life at home and abroad.’

The Tories are currently staring at political oblivion on the basis of current opinion polls, which have given Labour huge leads amid the chaos of Ms Truss’s premiership.

Can Mr Sunak turn the Tories’ fortunes around, even as he faces all the numerous challenges listed above?

Family of girl, 10, reveal rare cancer has returned for a THIRD time as they need £400,000 for treatment