Melbourne’s CBD sprang back to life on Wednesday, after the lifting of the tough stage four lockdown, with foot traffic through some city streets back to 80 per cent of pre-COVID levels.

Shoppers flocked back to suburban retail centres and some restaurants were already booked out for weeks to come, according to the Council of Small Business of Australia which expressed optimism for business prospects in the coming months. 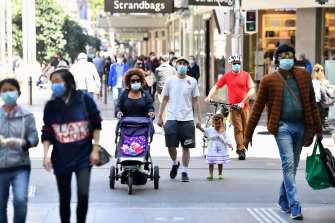 Shoppers returned to the streets of Melbourne on Wednesday.Credit:Joe Armao

"You’ve only got to drive around Melbourne today, the place is packed, shopping centres are packed,” said the council's director and deputy chair David Gandolfo.

But one of Victoria’s leading economists urged caution, saying the uncertainty around the prospects for both the state and national economies was unprecedented, despite the cautiously upbeat assessment this week from the Reserve Bank of Australia.

Uncertainty also continued to surround the biggest date on Victoria’s economic calendar – the state budget – with Premier Daniel Andrews declining to say when it would be delivered.

But Mr Andrews said on Wednesday that the government, which has secured a $24 billion line of credit in response to the crisis and says it is prepared to embark on an unprecedented spending program, will announce the date for the budget when it is ready.

The Age was unable to obtain any real-time figures on consumer spending for Melbourne’s first day of freedom but data on pedestrian movements in the CBD on Wednesday points to better times ahead for city retailers, after months of keeping their doors shut.

At lunchtime on Wednesday, 1916 people were logged walking through Bourke Street Mall, almost five times more than the average foot traffic at that time over the past month, with above average foot traffic also recorded outside Flinders Street and Southern Cross stations, at Melbourne Central and on Lygon Street.

Mr Gandolfo said it was too early to say how quickly the "real economy" might bounce back and start to have an impact on Victoria’s soaring jobless levels.

But he said that many small firms, particularly in the building and construction sectors, would be able to pick up where they left off when the pandemic and lockdowns struck. Things were also looking positive for retail and hospitality outlets which had managed to survive the long shuttering, he said. 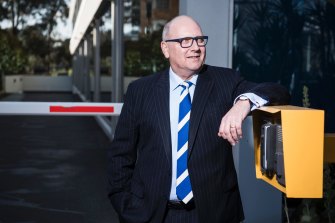 Mr Ganodlfo, who works as a business lending consultant, said the conditions for businesses seeking loans were reasonably buoyant in stark contrast to the 1990s recession.

“It’s not like the early '90s when there was no money around, there is plenty of money around, capital markets have money, interest rates are low," Mr Gandolfo said.

“We’ve got clients who have are loading up with approvals for acquiring assets to grow their businesses because its been like they’ve been waiting for the green light to go.

“The lenders are a little bit cautious apart from the first-tier banks, but there are certainly good second-tier lenders out there, who’ve got a good appetite to lend.” 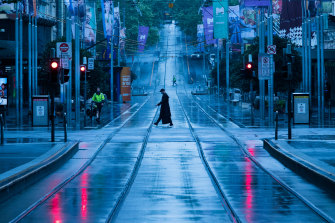 Two weeks ago the Bourke Street mall was deserted.Credit:Jason South

"Online retail sales increased threefold during lockdown and online stores have had an enormous number of consumers come through who had never tried purchasing online, who are now doing it very regularly," he said.

He said it was hard to say when Victoria's economy would rebound, but expected consumer spending to return to something similar to pre-COVID levels in November.

He said the reopening would be a boost for employment statewide, but that the gains would be seen in hours worked among staff who were temporarily stood down during the lockdown rather than new jobs being created.

New Zealand is the second most peaceful country in the world, according to data