Singapore: As Nancy Pelosi prepared to board her plane to leave Taiwan on Wednesday night, Chinese state media was working overtime to justify all the fuss.

“The Chinese people are infuriated by US House Speaker Nancy Pelosi’s visit to the Taiwan Island,” thundered China Daily as Pelosi took off. “But are generally optimistic and confident in China’s ability to handle the situation and thwart any secession efforts by Taiwan separatist forces and foreign interference.” 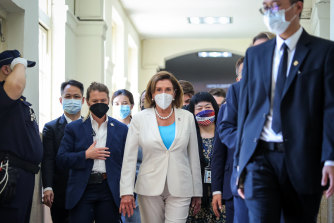 US House Speaker Nancy Pelosi in Taipei on Wednesday. Credit:Getty

The first sentence tells us of the scale of mainland outrage – manufactured or otherwise – at Pelosi’s 18-hour trip to Taipei, which ended with Taiwanese exports being sanctioned and 27 Chinese warplanes crossing Taiwan’s median line. The second tells us how despite the threats of Taiwan being sent into the abyss by the People’s Liberation Army, the uneasy peace between Beijing and Taipei may just hold.

“Most people are cautiously optimistic,” says Wen-Ti Sung, an Australian National University political scientist based in Taipei. “They have seen this movie before.”

The tell is in Beijing’s emphasis on “Taiwan separatist forces”. The term is a favourite of Chinese government-controlled media, ministers and their departments because it allows China to create an enemy it can use to drive nationalist sentiment at home. It was repeated at least 20 times in Chinese government announcements condemning Pelosi’s visit.

But the reality is that the government of Tsai Ing-wen has no intention of declaring formal independence from the mainland and therefore no plans to secede. Doing so would require Taiwan to relinquish its own claim to China, which it established after the two areas split in 1949 following the Chinese civil war.

“It is a very convenient United Front strategy. You blame a small, tiny often undefined minority,” says Sung, referring to the Chinese Communist Party’s overseas influence unit. “That way they can project threats without completely alienating everyone.”

Popular support for formal independence has fallen in Taiwan from 54 per cent in 2020 to 46.6 per cent in 2021, according to the Taiwanese Public Opinion Foundation, and despite some political support a decade ago, a much more aggressive and more powerful China has meant no mainstream Taiwanese politician is advocating for a referendum that could start a nuclear war.

Instead, Taiwan will continue to exist in this foreign affairs halfway house, self-governed, but with limited capacity to engage internationally as a separate state, otherwise known as the “status quo”.

They are two words that often mean very little. For Taiwan, they are existential.

“Taiwan is committed to maintaining the status quo across the Taiwan Strait,” Tsai emphasised after her meeting with Pelosi.

Pelosi made it clear the US also “opposed unilateral efforts to change the status quo”. Australia’s Defence Minister Richard Marles followed with the same message.

If the status quo can be maintained, it might hold off the prospect of war for decades. But it is a delicate balancing act. This week showed how perilous the high wire could become as China pulled one side with its patriotic zeal, while Pelosi pulled the other with her visit to Taipei.

Observers hope careful rhetoric can keep the wire steady for now, but risks loom on the horizon. Pelosi’s visit gave China the excuse to practise what would otherwise have been an outrageously provocative act: a blockade of Taiwan. 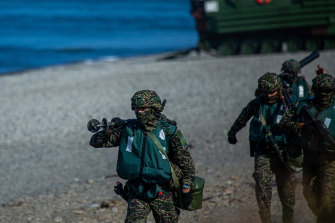 China on Thursday launched sea assault and air combat training in six areas less than 50 kilometres from Taiwan’s coast. The People’s Liberation Army said it had begun using J-20 stealth fighter jets and DF-17 hypersonic missiles. Taipei said it was forced to fire flares at drones that had flown above Taiwan’s Kinmen islands to drive them away.

The encirclement of Taiwan through live-fire exercises for the next four days looks ominous, but it is as much about playing to a nationalistic domestic audience after revving them up for weeks, as it is about avoiding an actual military confrontation.

“Thursday is Valentine’s Day in China,” says Sung. “They are showing Taiwan a bit of tough love.”

“I think we should be interpreting the purpose of China’s military drills as an exercise in diplomatic messaging, more than a preparation for the next phase of the conflict.”

“What they’re doing now is to show the Chinese national audience, ‘I have the ability to use the military. I am going to show you this very visually’,” says Sung.

But that does not mean Beijing necessarily wants to go any further.

“China is saying well, ‘I’m a superpower, I’m going to do things on my own timeline at my own pace,” says Sung. “I’m not going to dance to the tune of some soon-to-retire 80-something-year-old or the so-called fragment of Taiwan separatist forces who are bound for the dustbin of history’.”

In the maps of the planned exercises released by the People’s Liberation Army there is a small overlap with Taiwan’s international and territorial waters. They will take place only a few kilometres from islands that surround Taiwan, just close enough to let Taiwan know that its territory has been violated.

“I think that the plan is there to cancel the effect of Nancy Pelosi’s visit,” says Sung.

“Because if you use China’s Wolf Warrior logic, they think the Pelosi visit has some kind of legitimising effect that elevates Taiwan’s claim to be a state actor. What do state actors have, they have sovereignty and claim to territorial waters.”

By starting the military exercises on Thursday, China is effectively blocking maritime traffic in key parts of the Taiwan Strait, one of the world’s busiest shipping lanes and breaching Taiwan’s territorial sovereignty.

“So China is now trying to say, if you don’t object and respond robustly, then essentially, I’m proving that Taiwan is not a sovereign actor,” says Sung.

For now, that high-stakes operation means the status quo is maintained.

They stole my bank card and phone from my locker