‘Still out there every day looking for those WMDs’: Tony Blair’s left-to-right glimpse at accession council ceremony sparks jokes on Twitter

Tony Blair has been mocked online after a video from yesterday’s Accession Council ceremony showed him looking round the room with a bemused look on his face.

The former Prime Minister and Labour Party leader, who is one of 718 Privy Councillors, was in attendance at the ceremony in St James’ Palace yesterday where Charles was formally proclaimed King.

And his strange facial expressions at the ceremony have generated lots of memes, with some people suggesting he is desperately looking around for friends and others joking that he is searching the room for weapons of mass destruction.

One person Tweeted: ‘Gets a lot of stick but he’s still out there every day looking for those WMDs.’

Mr Blair famously sent British troops to Iraq in 2003 based on a conviction that the country’s president Saddam Hussein had weapons of mass destruction, despite the fact that intelligence reports had not established ‘beyond doubt’ that they existed. 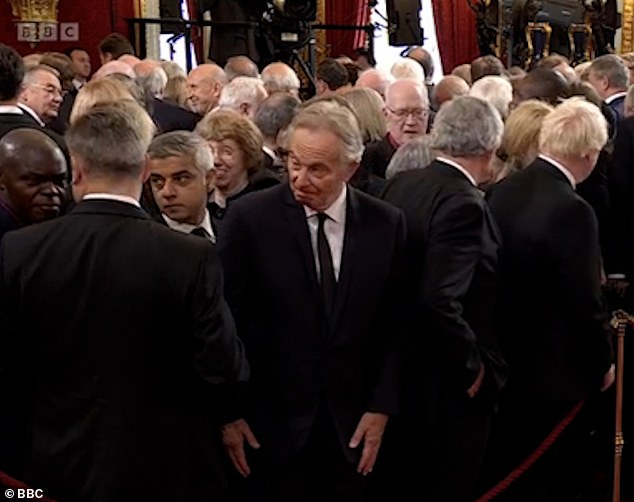 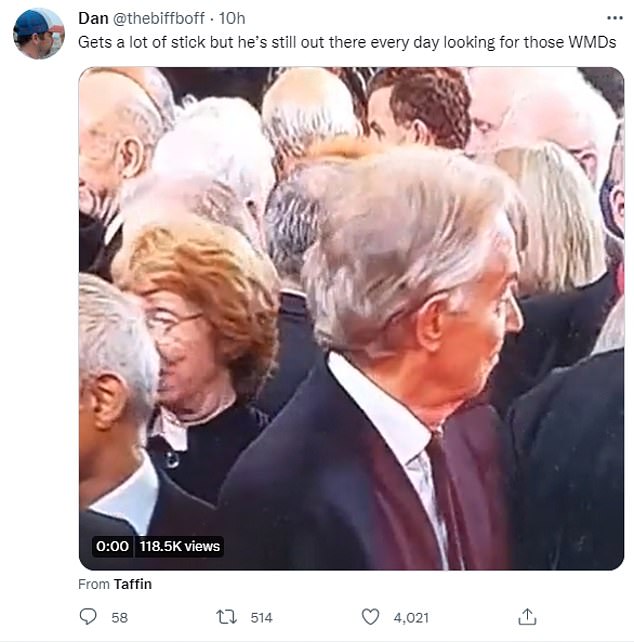 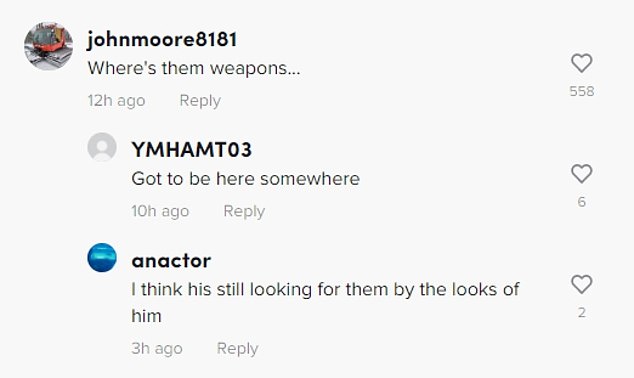 Another social media user commented ‘Where’s them weapons…’ to which people responded ‘Got to be here somewhere’ and ‘I think he’s still looking for them by the looks of him’.

Others joked that he was desperately scouring the room for a friend to talk to, with one commenter sympathising saying: ‘Me at every social event ever.’

Twitter user Lloyd Vaughan suggested he was inspecting the room inside the most senior royal palace in the United Kingdom, drawing comparisons to renovation show Homes Under The Hammer. 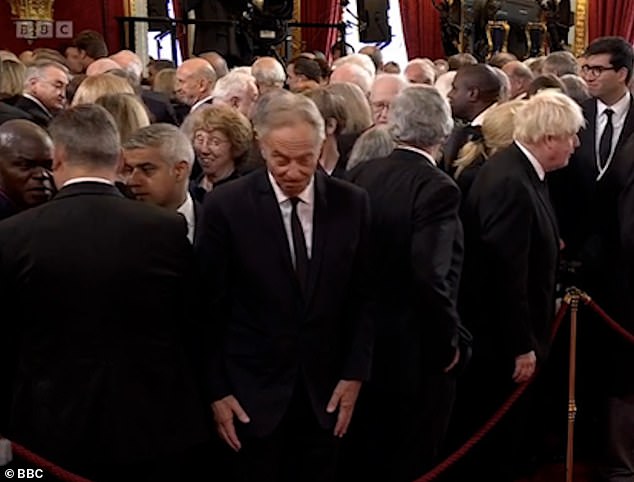 Others made fun of Mr Blair’s apparent awkwardness, suggesting he was desperately searching the room for people to talk to

But Mr Blair was not the only former Prime Minister who was made into a meme after yesterday’s event, which was televised for the first time in history.

Jokes were also made about former Conservative leader David Cameron’s animated gesticulations to colleague Theresa May.

One person captioned the photo: ‘So I just grabbed the pig’s head by the ears and…’ in reference to the claim that, during his university years, David Cameron took part in an initiation ceremony with a dead pig’s head. 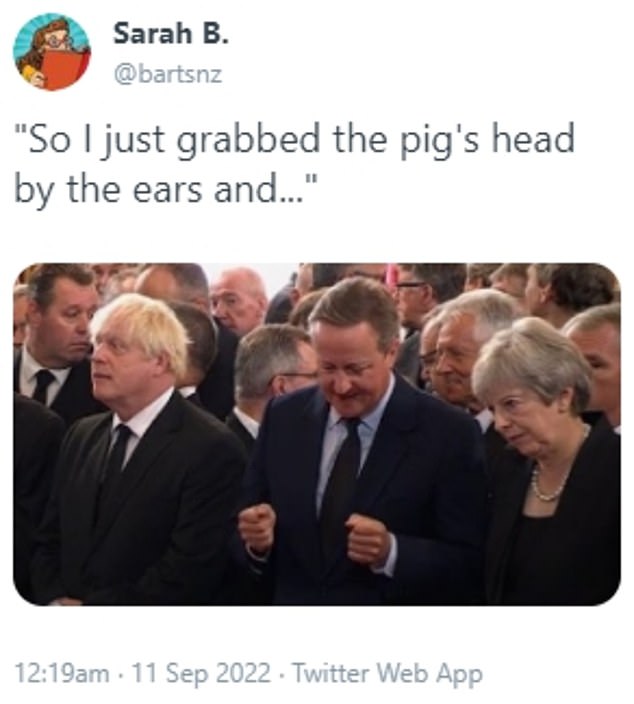 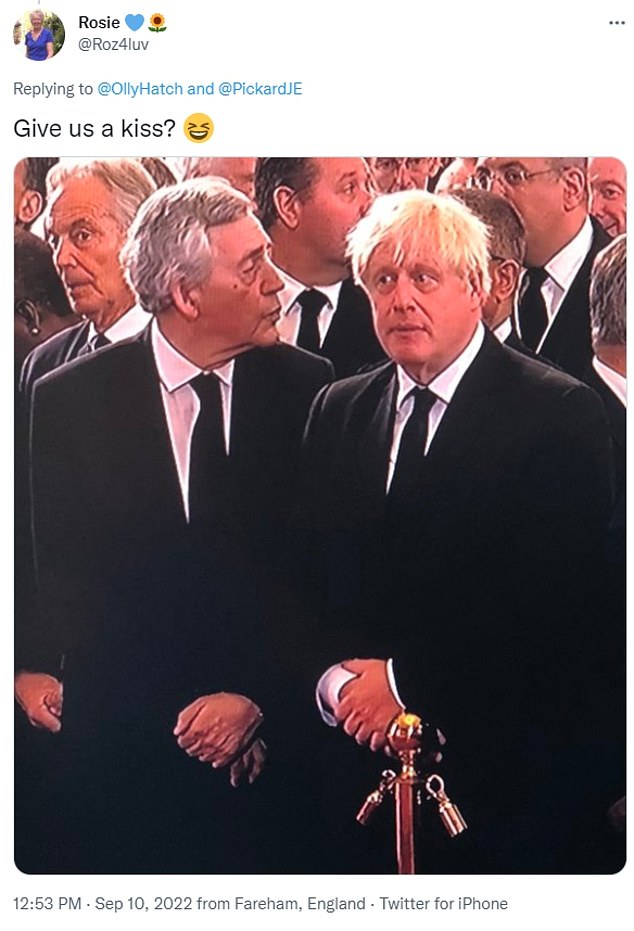 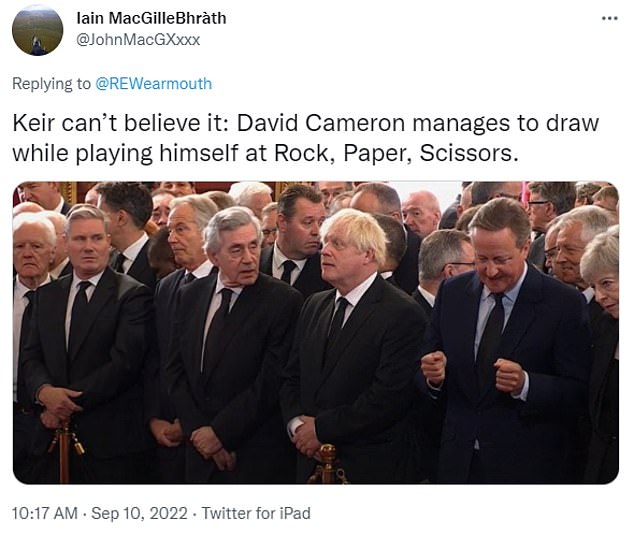 Mr Blair was not the only former Prime Minister who was made into a meme after yesterday’s event, which was televised for the first time in history

They were joined by former leader of the opposition Ed Miliband, who led the Labour Party from 2010 to 2015, and Neil Kinnock, who did the same between 1983 and 1992. Former Liberal Democrat leader Nick Clegg also joined the Council.

Members of The Royal Family and new Prime Minister Liz Truss were also in attendance, as was current Labour Party leader Keir Starmer.

The country’s political leaders, old and new, joined in chorus of ‘God Save The King’ to show their support for the new monarch. 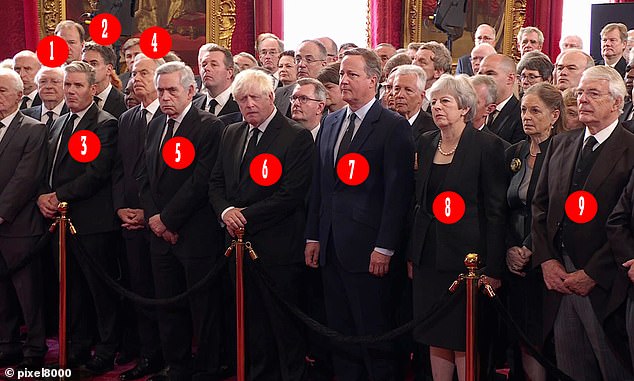 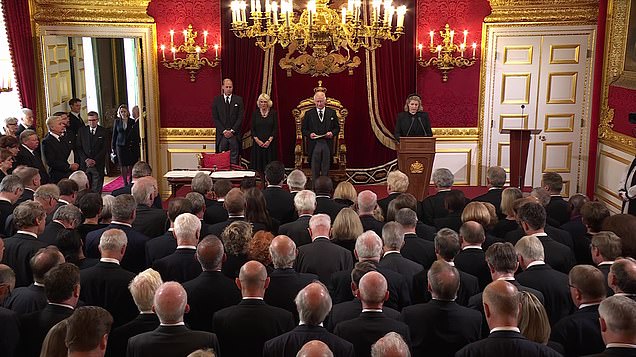 Former Labour Prime Minister Gordon Brown and Boris Johnson, who resigned as Prime Minister earlier this week, were seen chatting enthusiastically in the front row as they waited for the ceremony to begin.

One notable absence was Labour MP Jeremy Corbyn. The Mail on Sunday reported that the former party leader was invited to attend the ceremony but as a life-long republican decided not to turn up.

'The pandemic meant I had to reinvent my business'

Rudy Giuliani claims 'BLM will be proven a terror organization'