A senior Tory faced a backlash tonight after he claimed there was a ‘terrorist campaign’ to discredit the Commons investigation into Boris Johnson over Partygate.

Sir Bernard Jenkin said some Conservative MPs were seeking to undermine the inquiry into whether the Prime Minister misled Parliament over lockdown gatherings.

This week Culture Secretary Nadine Dorries called on Sir Bernard and other Tory MPs on the Commons privileges committee, which is carrying out the probe, to withdraw from the ‘witch-hunt’, labelling it a ‘Machiavellian process’. 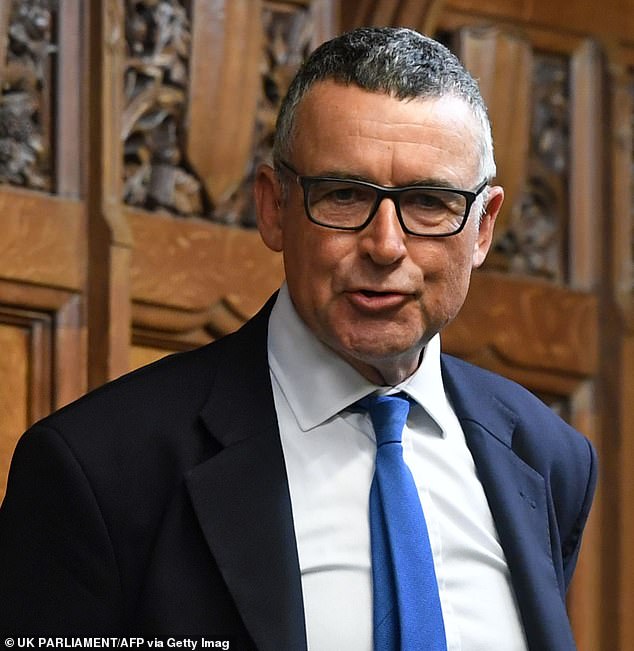 In an extraordinary outburst today, Sir Bernard called on critics of the process to ‘write to the committee’ if they have concerns and ‘not conduct a sort of terrorist campaign’ in the media.

Allies of the Prime Minister immediately hit back at him, saying ‘genuine criticism is not terrorism’.

The row came as Tory MPs labelled the probe into Mr Johnson a ‘stitch-up’, mounting further pressure on the privileges committee to call it off.

But the committee said the inquiry was voted for unanimously by MPs, and can be called off only if they hold another vote.

Constituents of Tory MPs on the ‘witch-hunt’ committee investigating Boris Johnson last night called on them to quit.

He said: ‘A large part of me thinks he’s gone and we should face up to the challenges of the country – the cost of living, the cost of fuel, fuel poverty and inflation.’ Fellow local Conservative Association member Peter Chillingworth said Sir Bernard would do a ‘fair job’ but was not ‘fully independent’.

Bill Liquorish, a councillor on Harborough District Council in Mr Costa’s South Leicestershire constituency, said people were ‘having so many digs at Boris’.

Asked if he thought his MP should remain on the committee, he said: ‘Not particularly, no, that’s not right.’  Today it emerged Tory MP Laura Farris had informally stepped down from the cross-party group.

In Mr Carter’s Warrington South constituency, mother of two Jackie Moore, 62, said: ‘They should leave him [Mr Johnson] alone. It just feels like a witch-hunt.’

The process was set in motion after police fined the Prime Minister for attending a birthday party in the Cabinet Room in June 2020. MPs voted to refer the issue to the privileges committee. If the seven-strong committee finds him in contempt, Mr Johnson could be suspended from Parliament – and even kicked out as an MP.

The process has come under fire, with critics labelling the committee a ‘kangaroo court’.

But today Sir Bernard told Radio 4’s The World At One: ‘If people want to criticise it, please write to the committee. Don’t just conduct a sort of terrorist campaign to discredit the committee.’

He said the committee could not respond to ‘what amounts to a publicity campaign designed to discredit the committee’, and added: ‘The Commons has charged us with this responsibility and we will carry out this inquiry for as long as the House wishes us to do so.’

In response, Tory MP Michael Fabricant said: ‘Genuine criticism is not terrorism. They’ve changed the rules so that even unintentionally misleading the House is now almost a hanging offence.’

Another Tory MP said: ‘MPs have an absolute right to comment on it.’

Asked at a Tory leadership hustings tonight whether the probe should continue, Liz Truss said: ‘That’s a matter for Parliament, but I personally don’t believe he misled Parliament.’ Pushed on whether she would vote to end it, she said: ‘Well, yes, but there isn’t a vote and it’s going ahead.’

But Rishi Sunak said: ‘The MPs who are on that panel will make the right decisions … It’s not a Government decision and there’s an important distinction.’

A spokesman for the privileges committee said: ‘It is a matter for MPs and the House as a whole as to whether or not they want to table a motion to cease the inquiry.’

Igor Vovkovinskiy, tallest man in US, dies in Minnesota