St Petersburg, Florida: A Florida man spotted carrying a lectern belonging to House Speaker Nancy Pelosi's office in a widely circulated photo during the Capitol assault has been released on $US25,000 bail ($32,000).

A federal magistrate judge in Tampa agreed to the release on Monday US time, at a brief hearing for Adam Johnson, 36, from the nearby community of Parrish.

Johnson was arrested on Friday night on charges of government property theft, violent entry and disorderly conduct on Capitol grounds and entering a restricted building without lawful authority, according to an arrest warrant. Some 90 arrests have been made in conjunction with the riots. 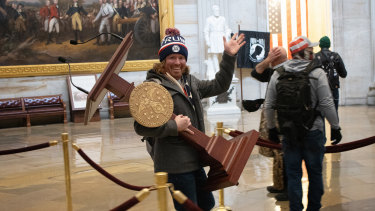 A pro-Trump protester identified as Adam Johnson carries the lectern of Speaker of the House Nancy Pelosi through the US Capitol Rotunda.Credit:Getty Images

Johnson has not yet entered a plea to the charges, which were filed in Washington. He has to surrender his passport, observe travel restrictions and adhere to a curfew of 9pm to 6am.

“This is a serious case,” Assistant US Attorney Patrick Scruggs said at the hearing, according to the Tampa Bay Times. “Everyone involved in the storming of the Capitol last week needs to be held accountable for their actions, including Mr Johnson.”

Johnson's lawyer did not immediately respond to an email seeking comment.

Authorities say Pelosi’s offices were among those breached by the mob objecting to the election victory of Democratic President-elect Joe Biden over Republican President Donald Trump. Five people died as a result of the violence.

The photo circulated around the world after Wednesday's uprising showed a grinning, waving man identified as Johnson carrying the lectern through the Capitol rotunda with the clearly visible words “Seal of the Speaker United States House of Representatives.” Johnson is wearing a knit cap that says “Trump” on it.

A second photo shows Johnson posing with a sign in the Capitol that says “closed to all tours.”

An FBI statement filed in federal court says Johnson was quickly identified by acquaintances through social media and that some people called in tips about his identity. Local media reports say Johnson is a stay-at-home dad who has five children with his wife, a physician.

The wooden lectern, valued at about $US1000, was later recovered undamaged in a hallway on the Senate side of the Capitol, according to the FBI.

Johnson has another court date January 19 in Washington, where his case will be prosecuted.

US power and politics

Understand the election result and its aftermath with expert analysis from US correspondent Matthew Knott. Sign up here.

‘Start Here’: ‘The Squad’ responds to Trump, Epstein back in court, a Vatican mystery

Magna Carta is back on show at Salisbury Cathedral