The Prime Minister and European Commission President met at the UN General Assembly for talks on Russia’s ongoing invasion of Ukraine.

In a joint statement after their meeting, the pair declared that Mr Putin’s order for a partial mobilisation to reinforce his troops in Ukraine was ‘a statement of weakness’.

They added the Russian President’s move was ‘a sign that Russia’s invasion is failing’.

And while Ms Truss and Ms von der Leyen underlined their ‘joint commitment’ to continued support for Ukraine – they appeared to skirt around rumbling Brexit tensions between Britain and the EU.

The bilateral meeting in New York was their first since Ms Truss replaced Boris Johnson as PM.

It came just hours after Mr Putin had used a Russian TV address to announce the mobilisation of reservists in a dramatic escalation of the Ukraine war. 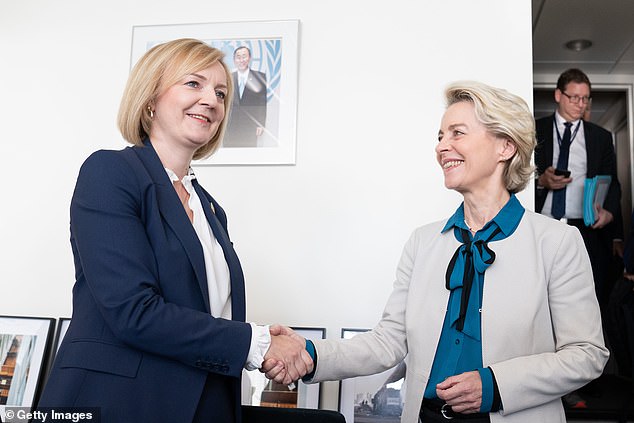 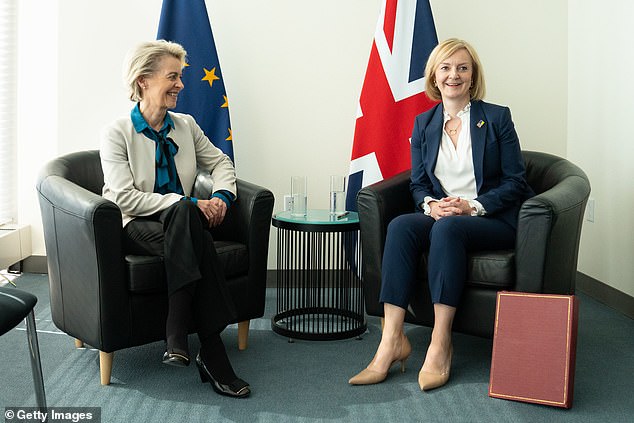 In the joint statement, Ms Truss and Ms von der Leyen were said to have ‘strongly condemned Russia’s actions in Ukraine and agreed that Putin’s recent calls to mobilise parts of the population were a sign that Russia’s invasion is failing’.

‘It is a statement of weakness,’ the statement added.

‘They recognised the courage and bravery of the Ukrainian people and underscored their joint commitment to sustaining support for Ukraine in its struggle as long as it takes.’

The decision to release a joint statement after the meeting – rather than both sides publishing their own accounts of the talks – is likely to reflect a desire from Ms Truss and Ms von der Leyen’s teams to maintain a united stance on Russia.

It also suggests they decided to sidestep a fresh bust-up over Brexit.

Both the UK and EU are still at loggerheads over the Northern Ireland Protocol, with Brussels having recently launched fresh legal action as part of the dispute.

It followed Ms Truss’s efforts to unilaterally override key parts of the Protocol through new laws at Westminster.

But, since becoming PM, Ms Truss has struck a more conciliatory tone towards Brussels.

She recently reiterated her preference is to find a negotiated settlement with the EU to the Protocol row, rather than take unilateral action.

Last week, European Commission vice-president Maros Sefcovic claimed border checks on goods moving from Great Britain to Northern Ireland – a major part of the Protocol dispute – could be reduced to a ‘couple of lorries a day’.

Downing Street did not publicly respond to Mr Sefcovic’s comments due to the period of national mourning following the Queen’s death.

The European Commission President nodded and smiled in response.