At least her feet are comfortable! Liz Truss is grilled over her own mortgage and 45p tax rate U-turn in awkward interview after turning up in TRAINERS

Liz Truss was grilled about her own mortgage and her 45p tax rate u-turn in an awkward exchange with Sky News presenter Beth Rigby today – after turning up to the interview in trainers.

Mortgage rates have risen by nearly a whole percentage point in the two weeks since Kwasi Kwarteng’s mini-Budget, figures have revealed.

This afternoon, in a sit-down during the Conservative Party conference in Birmingham, Ms Rigby asked the Prime Minister whether she herself had a mortgage, to which she replied, ‘I do’.

‘And do you have an issue about remortgaging?’ the journalist said. ‘Well I,’ Ms Truss said, while awkwardly laughing. ‘I, I mean I do have a mortgage, yes I do.’

‘The reason I’m asking you is lots of people are facing a spike in interest rates and if you have to remortgage on a variable rate you could be facing hundreds of pounds in additional costs,’ said Ms Rigby. ‘So I’m just asking you is this as Prime Minister something you’re personally having to think about as well.’

Ms Truss, dodging the question, said she realised people were worried about interest rates but they were decided by the Bank of England, not politicians. 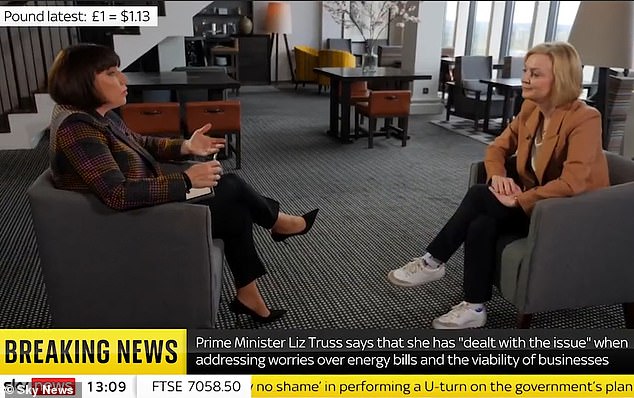 Today, in a sit-down during the Conservative Party conference in Birmingham, Beth Rigby asked the Prime Minister whether she herself had a mortgage, to which she replied, ‘I do’

Brokers have warned that homeowners face a second week of mayhem as lenders try to get to grips with market expectations of soaring interest rates.

The typical cost of a two-year fixed home loan has risen to 5.75 per cent, up from 4.74 per cent on September 23, the day of the Chancellor announcement.

This is more than double the 2.34 per cent average rate on offer last December, according to analysts at Moneyfacts.

Today’s Sky News interview got off to a combative start, with Ms Rigby outlining the chaos that had engulfed the Prime Minister’s first two weeks before asking, ‘This is surely the worst start of any Prime Minister.’

Quizzed on her decision to change her mind of cutting the top tax rate from 45p to 40p, Ms Truss said there was ‘absolutely no shame’ in a leader ‘listening to people’, adding: ‘What I did is I took the decision very rapidly on the 45p rate that it was becoming a distraction from the core policies we were delivering.

‘Core policies on the energy price guarantee, on keeping taxes low during the economic slow down, those were the priorities. Frankly the 45p wasn’t a priority policy and I listened to people.

‘I think there’s absolutely no shame, Beth, in a leader listening to people and responding and that’s the kind of person I am and I’ve been totally honest and upfront with people that everything I have done as Prime Minister is focused on helping people get through what is a very difficult winter and very difficult circumstances and putting our country on a stronger footing for the future.’

Ms Truss said a decision on benefits uprating would be made ‘in due course’. 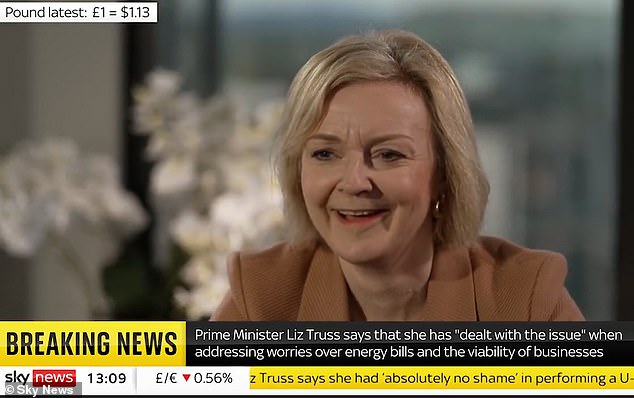 ‘And do you have an issue about remortgaging?’ the journalist said. ‘Well I,’ Ms Truss said, while awkwardly laughing. ‘I, I mean I do have a mortgage, yes I do’ 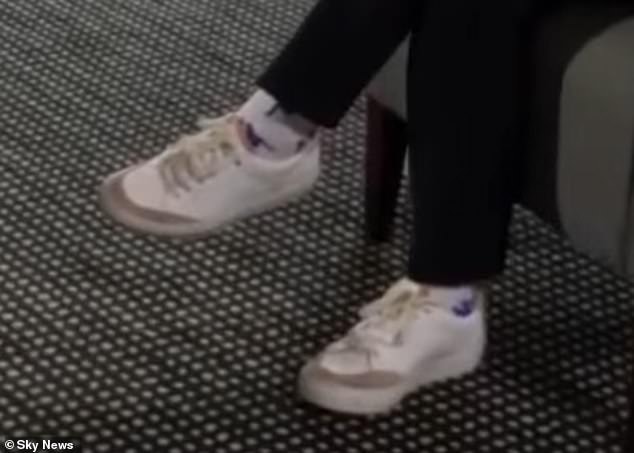 On uprating benefits in line with inflation, she told Sky News: ‘We haven’t made a decision on that issue yet…any announcement would be made to Parliament.’

She added: ‘Of course we will make the decision on the benefits uprating in due course but that decision has not yet been made.

Ms Truss also said the prospect of Ukraine joining Nato was not an ‘immediate issue’ or ‘on the table at the moment’.

She added: ‘What I have committed to is that Ukraine needs to have Nato-level equipment. And that’s what we’re focused on delivering with our allies.’

Asked whether the UK would support Ukraine’s effort to join the alliance, she said: ‘Well, that is not on the table at the moment, what is on the table is providing Ukraine with Nato-level support.’ 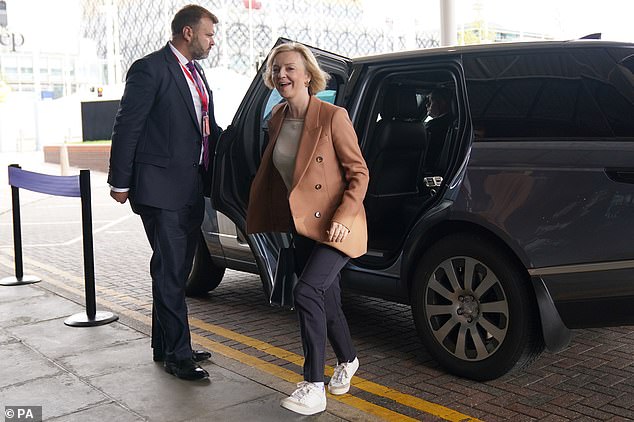 In a separate interview, Ms Truss would not be drawn into an apology for the impact of the mini-budget on mortgage rates.

Asked whether she would apologise to people whose mortgages went up, or who lost their mortgage deals, she told Channel 5 News: ‘I understand that times are very difficult.

‘We did have to act in the mini-budget on energy prices and on taxes in order to deal with very real issues we face, which have been driven by the international situation, by (Vladimir) Putin’s war in Ukraine.’

Ms Truss was pressed three more times for an apology to homeowners, and emphasised the Government ‘had to act’ to help households with energy bills.

On the final occasion, she said: ‘Yes, I understand people are concerned about interest rates. There is a rising global cost of interest rates as a result of Putin’s war in Ukraine. The Government will do all it can to help.’