Britain will need lockdowns until MARCH even with vaccines, Professor Chris Whitty warns – but there are likely to be ‘three or four’ Covid-19 jabs in use by the middle of next year

Britain will remain in some form of lockdown until at least March despite the roll out of coronavirus vaccines, Professor Chris Whitty has warned.

The Chief Medical Officer said not enough Brits will have been inoculated against Covid-19 over the next three months to keep the most vulnerable out of hospitals.

He urged people not to let their guard down now a jab had been approved, saying it would be ‘really premature’ and ‘absolutely the wrong thing to do’.

The scientist warned the deep winter months were already the ‘most difficult time of year for the NHS’ without the added pressure of the viral disease.

Professor Whitty told the Commons Health and Science Committee today: ‘For the next three months, I want to be very clear, we will not have sufficient protection.

‘So the idea we can suddenly stop now because the vaccine is here, that would be really premature.

‘It would be like someone giving up a marathon race at mile 16 – it would be absolutely the wrong thing to do.’

However, the CMO said the UK should have ‘three or four’ vaccines against Covid-19 by mid-2021, raising hopes of returning to pre-pandemic normality by summer. 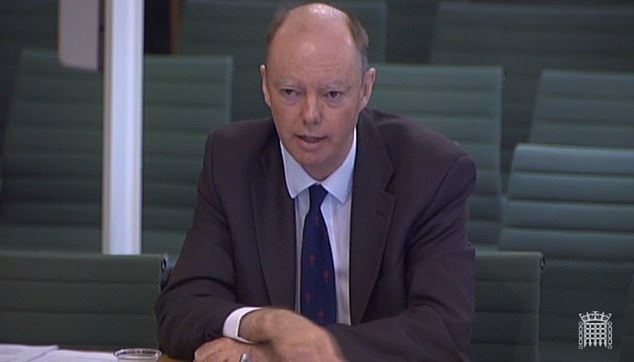 Britain will remain in some form of lockdown until at least March despite the roll out of coronavirus vaccines, Professor Chris Whitty has warned 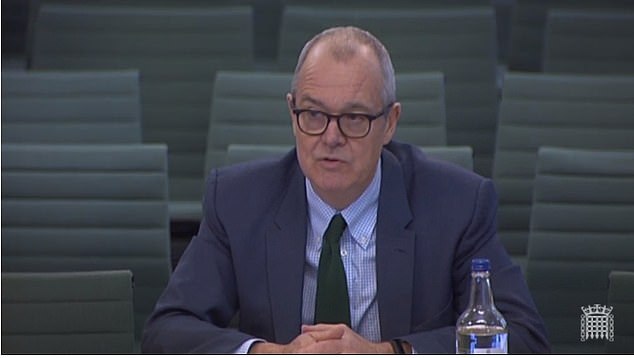 Professor Whitty said around 20 million people are in the first phase of the NHS vaccination programme, including all those over the age of 50, plus healthcare workers, care home staff and elderly people.

He told MPs he expects to have a ‘portfolio’ of several vaccines by the middle of 2021, but advised that the rollout process should still proceed ‘carefully’.

He said: ‘The aim would be to roll out this vaccine and any others that get a licence and are effective and safe.

‘We expect, probably by the middle of the year, to have a portfolio of three or four vaccines which we can actually use.’

However, Professor Whitty said Brits won’t be able to choose which vaccine they have until at least spring next year.

Pfizer’s vaccine, the only one which is currently approved for use in Britain, was shown to be 95 per cent effective at blocking Covid.

Oxford University’s vaccine, expected to be approved in the coming weeks, was found to have about 70 per cent efficacy.

Professor Whitty said that choosing which jab to have would be a ‘very good problem to have’, but not one we will have ‘over the next four months’.

He said it was possible that some people may be better suited to a particular vaccine based on the side effects or if they have an underlying conditions.

‘When it gets to my stage to be vaccinated – and I’m nowhere near the top end of the tiers so it won’t be for a while – I will absolutely have the vaccine when it is appropriate for me to do so.

‘I will either have a choice between having no vaccine or the vaccine that is available for me at that stage, and I’ll be very happy with that.

‘I don’t really have a strong view as to which good vaccine I have, provided it’s safe and effective, which is what the whole (regulatory process) … is there to do.’

Professor Whitty said there would be ‘a steady supply’ of vaccines from outside the UK over the next few months, but that the majority of vaccinations were still not likely to take place until 2021.

‘I’m glad to say that the British public in all four nations of the UK have the services of some extremely good supply chain people.

‘My understanding is there will be a steady stream of these vaccines as the manufacturers can make them and they can be shipped.

‘Even if the AZ (AstraZeneca/Oxford University) vaccine is authorised for use by the regulator, the MHRA, we’re still looking towards next year before we have a significant amount of supply for those two vaccines.’

The CMO was flanked by England’s Chief Scientific Adviser, Sir Patrick Vallance, who warned the biggest threat the country faces was getting complacent about vaccines.

Sir Patrick said:  ‘The biggest risk we face now is that people think it’s all over. It isn’t all over.

‘We have a very important light at the end of the tunnel, but we’re a long way off. It’s not the time to relax things. If that happens we will have a big surge.’

Sir Patrick said there would still be Covid-19 transmission among the population once the most vulnerable are vaccinated.

On when lockdowns could be scrapped, he told MPs: ‘It’s a science-informed political decision.

‘What we’re looking at is exactly that sort of question, as to depending on the effects of the vaccine on transmission, which we don’t know yet, as Chris (Whitty) has said, you would have different models as to what that would mean in terms of the degree of immunity across the population you will end up with, that will be relevant to keeping suppression of transmission versus protecting those who are most vulnerable.

‘Priority number one has to be protect those who are most vulnerable, you can see the effects of that.

‘There will still be transmission amongst others at that point, so we need to be aware of that, and then we will know a bit more as we learn about transmission across the different vaccines, what effect they have.

‘But, ultimately, then there are some decisions to be made about how much risk society wishes to take with that.’

It came as the Medicines and Healthcare products Regulatory Agency (MHRA) gave precautionary advice to NHS trusts that anyone who has a history of ‘significant’ allergic reactions to medicines, food or vaccines should not receive the jab from Pfizer/BioNTech.

Two NHS workers with a history of serious allergy suffered an allergic reaction after receiving the vaccine on Tuesday as the NHS rollout got under way.

Both staff members had a significant history of allergic reactions – to the extent that they carried adrenaline auto-injectors with them.

Professor Stephen Powis, national medical director for the NHS in England, said: ‘As is common with new vaccines, the MHRA have advised on a precautionary basis that people with a significant history of allergic reactions do not receive this vaccination after two people with a history of significant allergic reactions responded adversely yesterday. Both are recovering well.’

The NHS said both people developed symptoms of ‘anaphylactoid reaction’ shortly after receiving the vaccine.

Professor Whitty told MPs that he and Dr June Raine, who leads the MHRA, had discussed safety issues ‘at 11.30 last night’.

He said the NHS and the MHRA are in a ‘very good position’ to pick up ‘extremely rare’ issues with any vaccine once it is in use.

‘The initial process, very importantly, picks up common side-effects – that’s what the big phase two and then subsequently, if they are safe, phase three clinical trials allow to happen,’ he said.

‘But extremely rare but important issues, inevitably you accrue more information over time.

‘The NHS through to the MHRA is in a very good position to make sure that we can pick things up quickly, identifying them, communicate them widely, ensure that we improve practice.’

Boris, blow the whistle on restrictions and let us ALL enjoy our freedoms