Joe Biden WILL attend the Queen’s funeral: US President and wife Jill will attend service at Westminster Abbey on Monday – amid claims world leaders will be BANNED from arriving in London via private jet or helicopter

US President Joe Biden will attend the Queen’s funeral with his wife Jill next week, officials have confirmed.

The head of state is set to go to the service at Westminster Abbey on Monday, September 19, along with dozens of other world leaders.

However, the world’s most powerful politician faces the prospect of being asked to catch a coach service to the venue, after it was claimed attendees will be a banned from arriving in private transport.

Dignitaries will be made to arrive in escorted coaches and ‘because of tight security and road restrictions’, they will not be allowed to use their private state vehicles, it is reported.

Those who decide to go face the prospect of being bussed in from West London on the morning of the service – a reception with King Charles III is set to take place at Buckingham Palace for foreign leaders the night before. 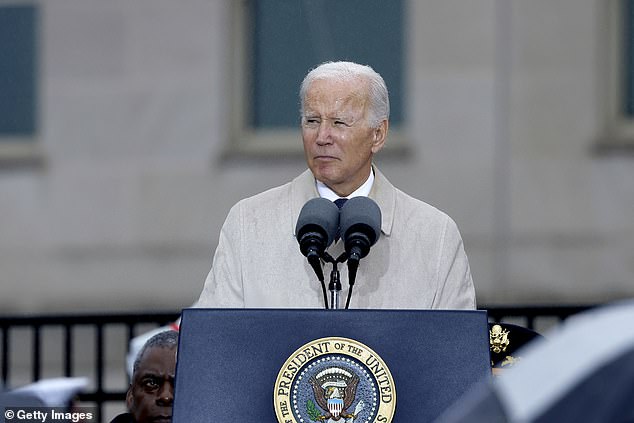 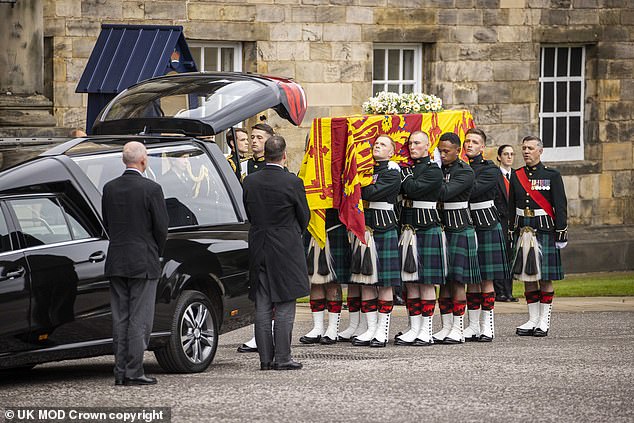 The Queen’s funeral will be held on Monday, September 19, after 10 days of national mourning. Pictured is her cortege arriving at Holyroodhouse in Edinburgh today

According to leaked documents seen by Politico, constraints on space in the historic building mean that only heads of states and their spouses or partners will be invited.

This means Mr Biden and his wife Jill would be the entirety of the US delegation after the White House confirmed today he was planning on attending.

Politico reported that a communication from the Foreign, Commonwealth and Development Office (FCDO) was sent to embassies late on Saturday.

The Department said it ‘regrets that, because of limited space at the state funeral service and associated events, no other members of the principal guest’s family, staff or entourage may be admitted,’ it was reported.

Heads of state unable to attend may choose someone else as their official representative.

According to the document, world leaders have also been urged to travel on commercial flights and have been told they cannot use helicopters to travel around the UK.

‘Multiple and comprehensive layers of security will be in place across London and at all the official venues used for the state funeral and associated events,’ according to a FCDO document seen by Politico.

Meanwhile, the use of helicopter transfers between airports and venues has been prohibited ‘due to the number of flights operating at this time’, it was reported.

Politico said that the document also set out some of the engagements for heads of state surrounding the funeral. 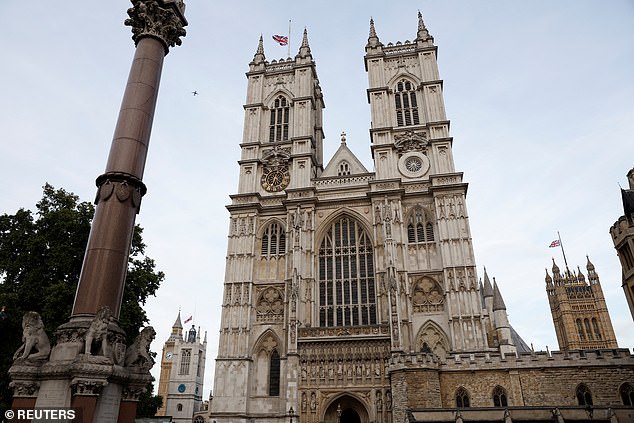 This includes receptions hosted by the King and the new Foreign Secretary James Cleverly, an offer to visit the Queen’s body when it is lying in state and to sign a book of condolence at Lancaster House.

It reported that foreign leaders will be invited to deliver a tribute to the Queen while at Lancaster House, but it can only last up to three minutes.

And ‘because of the extensive ceremonial programme related to the state funeral and the logistical challenges, requests for bilaterals will not be considered on this occasion,’ according to the leaked document.